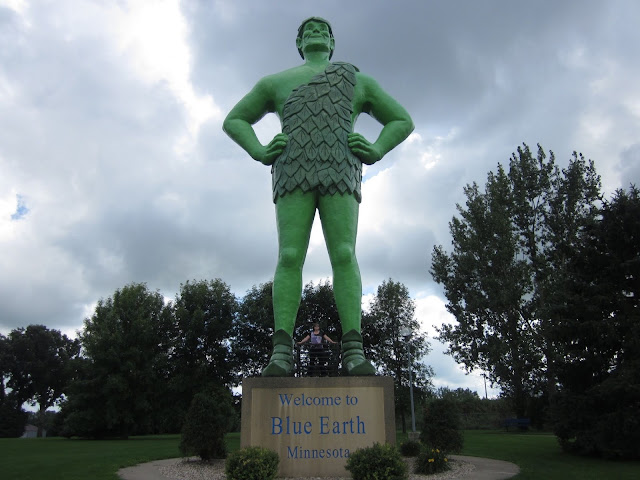 My encounters with Minnesota have been strange, unexpected, random, and fun. My first cross-country road trip brought me to Minnesota's most infamous attraction. A few years later, my comedy group cruised up to Minneapolis to perform in the Twin Cities Improv Festival. A year ago, Mrs. Tires and I encountered a true roadside attraction in Minnesota. The post Minnesota, Part 2 covers my most recent visit, a stadium chasing expedition that brought me to Minneapolis for a thorough exploration. Quirk and enjoyment were abundant during every one of these journeys. So pack the cooler and make a road trip playlist. We're heading up route 94 to Minnesota.

In the summer of 2000, my friend Cein and I were driving his mother's Audi from his old place in California to his new home in Vermont. All his personal belongings were with us. They filled up the trunk. After driving all night through South Dakota, we had a quick snooze in a McDonalds parking lot, ate a Micky D's breakfast, and then headed on to Minnesota. 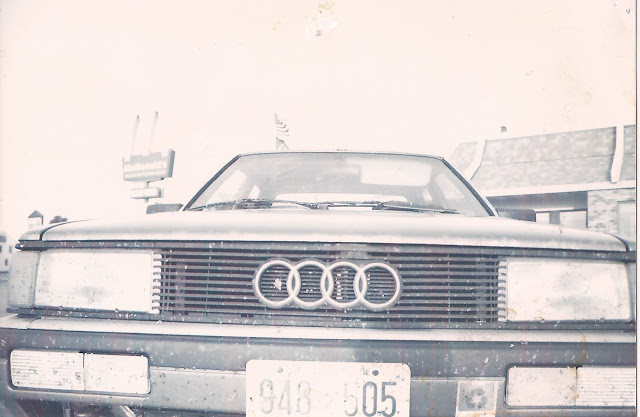 During the previous days of the trip, we had seen many beautiful sights throughout Nevada, Colorado and Utah. By the time we hit South Dakota, we had seen so much amazing nature that it failed to have its full impact. After all that natural wonder, we were ready to get back in touch with the man-made world. Visiting a gargantuan, multi-level shopping mall sounded like the perfect transition.

The Mall of America is the most visited mall in the entire country. Every single retail store you have ever seen in any mall anywhere in America is there. So. Many. Escalators. Food courts-a-go-go. Walking from one end of it to the other is the equivalent of walking several city blocks. And what's more, the mall features several attractions, including a mini-theme park. When we visited, the park was called Camp Snoopy. Camp, it was. It was essentially a Knotts Berry Farm, but even more lame. Amidst the kiddie rides that made up most of the park sat an adult ride, one that I referred to as the Snoopy Axe Ride. It spun riders around in loops and even went upside down. For some reason, it featured the blade of a battle axe at one end. I'm not sure why I didn't snap a photo, but you can see evidence of its existence here.

After a spin on the Snoopy Axe Ride, we hit the food court and then hit the restroom before hitting the road. I could not believe how many urinals were in the humungous bathroom. There must've been thirty in a row. Even the bathrooms were massive at the Mall of America.

We made one more stop in the Twin Cities before heading east. I had just completed my first year at the University of Massachusetts, Amherst, and for some reason, I was considering transferring to a different school. Macalester College in St. Paul piqued my interest, as it had a highly regarded writing program that produced my favorite writer, Tim O'Brien. Since we were in the neighborhood, we decided to swing by and check it out firsthand. Macalester had a lovely campus, and if things had gone differently, I think I would have loved it there.

As it was, I chose not to transfer schools, and instead, I continued on with things at UMass. It's a good thing I did, as lots of great things came from my subsequent years there. The connections I made with the many comedians at UMass were chief among them. Some of those comedians have become life-long friends, including several members of my comedy group Dirty Water. My time with that group included appearances at many comedy festivals. The Twin Cities Improv Festival was one such festival. That brings us to our next stop. 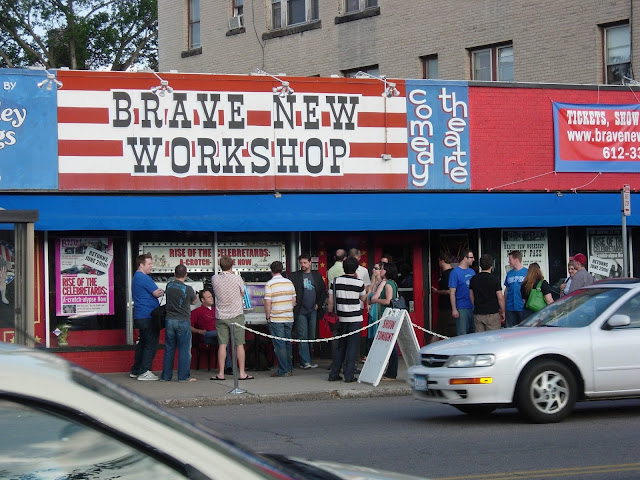 Dirty Water's first appearance in the Twin Cities Improv Festival came in the Summer of 2007. With our performance scheduled for Saturday evening, we had most of the day to do some sightseeing. We were crashing with one of the festival's organizers, and he and his friend suggested we spend the day at the zoo in St. Paul. The rest of the group was set on going to the Mall of America, but I had already been there, so I accompanied our host and his friend to the zoo.

The Como Park Zoo and Conservatory is an impressive one, especially for one in such a small city. Its collection of animals is classic. 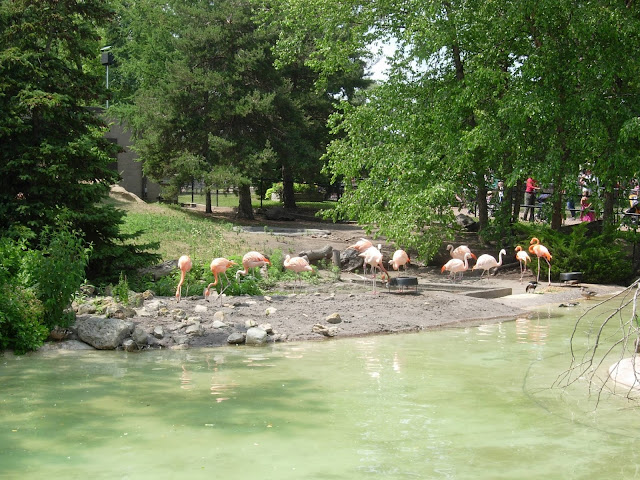 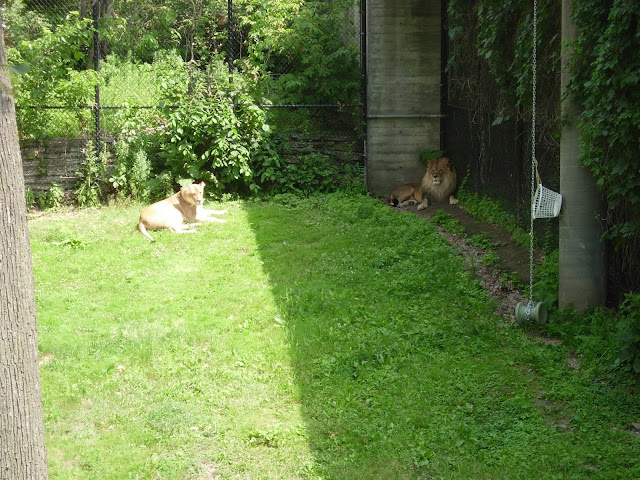 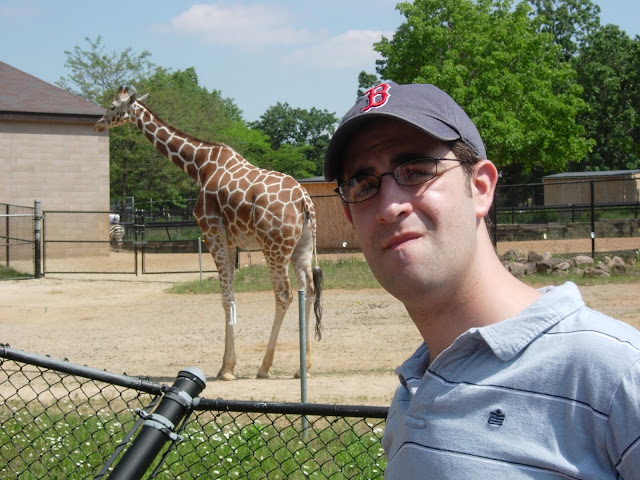 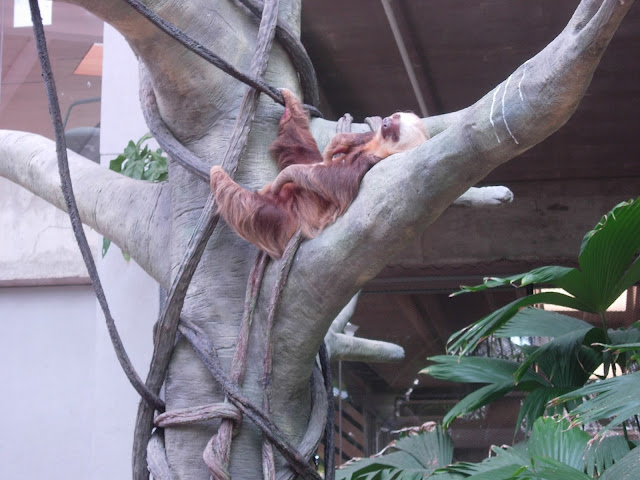 The stuck-in-his-ways polar bear was the most amusing and noteworthy attraction in the zoo. His life involves repeating the same ritual over and over again, day in and day out. The routine starts with some mugging to the crowd, followed by a backflip and a belly-up swim towards the other end of the pool. Then he flips around in front of the glass (where the photos below were taken) and does a deep dive into the depths of the pool before coming back up in front of the crowd, mugging, and doing it all over again. It's very strange that this animal just repeats the same pattern over and over again. He was a lot of fun to watch, and he served as a perfect example of the unexpected sights found in Minnesota.

The conservatory was a great companion to the zoo, and it even overshadowed it in some ways. It had a great collection of exotic plants which were complimented by the intriguing design of the building itself. 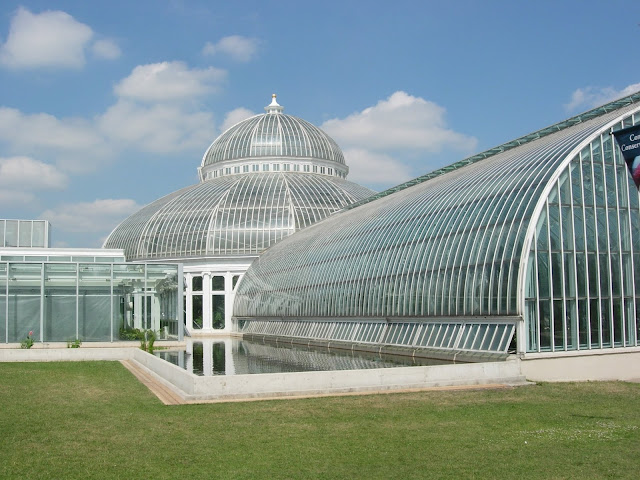 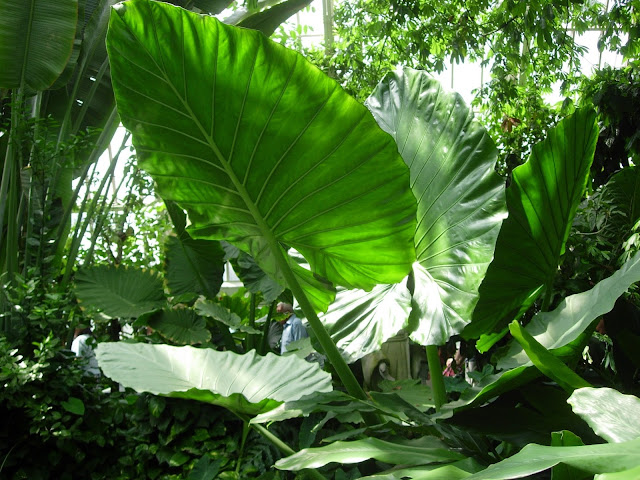 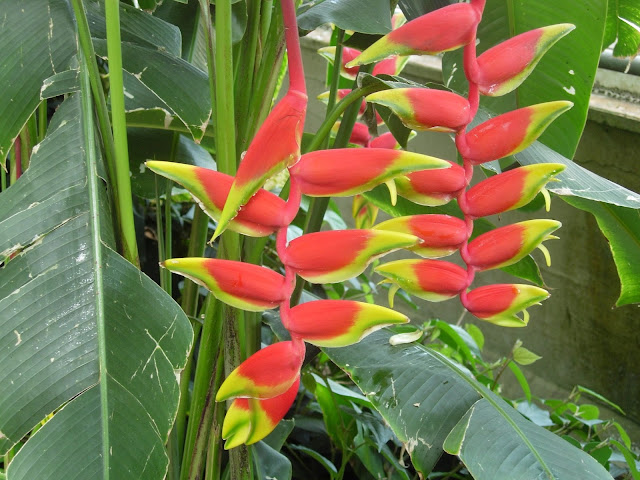 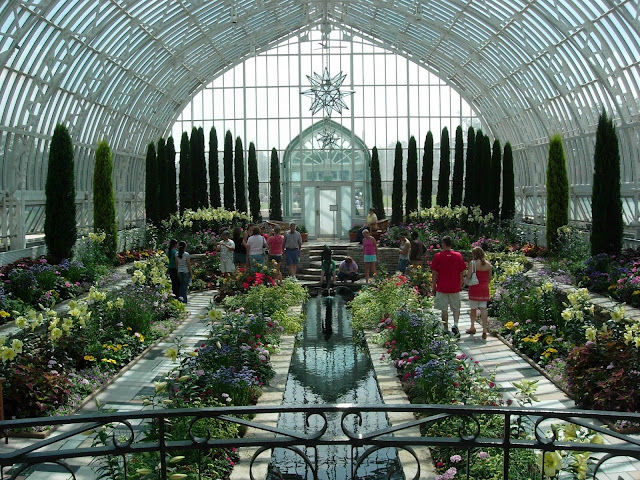 I could have spent a lot more time lingering around the zoo that day, as it had a lot to offer, and the weather was amazing. However, I had to get back and rejoin the group in advance of the show. We had a caper a'brewin.

Dirty Water was an improvised show set in a dive bar in South Boston. To be true to the show's locale, we drank while we performed. It fit with the style of the show, and as an added bonus, it tended to loosen up the tongue and get us to more outrageous places during the latter parts of our sets. This worked out great when performed at our home venue, an actual dive bar. However, it occasionally presented problems on the road. The venue that hosted the festival in Minnesota posed such a challenge, as it was a booze-free theater. The festival had discussed this with us before the performance, and had offered a compromise - they would allow us to drink non-alcoholic beer on stage. While this sounded like a reasonable arrangement, that's just not how Dirty Water rolled back then.

Instead of accepting the alcohol ban, we devised a clever plot. We purchased a case of Miller Lite and a case of O'Douls. Armed with a bottle capper, we ceremoniously emptied the O'Douls, opened the Miller Lite bottles, filled each of the non-alcoholic beer bottles with real beer, and affixed caps to each of the O'Douls bottles.

The great beer caper went off without a hitch, and so did the show that night. No one knew about the beer switch-a-roo, and we were all very happy with what transpired on stage. Hyped up by our performance, we were eager to party after the show. Typically improv festivals offer after-parties for the performers, but because of the no-alcohol rule, the theater wouldn't allow it. It was up to the festival organizers to throw the parties, but unfortunately no one had volunteered to host that year. Not taking no for an answer, we insisted there be some sort of party, and we convinced our host to throw one. He lived in a notorious party house, so it didn't take much convincing, and we made it happen. Again, that's how Dirty Water rolled. The party was a blast and everyone had a great time - including our put-upon host.

It was at that party where we met the keyboardist for the St. Paul Saints. The Saints are one of the most famous independent league teams in all of baseball. They have produced notable major leaguers such as Jack Morris, Darryl Strawberry and Kevin Millar, and they are known for providing excellent entertainment. This includes theme nights, between-inning games, stunts, and give-aways. The keyboardist offered us free tickets to Sunday's game, and we gladly accepted.

The game was a ton of fun. We had great seats, and we were entertained by the hilarious emcee who made lots of references to Jackie Hernandez, the fringy ex-major leaguer and former Saint who was being honored that day. When an opposing outfielder would miss a catch, he'd mockingly say "Jackie Hernandez would've had it." We were also charmed by the train that would zoom by the outfield wall. For some reason, baseball and trains pair well. Our keyboard friend knew we were Red Sox fans, so he introduced us to Dana Keicker, an obscure former Red Sox player, and the announcer for the Saints. We chatted with Dana Keicker in between innings. I told him I distinctly remembered seeing one of his games in person when was a kid, but he didn't believe me. He was a really cool guy, and our meeting made for another obscure encounter in Minnesota. Later, he had the sound guy crank Sweet Caroline, a Red Sox fan-favorite. It was an absolutely gorgeous day for baseball, and we had a really unique and fun experience that perfectly capped off our visit to the Twin Cities.

I returned to Minnesota as part of my road trip with Mrs. Tires that would bring us to Wyoming, Montana and Washington in 2014. After traversing Iowa in an attempt to avoid construction on route 90 out of Chicago, we shot north and found ourselves in Minnesota. The state greeted us with a really cool welcome sign. 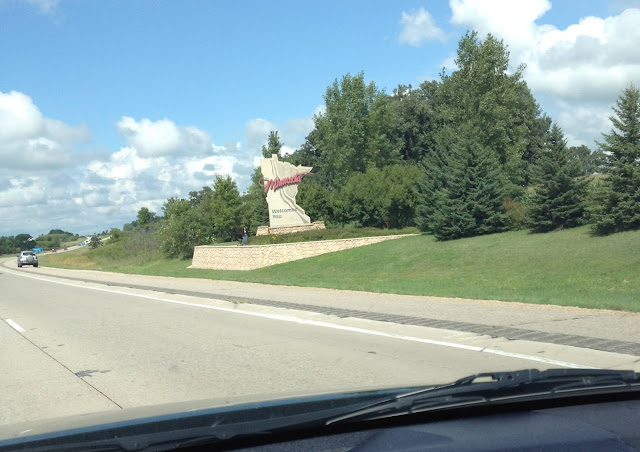 When it was time to switch drivers, Mrs. Tires checked our Roadside Attraction app to see if there was any quirk nearby that might make for an interesting stop. She found a gem. Nearby Blue Earth, Minnesota offered a huge attraction - a fifty-five foot tall Jolly Green Giant. It's a truly random installation that towers over its mostly flat surroundings. The base of the statue features some stairs that make it easy to get up close and personal with the giant. 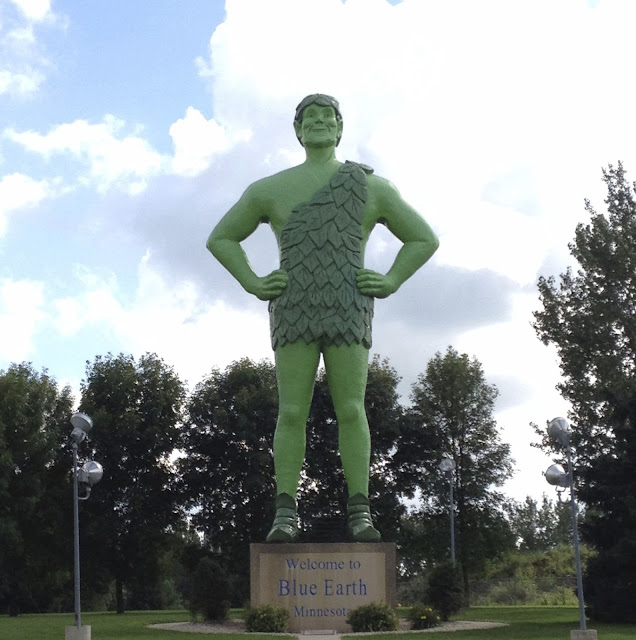 The statue commemorates the packaging plant that used to be nearby. It's accompanied by a few Green Giant-related decorations and a gift shop, which was closed when we visited. 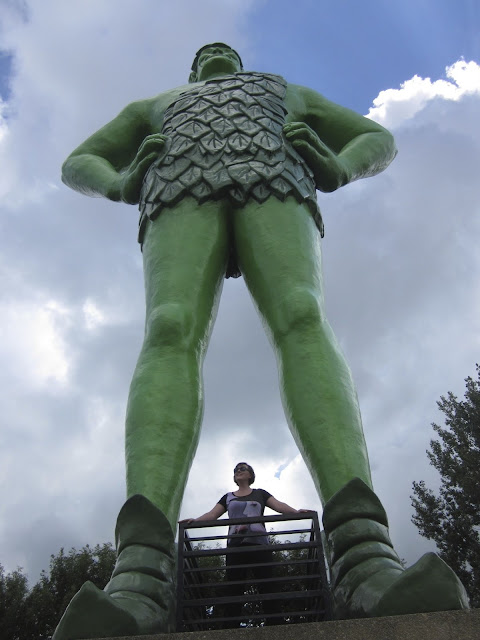 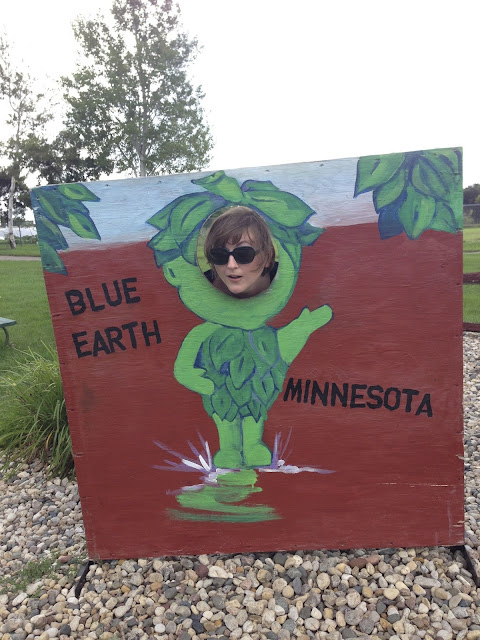 What's more, this attraction marks the midway point of route 90, which runs from my home town of Boston to Seattle, our final destination on the trip. Coincidentally, it also marked the half way point of our drive that day, which started in Chicago and would eventually deliver us to Wall, South Dakota.

There wasn't much near the Green Giant, just a Dairy Queen and a cheese shop. We popped into the cheese shop for a tasting and chatted with the owner for some time before purchasing some dill-flavored cheese curds and hitting the road. The scenery we encountered after our stop in Blue Earth was gorgeous, and it made for a perfect exit scene after another truly random and delightful encounter in Minnesota.

For more on this trip, check out #raymansgowest on twitter.

Check out Minnesota, Part 2
Posted by Unknown at 1:24 PM