My trips to Florida have been no exception. Vacations in Disney World delivered life long memories, and also the most traumatic hotel experience of my life. A spring break trip in 2001 included a stop at a pristine, postcard-worthy beach that we'd have to risk our lives to fully enjoy, and a trip to a fantastic roadside attraction that was built on a bald-faced lie. My most recent visit with my comedy group Dirty Water involved several exciting spring training games interspersed between performances at the worst venue in our history. So buckle up and hang on tight, we're going on a roller coaster ride down I-95 in Florida.

I was fortunate enough to make several family trips to Disney World when I was growing up, and I cherished every one of them. One of my fondest childhood memories is of a voyage on Disney's Big Red Boat, which involved non-stop fun on a giant cruise ship, including some encounters with Mickey Mouse, Donald Duck and company. The cruise was followed by three days in the Disney parks.

Epcot Center has always been my favorite park. I love Spaceship Earth, the ride within the giant silver golfball that serves as Epcot's anchor. The areas dedicated to various foreign countries are also quite enjoyable, as they offer rides, costumes and cuisine from several world nations without requiring a passport. I hope to return to Epcot someday to drink around the world, a practice accomplished by drinking an adult beverage in each represented country.

During one of my trips to Epcot, I played a prototype of a futuristic video game. It involved using a controller that replicated a guitar and strumming to the Aerosmith tune represented on screen. Fifteen years later, the game was released to the public. We know it as Guitar Hero.

Pleasure Island has lived up to its name throughout my life. I have a distinct early childhood memory of whooping it up with my Aunt Betty and Uncle Danny at a can-can club on Pleasure Island when I was six or seven. Aunt Betty's hoots and hollers to the dancers are forever engrained in my memory.

Pleasure Island also hosted the first improv show I ever saw. I was fascinated by the quick wit and spontaneous humor displayed by the performers, and was so impressed with the scenes and songs they came up with off the cuff that I had to try it myself. Improvisational comedy became one of the great passions of my life, and I’d go on to become an improv comedian on a semi-professional level.

The bad news about Pleasure Island is that it is closing and the area is being repurposed. Go figure.

Another early influence on my entertainment career came via a visit to Disney-MGM studios. Though most of my family was ‘meh' on the experience, I absolutely loved it, mostly because I got to participate in the SuperStar Television recreation of Gilligan’s Island. I was cast as the Skipper, which meant going into a real imitation dressing room and then appearing on stage. Disney-MGM is now known as Disney’s Hollywood Studios, but thankfully, SuperStar Television still stands.

Unfortunately, not all of the memories from my trips to Disney are positive. A spring break road trip in 2001 included a stop at Disney World to visit my friend Mike, who was working as an actor at the park. My poor college student friends and I were in need of a cheap place to stay during that visit, and we found a hotel on the outskirts of Orlando that offered rooms for forty dollars per night. After checking in, my friends Beth and Sean decided to do some floor exercises in the room. The scuzzy floors were already turning their feet black, so they pulled the blanket off one of the beds and laid it down on the ground for protection. Upon doing so, they noticed a small insect scurrying across the blanket. When they looked closer, they saw several more. A close inspection of the bed exposed that it was covered with hundreds of tiny spiders. They freaked out.

I assured them everything would be ok, and I calmly went to the office to report the infestation. I communicated my friends' concerns to the large Polish man behind the desk. My unconcerned approach to the situation was altered when the man gave me a shocked and concerned look, disappeared for a second, and came back with keys to a new room. "Better switch rooms," he said, "I think they're crabs."

With that, my attitude flipped upside down, and I freaked out even more than my friends had. We weren't talking the kind of crabs that lived in the ocean here. I ran back to the room and told everyone to grab all of their things, STAT. We packed in a flurry and ran out the door, each of us spazzing out in our own way.

We settled into an infestation-free room, but none of us slept well. We were so traumatized, we kept ourselves awake by scratching imaginary itches all night.

There's a bright side to this experience. In the future, no matter how bad a stay may be, it will never be as bad as our crab-infested hotel in Orlando. 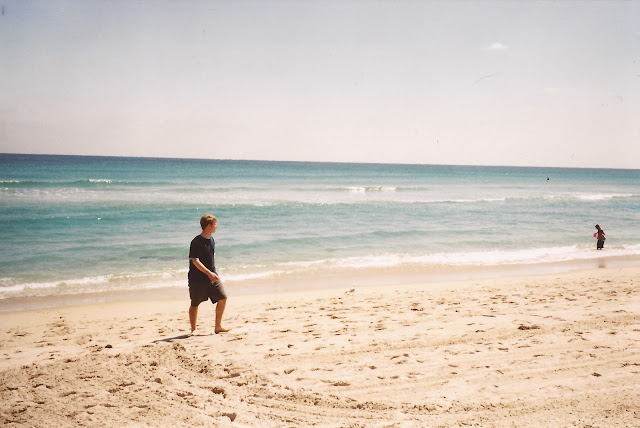 West Palm Beach is gorgeous. My friends Jon, Sean, Beth and I visited during the previously-mentioned spring break trip on 2001, and we were able to squeeze a couple of hours of beach time into our packed road trip schedule. The most memorable moment from the beach was a shark sighting which had everyone scurrying out of the water. At first I didn’t believe the shark was real, so I asked a lifeguard, and he assured me it was legit.

"Cool!" I exclaimed in reaction.

Legend is a funny thing. According to some legends, Ponce De Leon spent his whole life looking for the famed Fountain of Youth. According to a subset of those legends, he made it to Florida during his explorations. And according to an even more obscure collection of those tales, he stumbled upon the Fountain of Youth while kicking it in St. Augustine. This legend upon hearsay upon flat-out lie is the foundation of a delightful and enchanting attraction in St. Augustine called the Fountain of Youth Archaeological Park. This place is so much fun, it makes visitors forget its total lack of validity.

My friend Jon and I checked out the park during our spring break trip in 2001, and we got a first-hand look at the river that supposedly contained the Fountain of Youth. The guided tour included a dixie cup full of water from the river. As implied by the postcard at the beginning of this post, the water is supposed to make those who sip from it young forever. So we've got that going for us! It tasted like copper.

The whole area that surrounded the alleged Fountain of Youth was really cool. It featureed exotic flora and the occasional peacock. We only had time for a quick stroll through the grounds. I'd love to return and explore the park further. 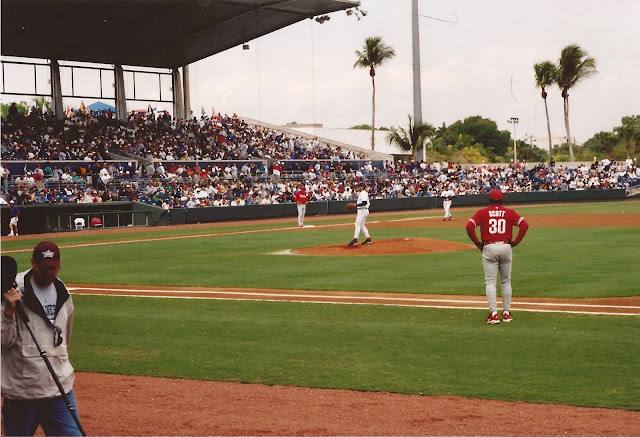 If I'm going to Fort Myers, it can only be for one thing - Red Sox spring training. The annual kickoff to the baseball season occurs in February and March of every year and involves several exhibition games between major league teams as they prepare for the upcoming season. The games are casual and fun, and the atmosphere is further enhanced by the beautiful weather. The Fort Myers public address announcer loves comparing the day's weather to the concurrent temperature in Boston, with Florida boasting temps in the 70s and 80s while Boston temps are in the 30s and 40s. Players are more accessible to fans during spring training, and can often be spotted signing autographs. One year I witnessed Manny Ramirez and David Ortiz offering their signatures, and the entire stadium seemed to be flocking toward them. 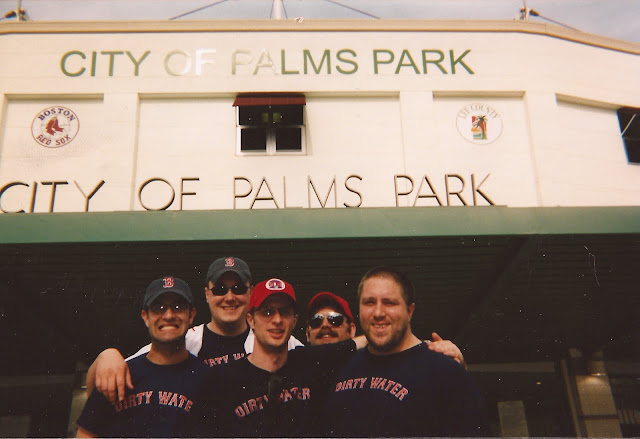 My Boston-themed improv group Dirty Water attended spring training in 2007. We were performing at the nearby Foxboro Sports Tavern, a Boston-themed sports bar, so we went to the Red Sox spring training games to market our show to Red Sox fans.  The games were fantastic, as we witnessed the early version of the team that would go on to win the World Series that year. In an unexpected twist, my friend and fellow troupe member Adam had the credentials to work at the stadium. While we spread the word about our performances, he was working the stands as a beer vendor. This meant we had our own personal beer salesman when it was time for a cold one.

Unfortunately, the shows at the Foxboro Sports Tavern didn’t go so well.  The owner who booked us was really excited to have our show at his bar, but when we arrived, he was nowhere to be found. We were greeted by his evil brother, the co-owner of the establishment. It was clear the evil one wasn’t too keen on us being there, as he was a total dick to us the entire time. Furthermore, the venue was completely unequipped to host a show like ours, and we spent more time working through tech issues than we did entertaining the patrons. As if that wasn't enough, the evil brother tried to terminate our agreement after the first night. It was an ugly and unfortunate experience that left a bad taste in our mouths for years.

There's lots more to explore in Florida. I'm wondering what highs and lows await me as I check more Florida destinations off my list. Will I be attacked by an alligator when explore the Everglades? Will Miami steal my hard earned money by taxing me like crazy when I visit the publicly funded Marlins Park? Will my skin burn off in the scorching sun in Miami?

For now, I've got some great memories to hold on to when I think of Florida...even if they're tainted by sharks, lies, ass holes and crabs.

Must See in Florida: