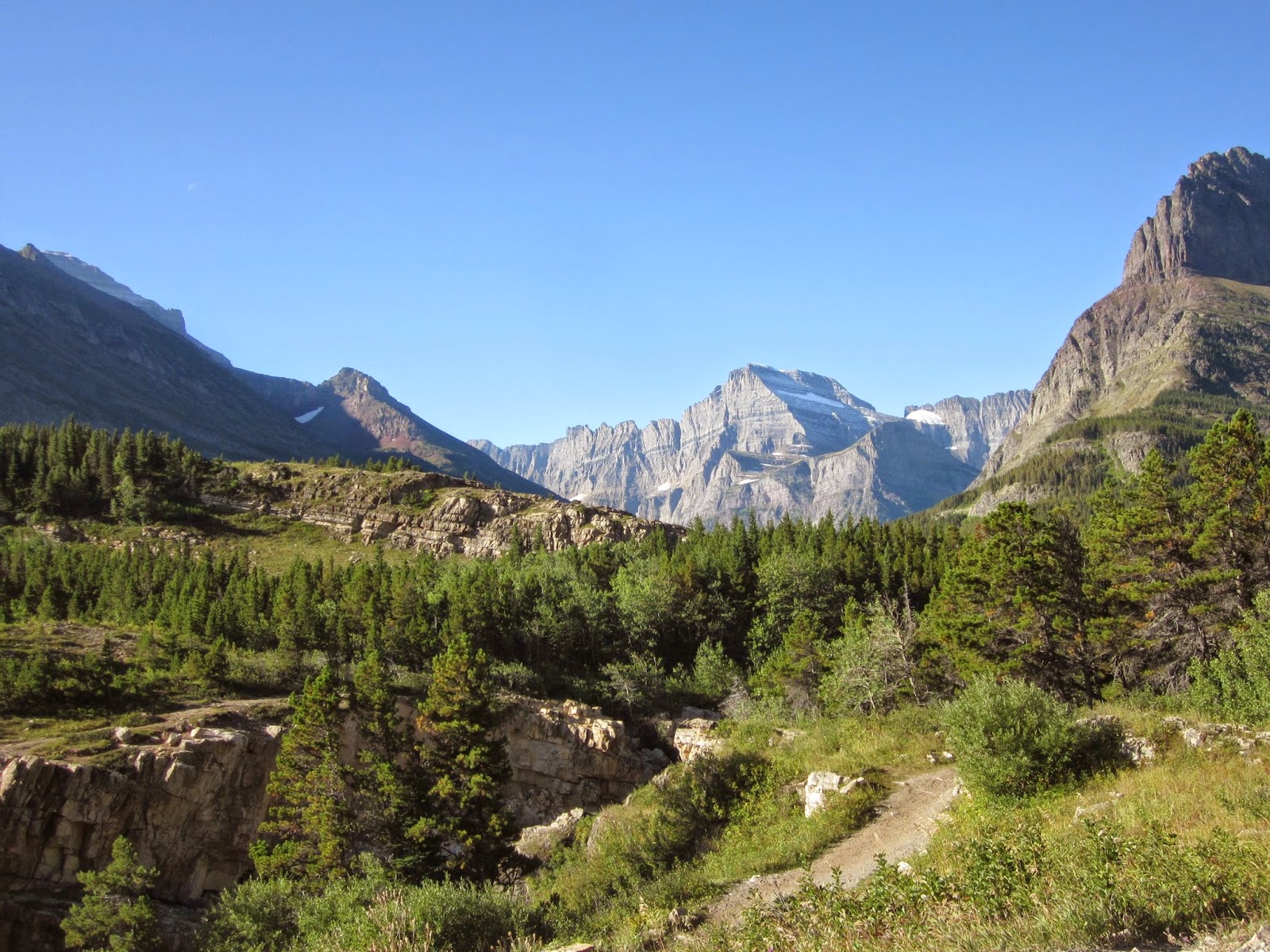 I had the pleasure of visiting Montana during my most recent road trip with Mrs. Tires in September of 2014. We had just visited the Badlands and Yellowstone on our way to Montana, with Seattle as our ultimate destination. The day of our arrival in Montana had been circled on my calendar as potentially one of the best days of the trip. The plan was to wake up in Yellowstone and say good night in Glacier National Park, two places of amazing natural beauty that we had been planning to visit our whole lives. On top of that, the direct route between the two is US-89, a state highway known for great views and a bit of quirk.

After saying goodbye to Yellowstone and filling up the cooler at a local grocery store, we were on our way. The scenery was already impressive as we drove through southern Montana. 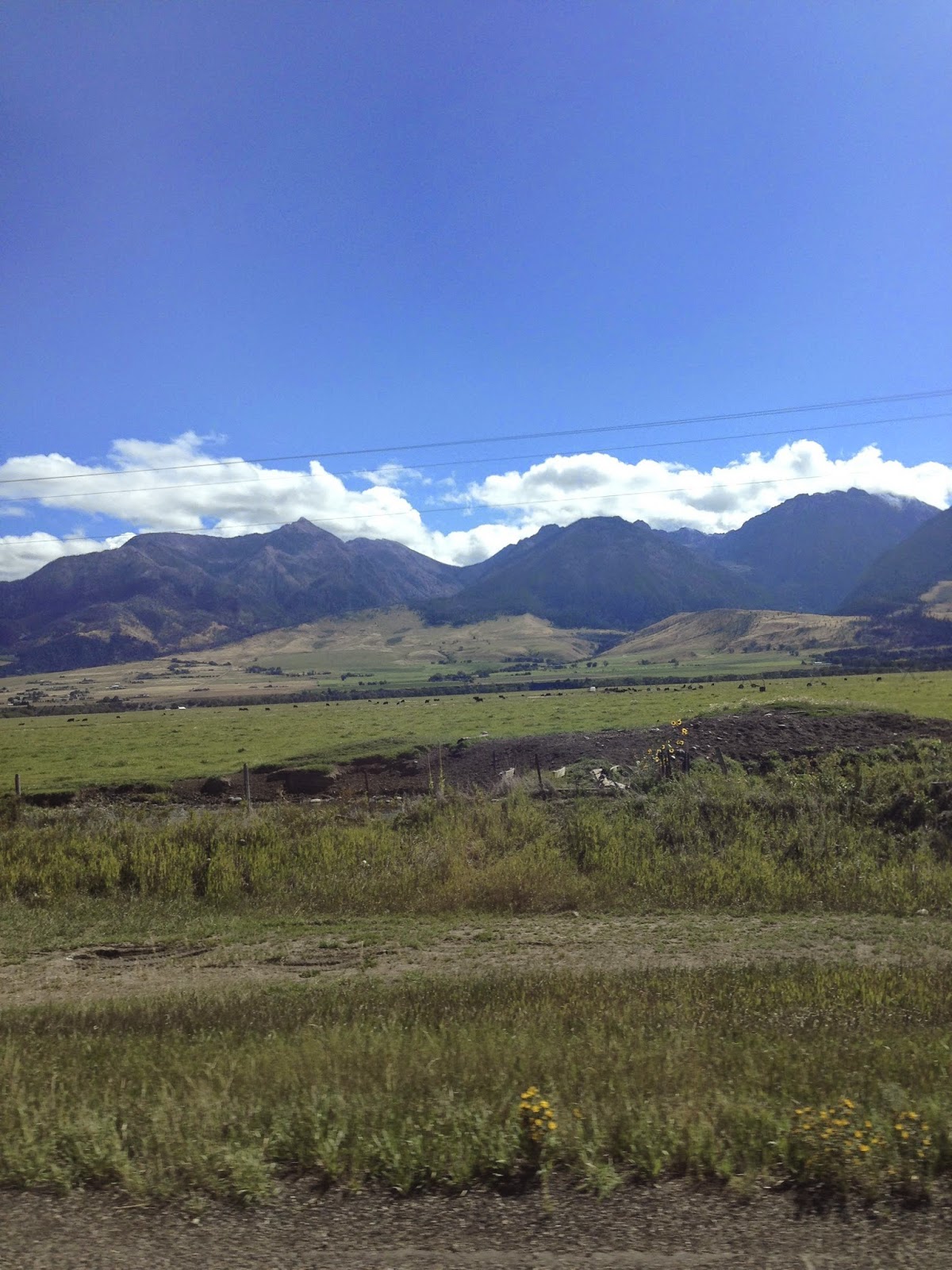 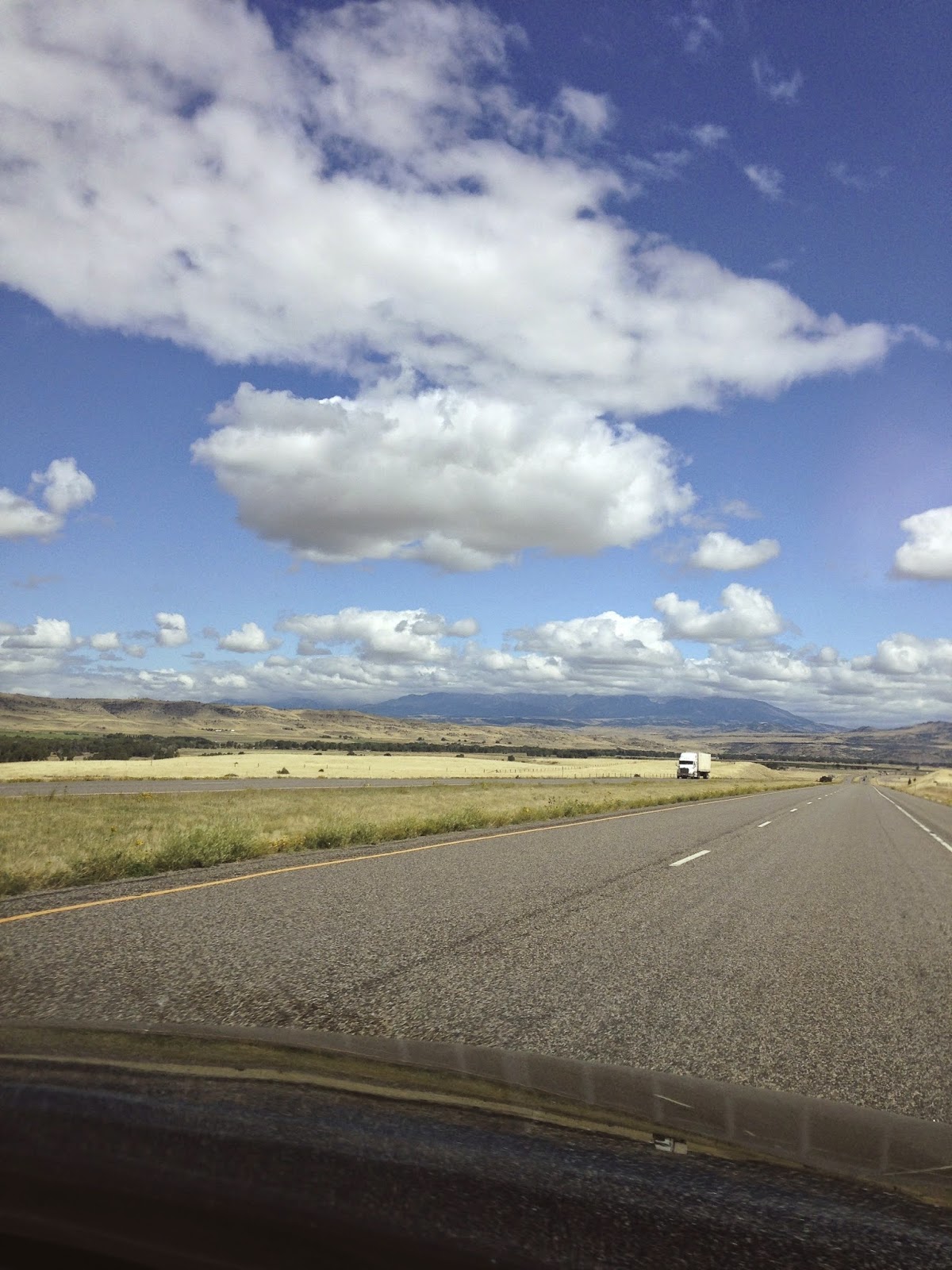 For the entirety of the trip up to this point we had stuck to our plan of eating all our breakfasts and lunches out of the cooler. We broke from that pattern while driving through Montana and went to lunch at a roadside joint called the Branding Iron Cafe in White Sulphur Springs. The whole place struck us as odd when we first arrived. In hindsight, I think it was because we weren't prepared for the more laid back approach to dining, where the waitress takes twenty minutes before greeting you and then wants to talk for another ten before taking your order. That definitely clashed with what we had come to expect after living in a major city for ten years. We adapted quickly, mostly thanks to the delicious food. I can still taste the hot and crunchy fried chicken sandwich with bacon. Yum!

After lunch, our route took us through the heart of White Sulphur Springs. There's a big meth problem there according to this odd wall mural PSA. 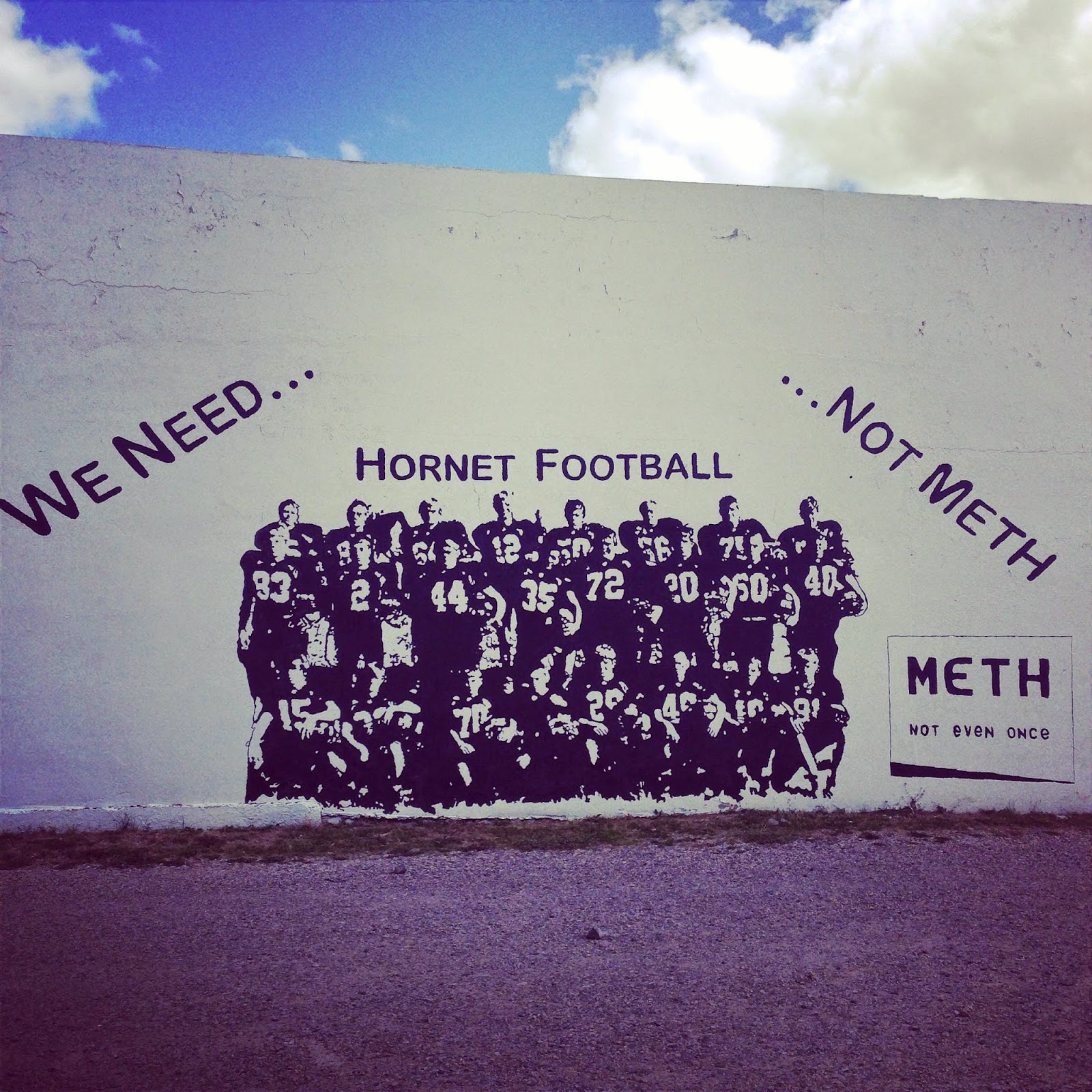 With this strange Montana town in the rearview mirror, we continued north on US 89, which took us through Lewis and Clark National Forest. The scenery in Montana was already impressive, but it hit another level while Mrs. Tires drove us through. 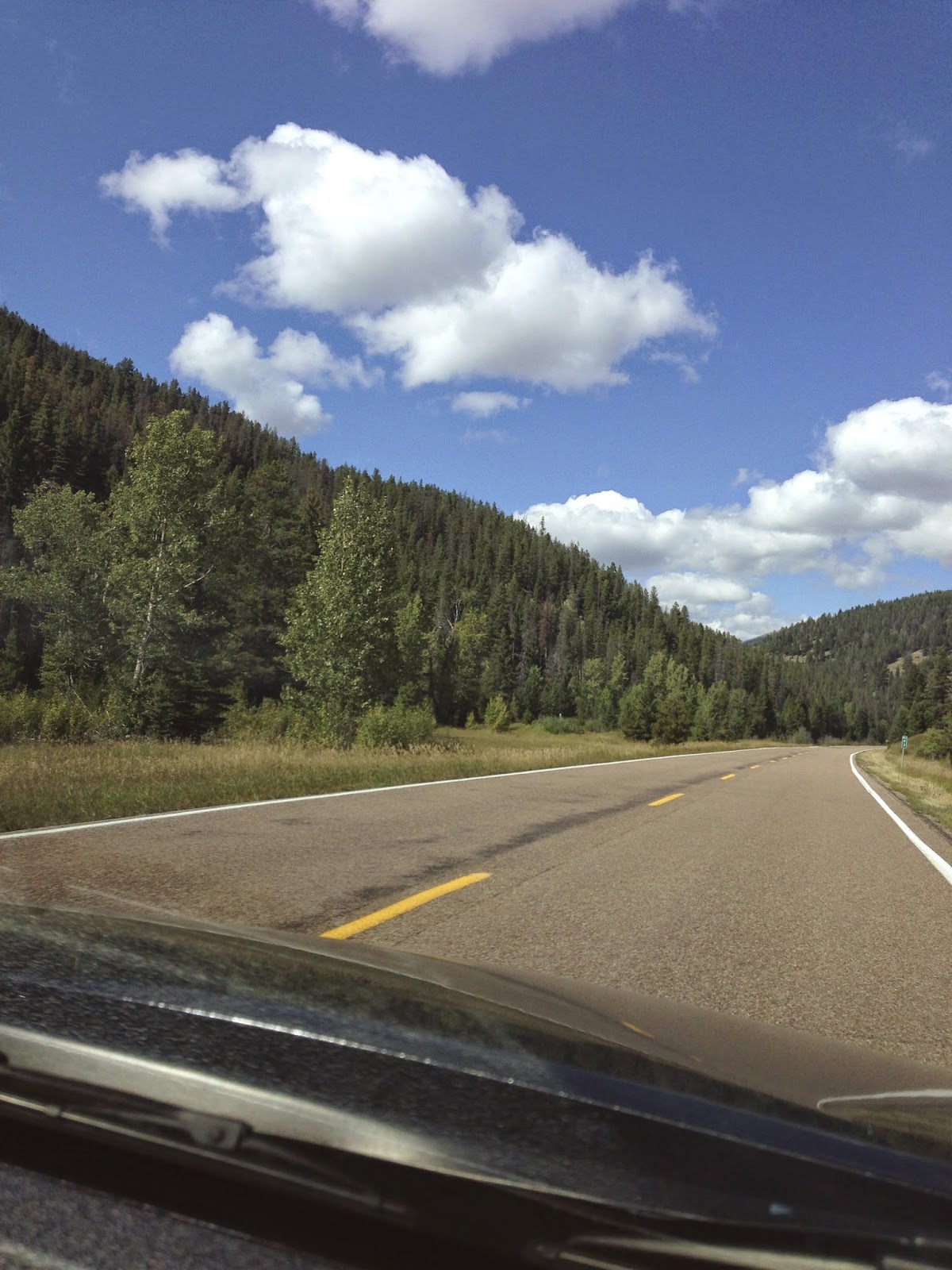 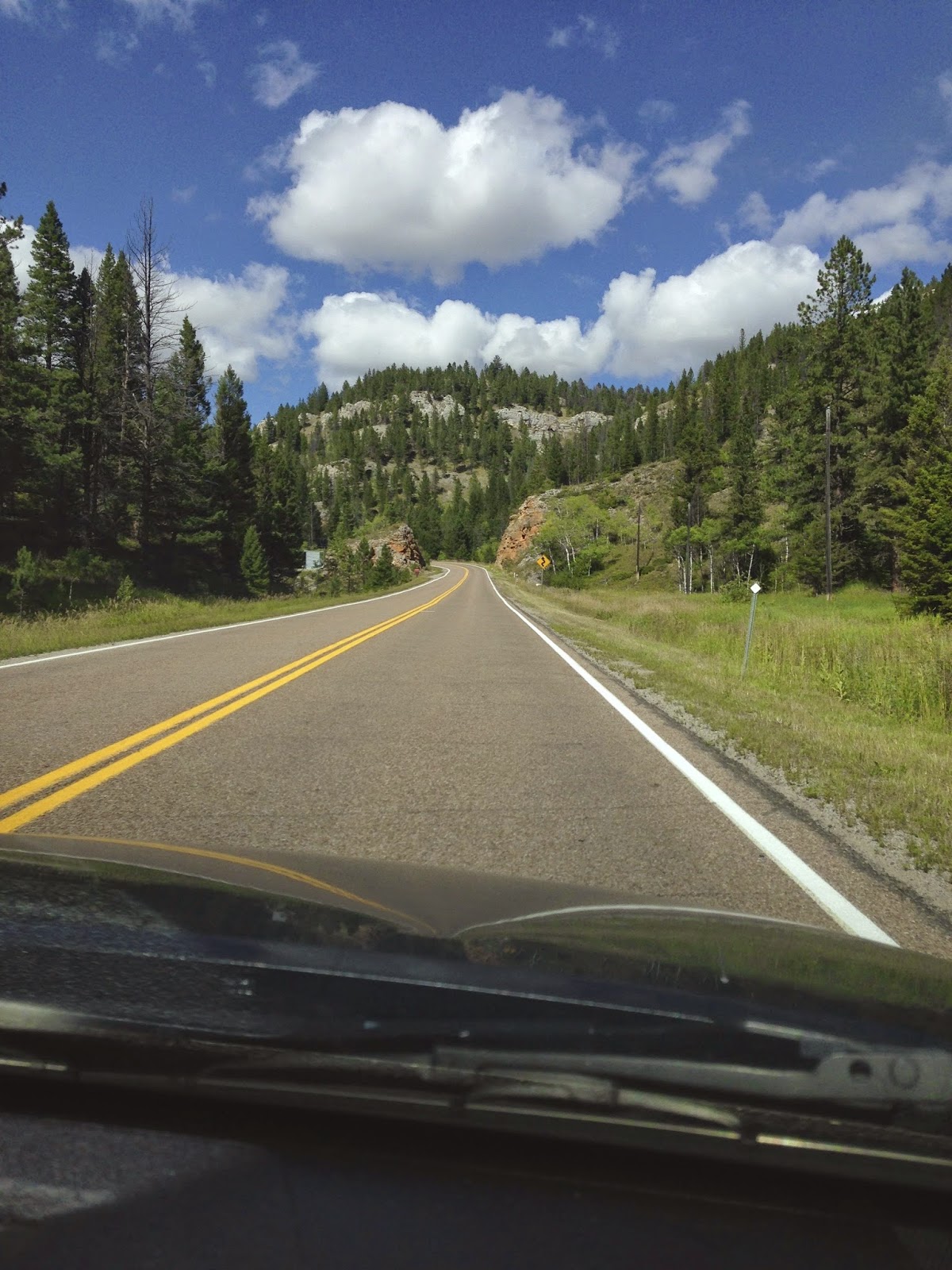 TRAVEL TIP: Drive through National Forests as often as you can while on the road. They have views akin to those found in national parks, and they make for great cruises. This was the second one we had encountered on the trip, having been enchanted by the Black Hills in South Dakota just a few days earlier.

Once we made our way through the forest, we decided that Mrs. Tires had fulfilled her driving duties and it was time for a swap. Our Roadside America app came in handy here, as it directed us to Great Falls, MT. I hadn't heard of this town before, but it's a decent-sized city that provided a quick reemergence into civilization. The Sip and Dip Lounge was the highlight of our pitstop. This bar shares an intimate relationship with the adjoining hotel, as giant windows behind the bar give patrons a direct view into the depths of the hotel's pool. On halloween many years ago, a waitress at the bar dressed up as a mermaid and took a dip in the pool for the amusement of the bar-goers. It was a big hit that grew over the years. Now there is a mermaid show there every night at 8:00 PM. Unfortunately it wasn't much past 3:00 when we were there, so we missed it. However, we did get some amusement out of the video poker in the bar, winning $18.65 on a $5 bet. 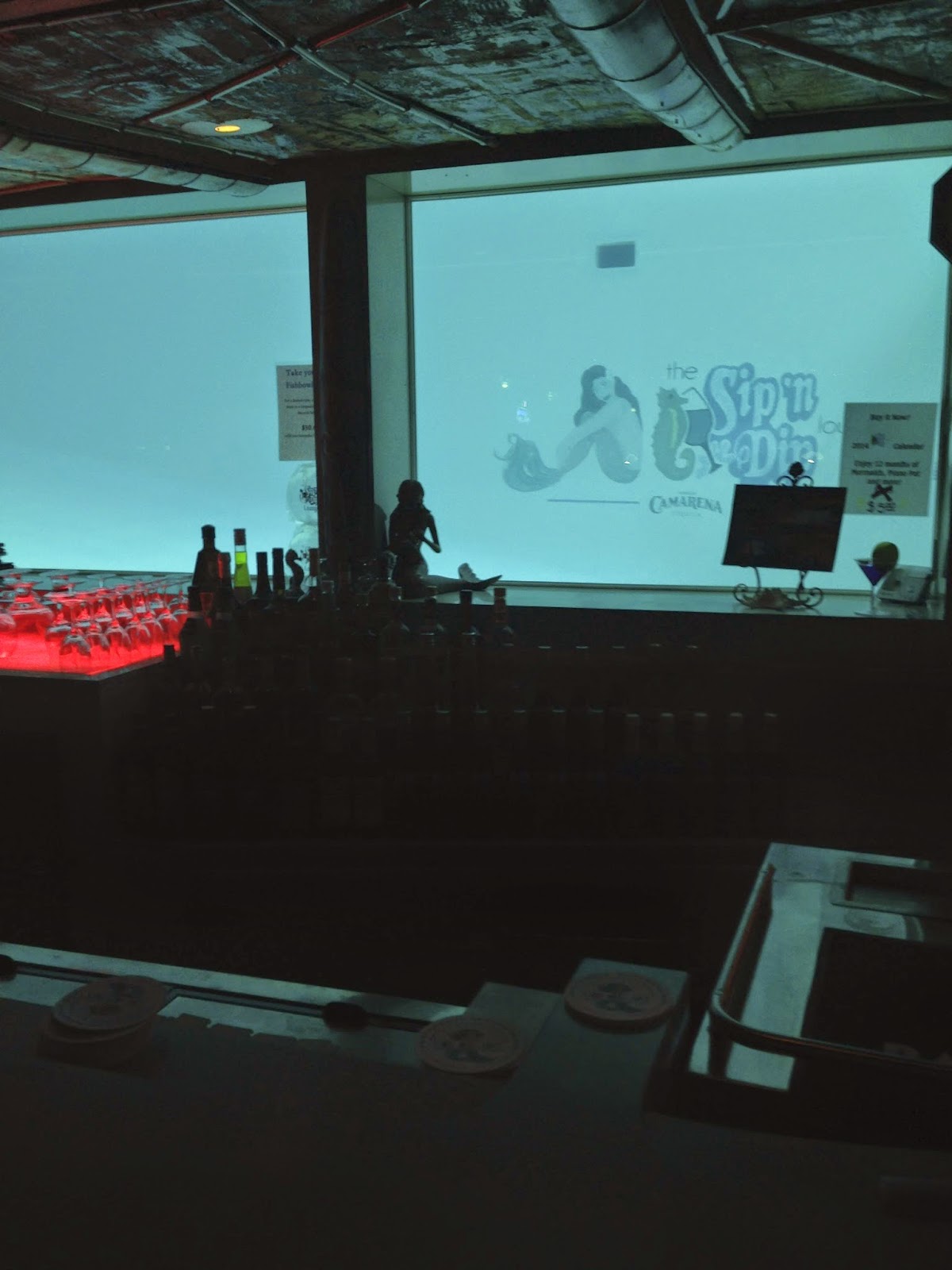 Back on the road, we knew we were getting close. The shrubbery was becoming less yellow and more green, and the snow-capped peaks of the Rocky Mountains were coming into view. We also passed many buttes. The mood in the car was quiet and contemplative as we cruised on.

These open and increasingly impressive views were broken up by the occasional town, a few of which featured some sort of dinosaur attraction. Many dinosaur skeletons have been found in this area, and there were many tourist stops that would trade you good clean money in exchange for a peek at the findings. It was getting late in the day so most of them were closed by the time we cruised by. We were content to snap a few photos of the dinosaur statues used to draw people in. 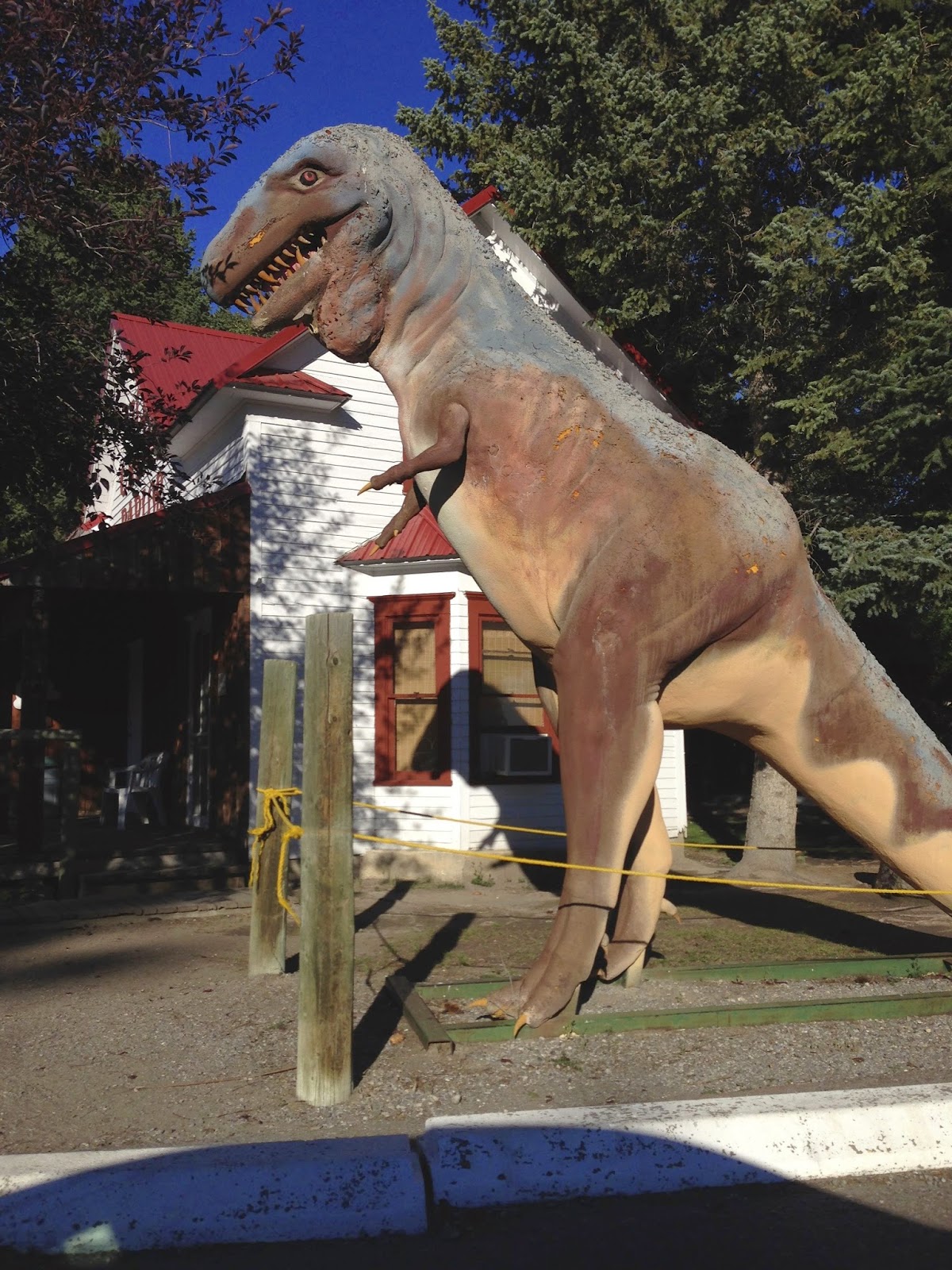 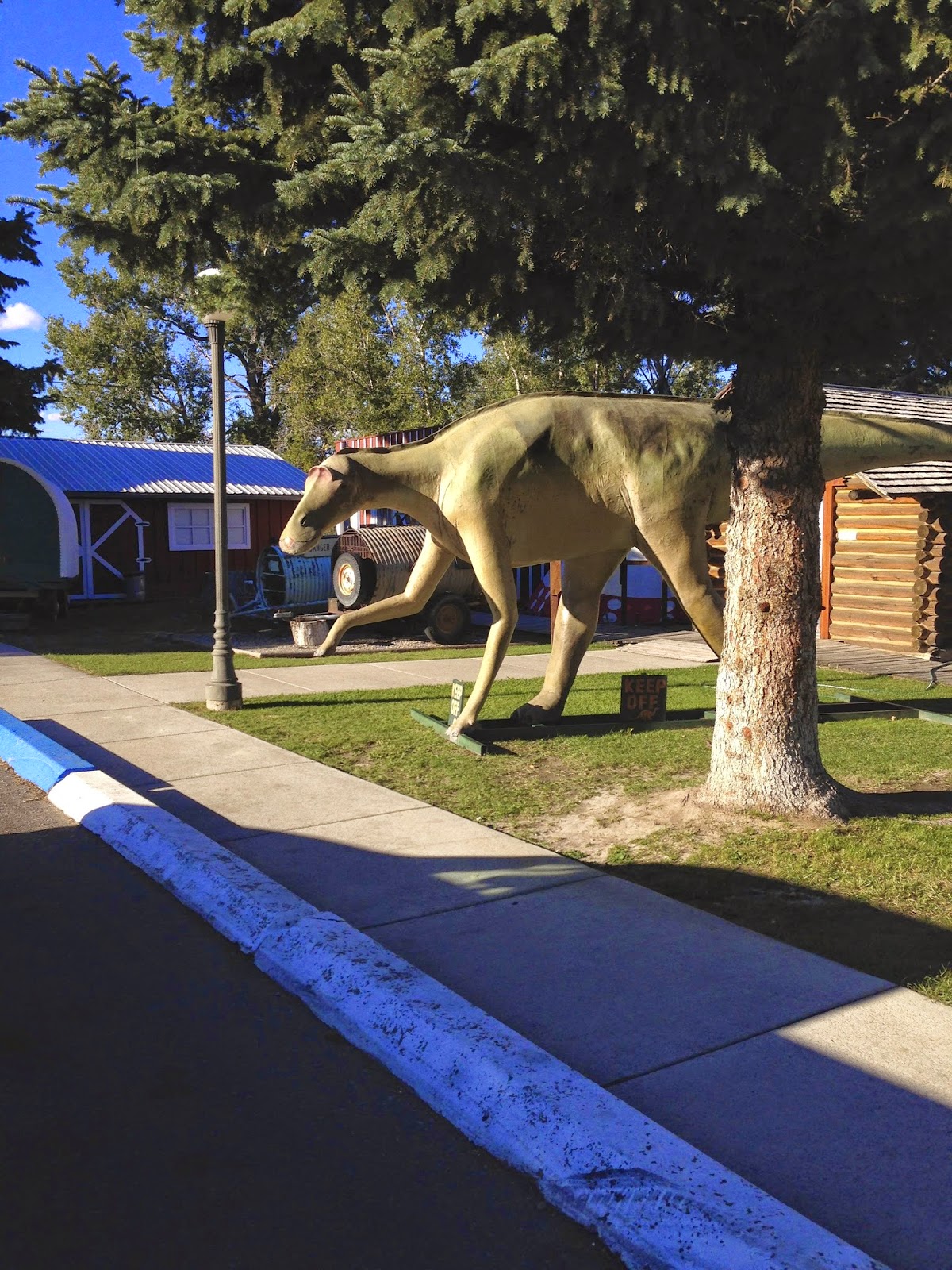 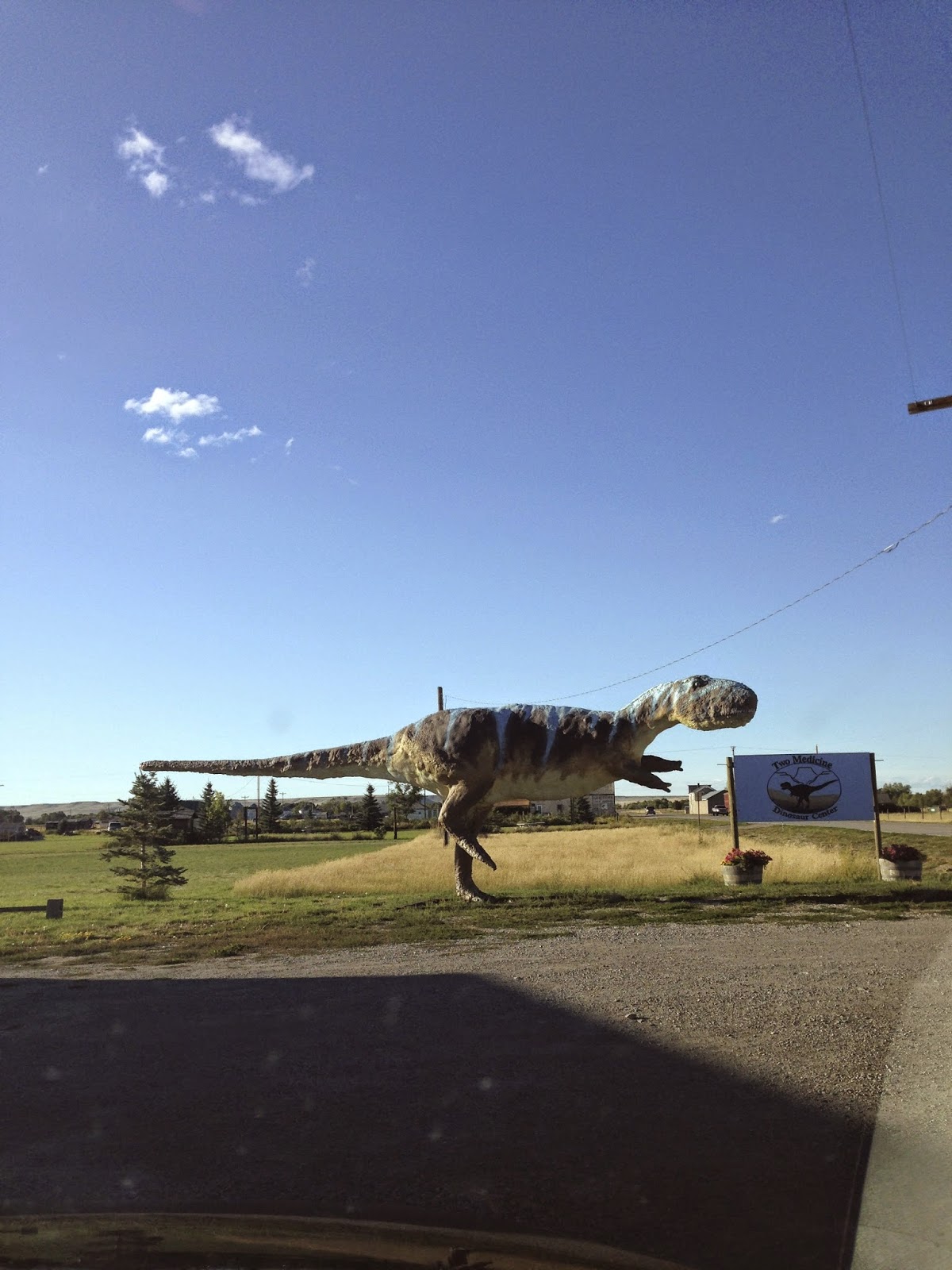 We were really getting close now, the day was getting late, and we were getting more and more excited to reach our destination. Just one more stop for gas before entering the park. We pulled up to a gas station, and as I got out of the car to pump, I was stunned by what I thought was our first Montana wildlife sighting. A wolf, right here at the gas station! Or...wait...was it a wolf? Or was it just a huge, nasty looking dog? Oh wait, there are three of them. No other customers seem too concerned. I guess they're dogs after all. Apparently letting these mangy creatures roam free is a part of the culture of the Blackfeet Indian Reservation. Relieved but still spooked, I stood on guard as the gas pumped and then we hightailed it out of there. From our big city perspective, Montana was turning out to be a very strange place.

After surviving the wolf encounter, we finally made it to Glacier National Park at dusk. We were immediately struck by the grandeur of this place. Tall trees of all kinds gave way to much taller mountain tops, which were visible in every direction. Some were grey and craggy while others were topped with beautiful heaps of snow. We'd later observe that these peaks looked different depending on how the sun hit them, including some that showed a distinct shade of red in the later hours. Interspersed among the mountains were pristine lakes with reflective surfaces and emerald green tints, which we learned were the results of runoff from the glaciers. We were determined to get to our cabin by nightfall so we only had time to stop and stare a couple of times on the way in through the Many Glacier area. Clearly we were in for an amazing experience over the next three days. 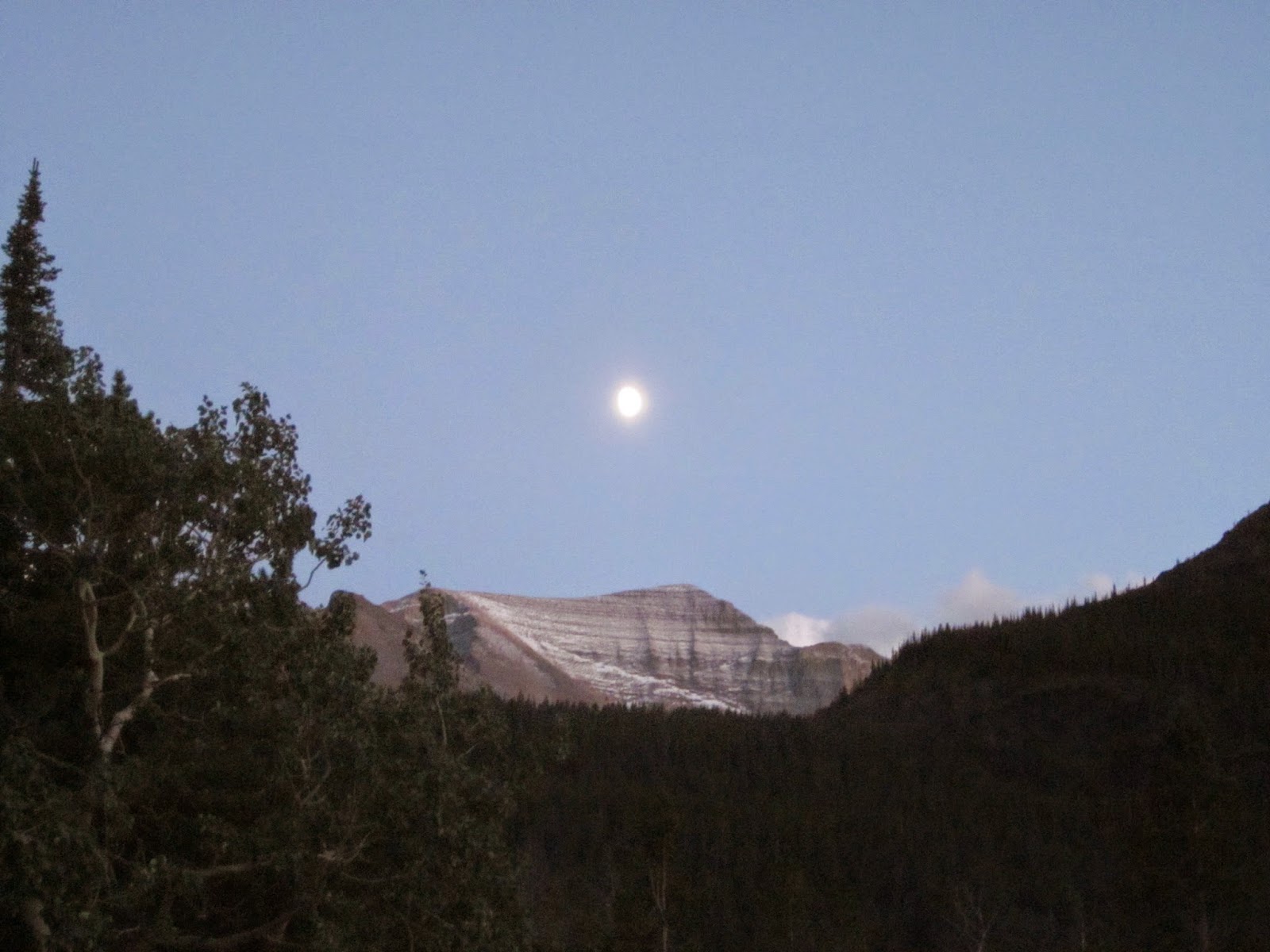 Darkness was just settling in when we got to the Swiftcurrent Cabins. During the process of checking in and navigating to our cabin, we realized our accommodations here were much more rustic than they were in Yellowstone. The cabins were smaller and older, the signage was much less prominent (we got lost twice while going from the main lodge to our cabin, a two minute walk), and walking from place to place meant navigating pine-needle laden dirt grounds instead of the paved paths we used to navigate our lodging in Yellowstone. This was a welcome change for us, as we had felt a small part of the experience had been lost among the comparative luxury Yellowstone offered.

After unloading the car, we made our way to the dining hall. As we enjoyed our pizza and a couple pints of Moose Drool, we eavesdropped on a conversation between another couple and a GNP employee who was reliving his many encounters with bears over the years. It was clear that even those with significant experience in the park could get in some serious trouble with bears, and the only surefire way to protect yourself was to use bear spray. We had balked at the need for it because of the $45 per bottle price tag, but decided after hearing these stories that we'd bite the bullet and get the spray. Thankfully we never had to use it. If anyone is going to Glacier, let us know. The bear spray is all yours.

We decided to let loose a bit after dinner and have a few more beers and laughs. This ended up being a late but joyous night. We were both ecstatic to be at this gorgeous destination, as we had been looking forward to it for many years. This photo says it all. 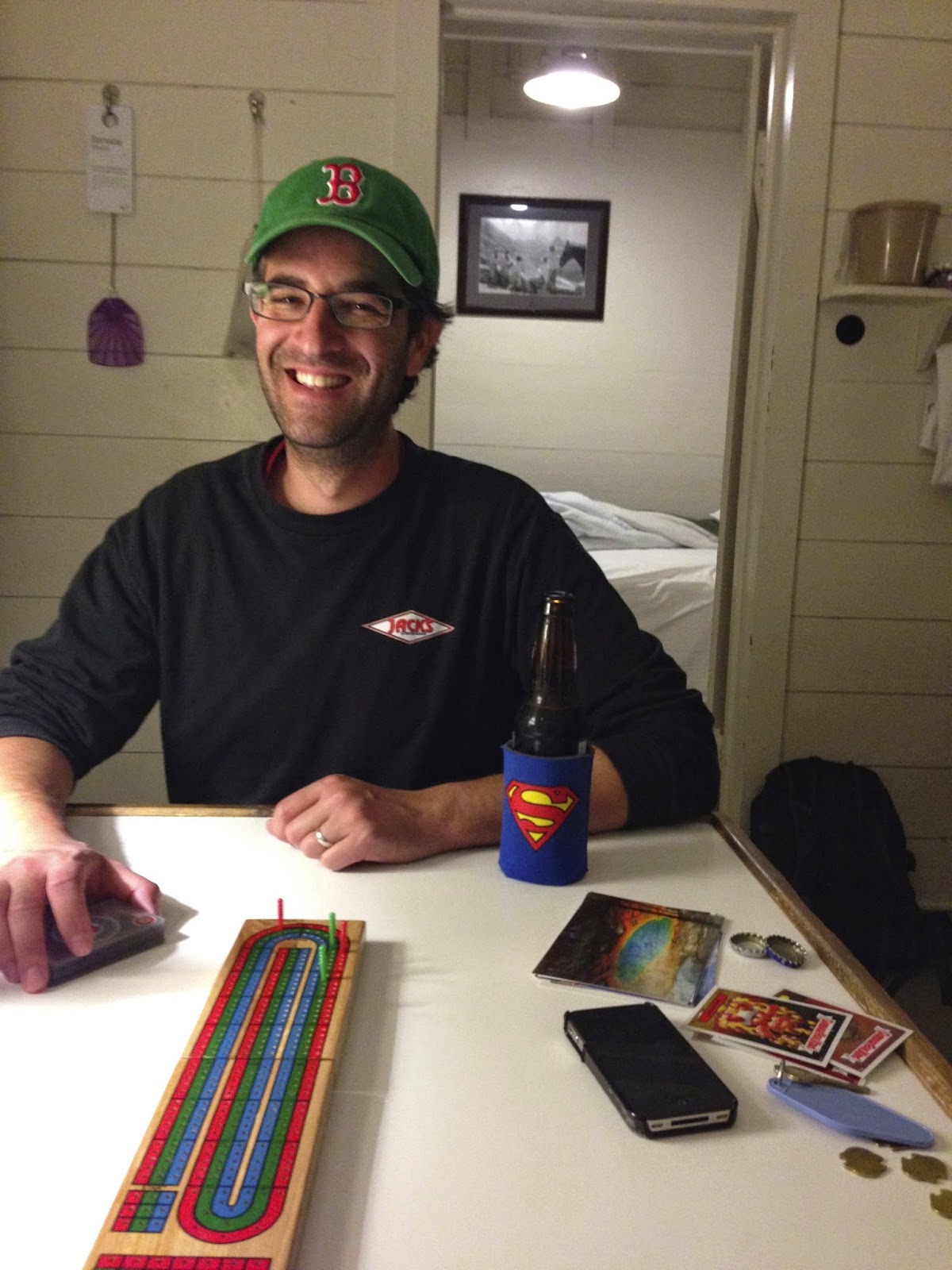 Montana had already proven to be a beautiful and unique state, and we were just getting started, with a three-day stay at Glacier ahead of us. We were in one of the most majestic areas of the Rocky Mountains, so it's fair to say it would be all uphill from there.