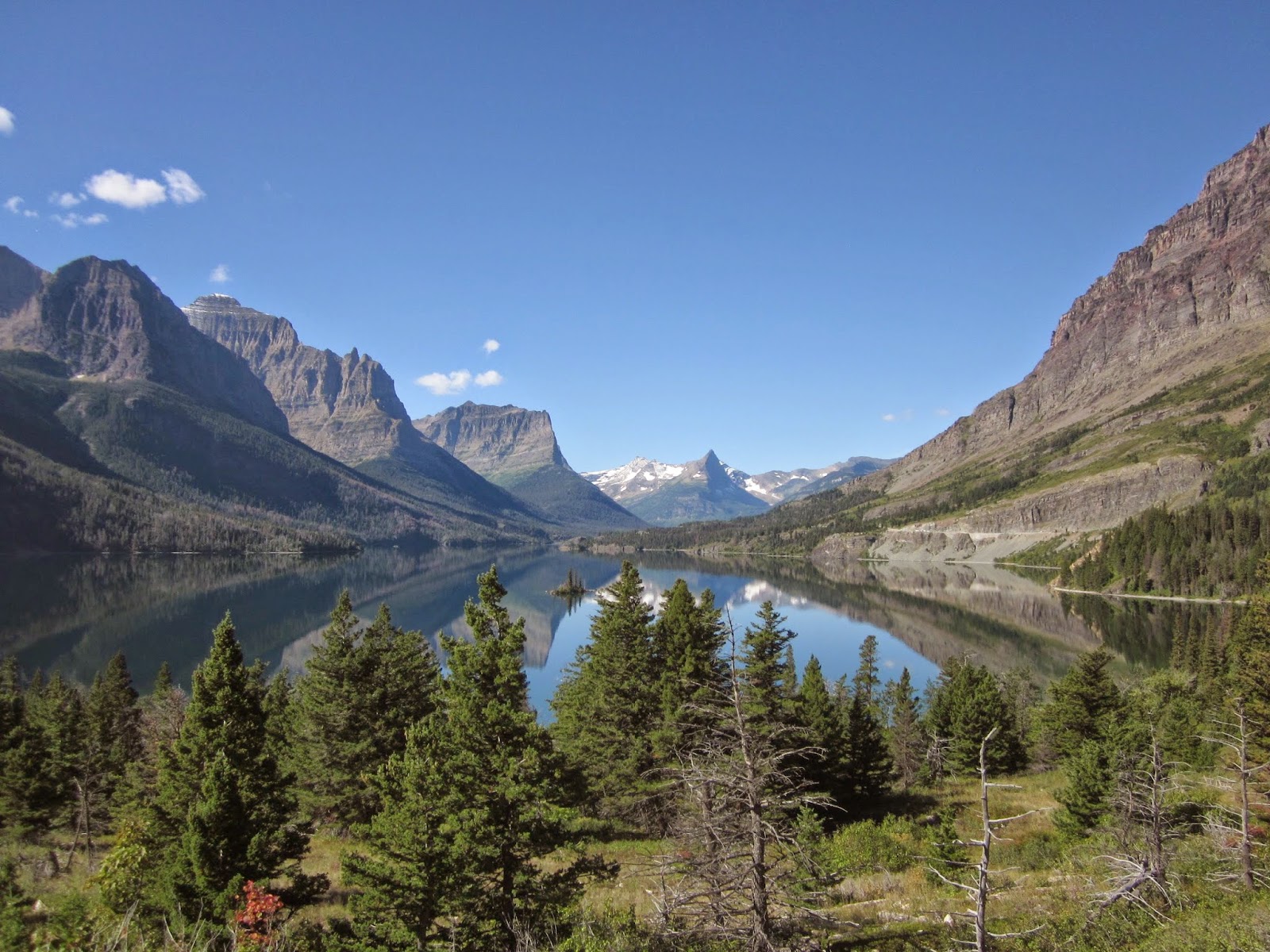 Glacier National Park is part of the Rocky Mountains, which could explain why our first full day there got off to a rocky start. Or maybe it was the drinking the night before. That might make more sense.

For whatever reason, the morning of day two in Montana was a rough one. We woke up freezing cold. It gets down into the 30s at night, even in September, and we could see our breath as we poked our head out of the blankets. The hike to the shared bathroom was also rough due to the cold, and was heightened by the bizarre shower system that required tokens. Those who know me well will be impressed to know that I was able to complete my shower before hitting the time limit imposed by the system. After packing our gear for the day, we drove over to the main lodge to get some quick supplies. When we left the lodge, our car was blocked in by a Jammer. I had read about Glacier's famous jammers, which are big red busses with retractable roofs that offer tours of the park. I was intent to ride one at some point until a friend of mine explained they were mostly used to transport older visitors around the park. No one was getting on or off the jammer, so I asked the driver if he would please move his vehicle. He refused. We argued. He wouldn't budge, literally or figuratively. We were stuck until he decided it would be a convenient time to move. I sat in the car and fumed while he kept us trapped there for almost an hour (six minutes). That solidified it. I was in a foul mood for the day.

Looking back, I know how silly it was to be in a bad mood while on vacation, especially when we were surrounded by so much wonder. Heck, I even knew it then. We had been on the road for a week at that point, having hit the Badlands and Yellowstone before arriving in Glacier the night before. I suppose road weariness has to pop up sometime.  But despite the nagging irritation, I was constantly distracted from my grumpiness by the amazing sights we'd see throughout the rest of the day.

Once we were finally released by the jammer (they are now dead to me, by the way), we made our way back out the road we had come in the night before. This time we got to more thoroughly enjoy the views we sped past the previous night. They were stunning. I could tell why some people say this part of the park (The Many Glacier area) is their favorite. At one point along the way we noticed that several people had parked on the side of the road and were looking upwards at a hill with cameras and binoculars. We pulled over to check out the scene, and there it was, our first bear. 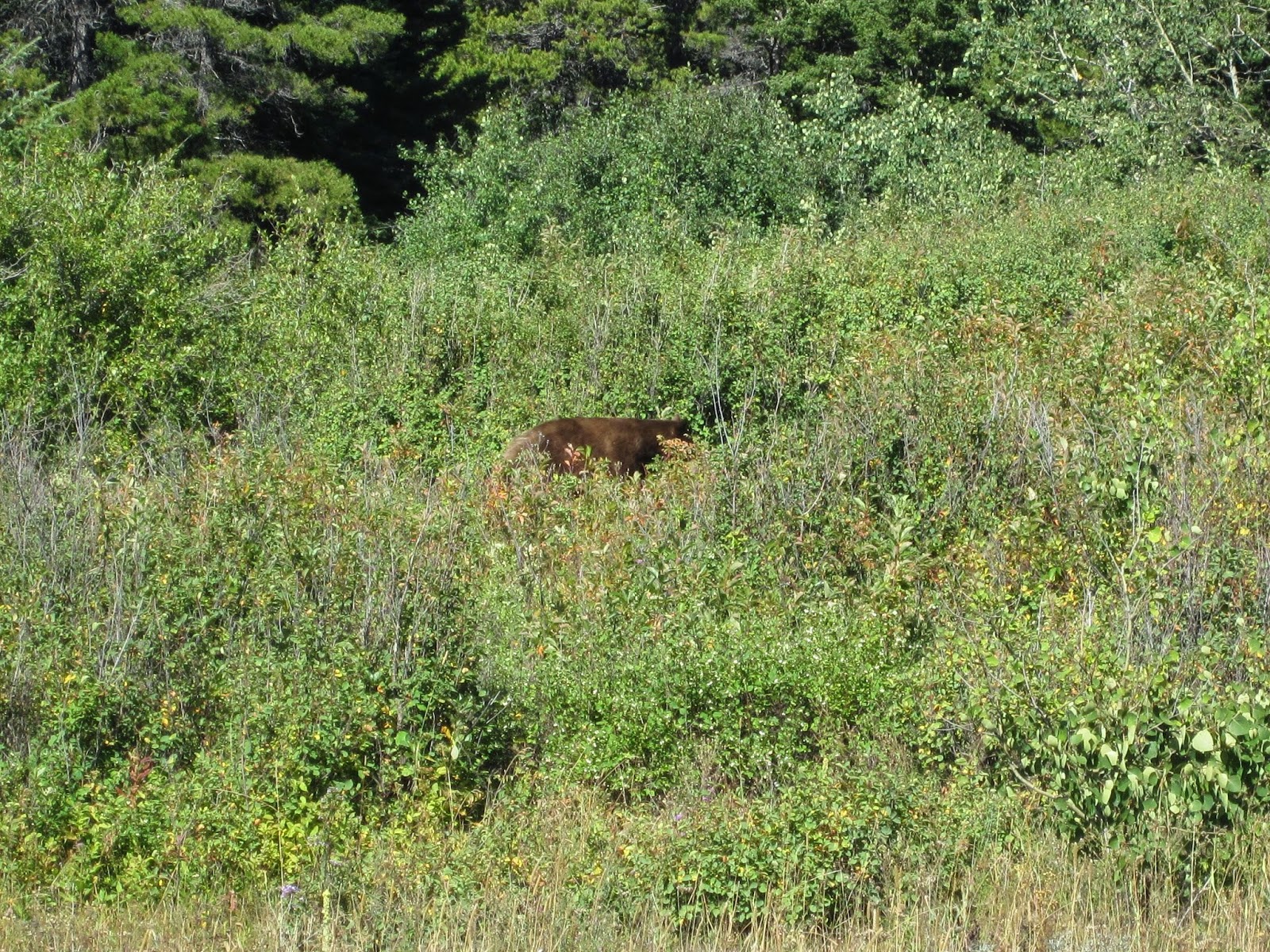 GNP is known for its large population of bears, and September is a great time to see them because they're out foraging for food so they can save it for winter. This one seemed quite intent on doing just that, walking along and eating the berries and plant life it encountered.

By pulling over and gawking, the lot of us were backing up traffic. This is known as a bear jam, and the park strongly discourages this kind of behavior. But how could we resist, with a creature of this magnitude visible from the road?

Bear jam behind us, we proceeded out of the Many Glacier area and towards the east entrance to Going-to-the-Sun Road, the main road through the park. The construction of this road was a monumental step in the history of the national parks, and it is known just as much for its sharp and dramatic twists and turns as it is its amazing views. I had looked forward to it for years, and it did not disappoint. Our plan was to cover the entire road, switch drivers at the end and then make our way back.

Our first stop on the road was to admire St. Mary Lake. It was here that we were struck with the full magnitude of this place. The view was stunning. As in, it literally stunned us and we were frozen in time and space as we looked out at this magnificent sight (also pictured at the top of this post). 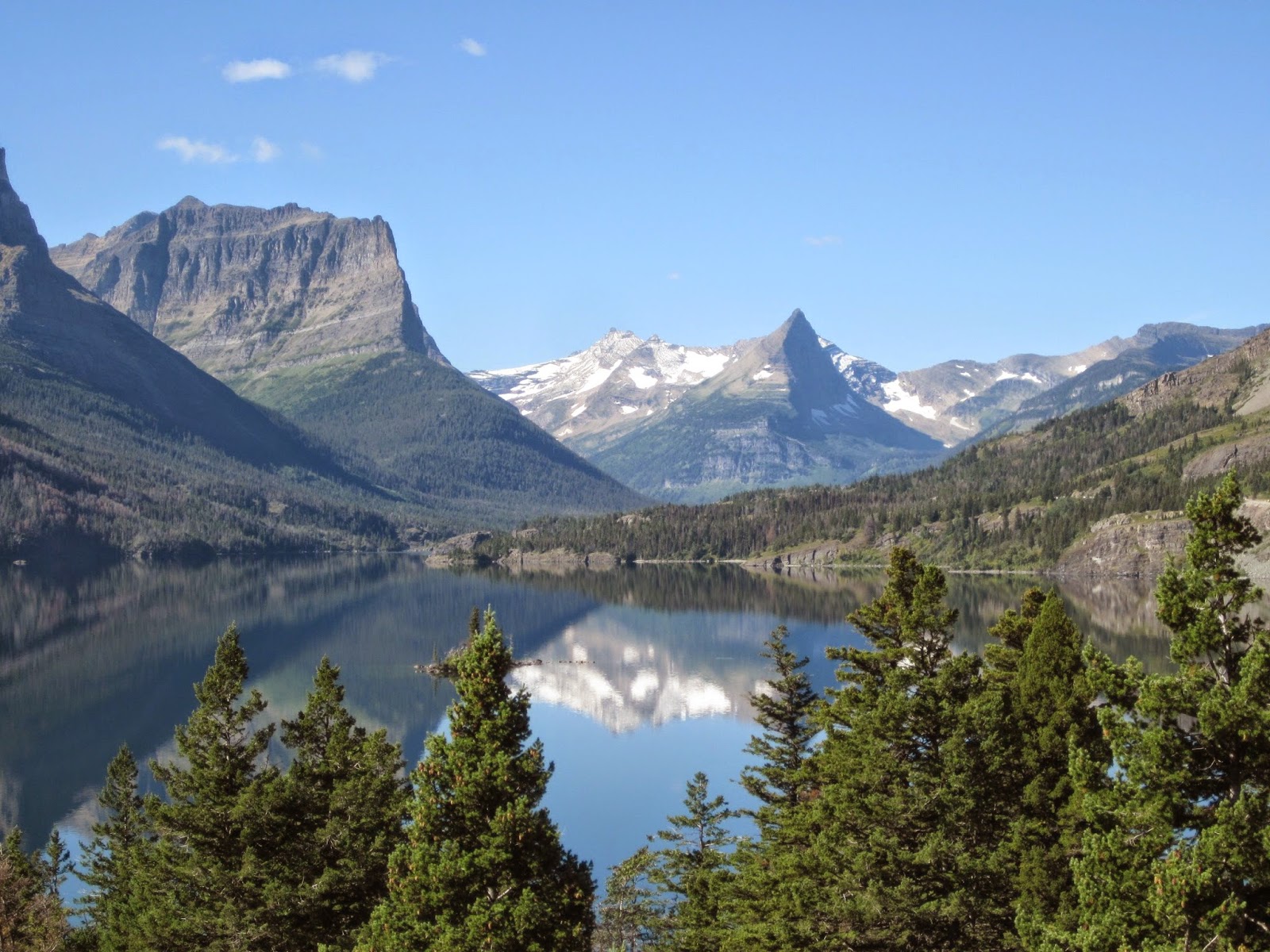 As we moved on past St. Mary, we caught a glimpse of Jackson Glacier, another major sight in GNP.

When you look the photo above photo, you might think that this glacier is just a pile of snow. You'd be right! Turns out the actual definition of a glacier is a mass of snow that meets certain depth and temperature requirements. Good to know.

As we continued on, the roads got windier, the mountain peaks got taller and the views got more dramatic. I was really enjoying hugging the sharp turns and Mrs. Tires was thrilled to take in the views while staring out the open window. There was a lot of traffic on the road which kept our speed in check. This was probably a good thing, as I was feeling pretty confident after 2,000+ miles of driving, and one wrong turn while hitting the gas could be disastrous. As we got closer and closer to Logan Pass, the traffic got heavier and heavier. On our way there, we noticed this sign. 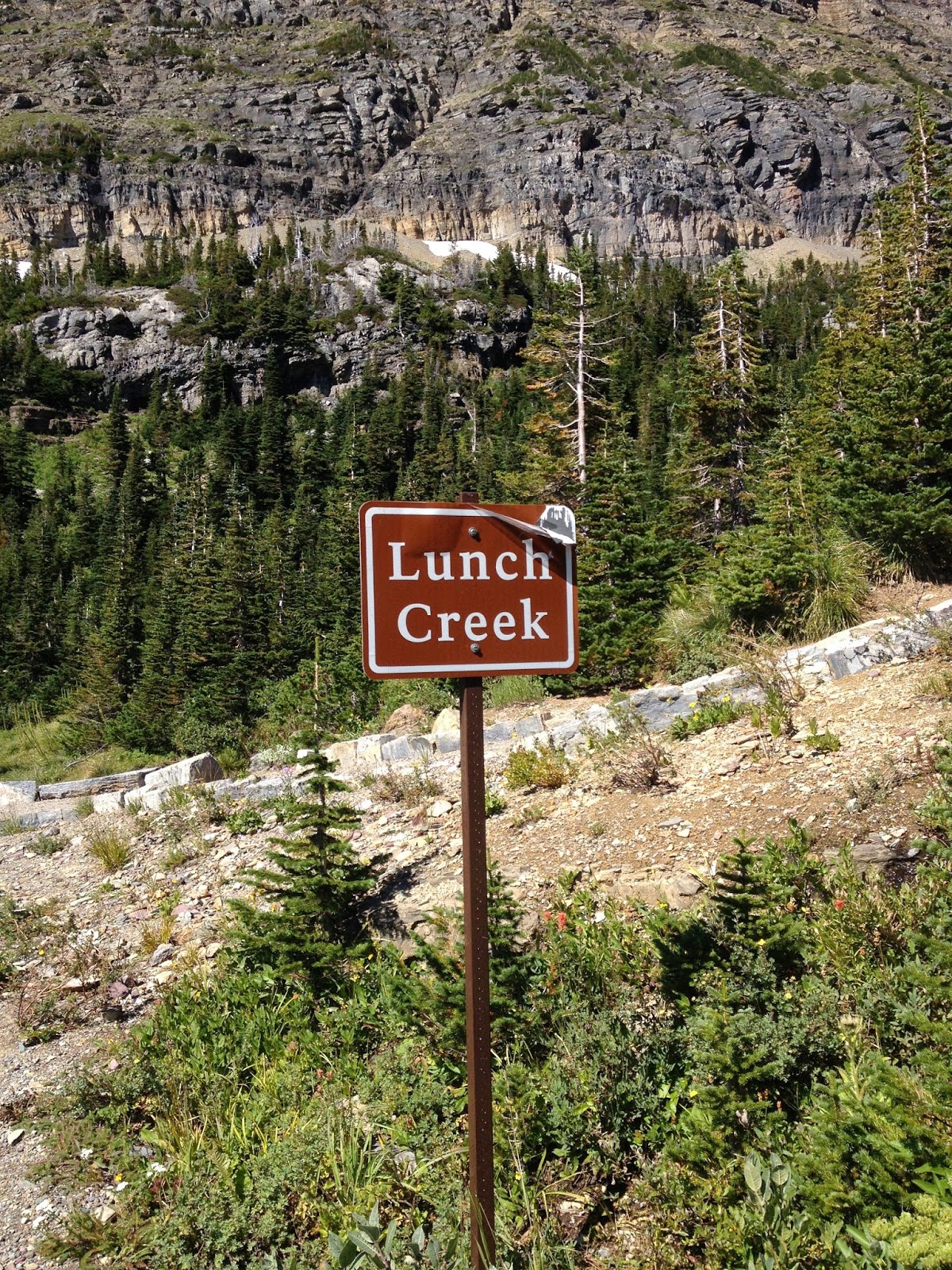 Who were we to dispute this distinction?

We continued on and encountered this tunnel through the side of the mountain, which we found infinitely cool. We snapped about 3,000 or so shots as we went through, but I'll only subject you to three of them: 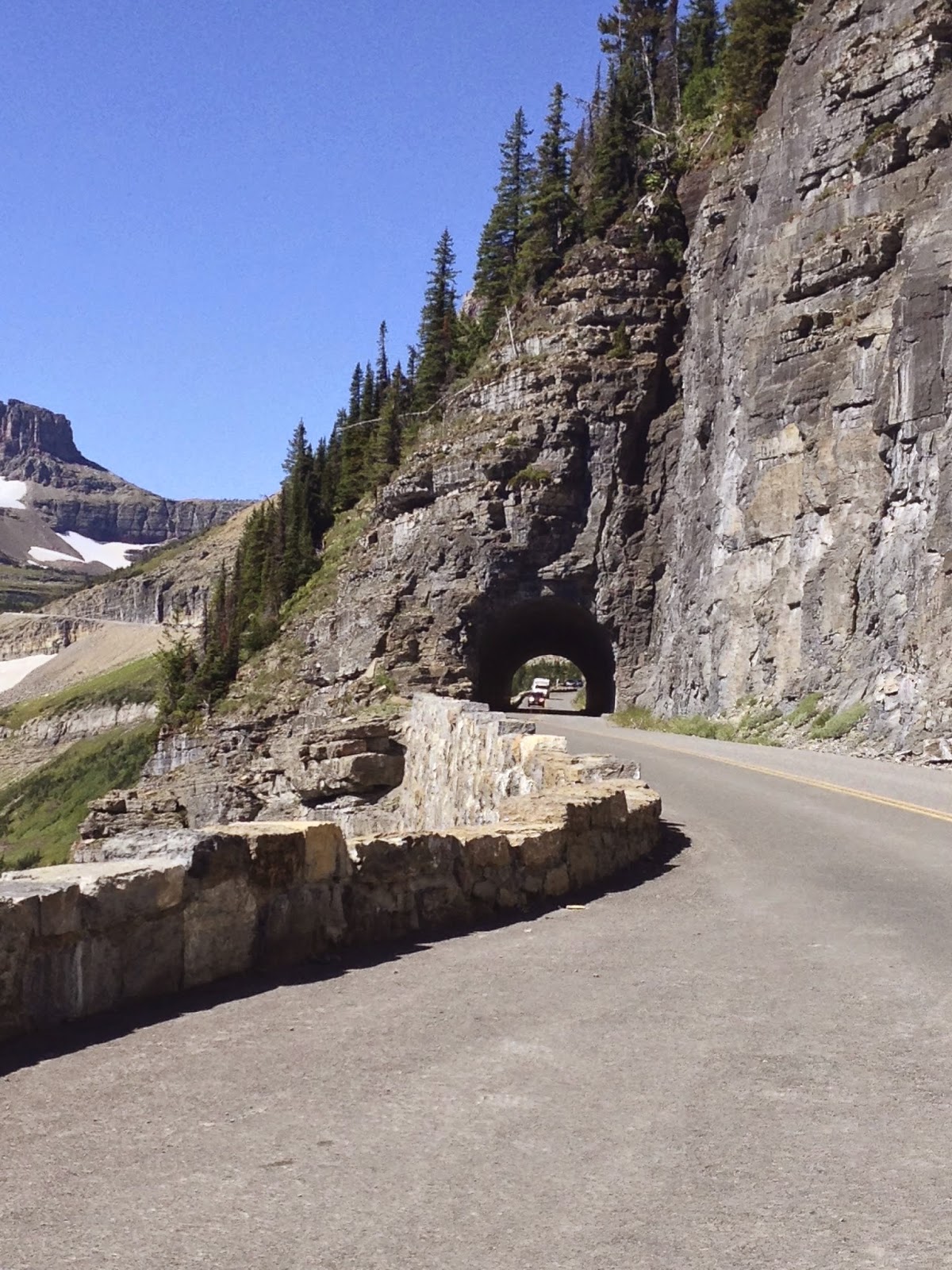 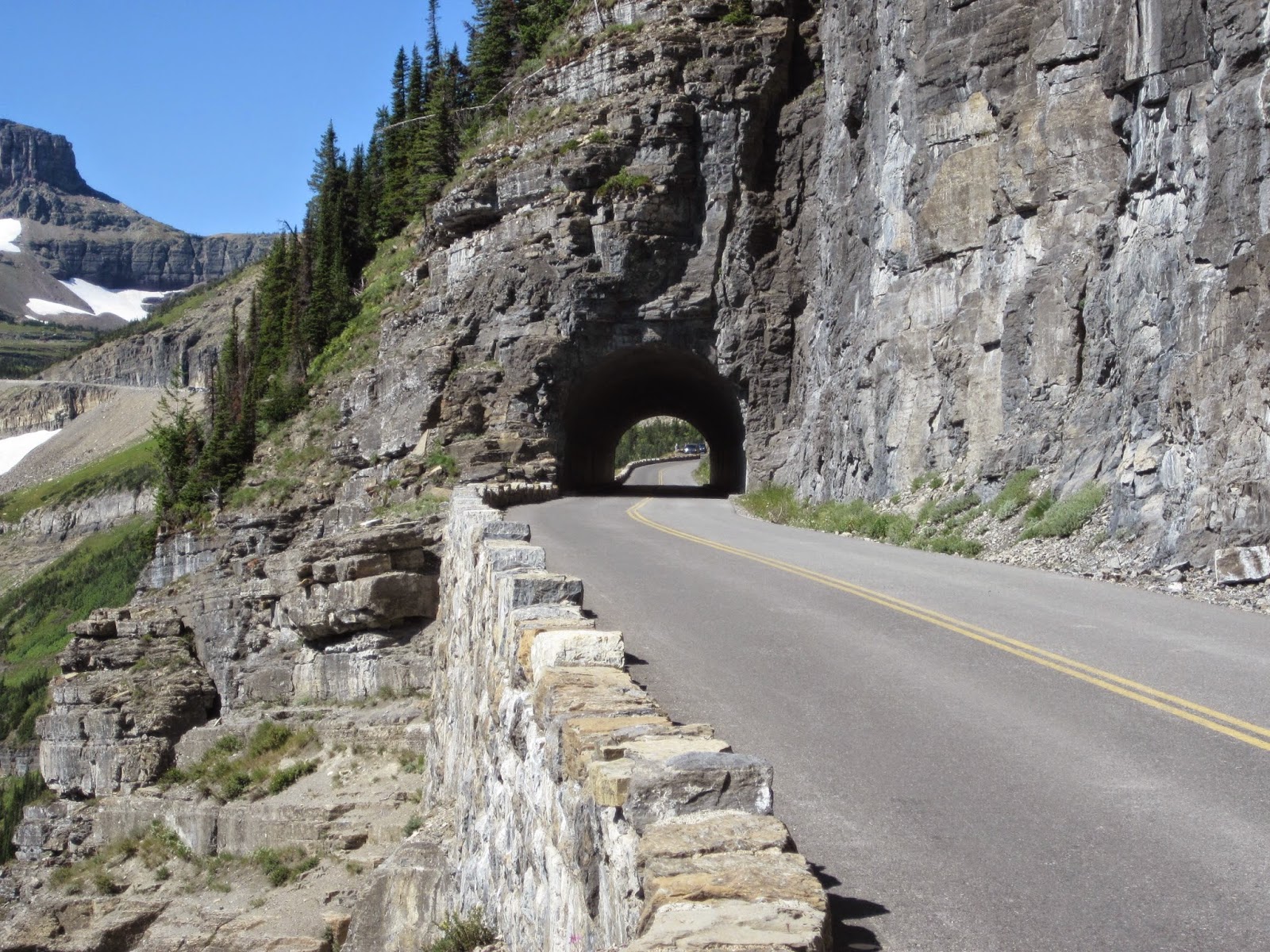 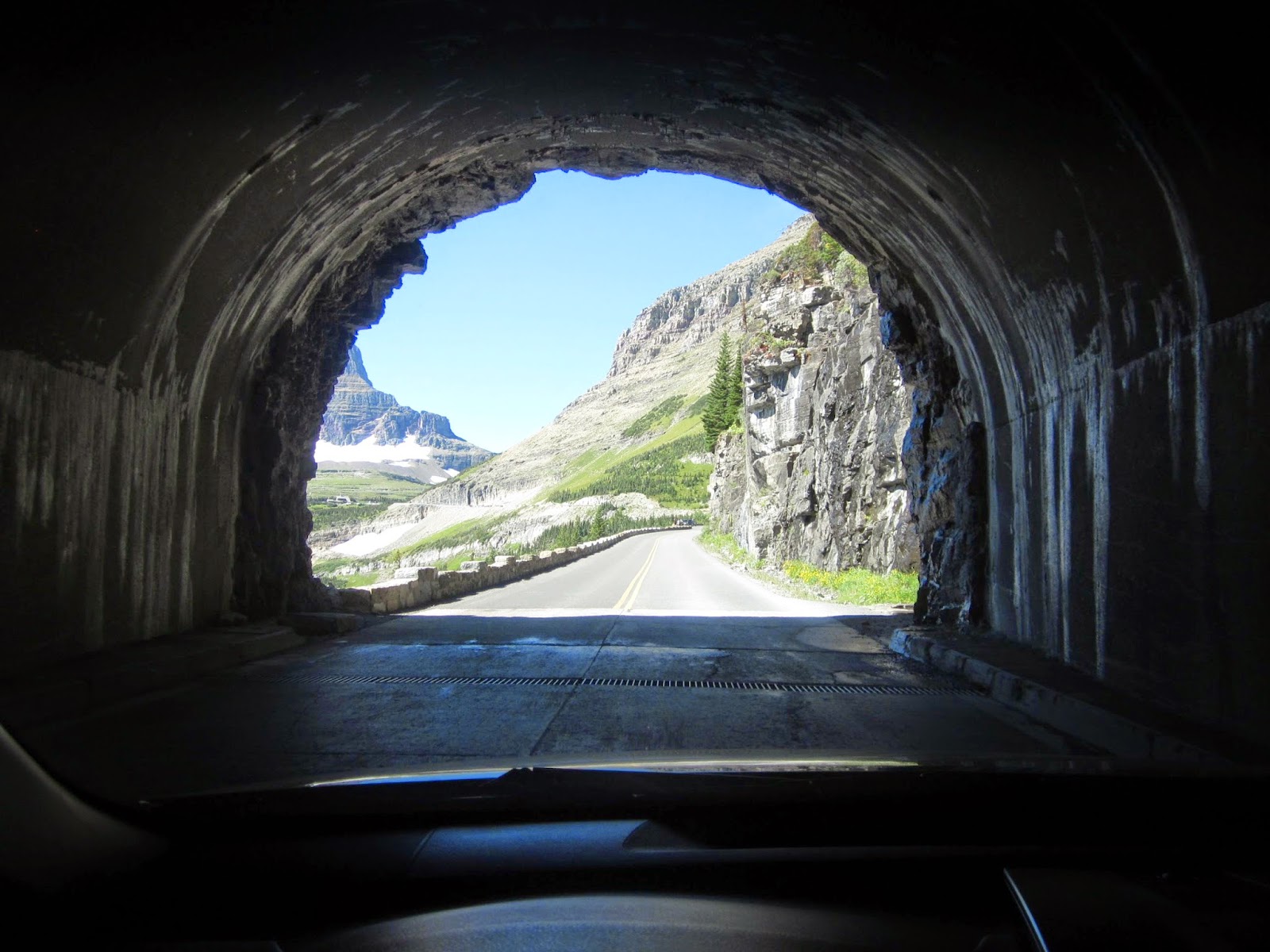 Just past the tunnel was the Logan Pass visitor center. It was quite popular! So popular in fact that we tried for twenty minutes and couldn't even get a parking spot for a visit. We reluctantly moved on, and noticed they had stopped allowing cars into the parking lot shortly after we entered. That's how popular this place was. No bother. The sights around Logan Pass were full of highlights. We pulled off shortly past the visitor's center to stretch our legs. We had seen some signs in the area about a mountain goat observation site where the goats' habits were being monitored. After a while a few large furry mountain goats appeared. They were really cool creatures, and they looked much like the ones we had seen in Yellowstone. If you look closely, you can see they have transmitters around their necks for observation purposes. 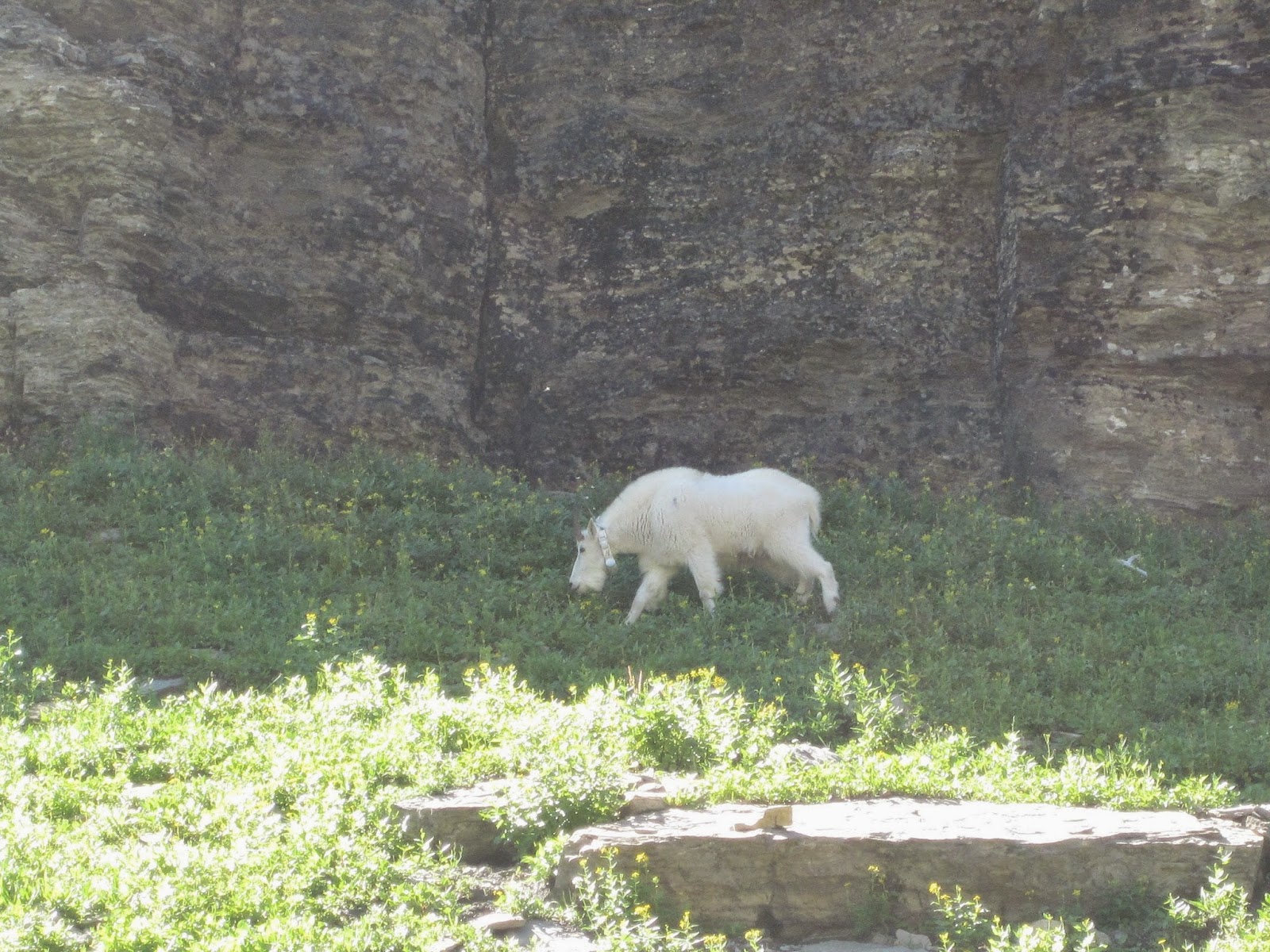 A little further up the road came a full-scale view of the Garden Wall, a gargantuan cliff covered with greenery. Amazing. There was one more surprise waiting for us after we passed the Garden Wall. We saw another bear jam, which meant more bears! This time we caught a glimpse of a mother bear and her two cubs. The road was very narrow so there wasn't much room to pull over, so people just took their turns slowly cruising by, stopping in the middle of the road to take quick pictures. They were in thick woods so it was hard to get them in a shot, but Mrs. Tires managed to snap a few gems as I drove. 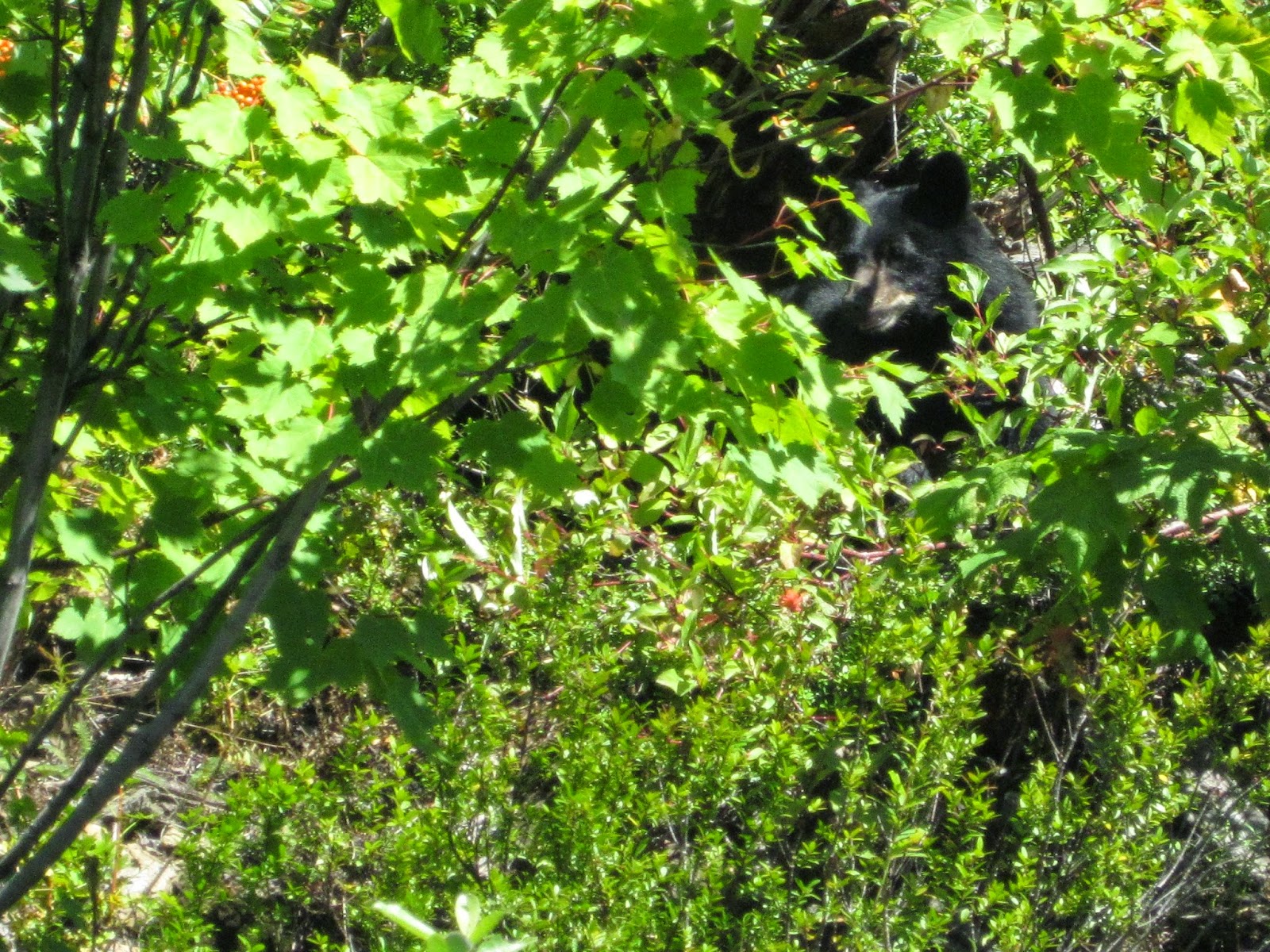 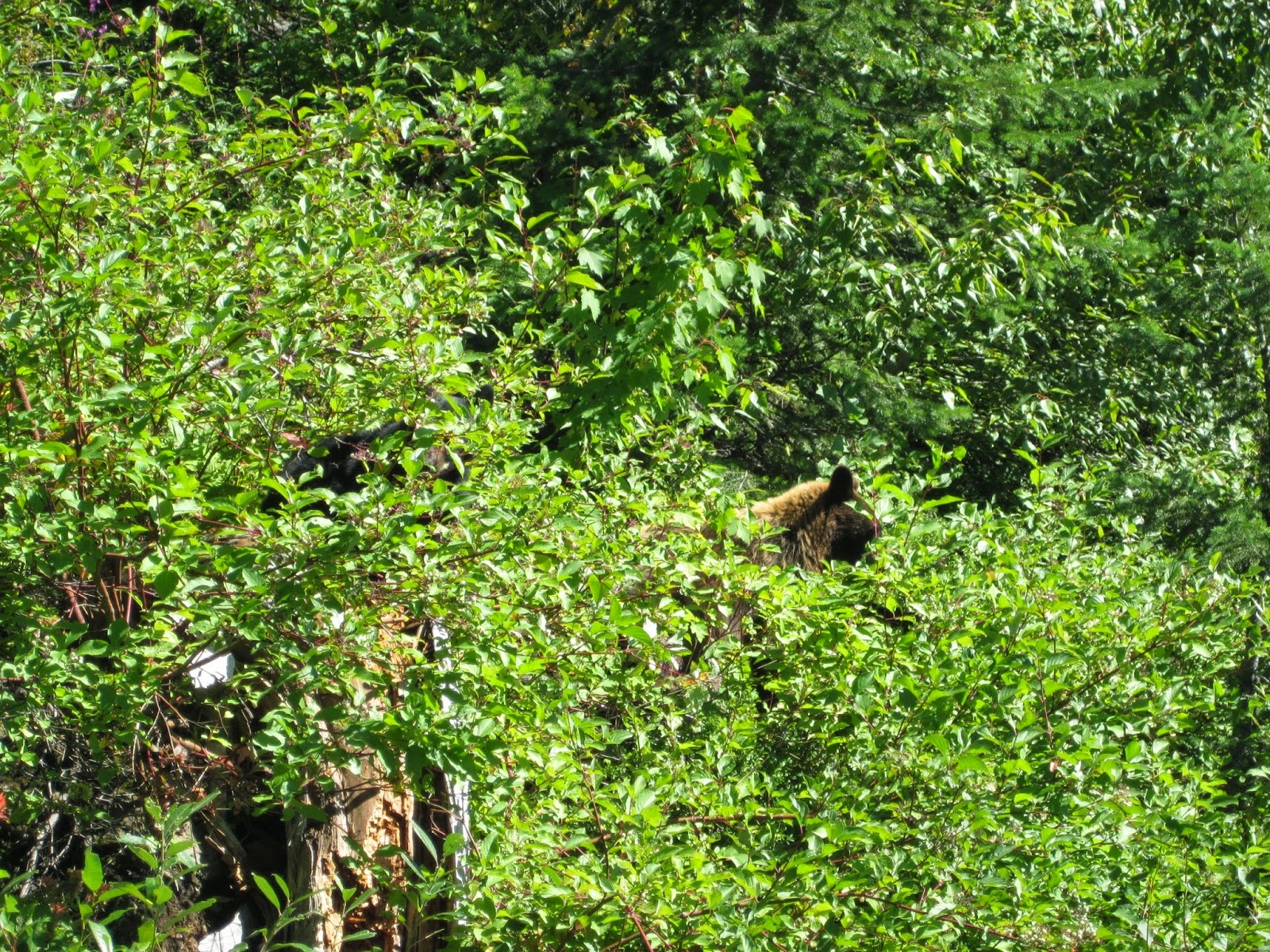 As we drove further away from Logan Pass, the elevation went down and the massive mountain peaks gave way to miles and miles of very tall trees. We knew the opening credits to the Shining were shot at GNP, and the thickness of the trees in this area seemed to match what we saw on the film, so we turned on the music from the Shining and cruised through the forest while picturing ourselves as a then mostly-sane Jack Torrence.

Eventually we made our way to Avalanche Creek, which houses the Trail of the Cedars. This trail does indeed go by many cedar trees, and you can smell the distinct cedar smell as you approach. We had been driving for most of the day at this point, so we relished the chance to get out of the car and into the wilderness a bit. Bear spray in hand, we went into the forest. You could tell Mrs. Tires was excited to get into the thick of things. She instantly turned into a wood nymph and made the cedars her personal playground. 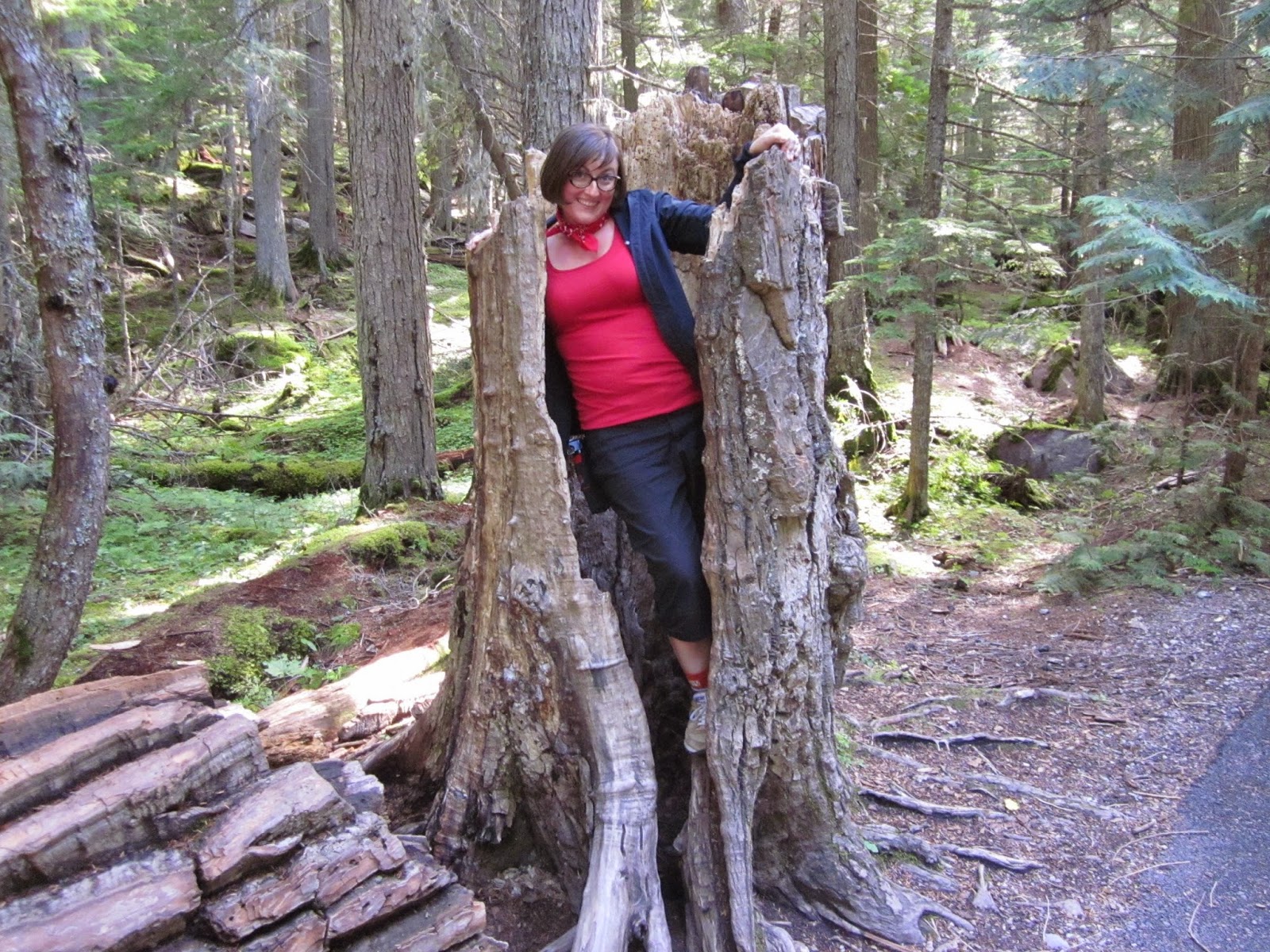 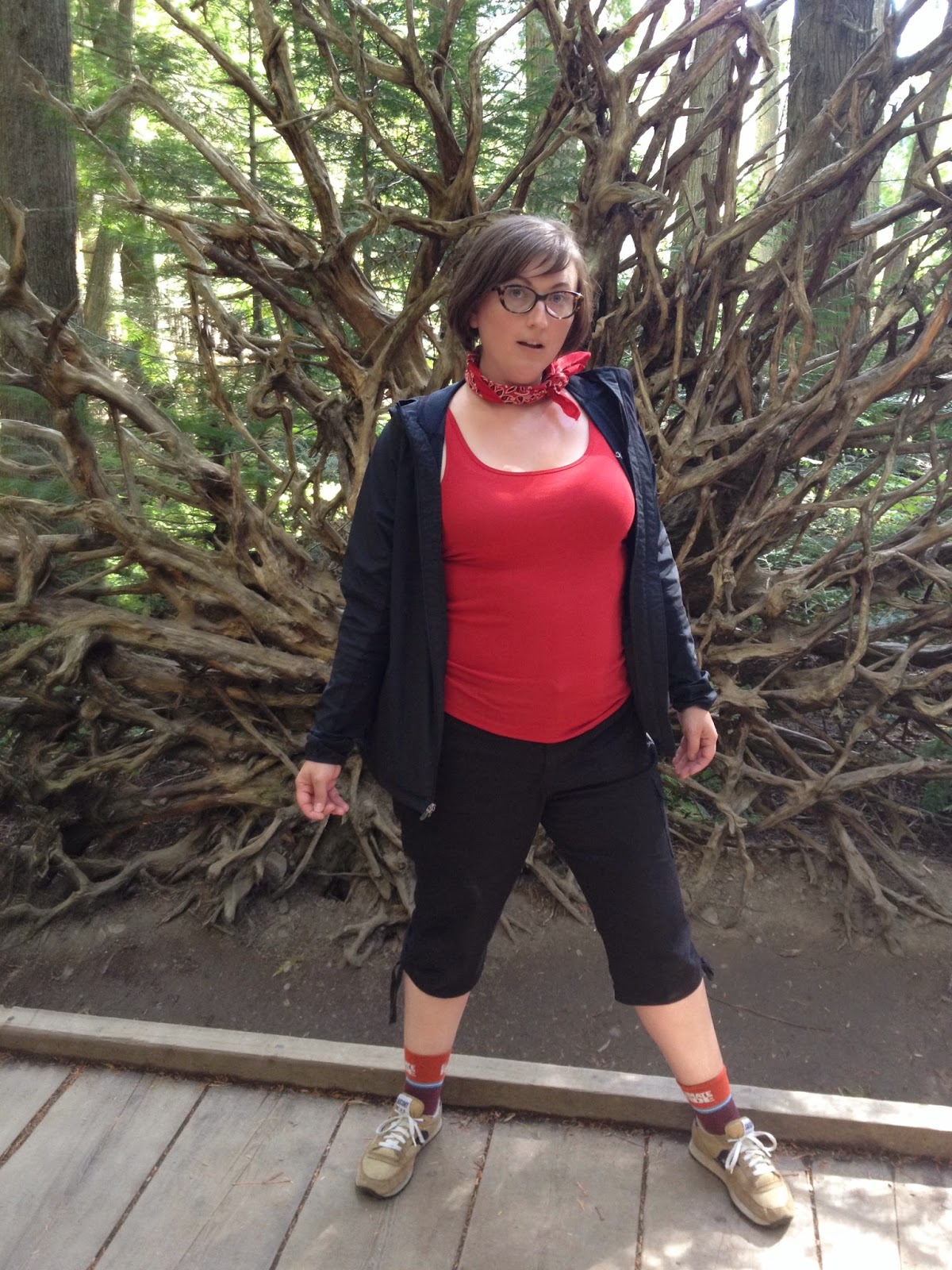 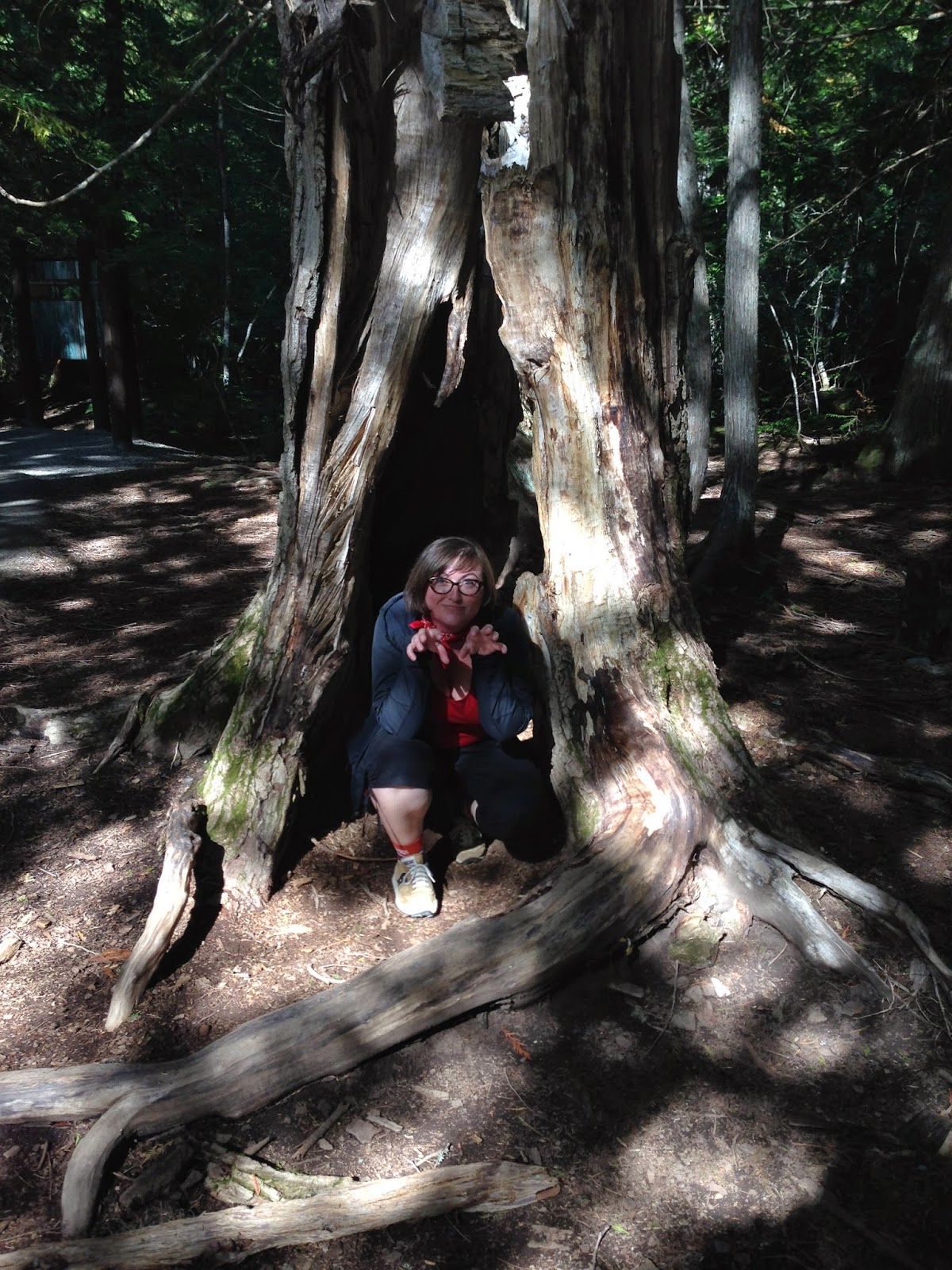 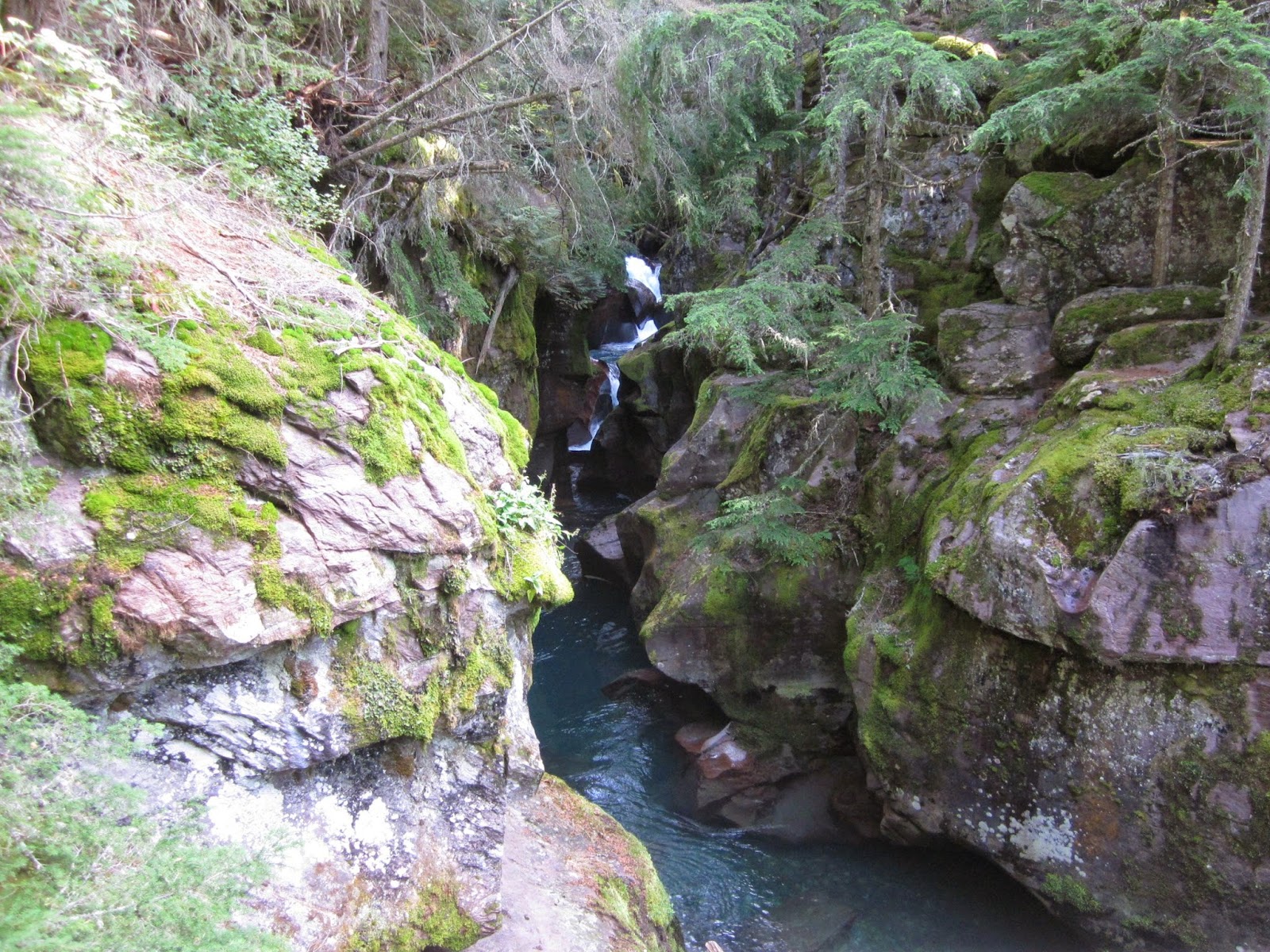 A little further up the road, the thick trees dissipated a bit and gave way to several different incarnations of water formations that eventually spilled out to Lake McDonald. We pulled over several times to photograph the various streams, pools and shores we encountered. We also skipped some rocks while snacking at the shoreline. 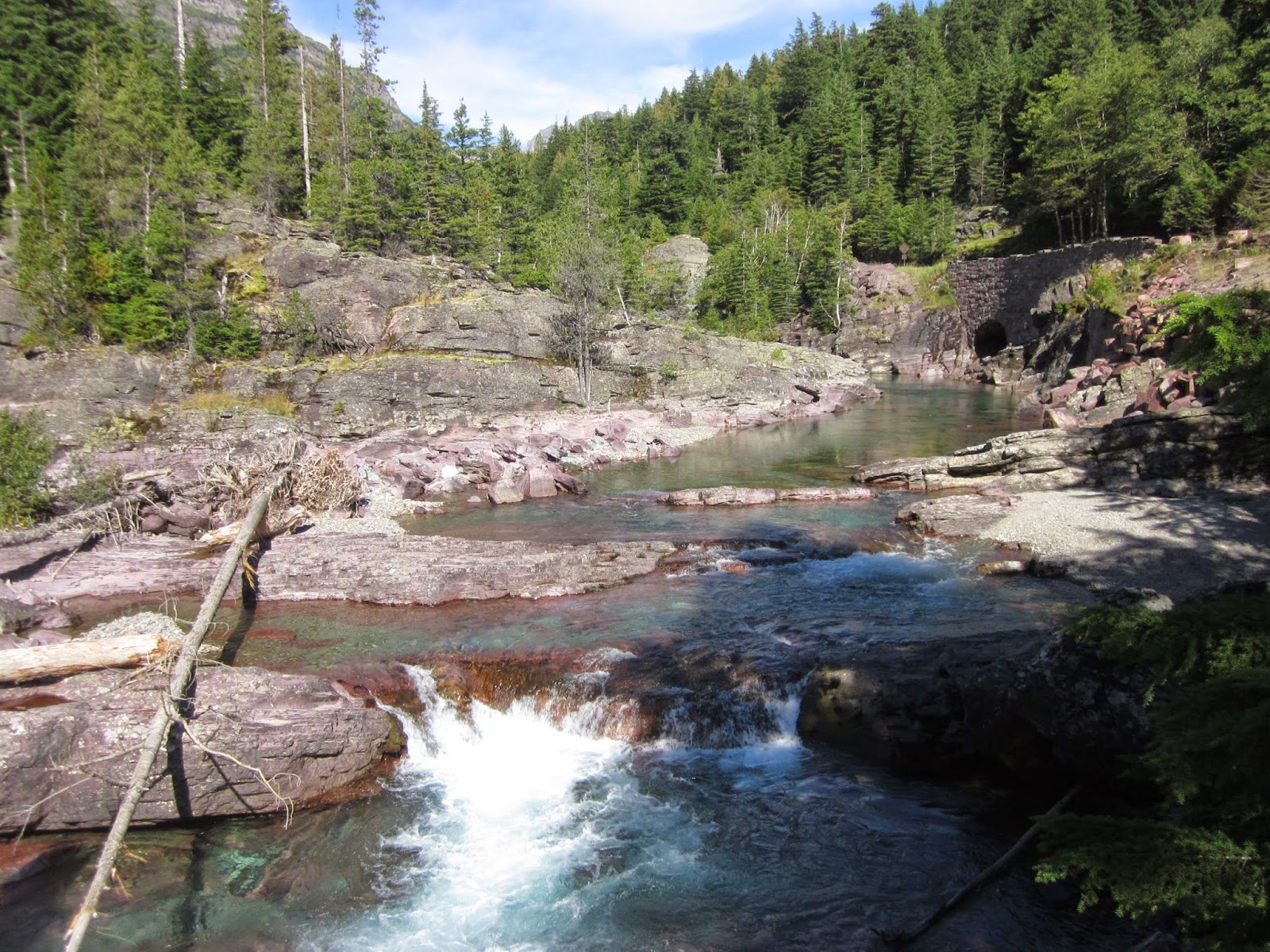 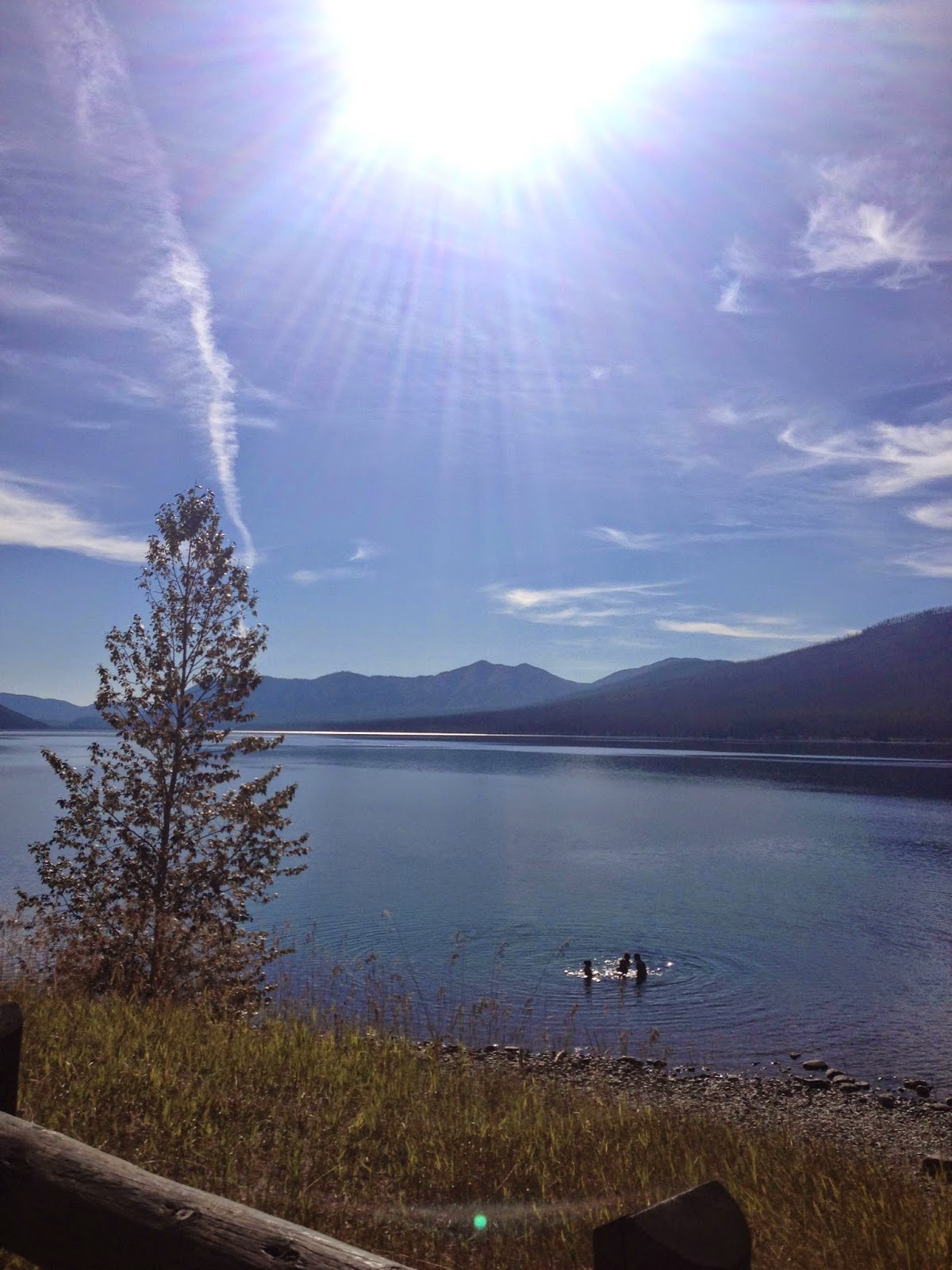 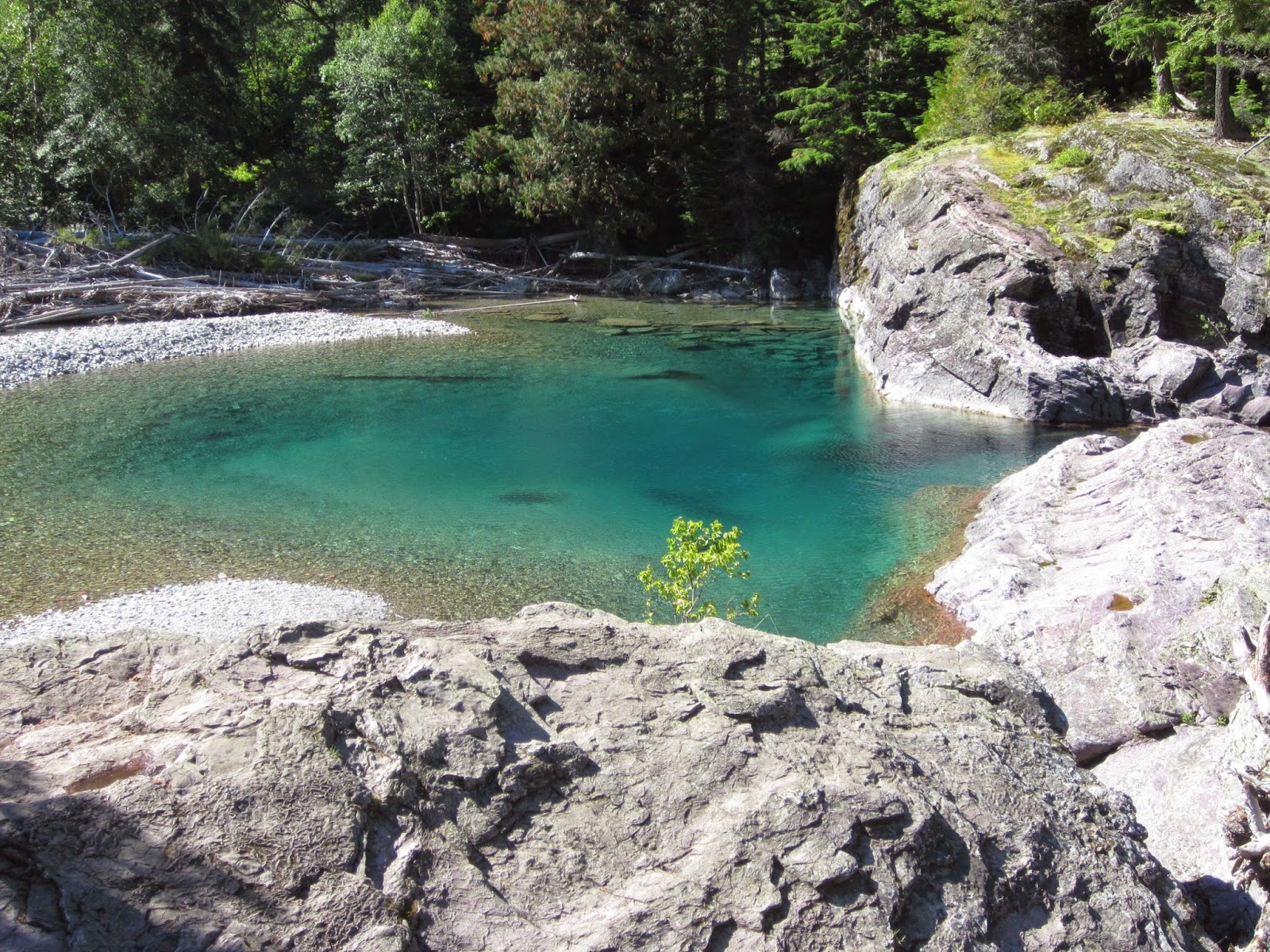 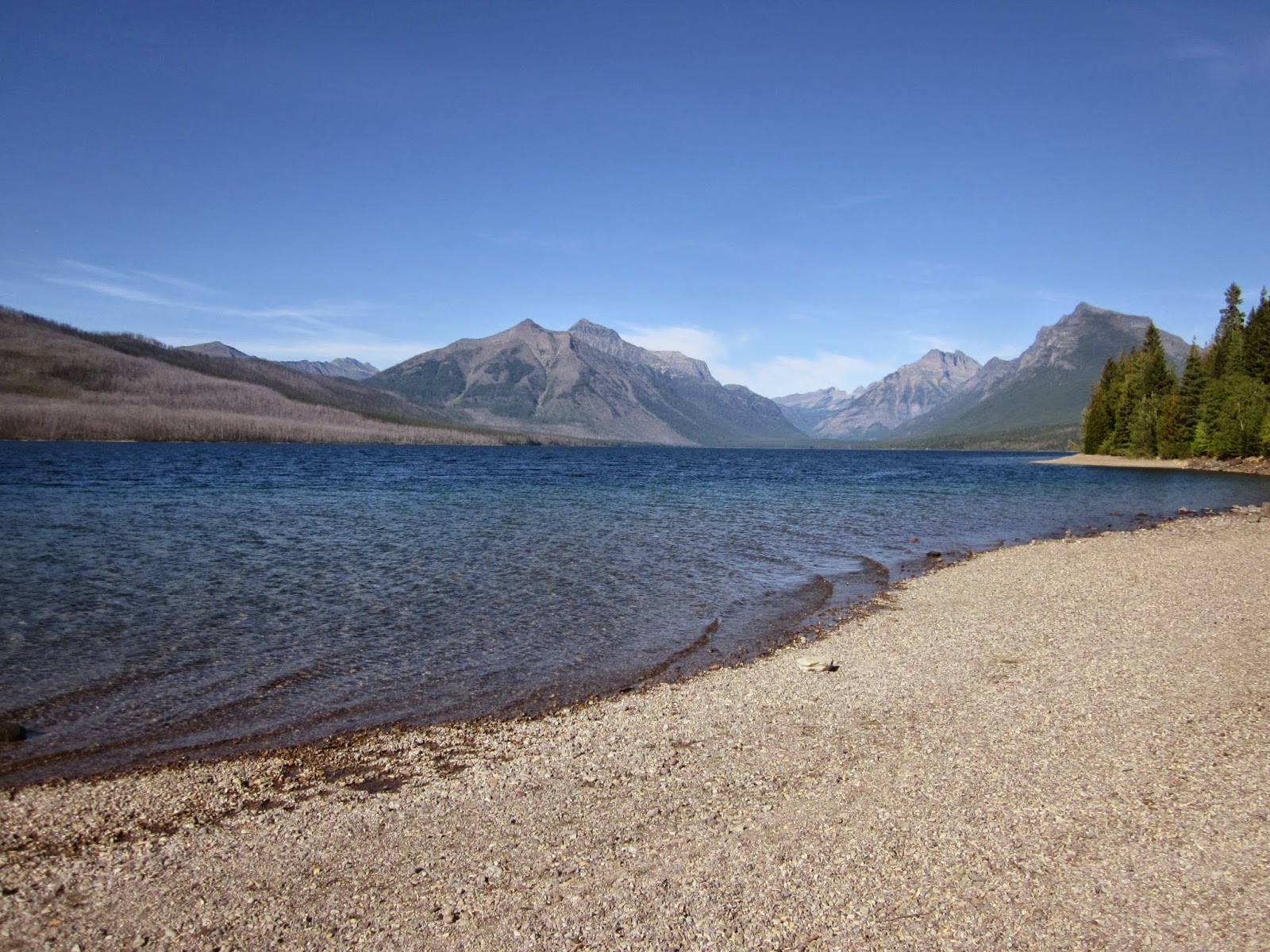 Lake McDonald marked the beginning of the end of Going-to-the-Sun Road, and since we'd be passing by this area again on our way out of the park in a few days, we decided we'd turn around, switch drivers, and start making the long trek back to our cabin.

On our way back, we took another shot at getting in to the Logan Pass area. The parking lot was still pretty packed, but we managed to get a spot. The reason this visitor's center is so popular is it houses the entrance to the Hidden Lake Nature Trail, a trail with easy terrain that brings you by many of the most prominent mountain peeks in the park. It was getting late in the day so we didn't have enough time to do the whole trail. However, we were really glad we got to see the part of the trail time afforded us, as it offered some of the most dramatic and striking views in the park. 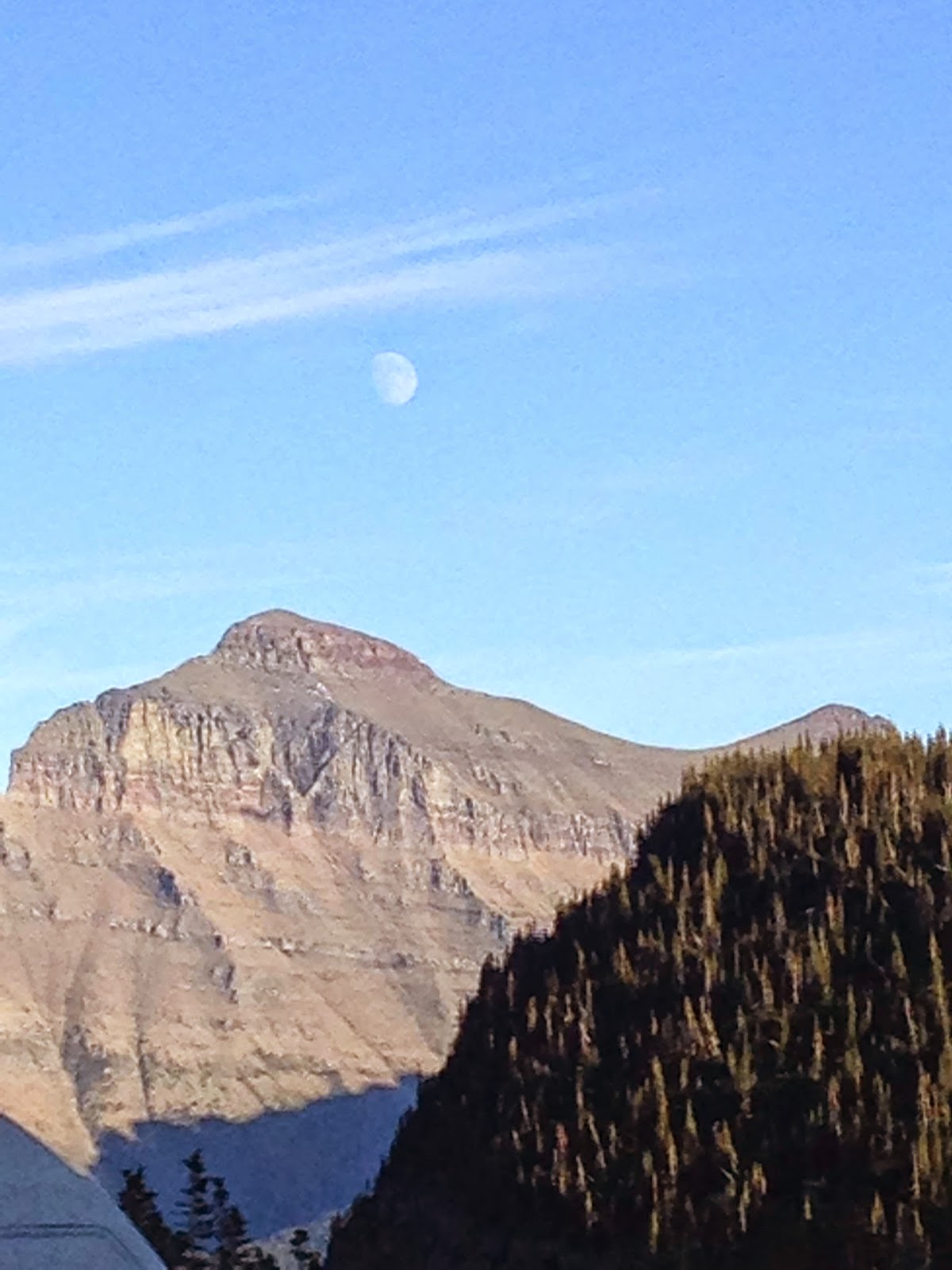 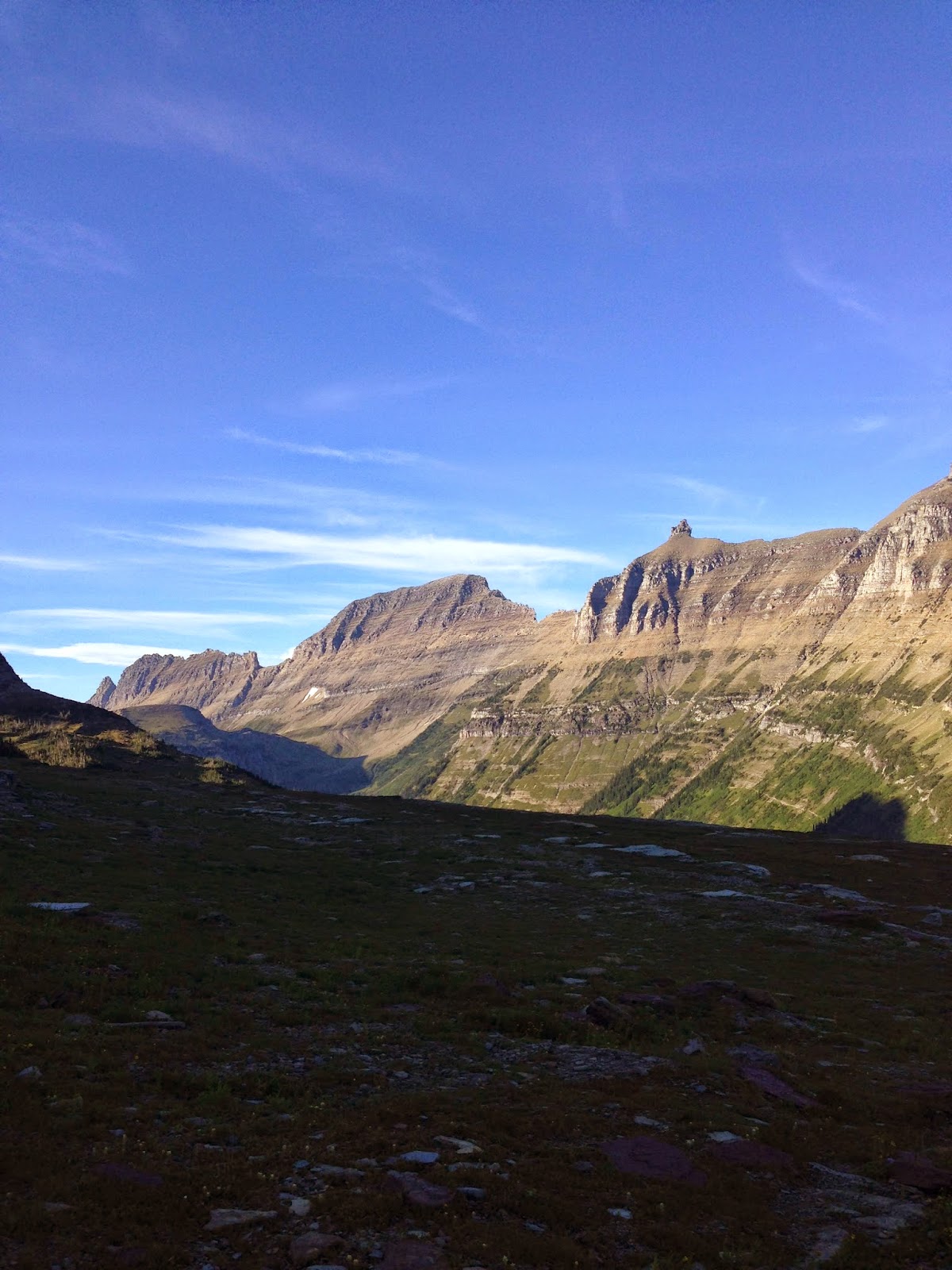 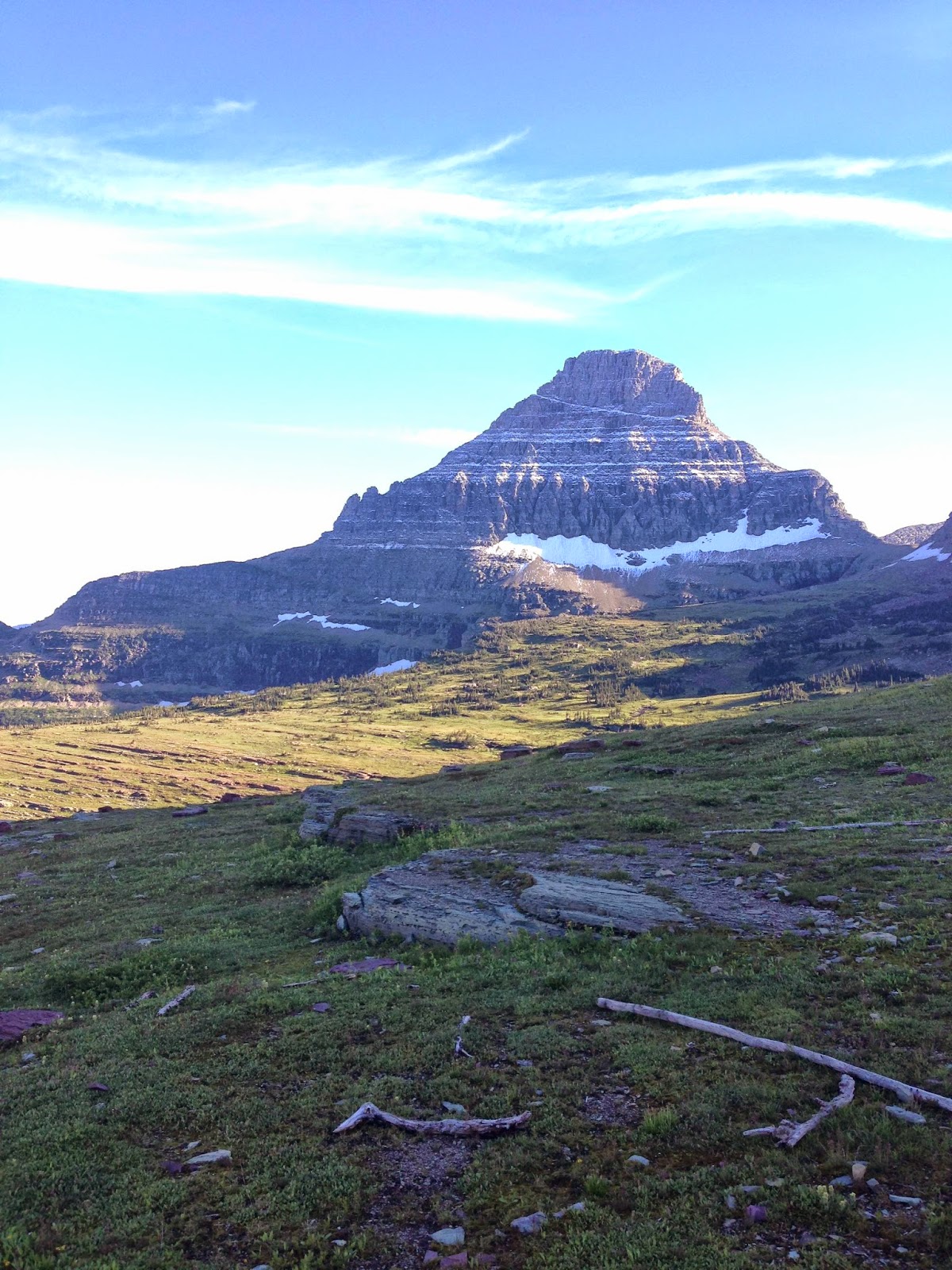 As we made it back to the east entrance, we saw what was now becoming a common sight - another bear jam! This time there was enough room to pull off to the side of the road, and the bear was in the open, allowing for many nice photos. This one had a smaller face and a white stripe across his back. We were pretty close to him, definitely less than the 100 foot recommended distance. Again, how could we not? It's not every day you see a bear! 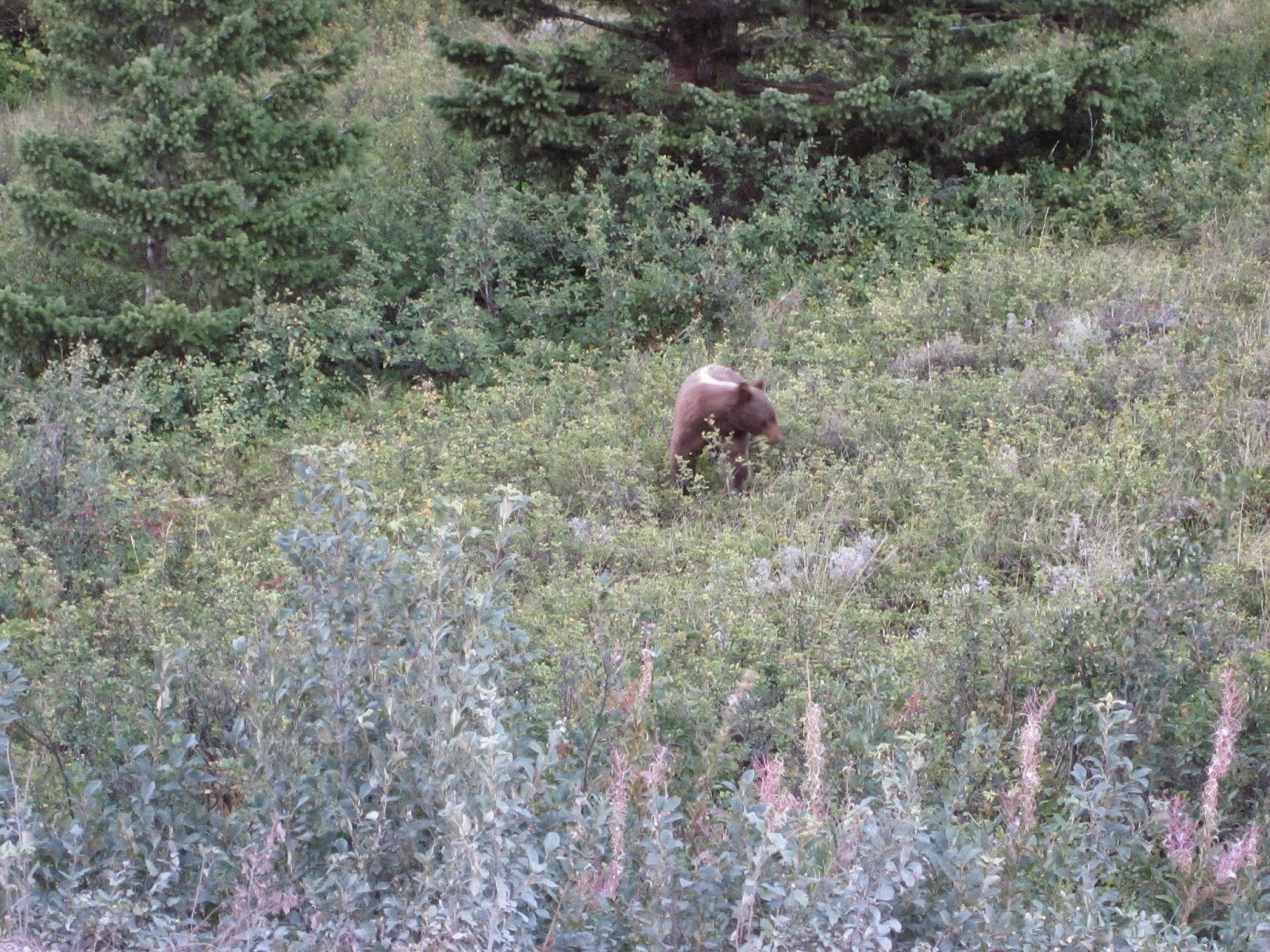 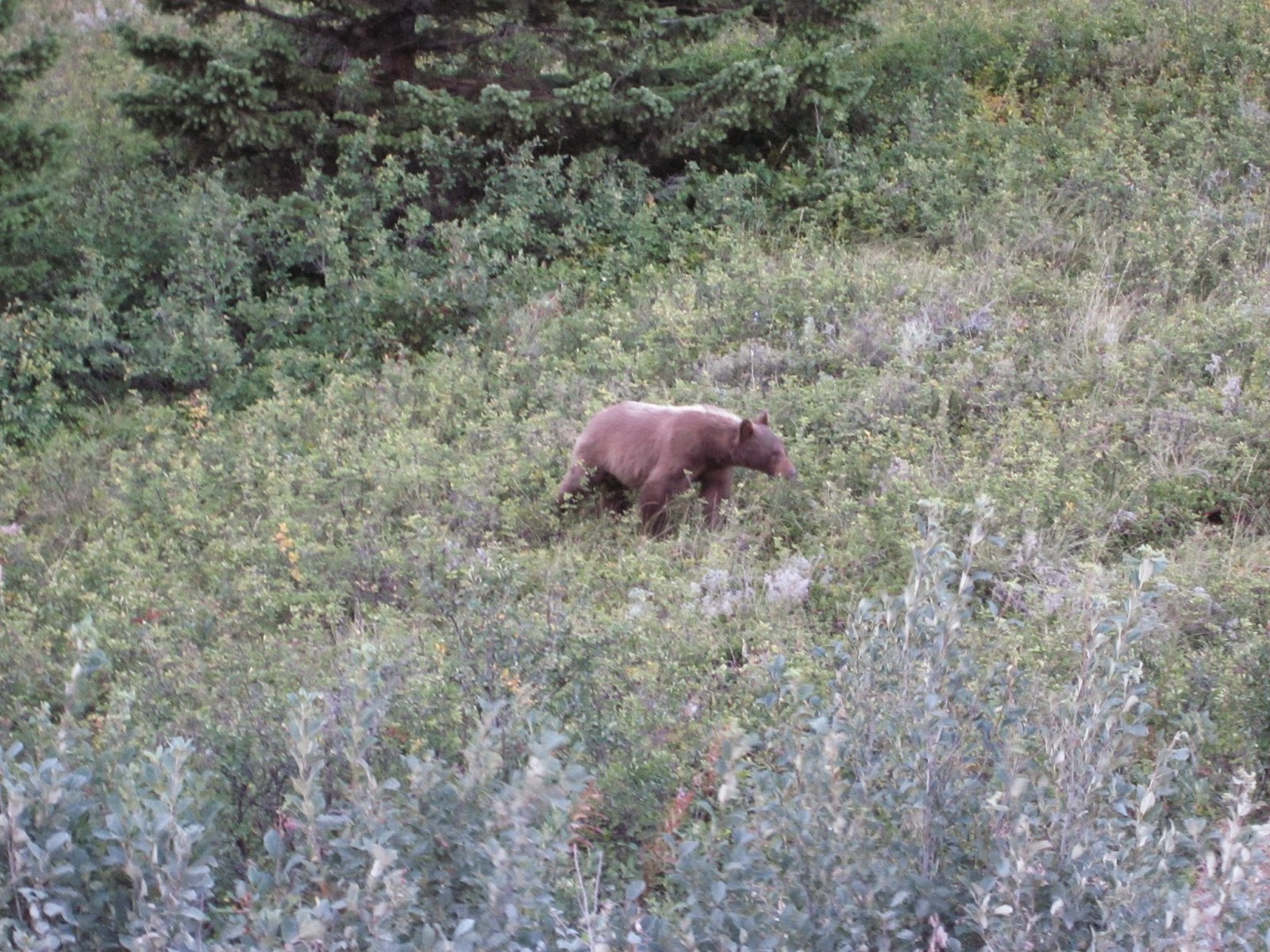 We hit 2,500 miles on the road trip just as we pulled off of Going-to-the-Sun Road for the day. 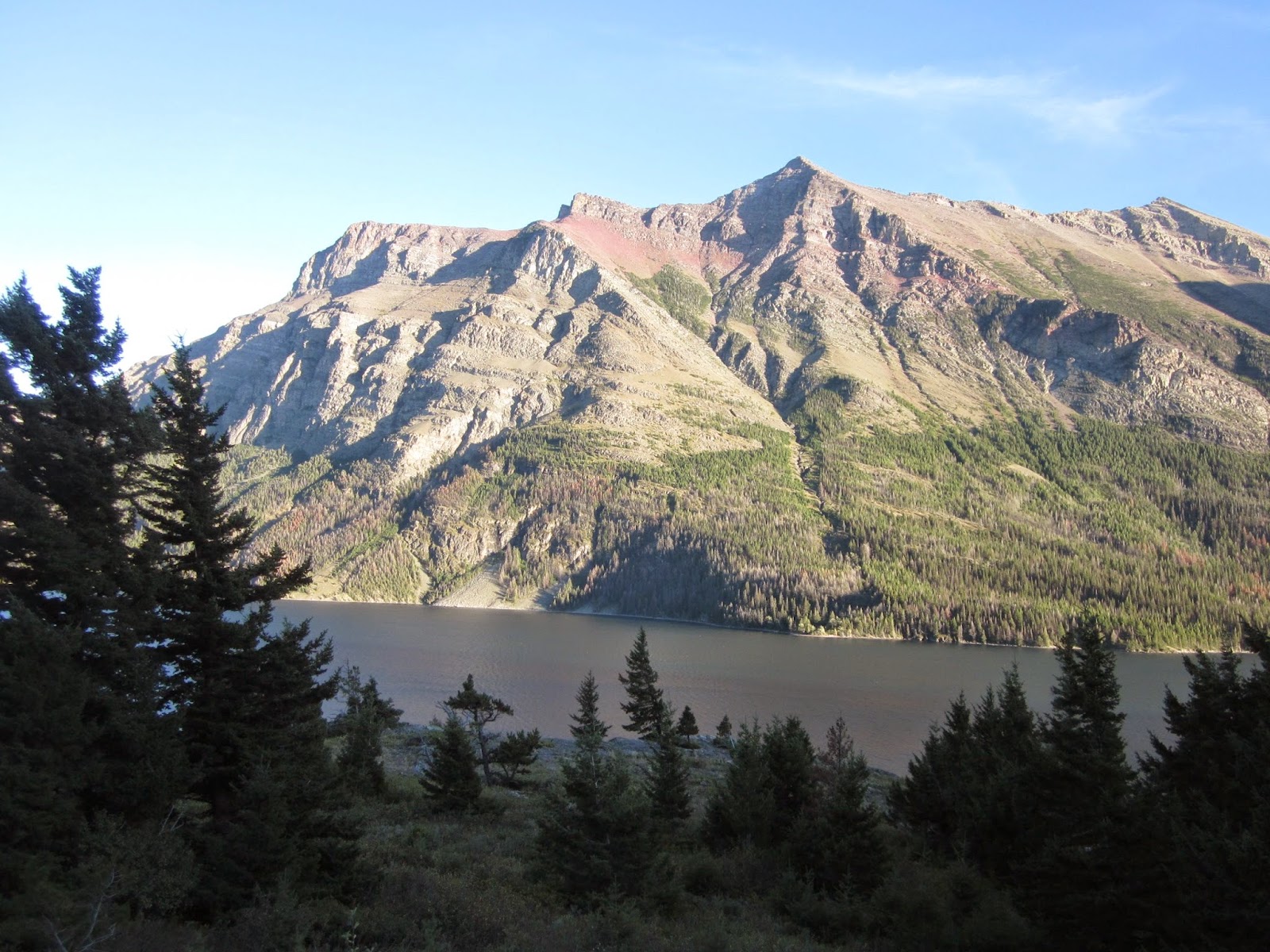 We had dinner that night at the Many Glacier Lodge, a visit that afforded us a view of this peaceful sunset. 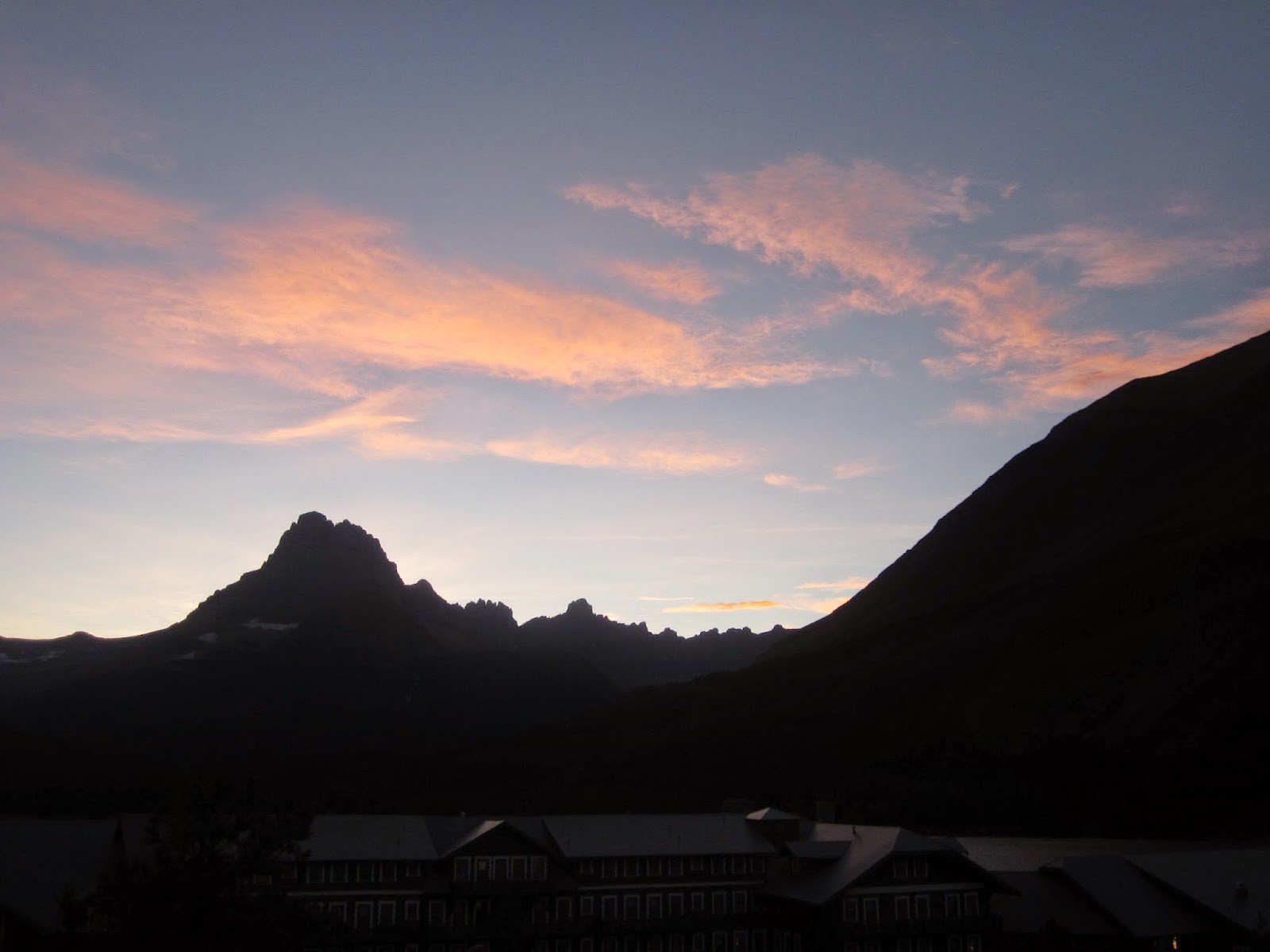 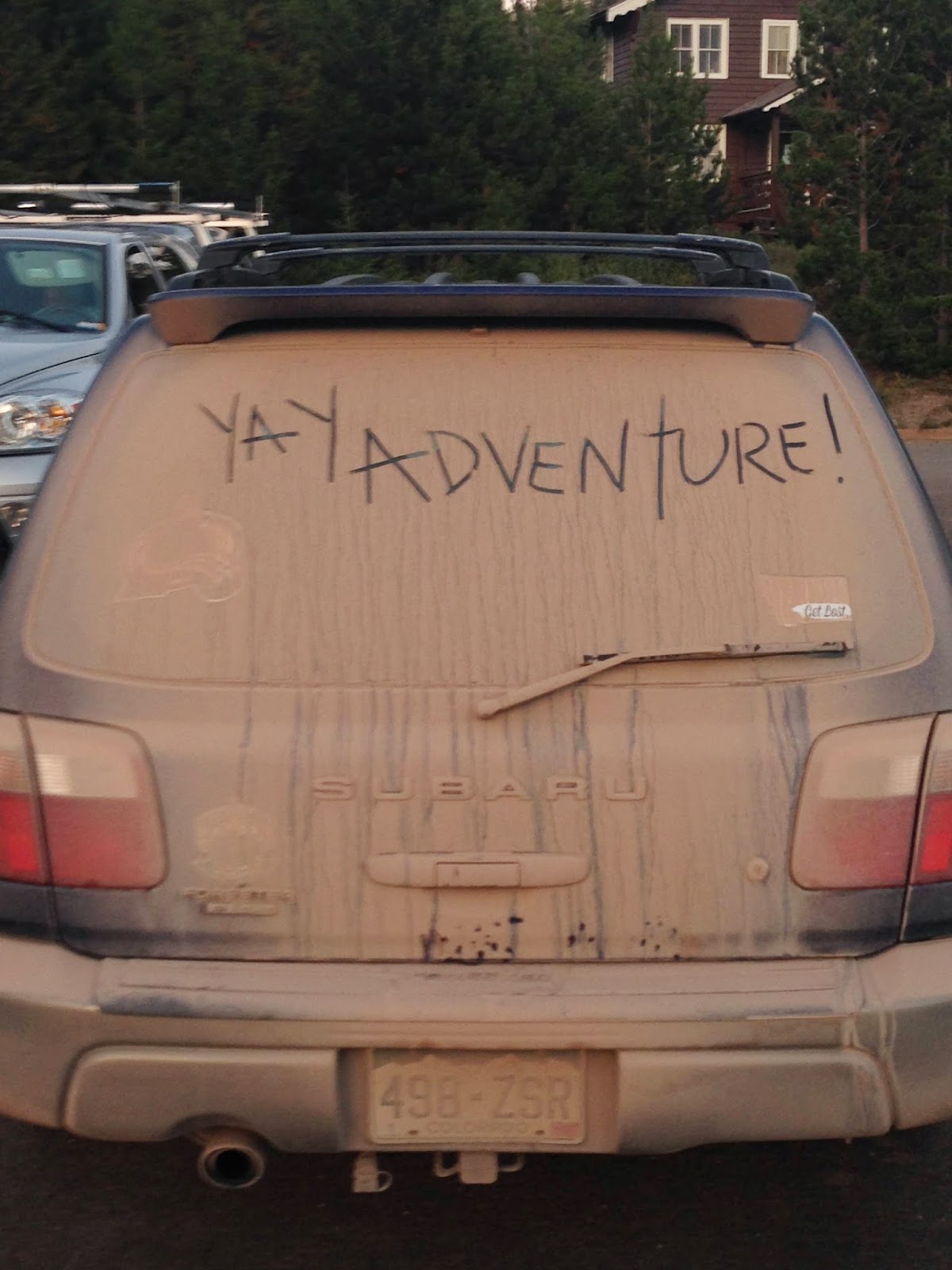