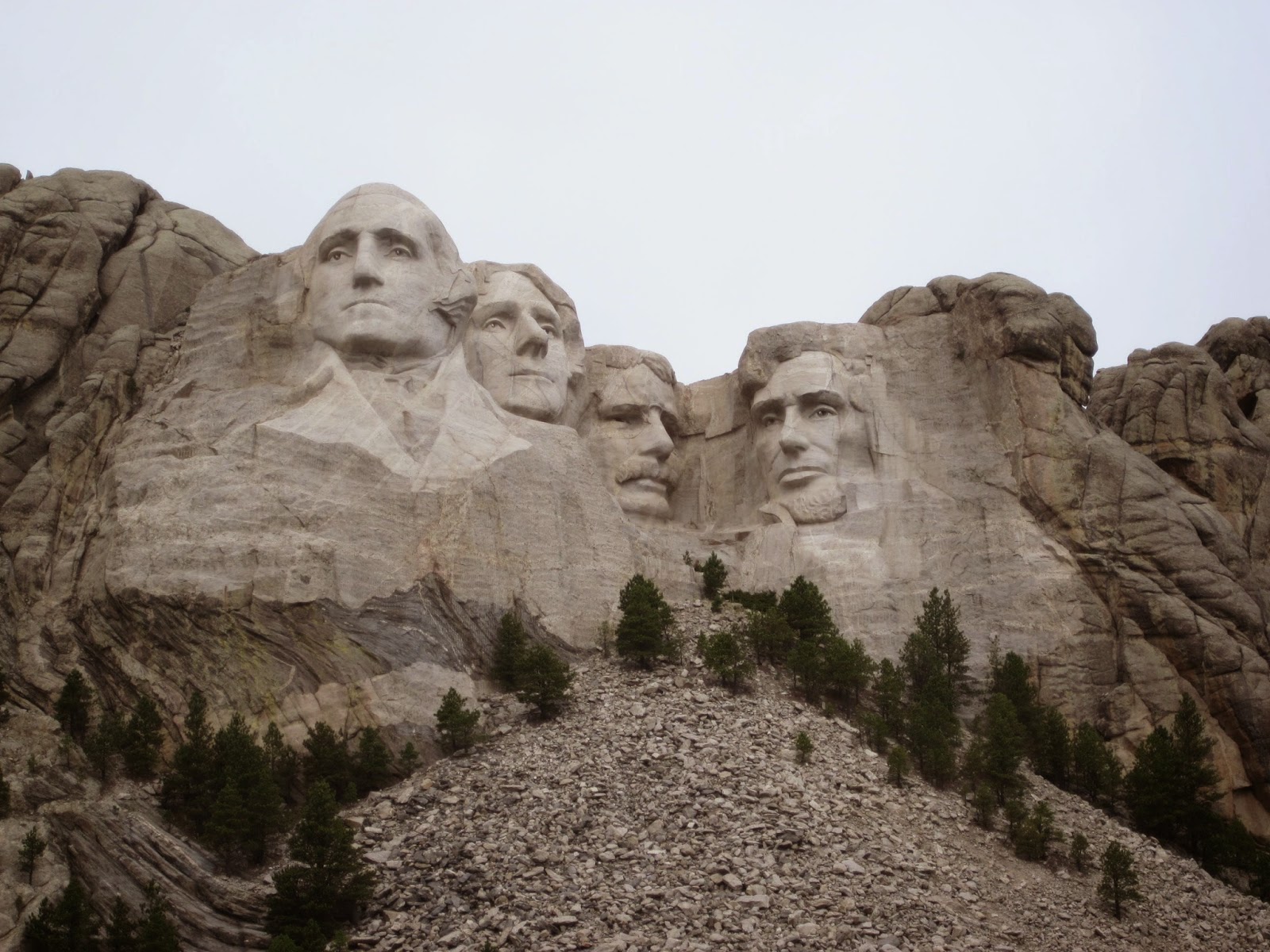 After checking out the Mitchell Corn Palace, Wall Drug and Badlands National Park (the details of which are detailed in South Dakota, Part 1), Mrs. Tires and I headed on to Rapid City, South Dakota as part of our epic road trip in the summer of 2014.

The rain stopped by the time we reached the America's Best Value Inn, our home for the night. After unloading our things from the car, we got some advice about where to go for a night out in Rapid City from the very friendly young lady at the front desk. She provided a map and recommend the Firehouse Brewing Company. It's hard to argue with a recommendation to go to a local brewery, so we followed the suggestion and headed about a mile down the road to the center of Rapid City.

Rapid City was voted the most patriotic city in America, and it was easy to see why. In addition to its proximity to Mount Rushmore, the city displays statues of every US president, one on every street corner. When we checked in at the Firehouse Brewery, we found there was a thirty minute wait, so we happily wandered the streets to check out these amusing statues while we waited. While some of these statues were fairly straightforward, others featured unique twists to show the presidents' personalities, such as Reagan in a cowboy hat and Taft about to pitch a baseball. During our trip to Italy the previous year, I started taking funny photos of statues wearing sunglasses, and this was the perfect opportunity to continue the practice. Below are a few of my favorites. 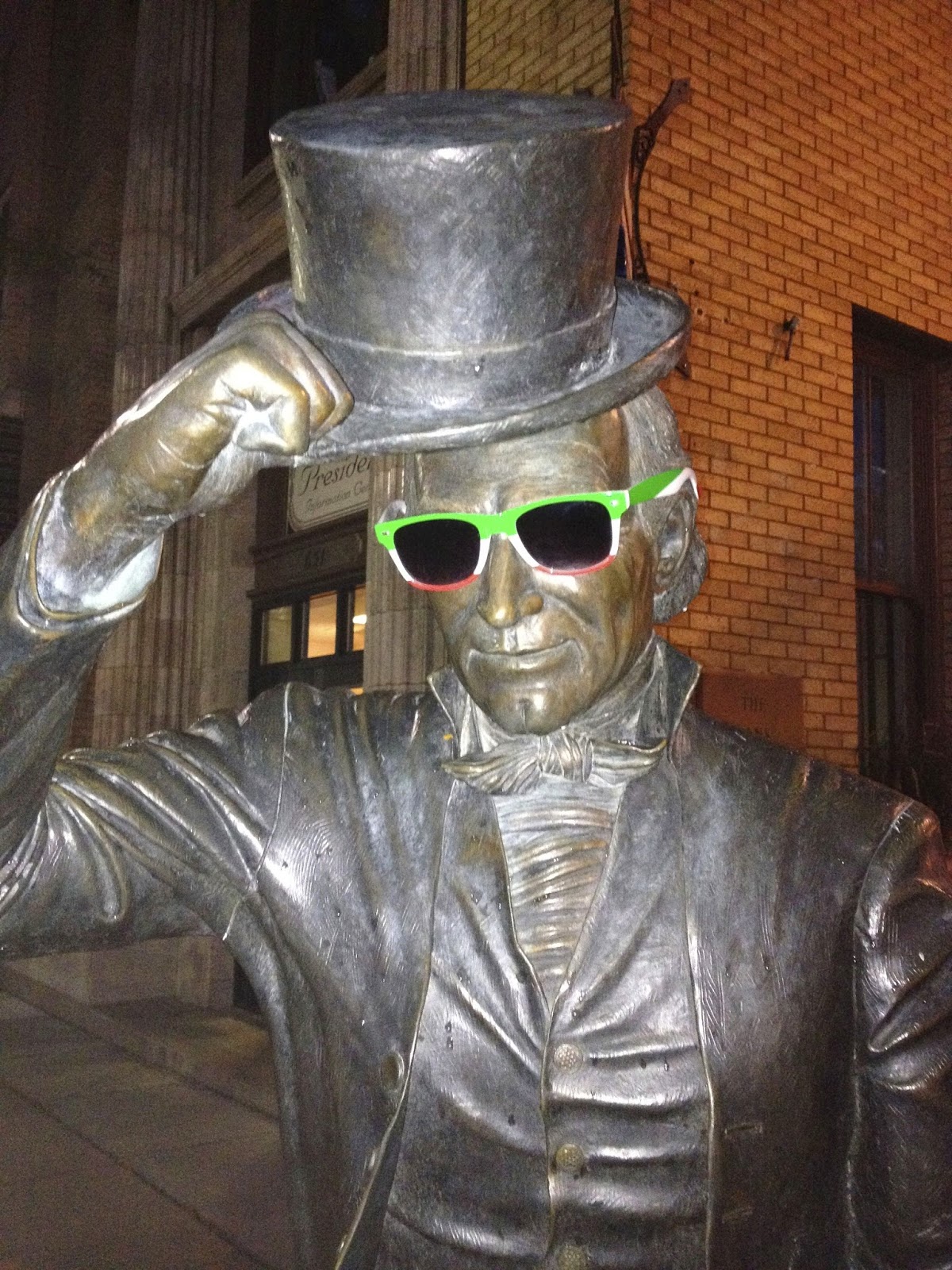 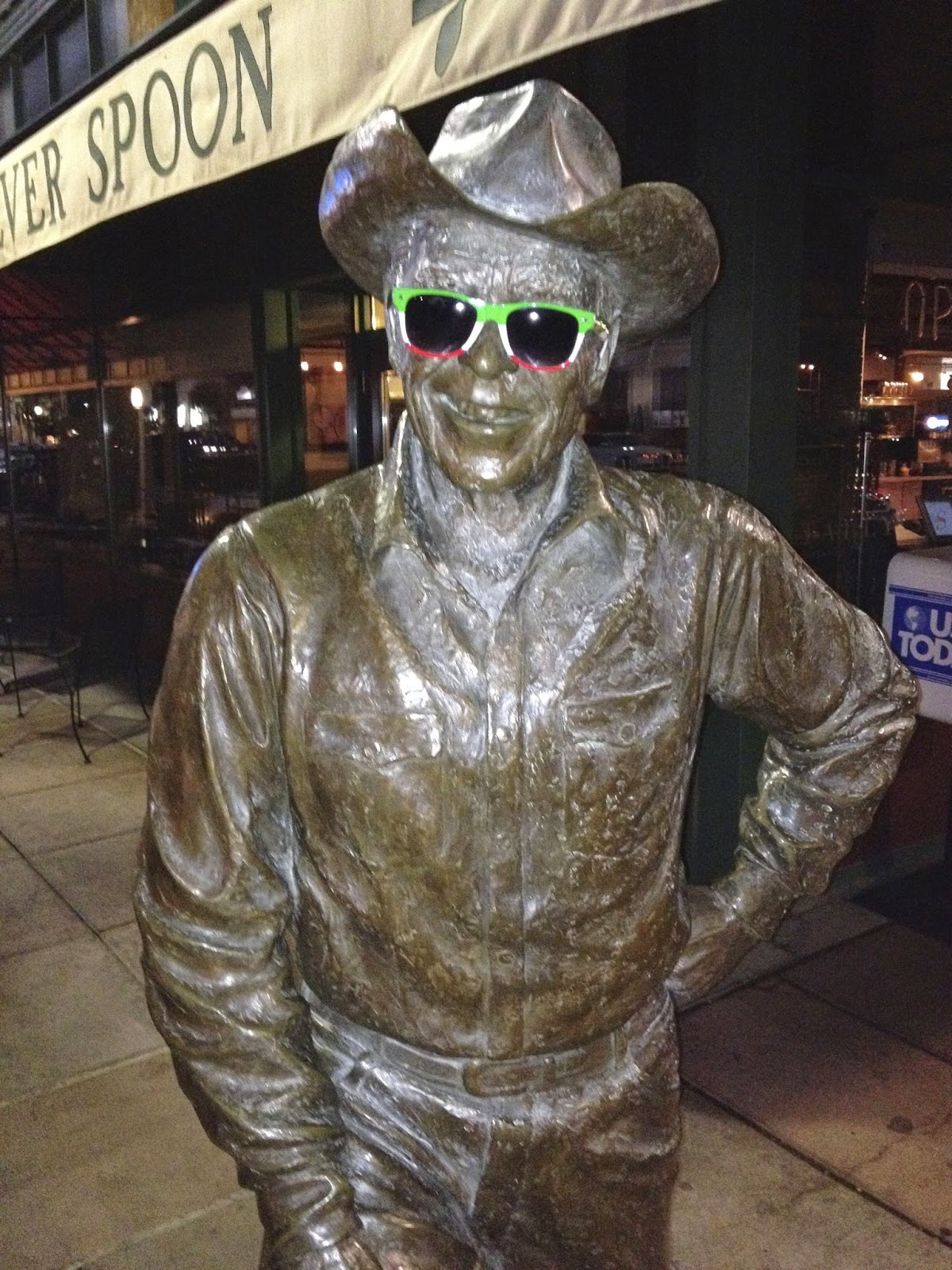 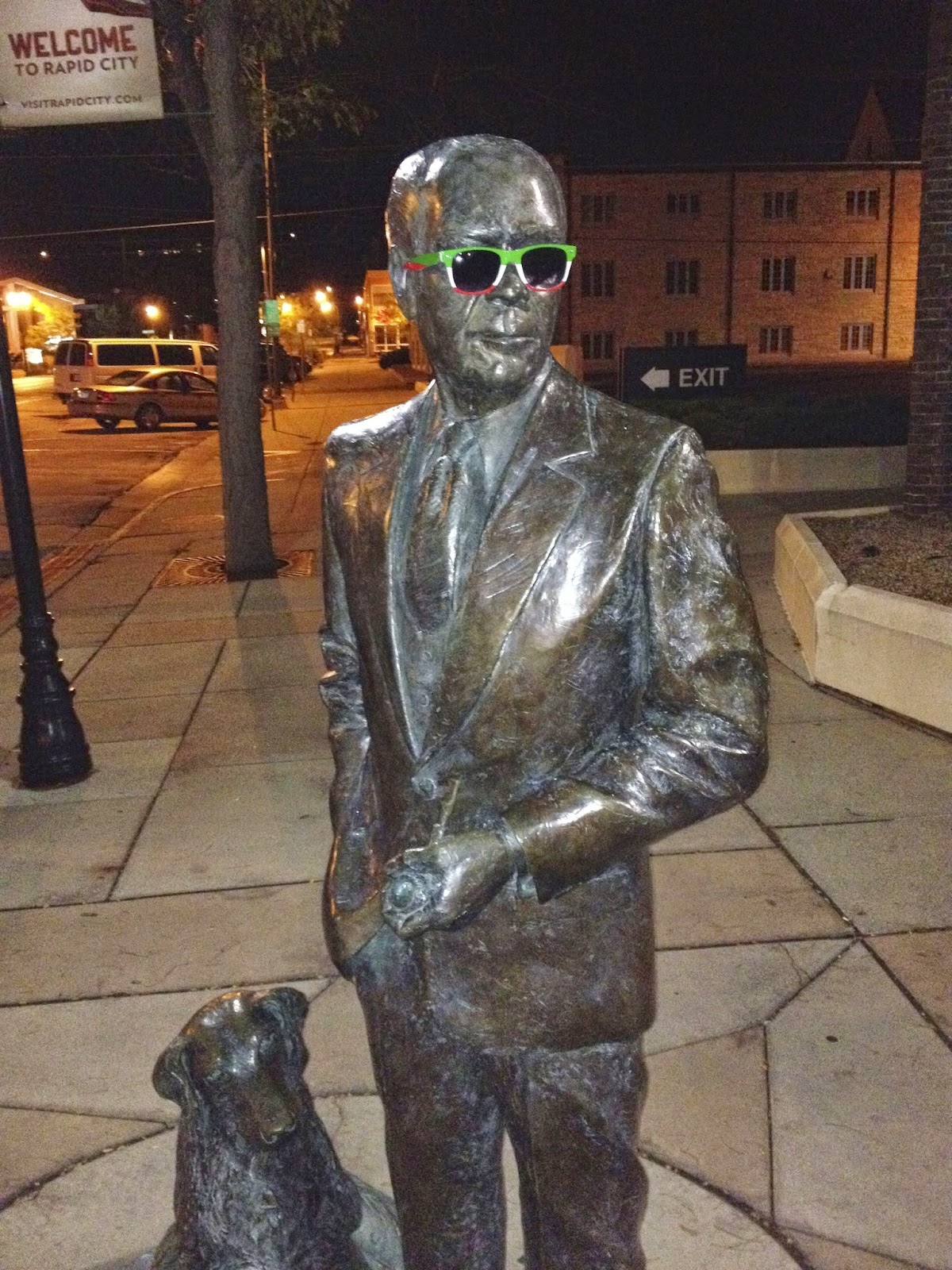 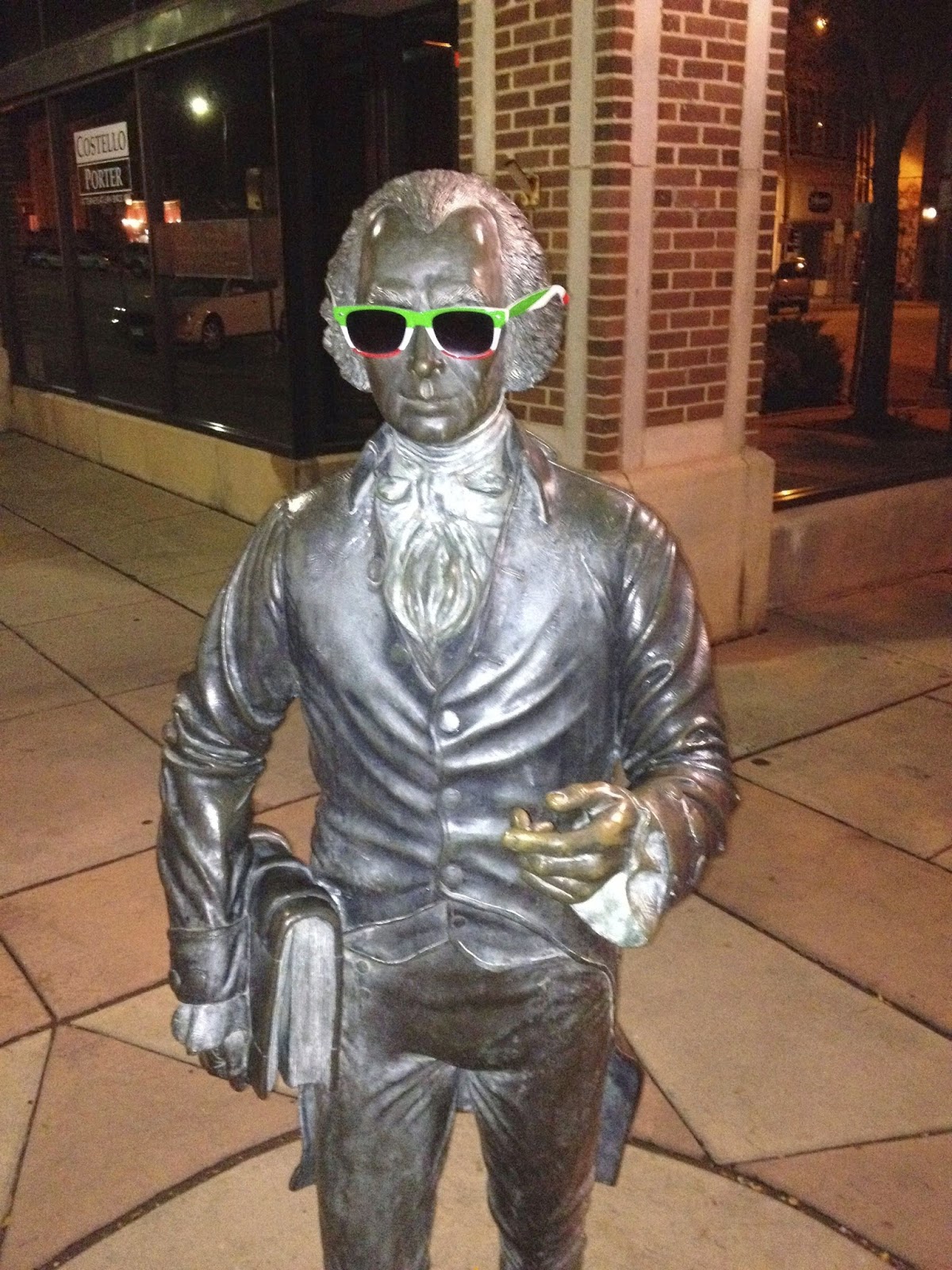 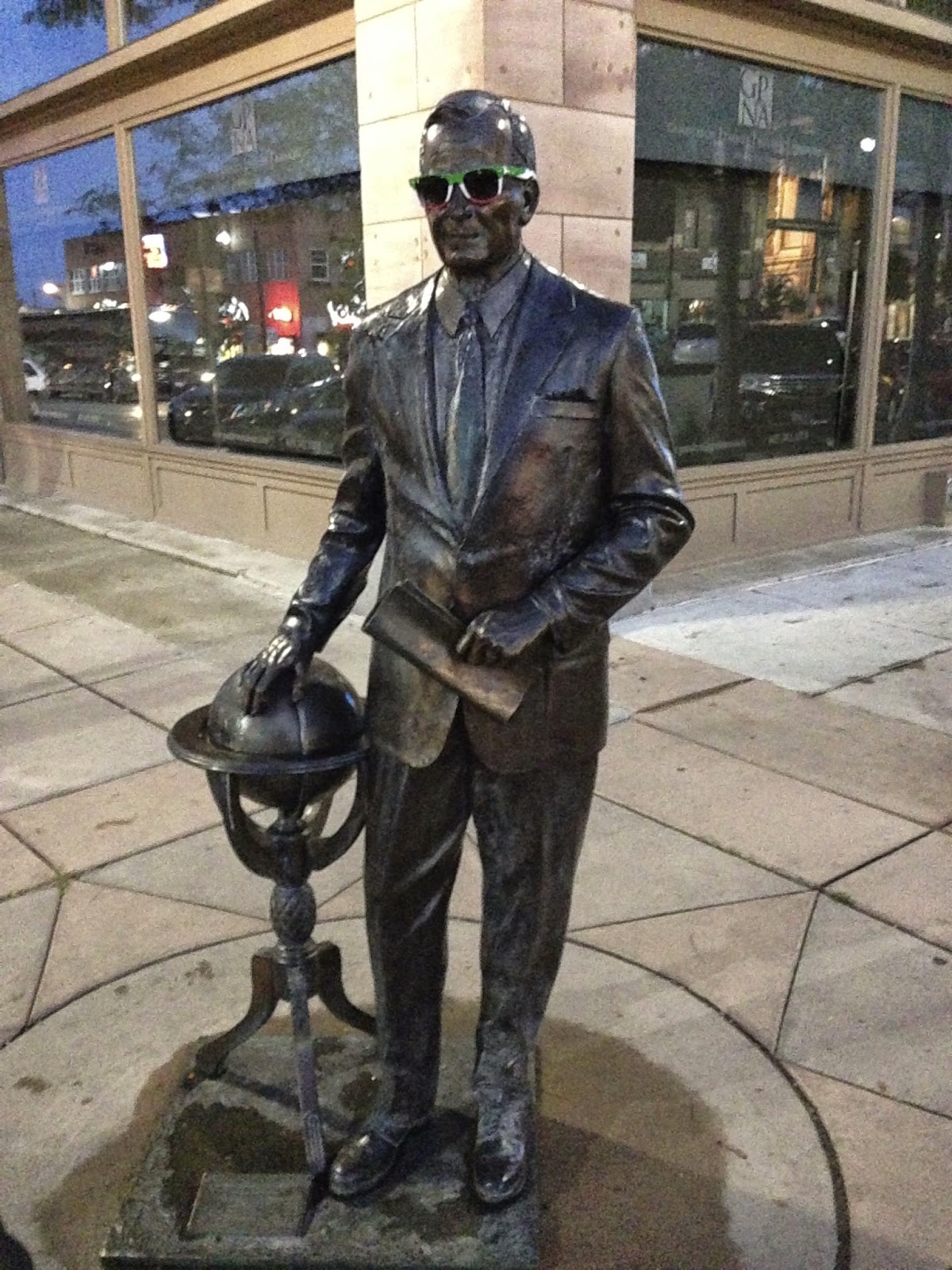 We had a blast taking these photos, and we could have put the glasses on every president in the city if we had the time, but after a few blocks, our pager from the brewery buzzed and it was time to eat.

At first we were delighted by the Firehouse Brewing Company. It was housed in an old firehouse and decorated with many firefighting artifacts. We were enchanted by the history portrayed on the walls, and the vibe of the restaurant was relaxed and inviting.

It didn't take long for our opinion to change.

I am a big fan of beer, and as such, I inquired about whether they had a beer sampler that would allow me to try a variety of their brews. They obliged, with the caveat that we had to try all eight of the beers they had on tap. Twist my arm why don't ya! 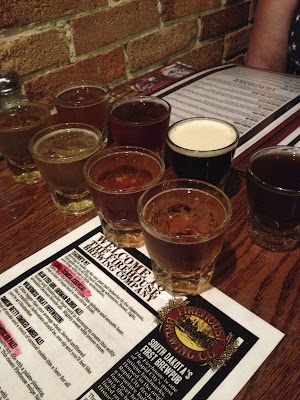 The samples arrived and we took turns trying each one. I couldn't believe how lousy they were. Two of the eight were passible at best, while the other six were undrinkable. Holy cow, their collection was bad! We finished a couple of glasses but left the rest only partially sipped, a true rarity in our beer tasting experience.

I was really hungry and figured the burger I ordered would make up for the disappointing beer samples, as I am also a huge fan of burgers. However, this one was another huge disappointment. The meat was flavorless, the grilled onions were slimy and messy, and the bun fell apart within three bites. Between the nasty beer and the sloppy burger, it's clear why I have to strongly recommend others avoid this place. Oh yeah, and the service was awful as well.

After our lackluster dinner, we took a few more photos of the presidents wearing shades and called it a night. It had been a long, action-packed day, and we were quite tired. What's more, there was lots of South Dakota adventure ahead.

There's one thing that holds us back from true freedom on the road - all the stuff. While it's always wise to pack lightly, there were so many things we needed for the picnics, hiking, camping, exploring and driving that the car was bursting with our belongings. We had created quite a mess in the car over our first two days on the road, so I took a while the next morning to organize things.

Once we had our car in order, it was off to our final destination in South Dakota - Mount Rushmore. On our way, we drove through the center of Rapid City again, and I couldn't help but hop out and take a few more photos of the commanders in chief wearing sweet shades. 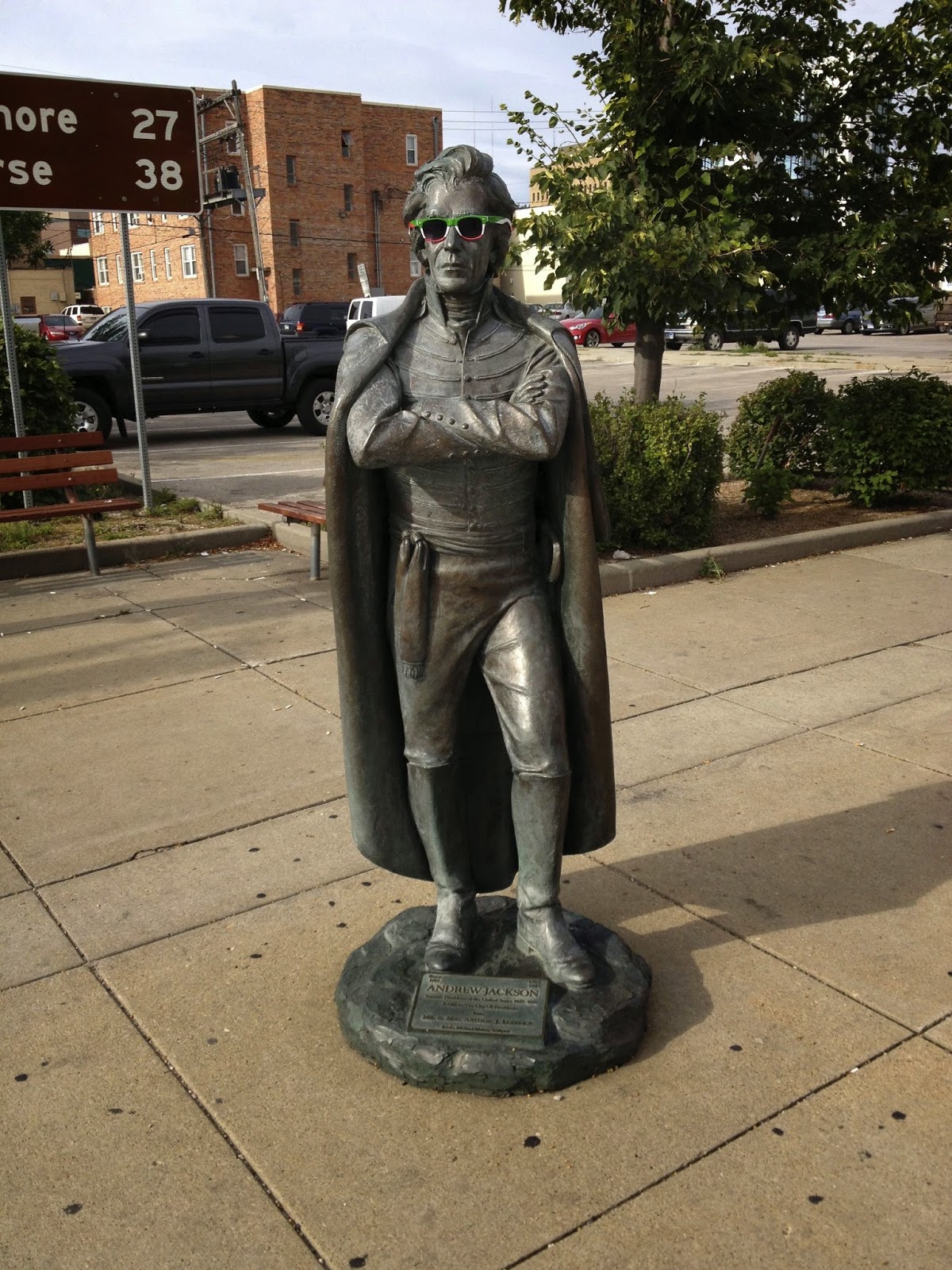 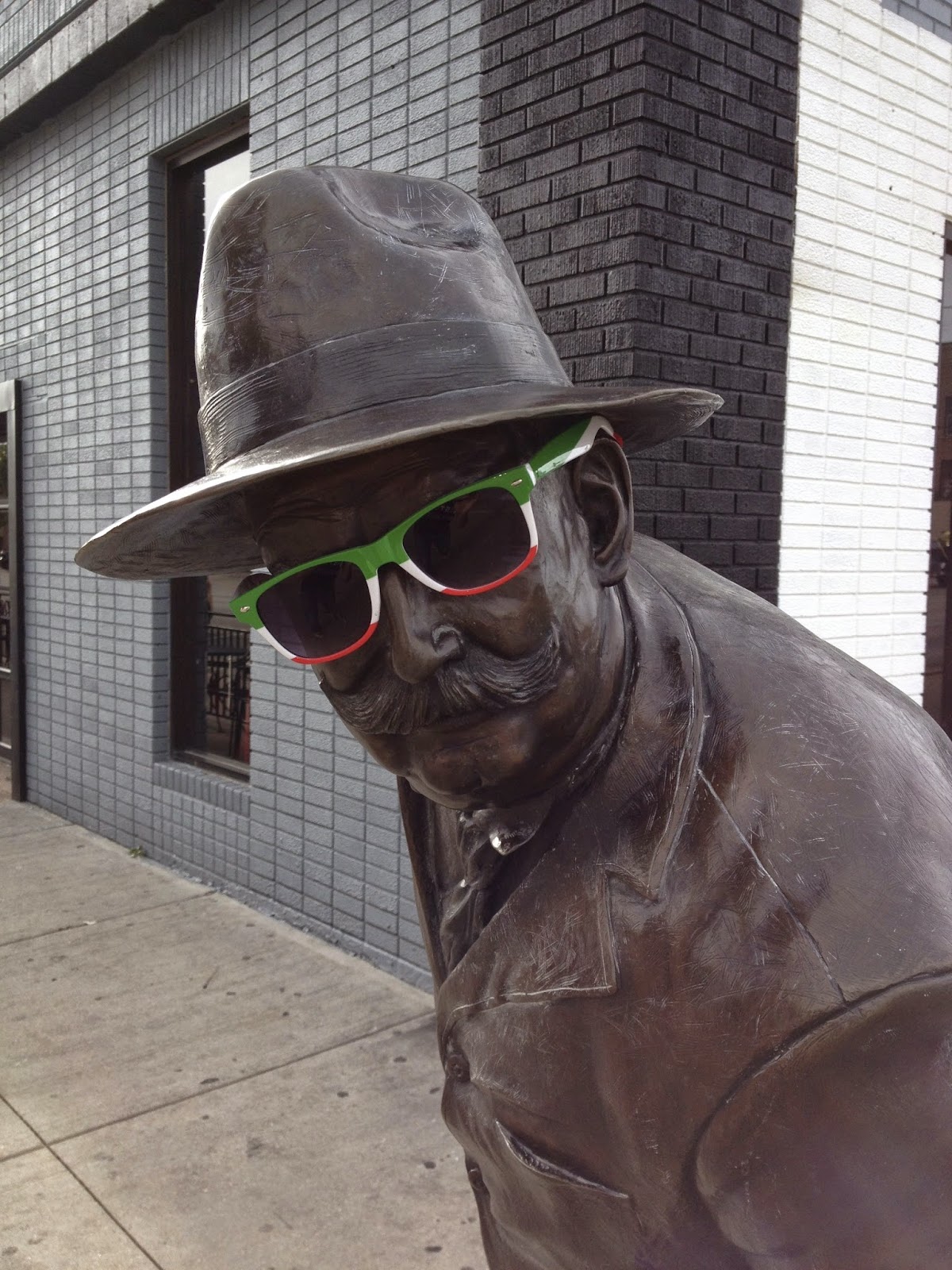 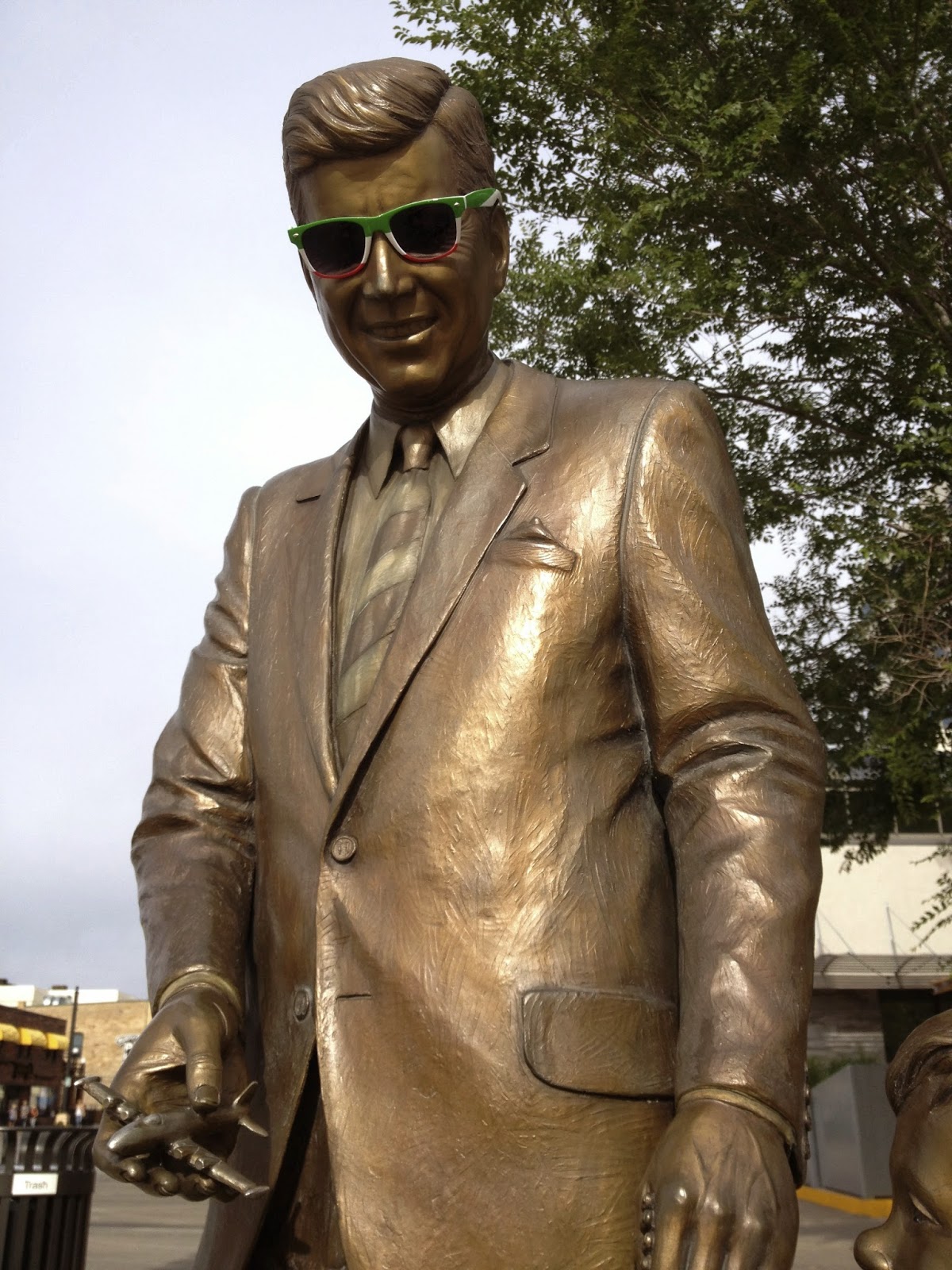 I had been to Mount Rushmore once before, during the all-night drive through South Dakota I mentioned in Part 1. That time we stopped by late in the evening and got there just in time to see the presidents before the park closed. We stared at this famous statue for a while and then called it a visit. On our way out, I turned around to catch one more glimpse, only to find that it had disappeared. The huge lights that illuminated the statue at night had been turned off, and it looked like Mount Rushmore wasn't even there anymore. After that visit, I had decided that Mount Rushmore was one of those attractions you show up to, stare at, say "well, there it is," and then go on with your life.

The second time around was a more enriching experience, and I realized there's much more to do there than just stare at the famous rock carving.

It was Labor Day, so the place was packed. We navigated heavy traffic and managed to get a bad ass parking space in the garage thanks to my savvy (lucky) driving skills.

As we approached the presidents, we came upon one my favorite aspects of this place - the long row of state flags, with every state in the union represented. I don’t know what it is about this collection, but it is a really cool sight. 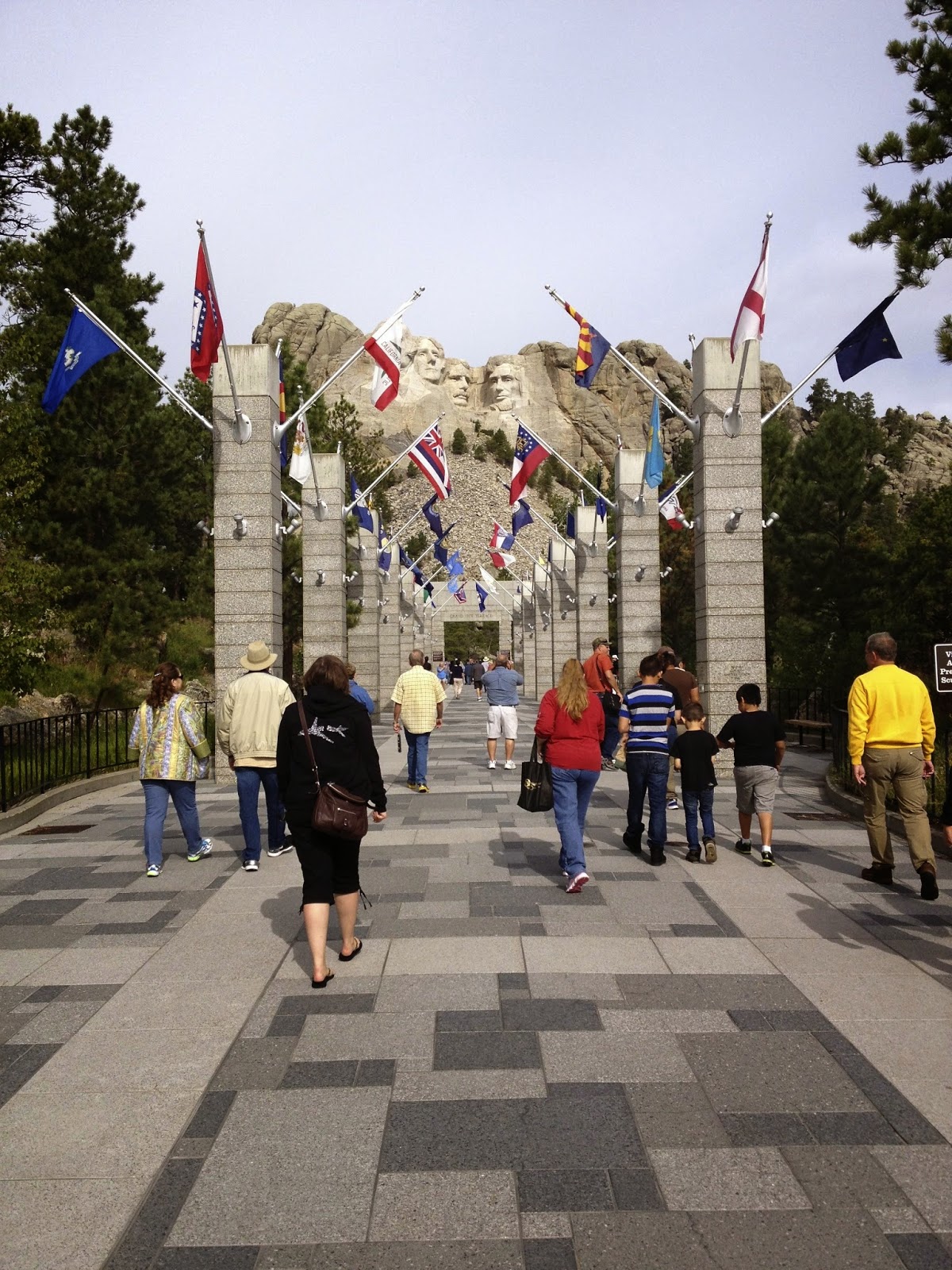 Once we got past the flags, we got a clear, full view of Mount Rushmore. This sculpture really is something to behold. It's huge and detailed, and the rubble that lies below gives some insight into the challenges the creators faced while carving it. We were able to get an unobstructed view despite the large crowd, so we took our sweet time and shot many photos. 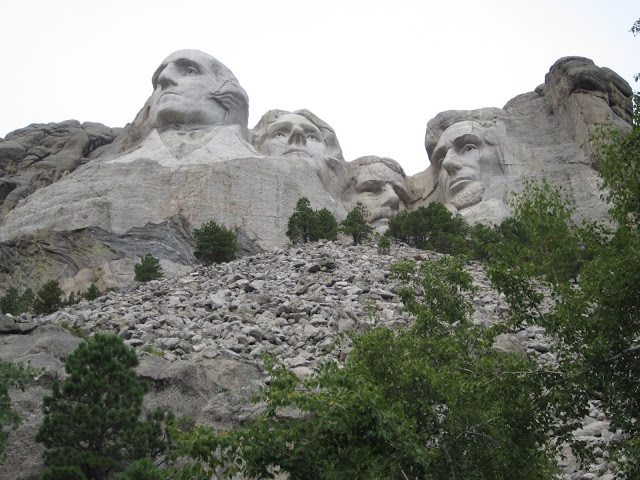 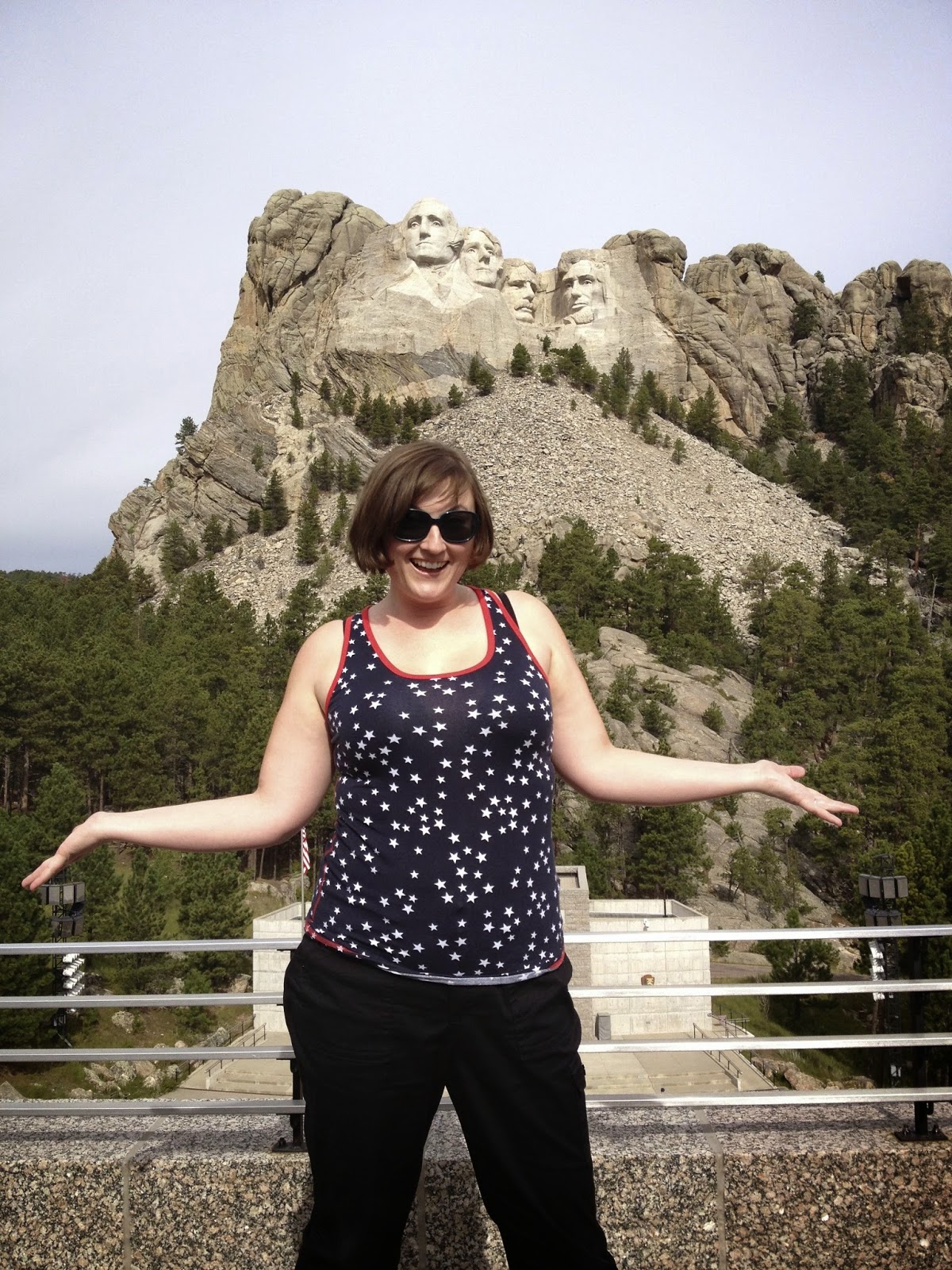 One major feature of Mount Rushmore I missed when I visited the first time was the nature trail on the grounds. This trail was less than a mile long and was only mildly challenging, and it gave us a clear shot of each president. It was a fun jaunt that I recommend for anyone who visits. 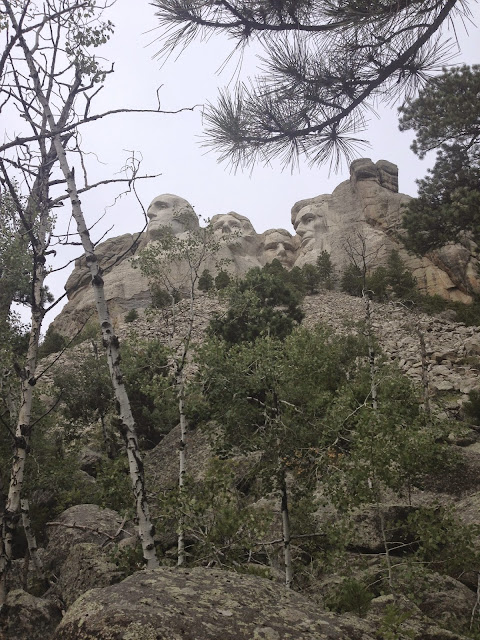 At one point along the trail we arrived at a stand-alone building that focused housed a museum about the making of Mount Rushmore. My favorite part of the museum was a replica of the original design of the sculpture, which featured the presidents from head to toe. Sculpting the rock was too difficult to achieve this, so they settled for sculpting just the heads. I also learned that Jefferson was originally slated to appear to the left of Washington, but again, the terrain prevented them from achieving this, so they blew up TJ's face and moved him to Washington's right. You can still see the area where Jefferson's face was supposed to appear.

After hiking the trail, we stopped at the gift shop, where I bought a miniature statue of Mount Rushmore - a great addition to my collection of miniature versions of famous landmarks. Mrs. Tires had behaved very well that day, so when we were done shopping, I decided to treat her to ice cream. This turned out to be an epic stop, as the soft serve was rather famous. The frosty treat was created using Thomas Jefferson's own ice cream recipe. Based on the enormous size of the ice cream, I think it's safe to say TJ loved soft serve. It was taller than Mrs. Tires' head and took more than an hour to eat. 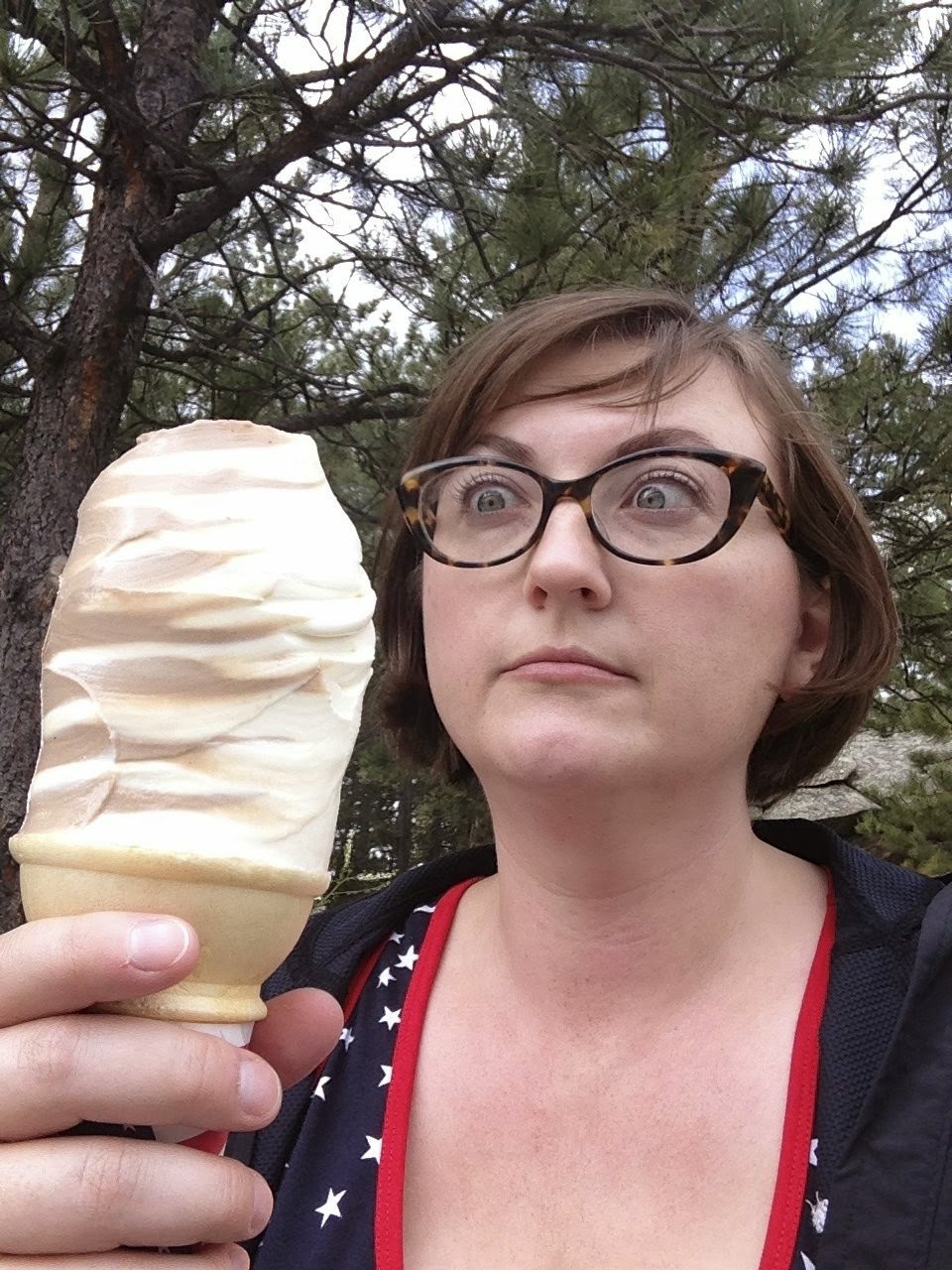 We weren't sure whether we'd have time to squeeze in an additional stop that day, but we made the decision to go for it anyway and drive from Mount Rushmore to Devils Tower in Wyoming. This decision paid immediate dividends, as the route to get there took us through the Black Hills National Forest. The drive was absolutely stunning, and it eclipsed the beauty we had seen so far on the trip. It also featured a unique stop-off that afforded a profile view of George Washington. 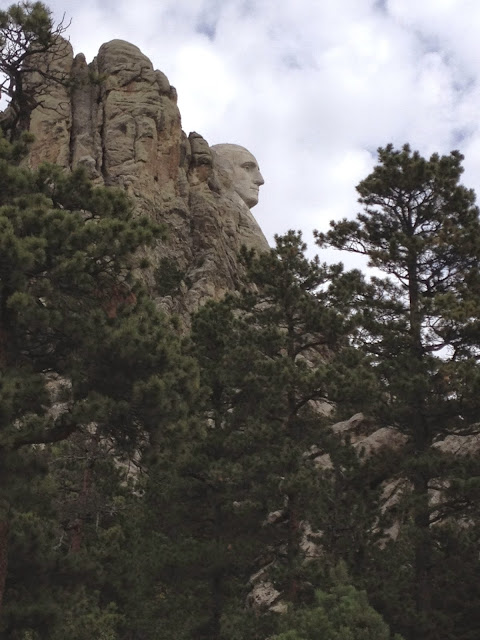 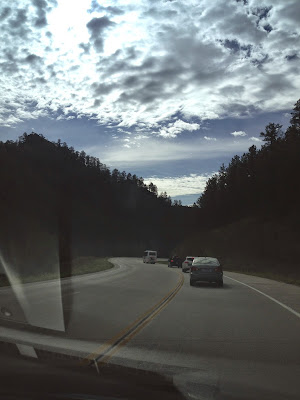 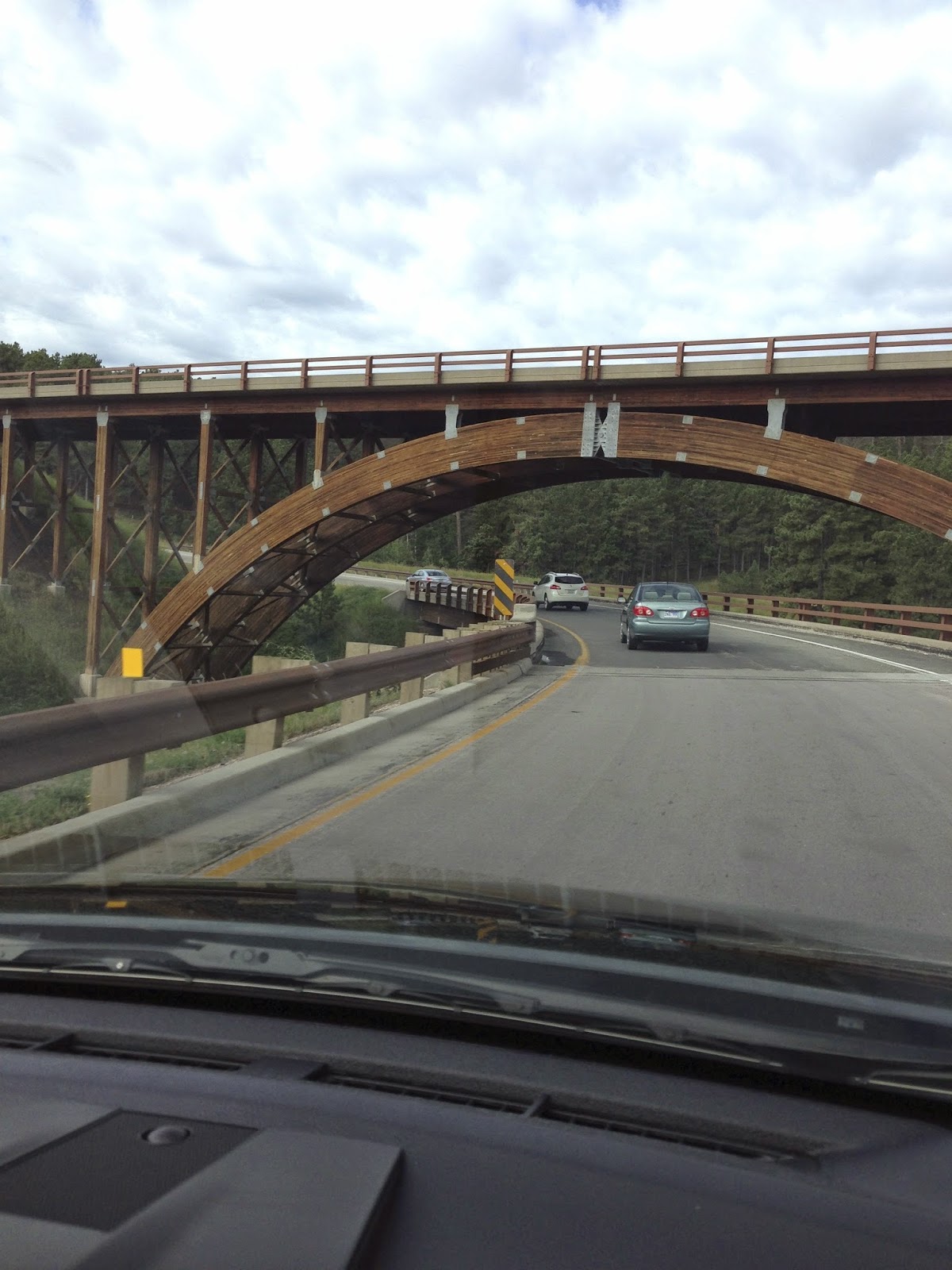 I was pleasantly surprised by how much fun we had in South Dakota. What's more, it was clear that there is much more to see in the state, including state parks, scenic drives, a winery featuring rhubarb wine, and lots of family fun. I would gladly go back to South Dakota to see more, and I hope to cover the entire region at some point in my life.

Must See in South Dakota:

More on this Journey: