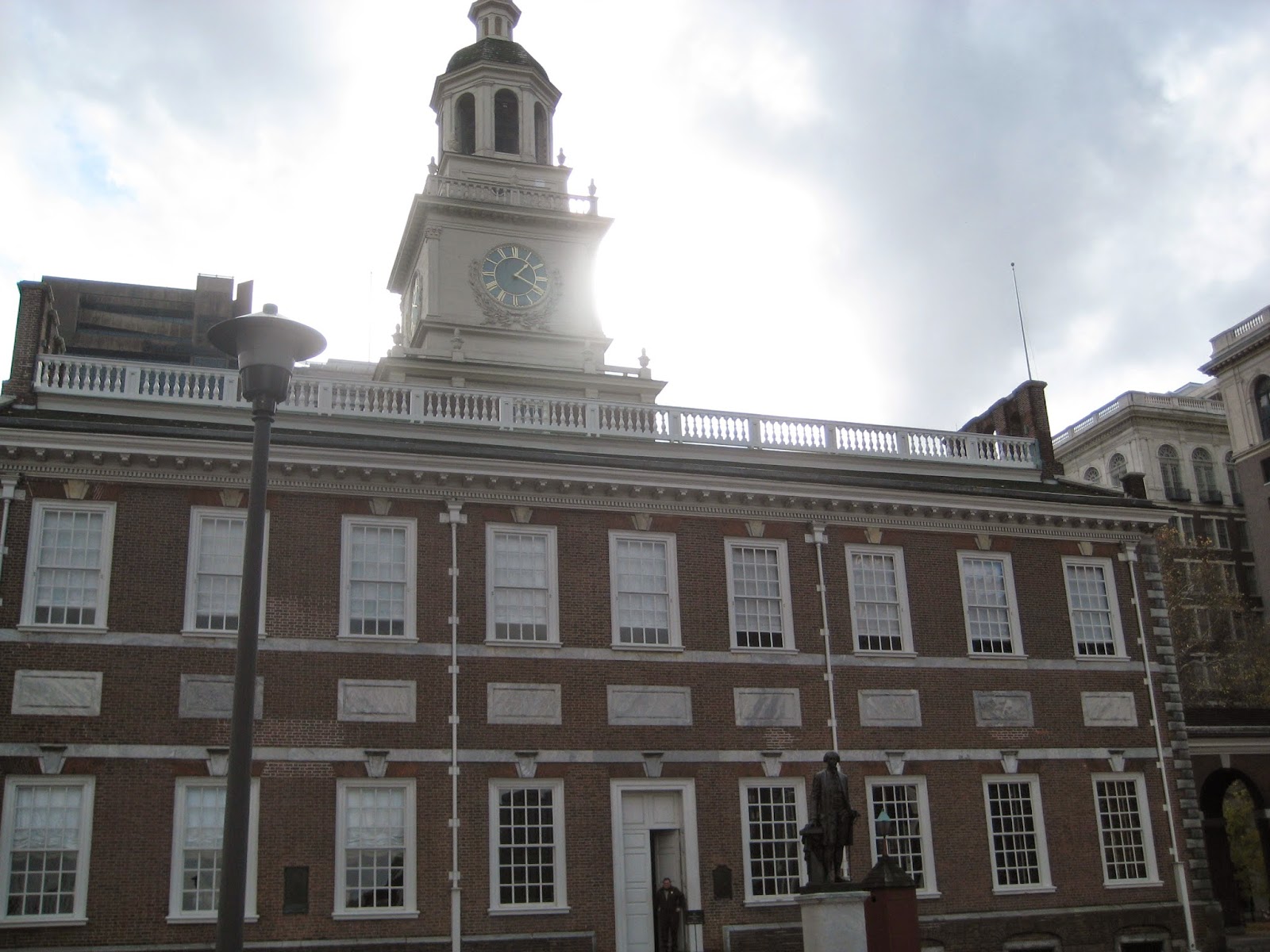 Pennsylvania is a fantastic state for road tripping. Philadelphia and Pittsburgh are fascinating cities, and the points in between are beautiful. I've had several adventures while cruising through this state, each of which has been exciting and memorable in its own way.


My first trip through Pennsylvania was with my college sketch comedy group Casual Sketch in the spring of 2000. We were on our way to perform at a comedy festival at the University of Miami, Ohio. My friend Adam was riding shotgun. Being a native of Pennsylvania, he proclaimed himself to be an expert at navigating the state. Additionally, he was convinced that Pennsylvania cops turned a blind eye to speeding, and as such, our stint through the state would be a great opportunity to hit the gas and save some time. I was suspicious of this claim and refused to test it while I was driving, so when we pulled off at the first rest stop in Pennsylvania, he took the wheel and I took shotgun.  From there we gunned it down the highway, hitting speeds upwards of 90 MPH.


It didn't take long before Adam's theory of lax law enforcement was proven wrong. Flashing blues caught up to us after about ten miles. The cop was not kind, and he clearly got a great deal of satisfaction from writing us a $250 ticket. In the process, he asked for our registration and proof of insurance. I reached for my wallet to produce the insurance card, only to realize the wallet wasn't in my pocket. I searched the car frantically as the cop lectured us, but the insurance card - and the wallet - were nowhere to be found. There was only one explanation. It must have fallen out of the car when we switched drivers.


After accepting the ticket, we doubled back and returned to the rest stop, driving at a much more reasonable speed this time. Sure enough, the wallet was sitting on the ground in the rest stop parking lot. The speeding ticket was a total bummer, but clearly we deserved it, and without it, we could have driven hundreds of miles before I noticed my wallet was missing.


The rest of the trip was plenty eventful. It included a bizarre interaction at a Burger King that's detailed in the post on Ohio, and a kick-ass show at the comedy festival which would be our first taste of success as a group. On the way back, Adam was inspired to drive for fourteen hours straight. At 3:00 AM, he put Pink Floyd's Dark Side of the Moon in the CD player and blasted it as we cruised up the Merritt Parkway. That was the first time I had heard the album. I'd go on to listen to it about eighteen thousand more times over the next fifteen years.


About a year after my first encounter with Pennsylvania, Adam and I were sitting in our friend Jeremy's dorm room and the three of us had just started watching the Big Lebowski. As the opening credits rolled, we started talking about dinner, and Jeremy brought up his craving for cheesesteak. Adam said he knew where to get the world's best cheesesteak. It was a mere five hours away. This sparked an idea that's completely idiotic by conventional standards, but downright brilliant to college students who are adventurous and hungry. Road trip! We turned off the DVD player, grabbed some provisions, picked up Jeremy's girlfriend Senofer, and hit the road to Philadelphia.


After an antic-filled drive that included stopping at the signs that announced the arrival of each new state, we arrived in Philadelphia at about 4:30 AM. In the pre-dawn hours, I could already tell that Philadelphia was a vibrant and bizarre city. Colorful murals appeared on every street corner, and two-way roads were separated by a row of cars parallel parked in the center of the street. 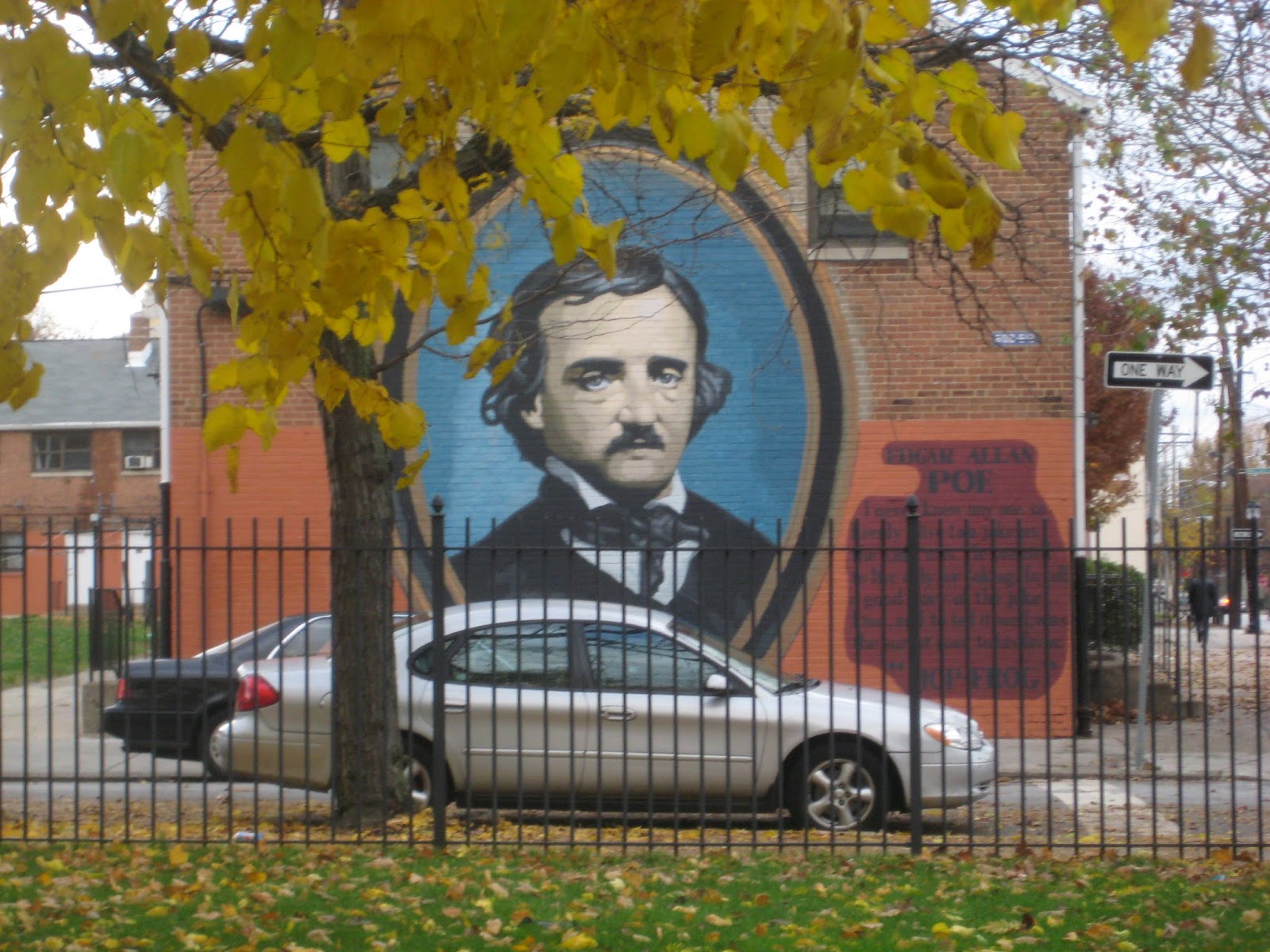 Eventually we made it through the city and arrived at our destination, Pat's King of Steaks. This place is not just an eatery, it's a Philadelphia institution. Pat's has been around for eighty-five years and it claims to be the inventor of the cheesesteak sandwich. Fortunately for us, it's open twenty-four hours a day.


Ordering a cheesesteak at Pat’s is a ritual akin to that of the soup nazi from Seinfeld. One must swiftly specify their cheese and onion preferences, and then scoot over to the next window to order drinks and sides. I recommend a “cheez whiz wit," which is short for a steak sandwich with cheez whiz and grilled onions. Cheez whiz is nasty on its own, but it is absolute heaven on a cheesesteak sandwich. 'Wit' is short for 'with onions.' You can also order them 'witout.'


The result is a delicious sandwich featuring tender, juicy steak, delicious melted cheese, and tasty grilled onions on a toasted bun. It's a fantastic meal that was made even better by the journey we took to obtain it.


Across the street from Pat's lies Geno's Steaks, a flashier steak shop that lacks the character of Pat's but somehow features longer lines. Which shop has the better sandwich is the subject of much debate among Philadelphia locals. If you meet someone from Philly, you can bond with them instantly by asking them, "Pat's or Geno's?" Pat's has a clear viewpoint on the matter... 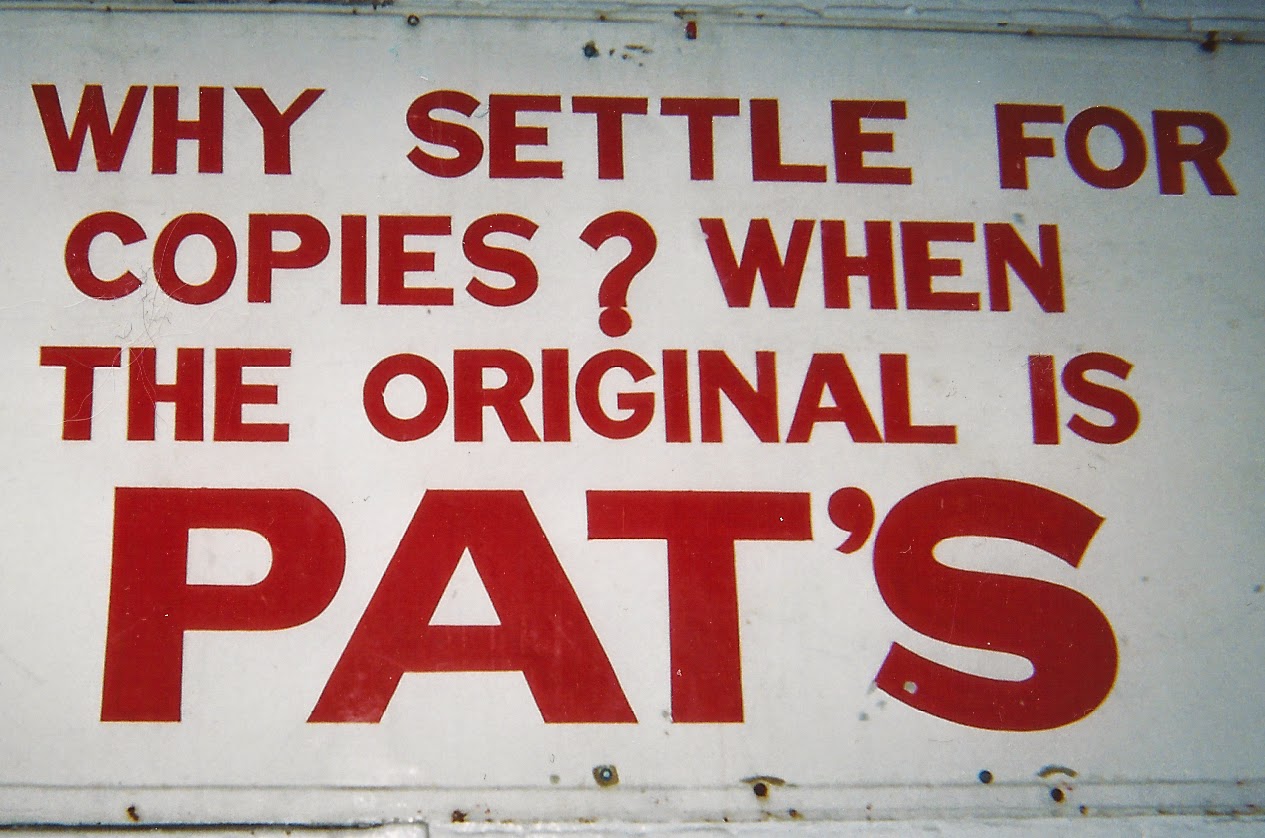 This trip was a point of pride for me as a budding road tripper. It was an insane thing to do, and yet it brought me somewhere I had never been before, and now it makes for a great story. I'd do it again. In fact, I did. We repeated the trip a year later. 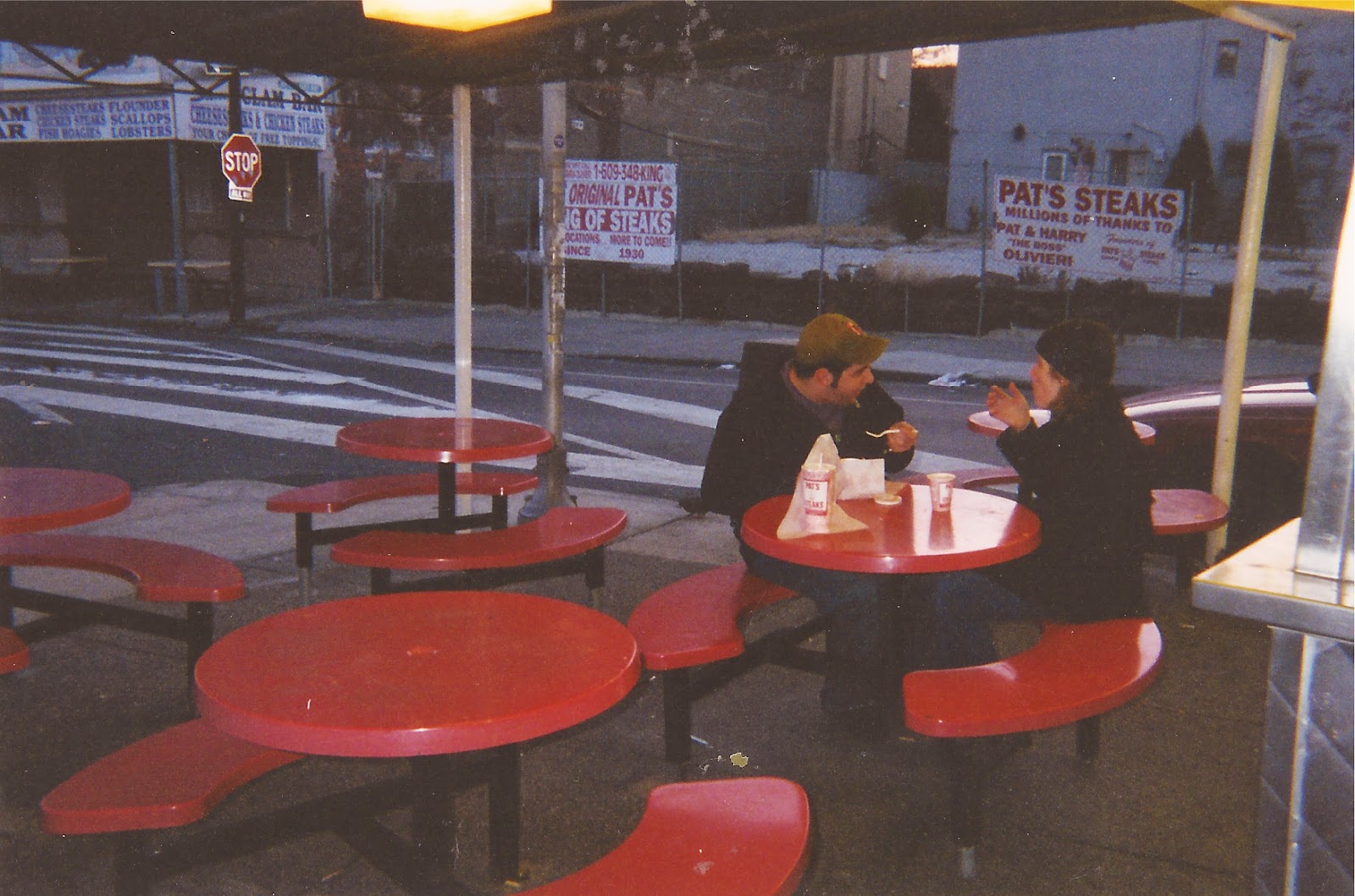 In December of 2003, I flew from Chicago to New Hampshire for Christmas and Hanukkah. Holiday travel was absolutely nuts that year due to a combination of a labor strike and several airline employees calling in sick. My flight out of Chicago was delayed significantly, so by the time I got into Philadelphia, I was too late to catch my connecting flight to NH. Faced with the possibility of sleeping at the airport that night, I decided to call Adam, who was home in Pennsylvania with his family. He was kind enough to pick me up at the airport and bring me to his parents' place for the night. Along the way, we stopped at Pat's for cheesesteaks.


I got a chance to explore Philly more thoroughly when my comedy group Dirty Water made the trek from Chicago to Philly for the Philadelphia Improv Festival in the fall of 2008. As we drove a rented minivan through Ohio on the way to our destination, we were greeted by flashing blue lights and an invitation to pull over and chat with Ohio law enforcement. I was clearly going over the speed limit, but when he questioned me, I played dumb and acted as though I had no idea of the acceleration guidelines. Much to the surprise of everyone in the van, the act worked and he let us off with a warning. It may have helped my bashful performance that I was sporting a breathe-right strip during our conversation. 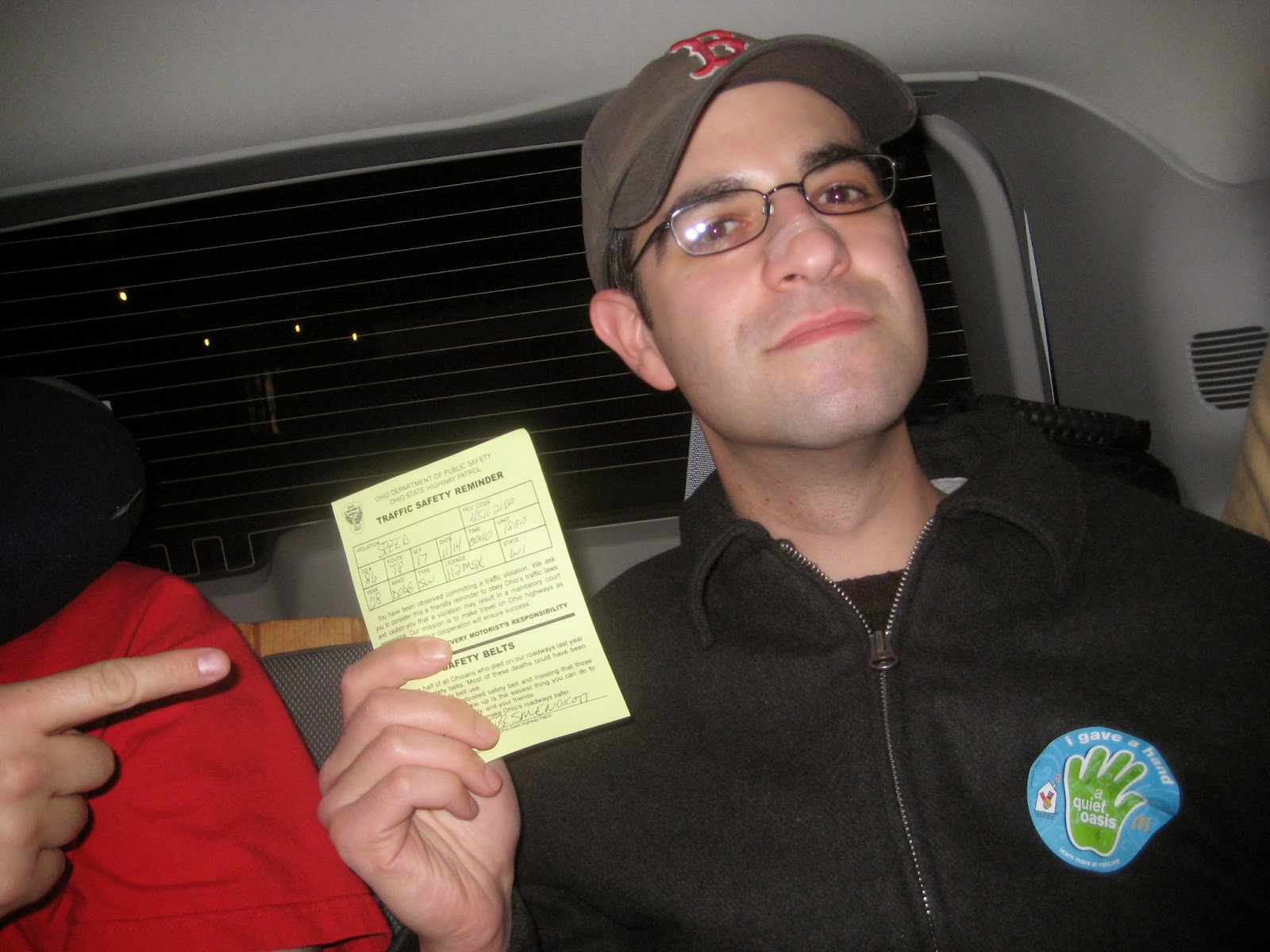 The next day, we had some time to explore Philadelphia. We started our day at the Independence Mall, which is home to a cluster of historic sites. The area is anchored by Independence Hall, which is pictured at the beginning of this post and is famous for hosting our country's forefathers while they declared independence from England and established our country. Other attractions in the area include Betsy Ross' house, Christ Church (where our county's forefathers went to get their God on), the Graff House (where Thomas Jefferson wrote the Declaration of Independence), the US Mint, and the Liberty Bell. We wandered around this area for a couple of hours, enjoying the sites from the outside. The whole area is beautiful and inviting, and it made for a wonderful stroll. Independence Mall reminded me of the Freedom Trail in Boston, only Independence Hall is maintained much better, it's easier to navigate, and the manicured bricks are much less likely to break your ankles than the cobblestones in Beantown. Personally I'm not much of a history buff, but anyone who is could spend days exploring Independence Mall's many sites, inside and out. 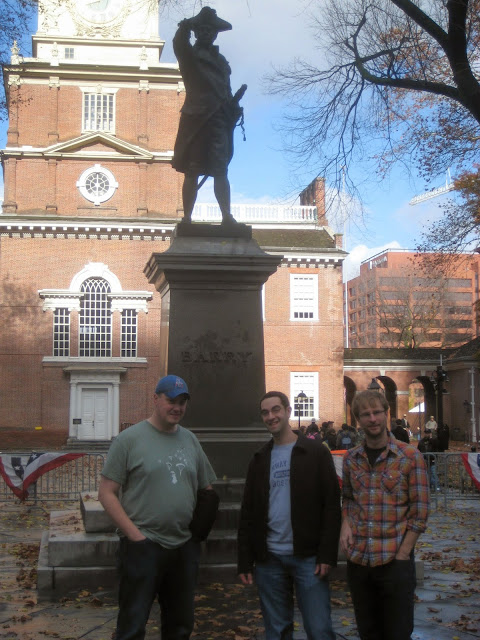 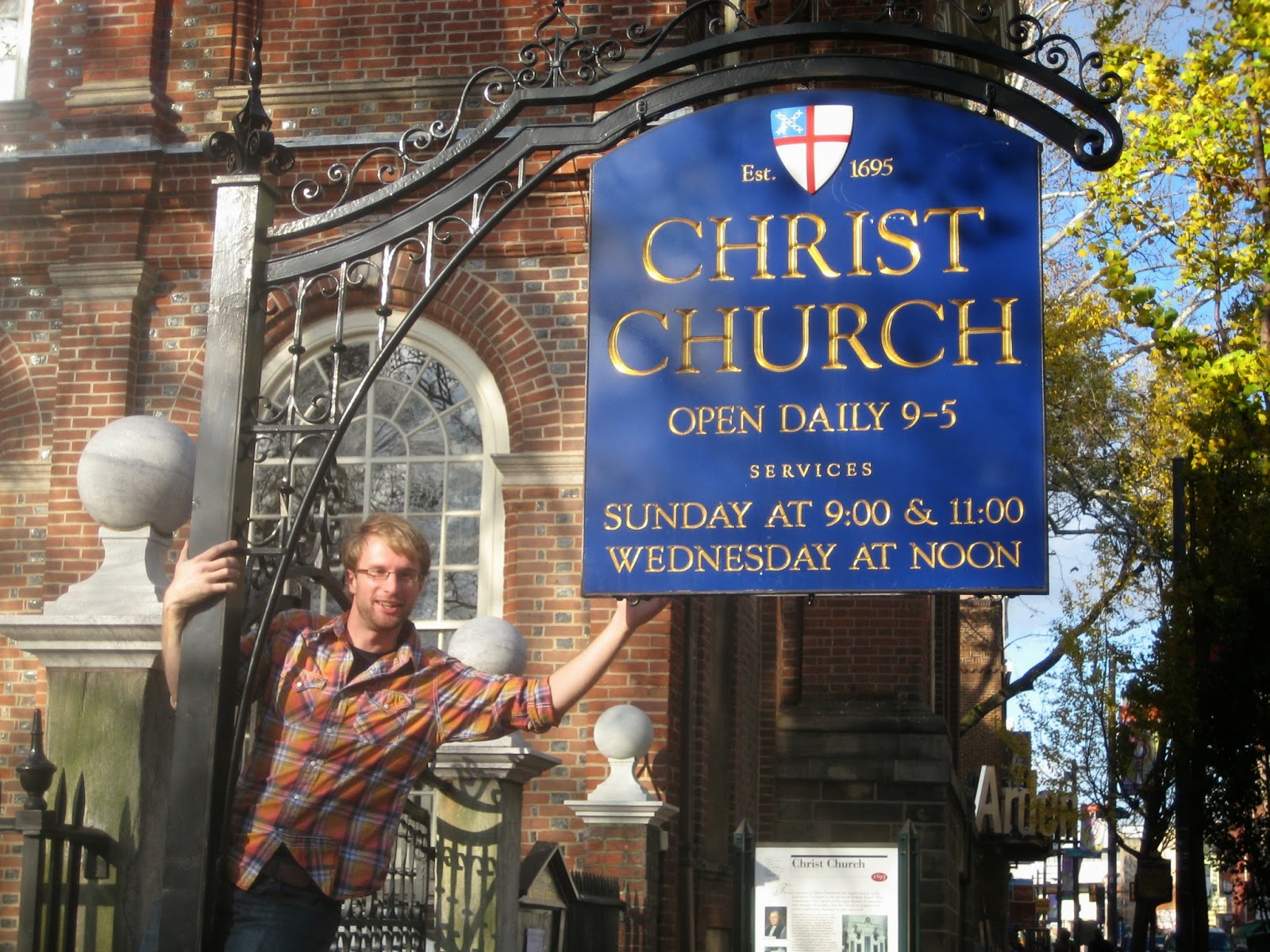 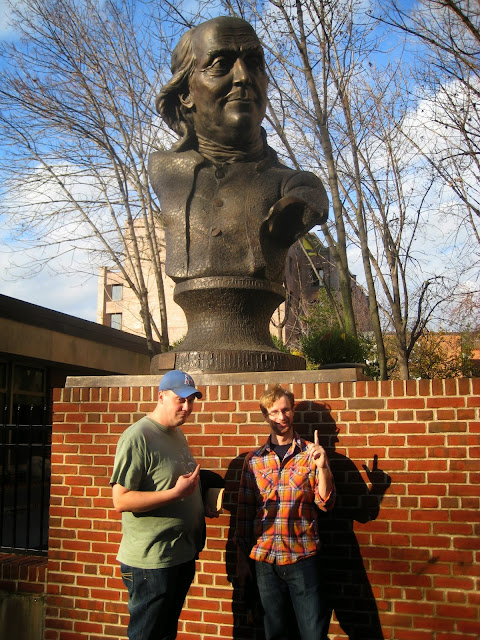 While perusing a gift shop in the area, I noticed a postcard advertising another historic site - Edgar Allen Poe's house. Being a big Poe fan, I somehow convinced the rest of the group that we should check it out. We hoofed it to the house and joined a free tour. The price was right. While it was cool to be at one of my favorite author's former abode, the attraction was little more than an old, empty, furniture-less rickety house that was all-in-all rather disappointing. Still, we managed to have a few laughs. 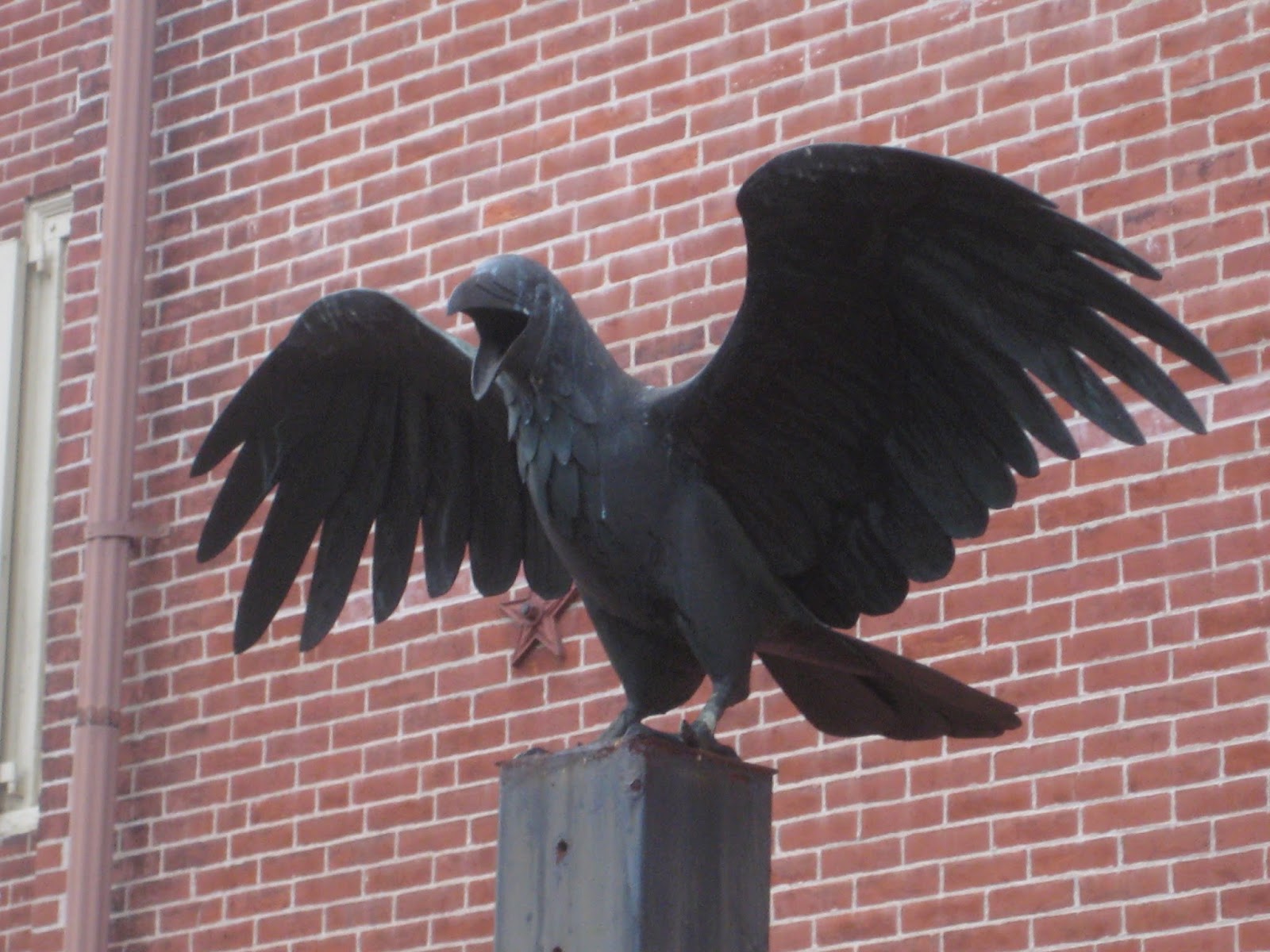 With our quota of historic sites now officially filled, we got a recommendation from a local to head to the Eulogy Belgian Tavern. This cozy bar fit our needs and then some, with a menu of 400+ beers and a reputation for outstanding oysters. We shared a bucket of these delicious mollusks and sipped a variety of brews. While it was tough to choose just one or two pints from the gigantic menu, I struck gold by choosing a Lancaster Milk Stout. It turned out to be literally the best beer I had ever tasted. 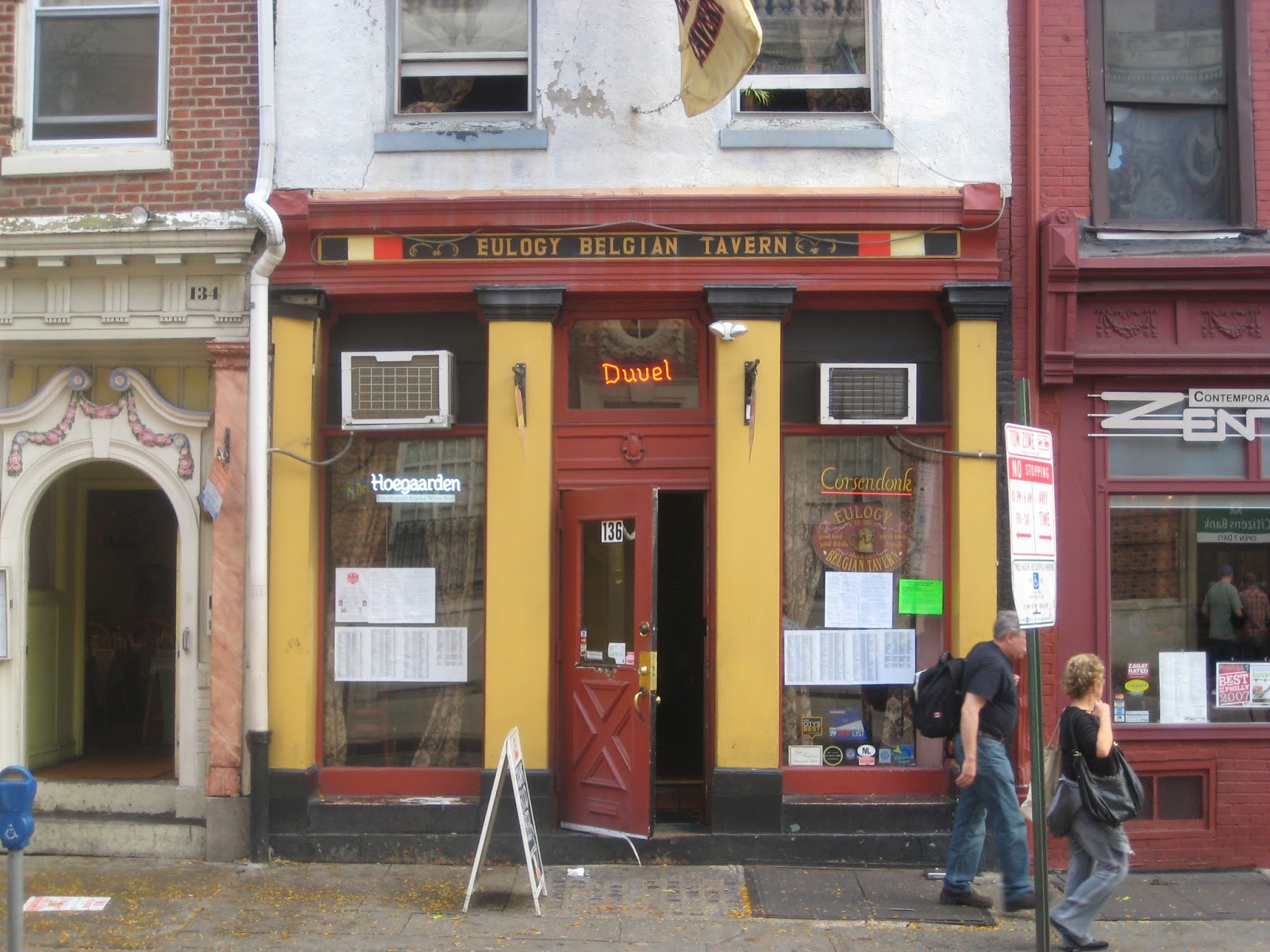 After our stop at the Eulogy Tavern, we said goodbye to our time as tourists and started the clock on our time as performers by heading over to the theater for our Saturday night set. To be honest, I really don't remember how the show went. They all blur together after a while. Let's just assume we were hilarious and the whole festival loved us.


After the show, the group split up for a while, and I hung out in the theater to catch the next round of performances. While most of the groups at the festival were fantastic, the last show of the evening was a dud, and as it went from bad to worse, I hatched a plan to sneak up to the after party early, stake out a spot, and grab an early beer. Leaving another group's show is generally frowned upon, and the party was not supposed to kick off until all of the shows were done for the evening, but what can I say? I was thirsty! As I stealthily snuck upstairs, I wondered if I would be the only one there. Turns out I was not - the rest of Dirty Water was already up there, yukking it up and getting the party started.


Don't think for a second that we managed to skip the cheesesteak during this trip. We made two stops at Pat’s during our stay, and though we had to leave early in the morning on Sunday, we managed one more stop at Pat's on our way out of town.

Check out Pennsylvania, Part 2: Pittsburgh
Posted by Unknown at 7:14 PM