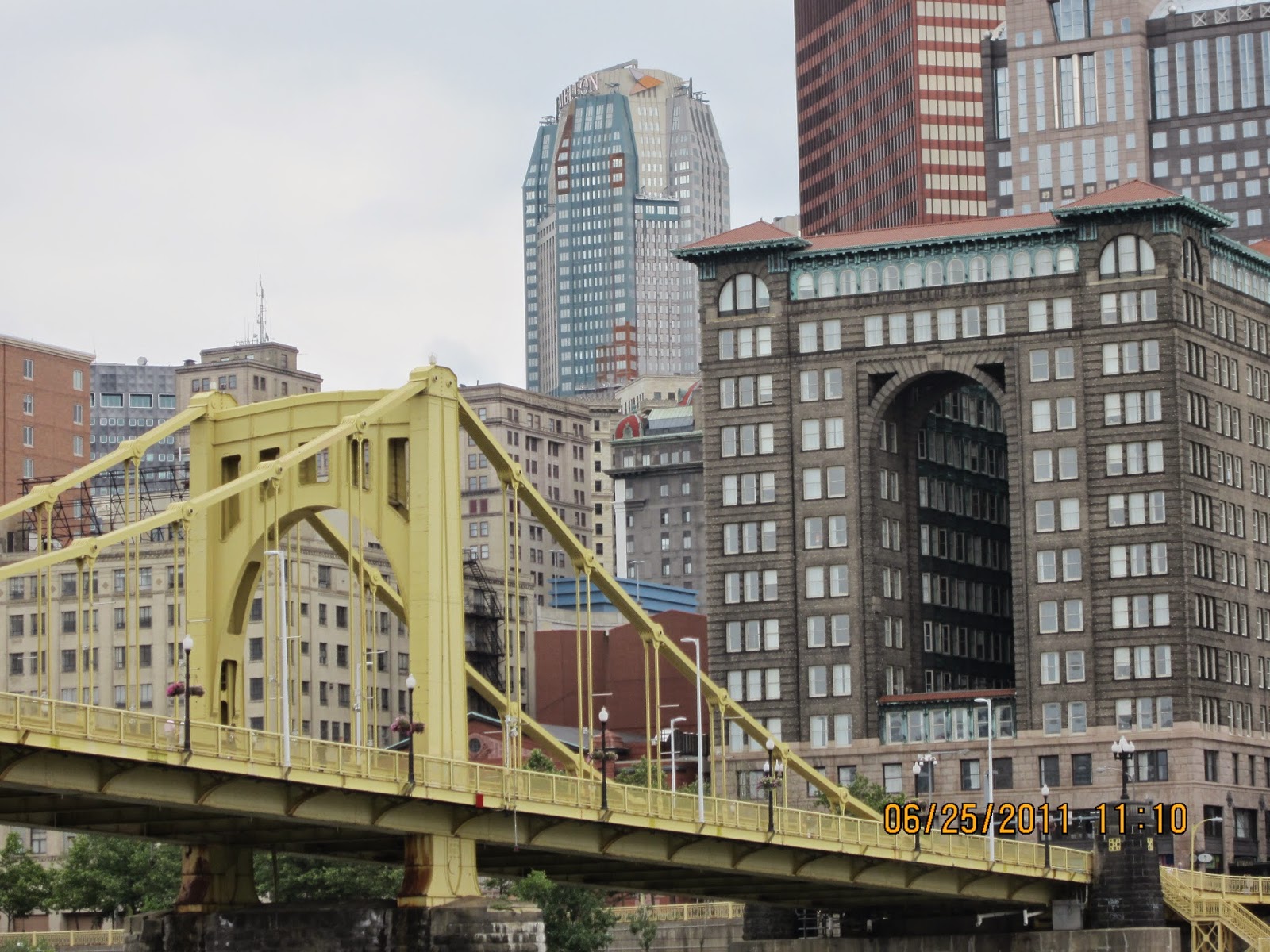 My love of stadium chasing reached a fever pitch in 2011 when my friend Matt and I planned a road trip specifically to go to a ballpark we’d never visited before. After weighing our destination options, we chose PNC Park in Pittsburg, which is known as one of the best ballparks in all of baseball. A quick scan of the Pittsburgh Pirates schedule revealed the perfect opportunity - a stretch in June when the Pirates were hosting my favorite team, the Boston Red Sox.

Matt played the role of photographer on this trip - all photos in this post are courtesy of him. Thanks, Matt!

Pittsburgh is a fairly hefty seven hour drive from Chicago, but luckily our friends Adam and Dan were willing to join us, split the driving, and add to the fun. With vacation days at a premium, we had to cram the entire trip into one weekend. We hit the road as early as we could on Friday, and after an enjoyable but uneventful drive, we arrived at the Days Inn in Pittsburgh at about 2:00 AM.


Even through road-weary eyes, we could tell the hotel we chose was total crap. It smelled like stale foot odor, there were cigarette burns on the sheets, the pool looked like it hadn't been cleaned in years, and the building was literally crumbling. I guess that's what you get in Pittsburgh for $40 per night. 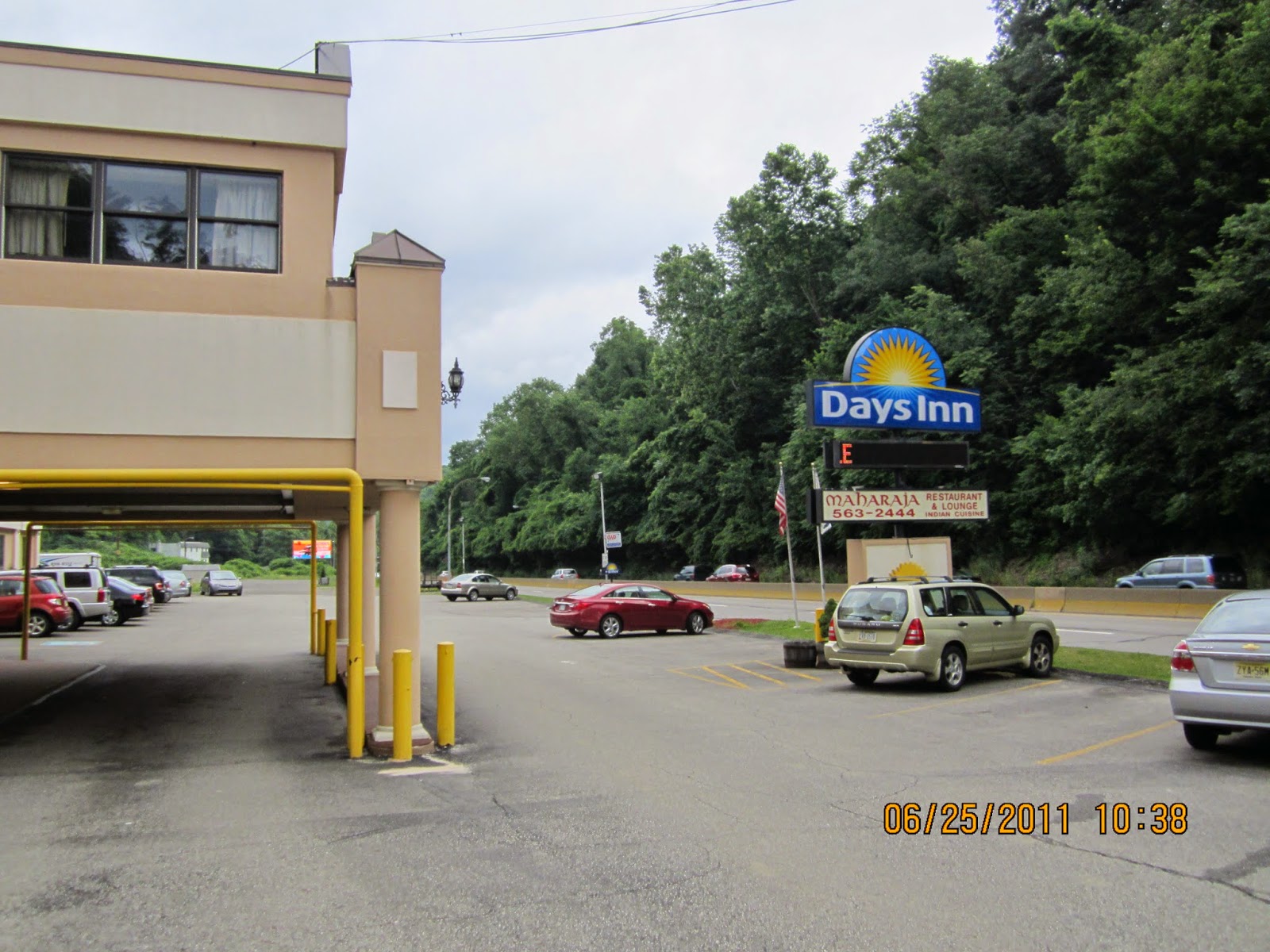 Despite our late arrival the night before, we work up early the next morning to take advantage of our only full day in the city. We started by heading down to the stadium to have a look around. The area around the ballpark was sparsely populated despite both the Pirates and Steelers stadiums being located in the middle of downtown and right next to each other. 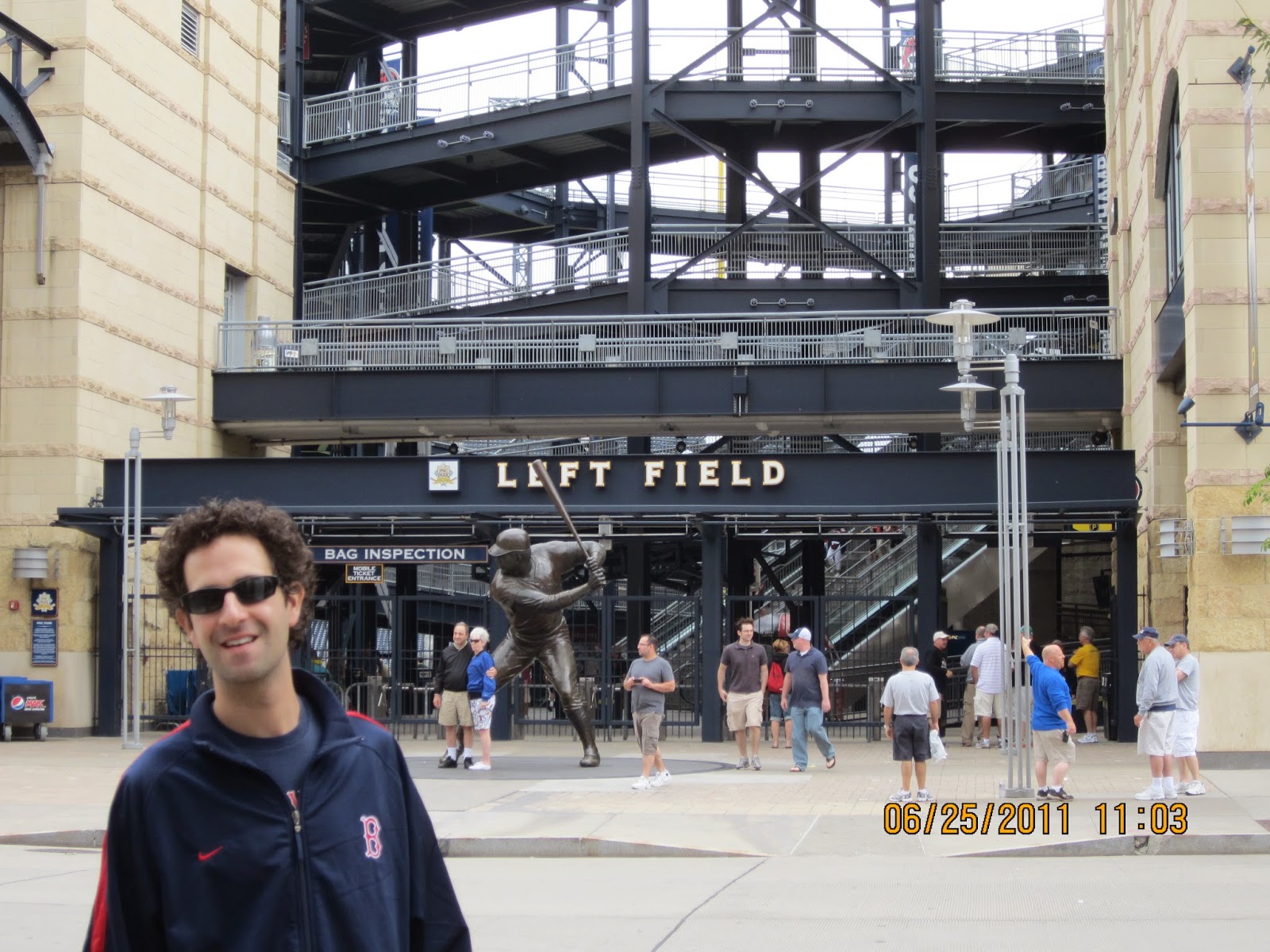 We had an early lunch, and got some advice from the waitress that we should check out the Duquesne Incline. It was a mile and a half from where we were, so walking there gave us a good opportunity to check out the town.

It didn't take long for us to realize that Pittsburgh was a lot different than we had anticipated. I envisioned an old, run down, industrial city, but instead I found many new, shiny, beautiful buildings and a lot of friendly people. As we stopped to take a photo of the skyline, a jogger gave us a genuine "Welcome to Pittsburgh!" as she ran by. You certainly don't find that kind of hospitality in Chicago.

We took our time getting to the incline and ran into some quirk along the way, including a huge, in-progress sand sculpture in a tent on the waterfront. 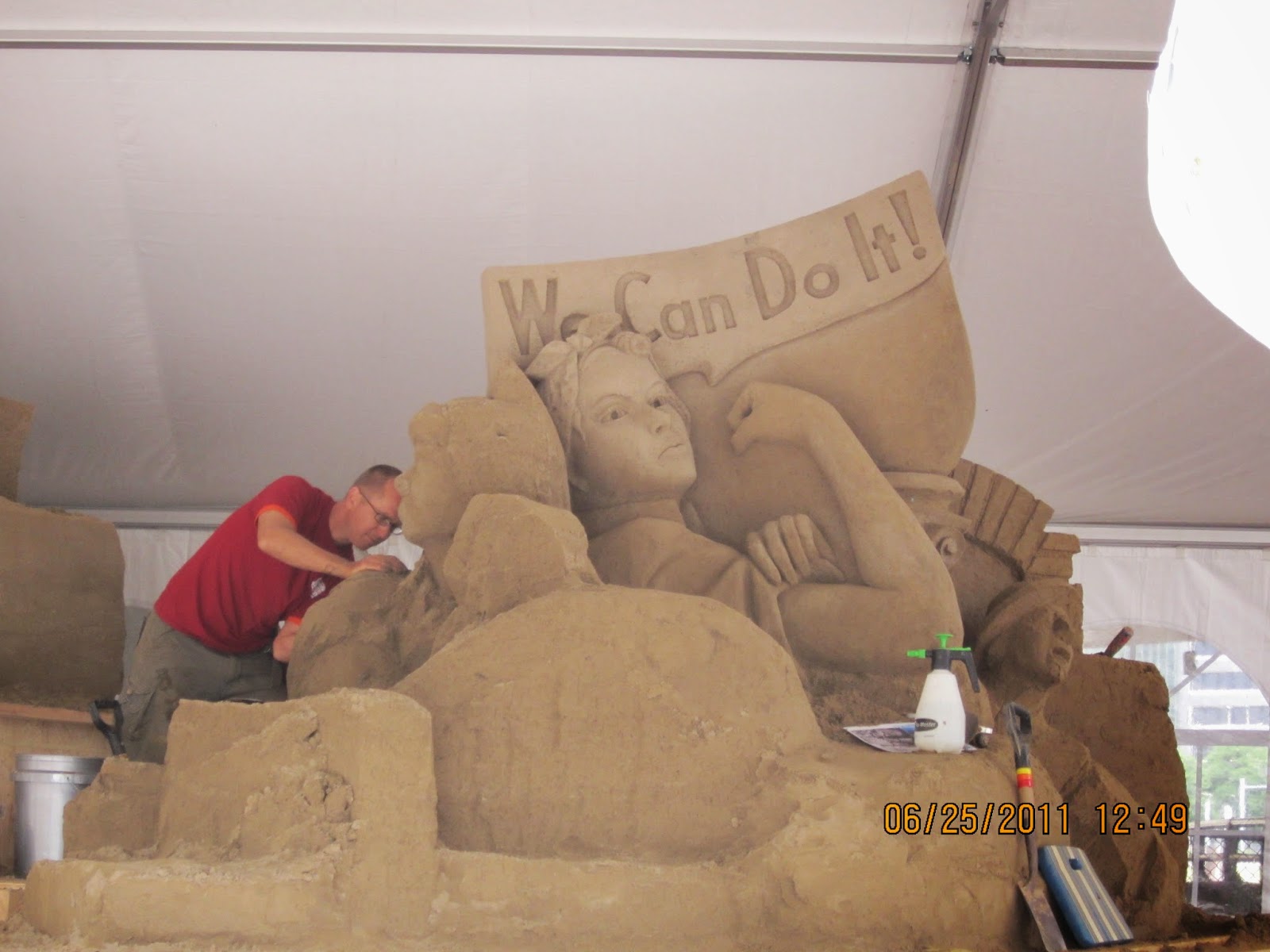 Eventually we made it to the Duquesne Incline, an unusual mode of transportation that looks like the bastard child of a trolley and an escalator. Originally it was created to haul cargo up Mount Washington, but it was later repurposed as a form of public transportation. There was a long line to get on, but we were entertained by the view of the exposed inner workings of the incline while we waited. 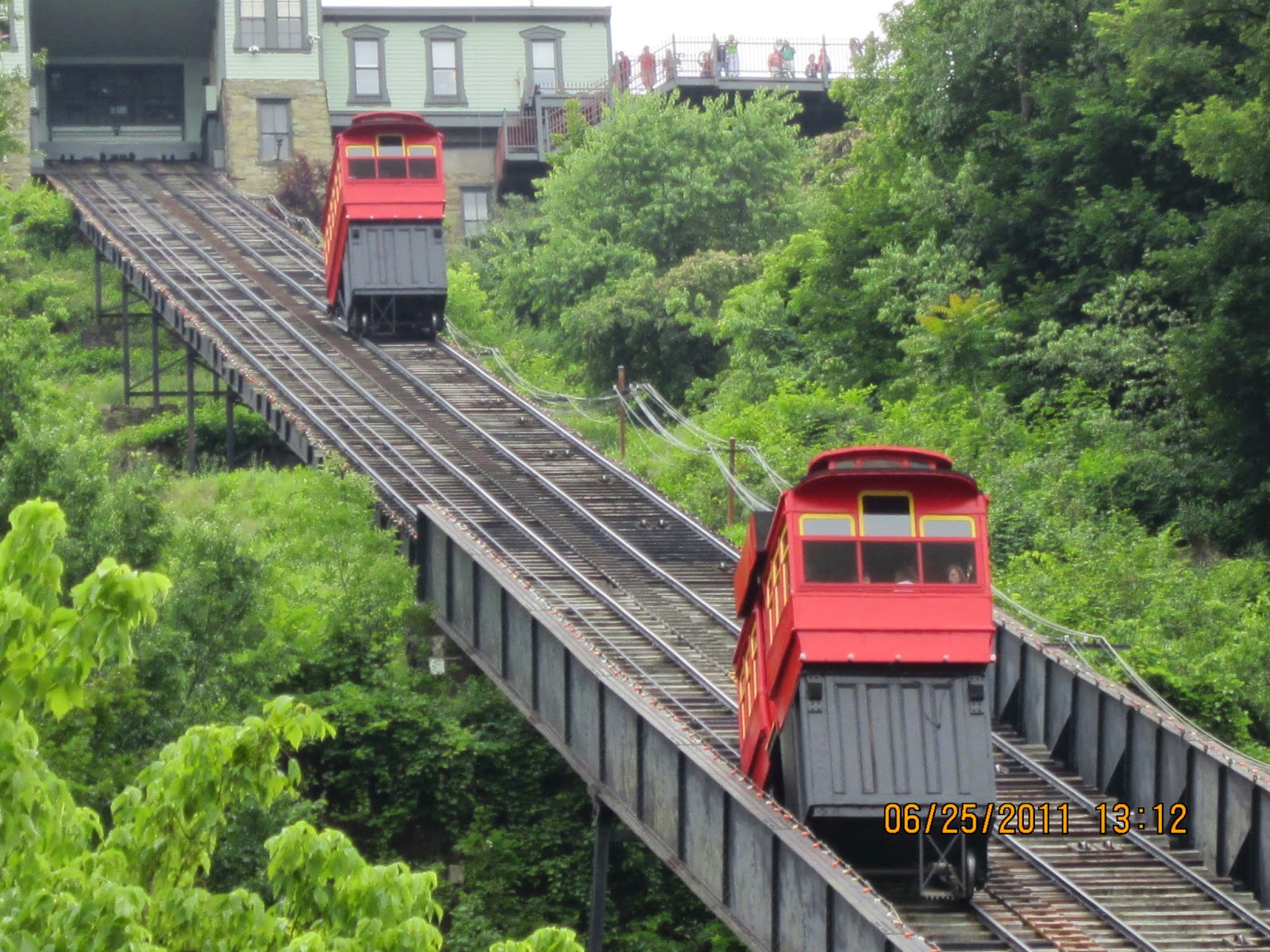 After about a half an hour wait, we got on to one of the trolley cars. The ride was simple but charming, and we thoroughly enjoyed ourselves on the way to the top.


Upon exiting the cable car, we found ourselves at the observation deck, which offered some amazing views of the entire city. Additionally, many news clippings and artifacts displayed the history of the incline and of Pittsburgh. 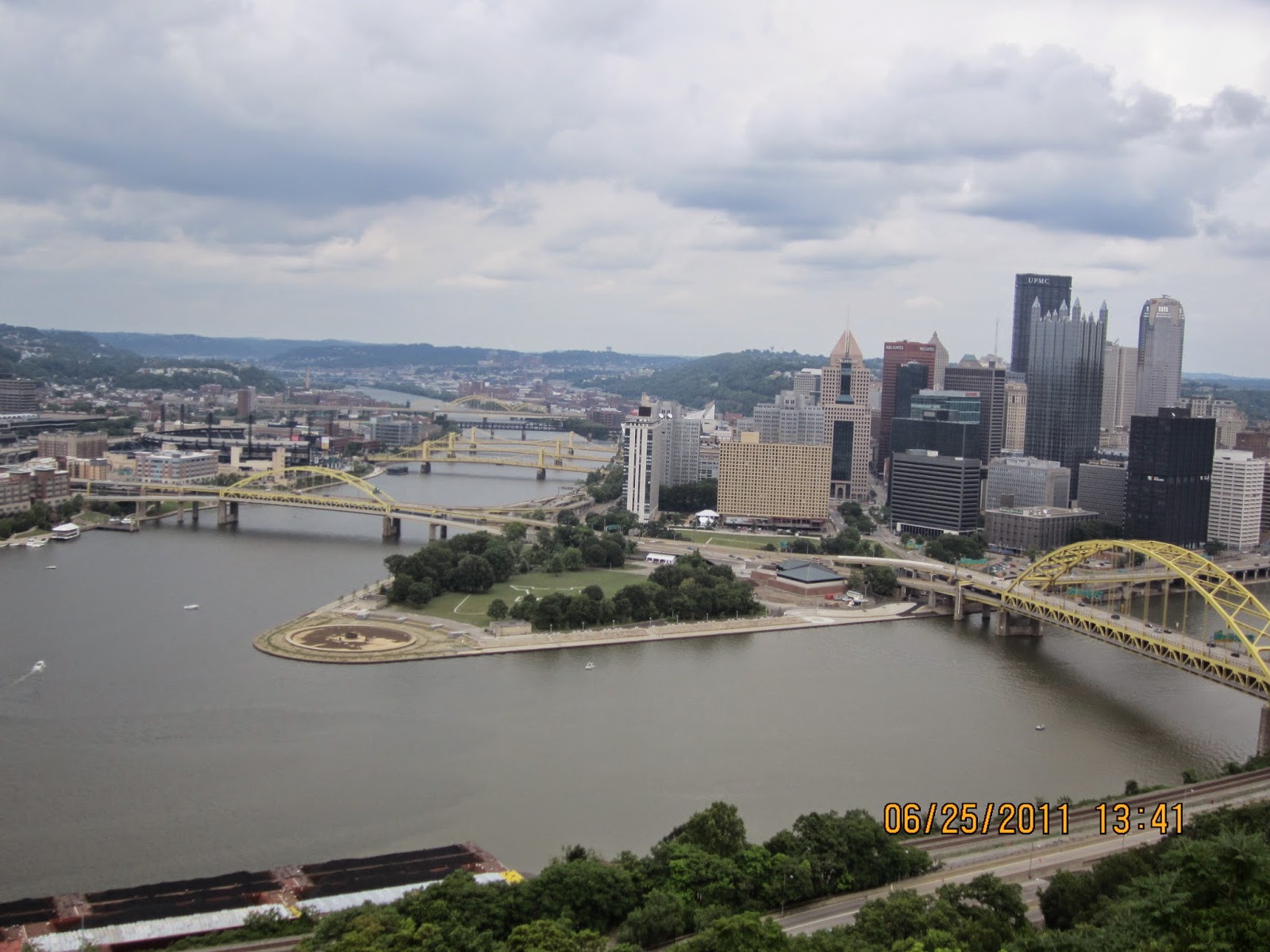 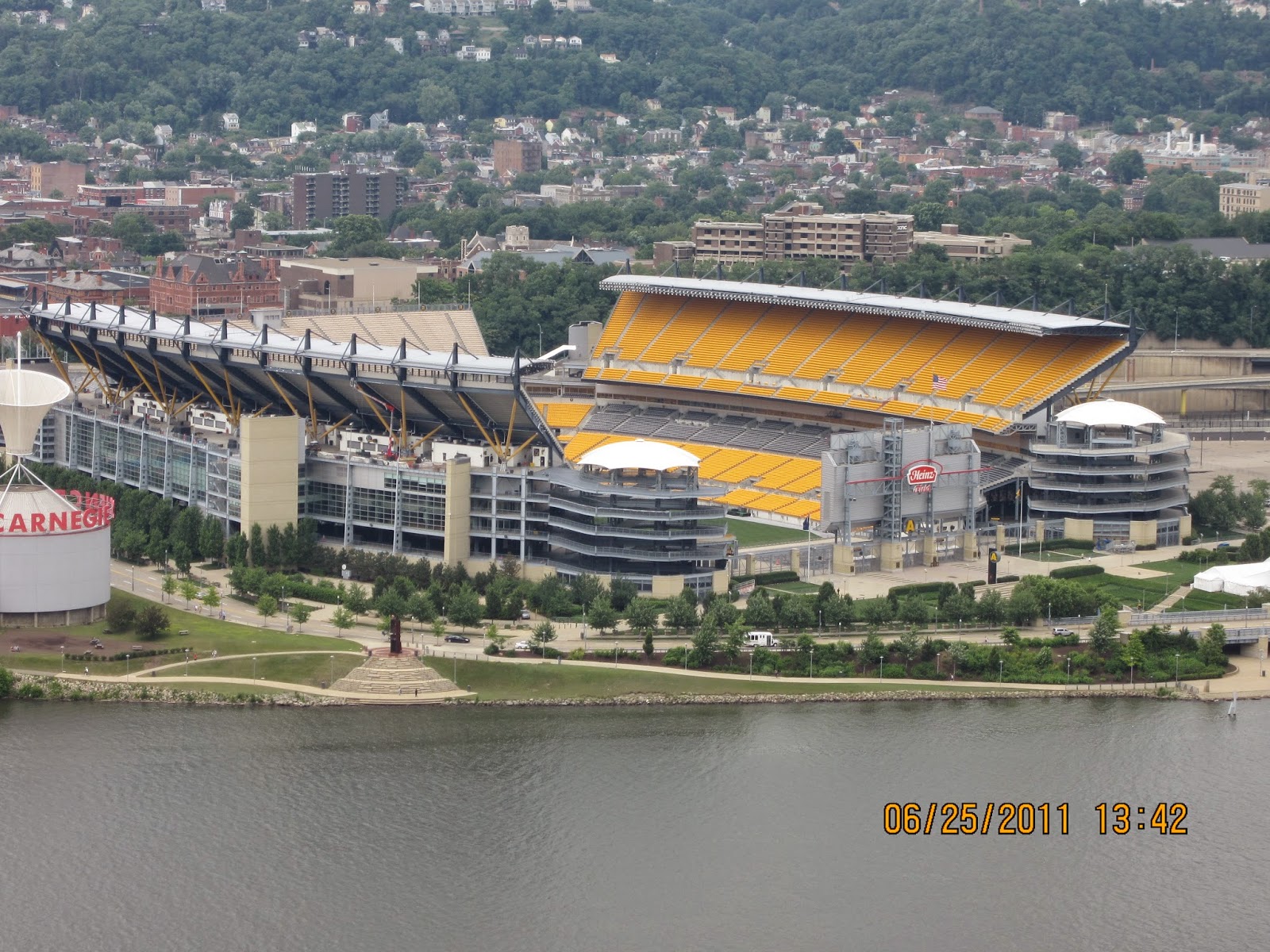 We had a round-trip ticket, which granted return access within three hours of the initial ride, so we took advantage of this by grabbing a drink at the nearby Grandview Saloon. Despite the casual name, this place was actually rather fancy and pretentious. It took a good fifteen minutes to get the attention of the bartender, and when we were finally noticed, we were "greeted” with a snooty, entitled attitude that was thankfully unmatched anywhere else in the city. We gulped down our drinks in less time than it took to order them, under-tipped for the lousy service, and hightailed it out of there. Needless to say, I don't recommend this place.

We were able to hop on a return car pretty quickly and enjoyed a leisurely descent back down the mountain. 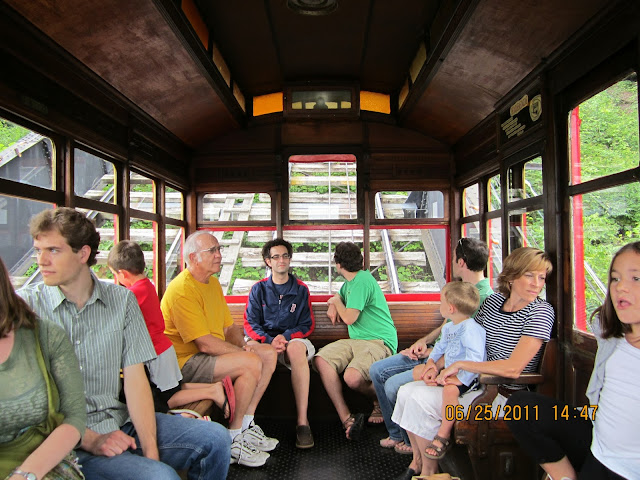 From there we took an alternate route back to the stadium, goofing around along the way. 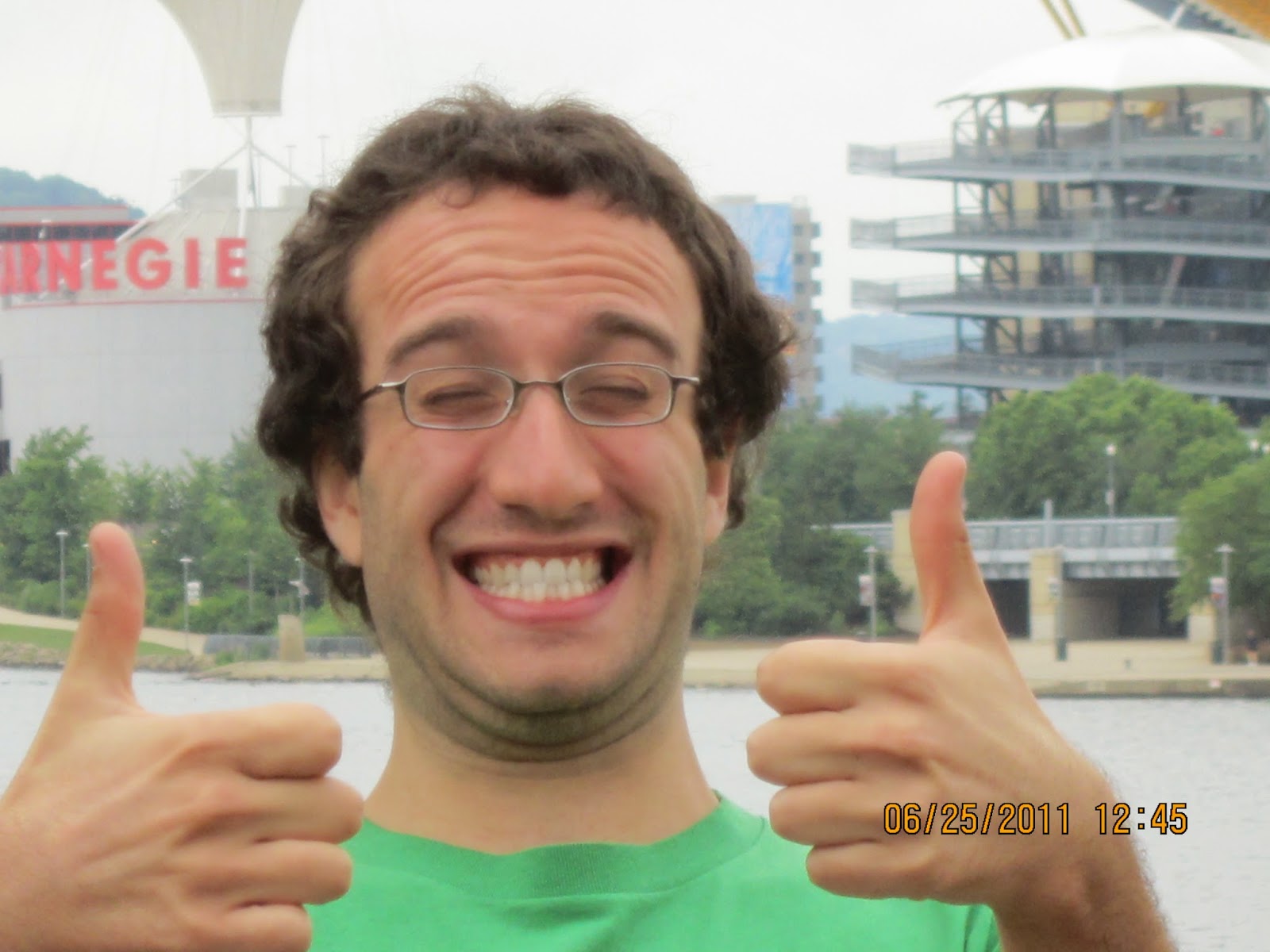 We arrived back in the vicinity of the ballpark with time to spare, so we wandered over to Market Square, a really cool area with a variety of restaurants that had recently been renovated and closed off to traffic. We grabbed an outdoor table at NOLA on the Square, a New Orleans-themed bar and restaurant, and enjoyed some delicious food and a few beers. While we sat there, we chatted with our accommodating waitress and some of the patrons. The table next to us was occupied by a friendly older couple who had been Pirates fans their whole lives. If you're a baseball fan, you know why this is so remarkable. The Pirates have been historically horrible, often occupying last place in their division. That's part of what makes their fans so special. They're small in number, but very dedicated. The couple we talked to could thoroughly recite stretches of Pirates history from memory, and they were plenty forthcoming with their optimism for the team.


Finally it was game time. We tipped generously (we’re only cheap when warranted) and then headed to the Roberto Clemente bridge, one of many yellow bridges that cross the Allegheny River. There are several of these bridges, and they're all painted the same yellow color. It's no coincidence that yellow is the main hue in the color scheme of all of Pittsburgh's major sports teams. 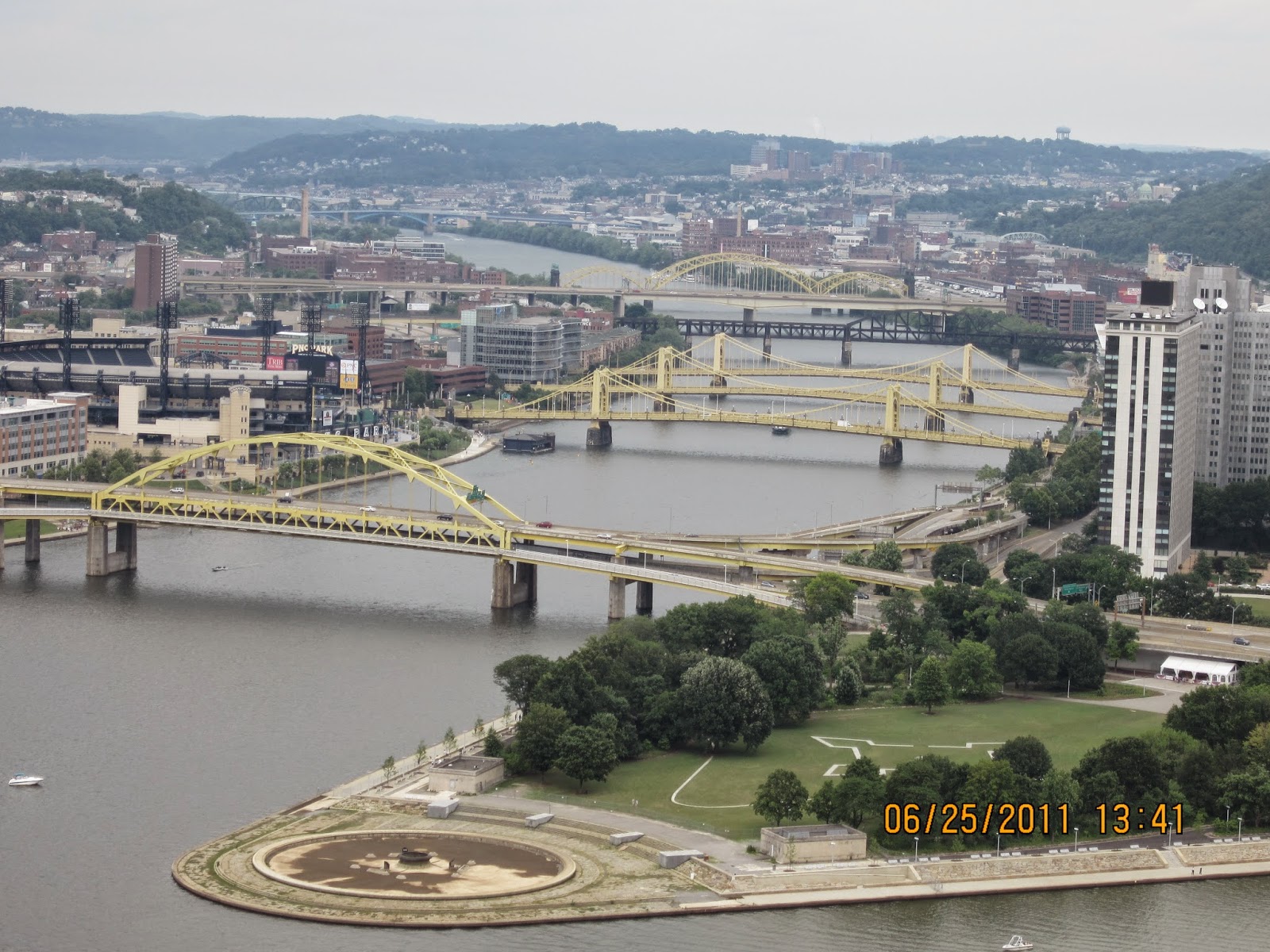 Only pedestrian traffic is allowed on the Roberto Clemente bridge before games, and the energy of the crowd crossing the bridge to get to the ballpark was palpable and contagious. 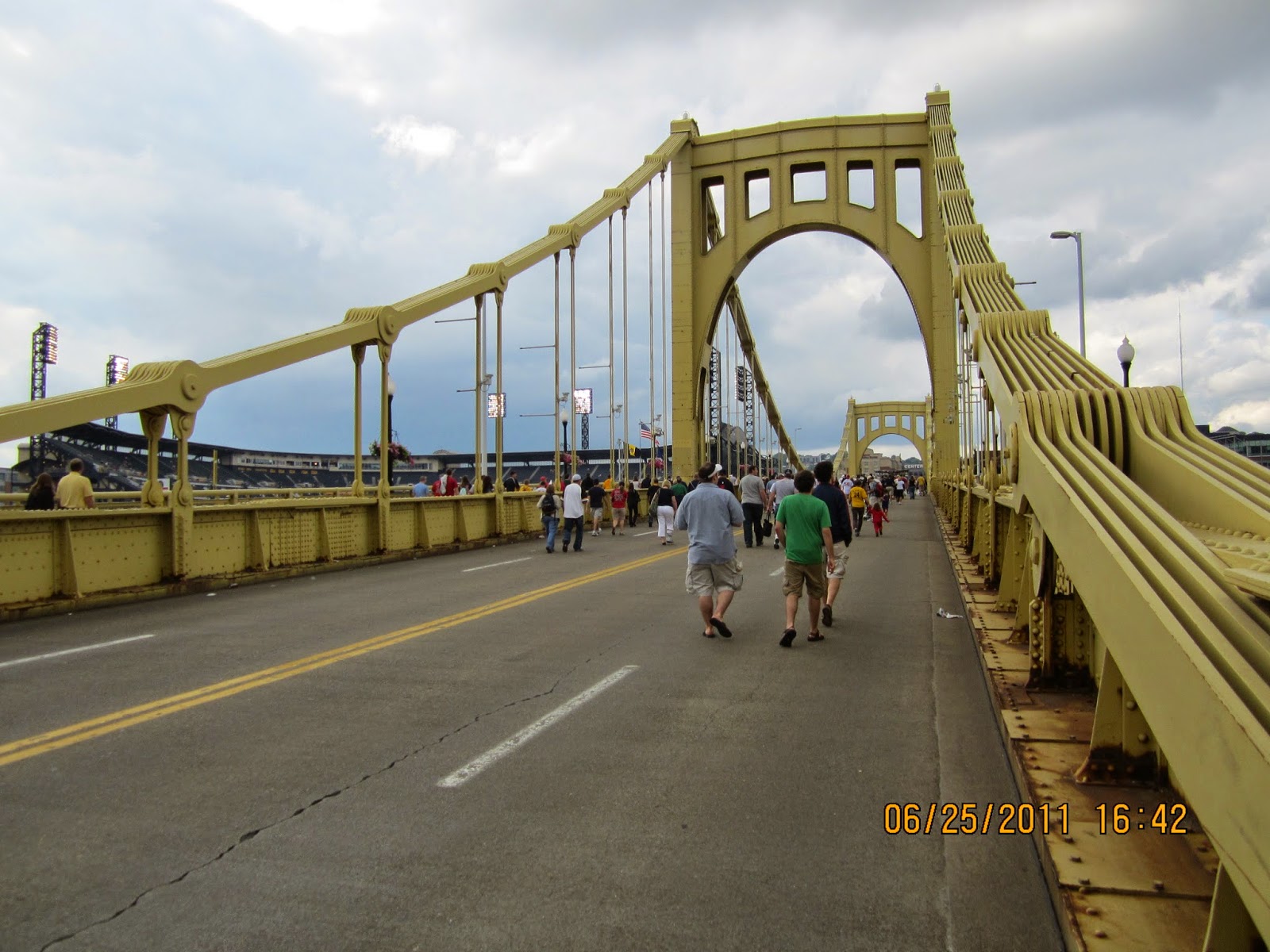 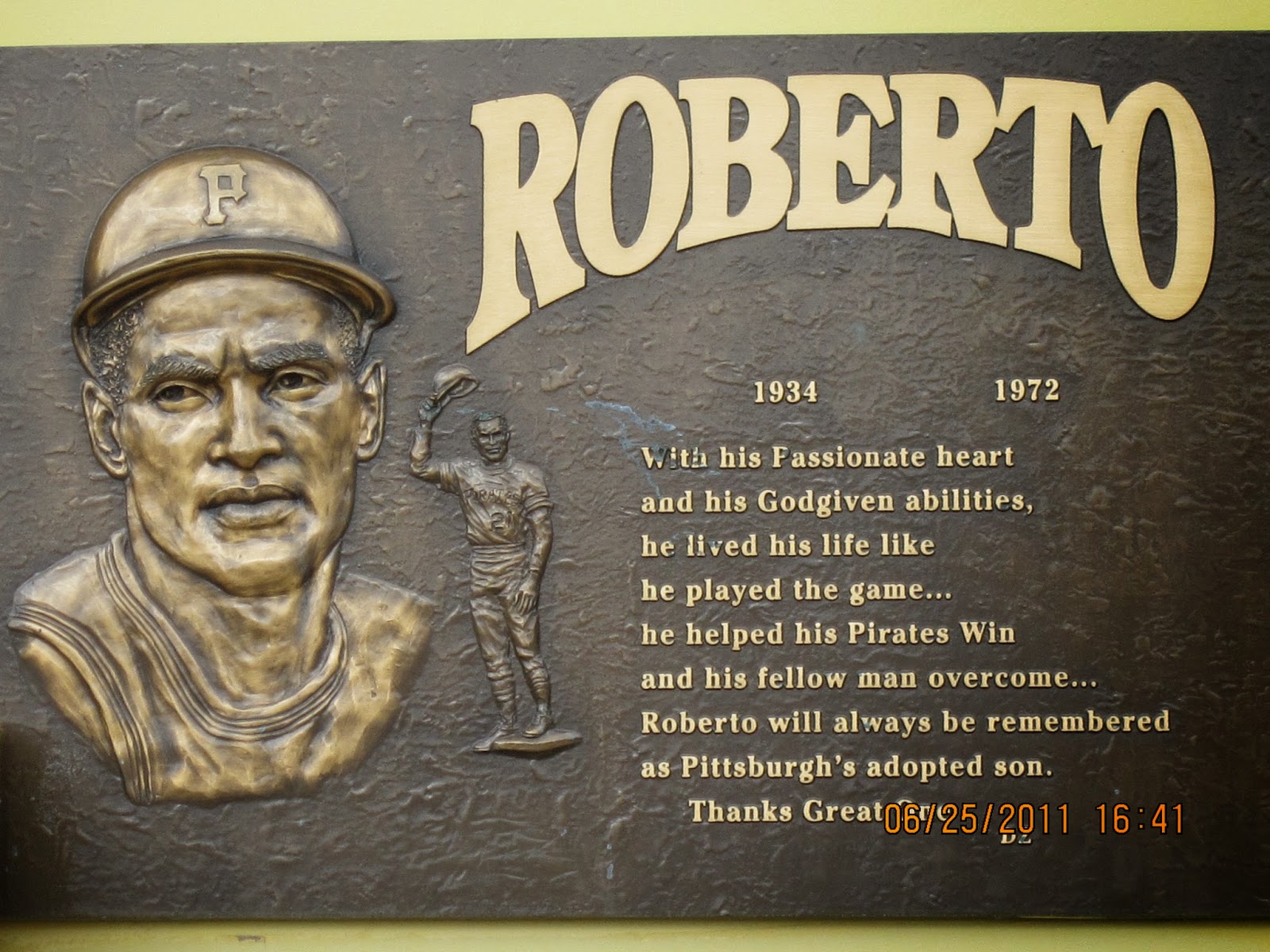 When we entered the stadium, the first thing we noticed was the beautiful cityscape that's visible beyond the outfield wall. The Roberto Clemente bridge and the rest of downtown were directly in view, and with them being so close to the stadium, it felt like the skyline was an extension of the ballpark itself. I truly believe that the color coordination and visual prominence of the yellow bridges is a huge part of the city's identity, and it leads to a sense of unity among the city, the sports teams and the citizens. 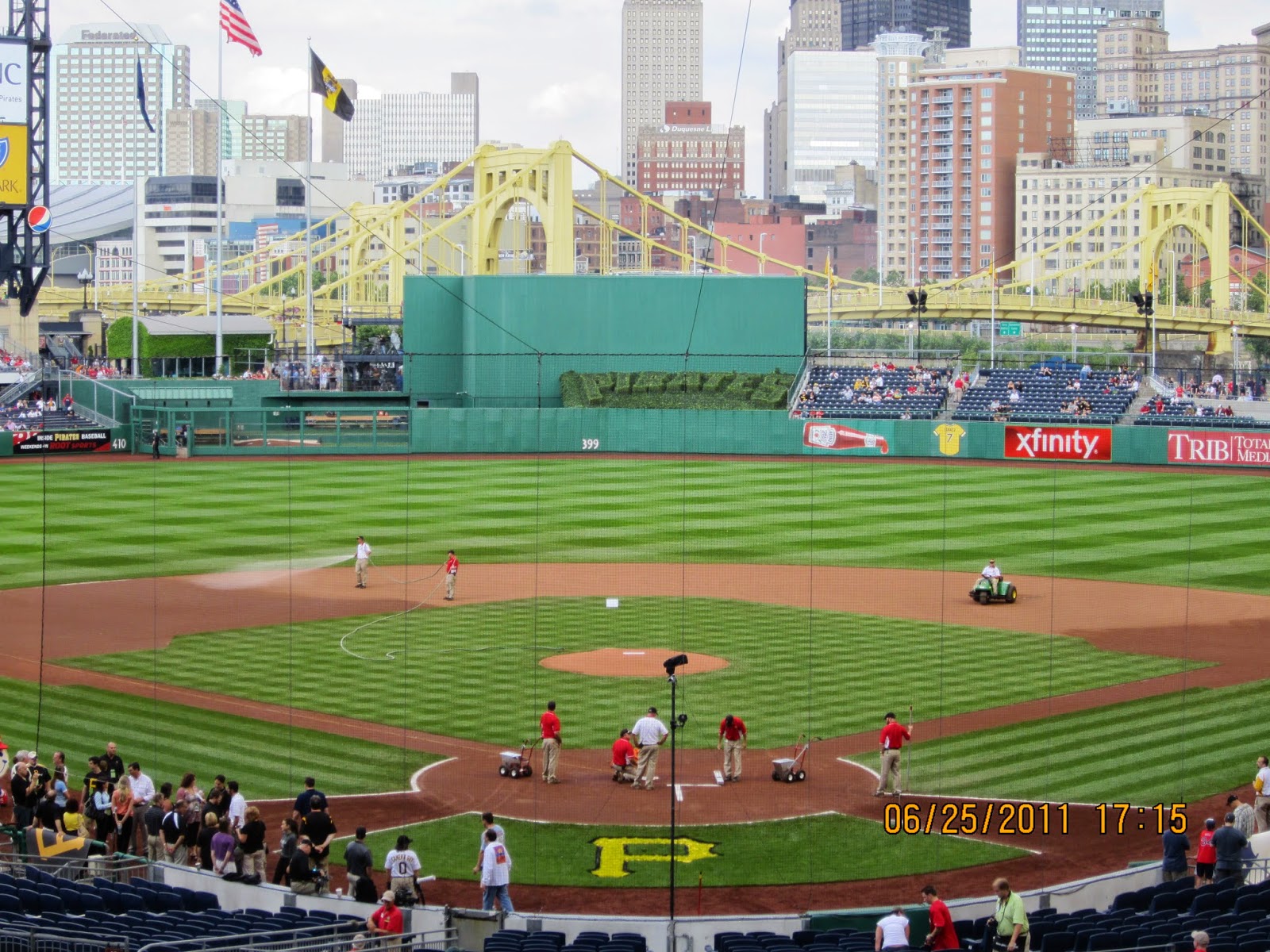 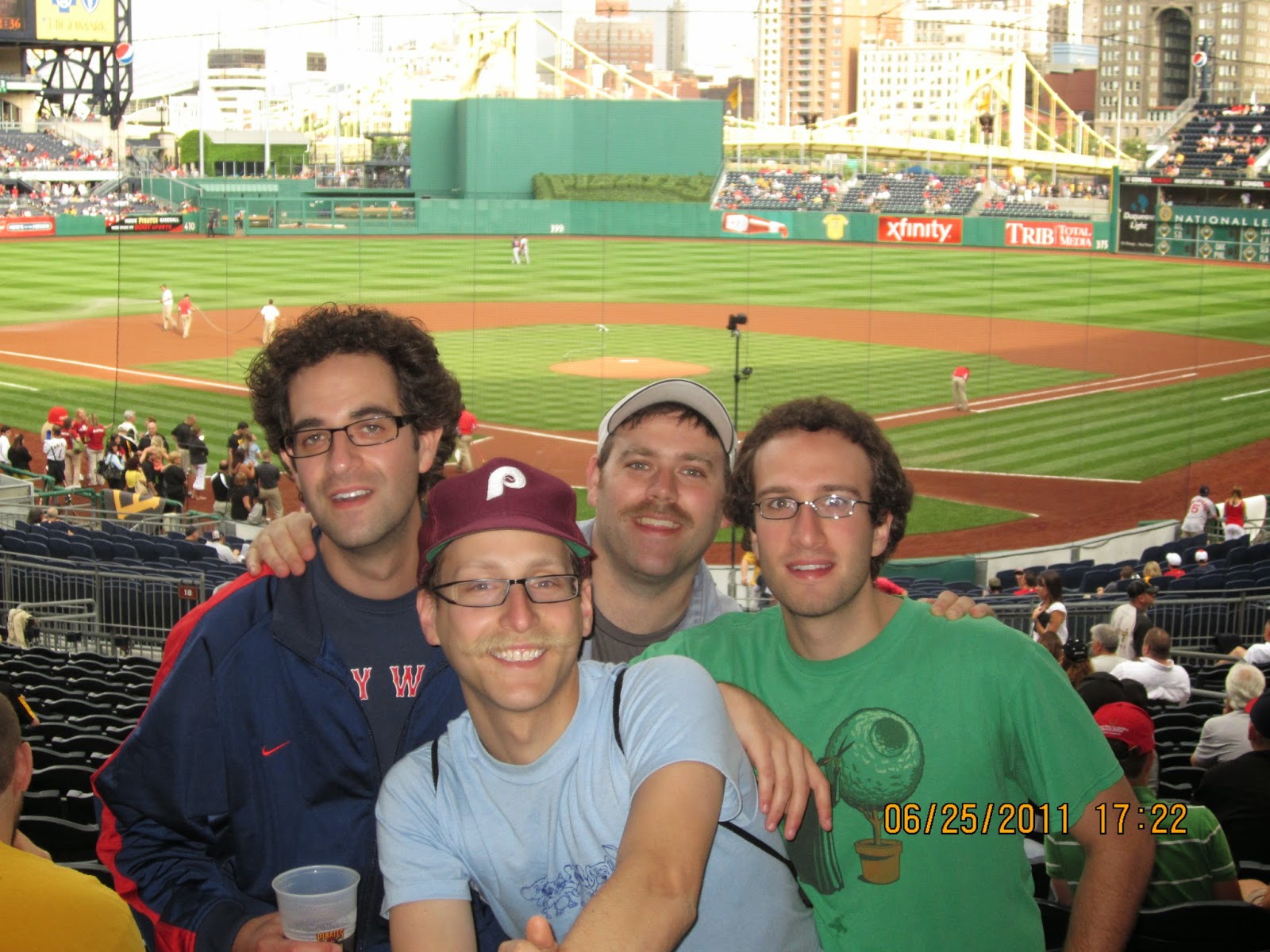 We loved PNC Park. It was super easy to navigate, as the walkways were wide and they afford access to the entire park. This was quite convenient as we had standing room seats and ended up moving around to different sections of the stadium throughout the game. It was a fairly new ballpark, but it featured old school charm. There were plenty of food options (though we were too full from our meal at NOLA to try them) and there were lots of beer stands. It was a fairly small stadium that featured just two levels, which, combined with the close-up view of the city, lead to an intimate, comfortable feel. 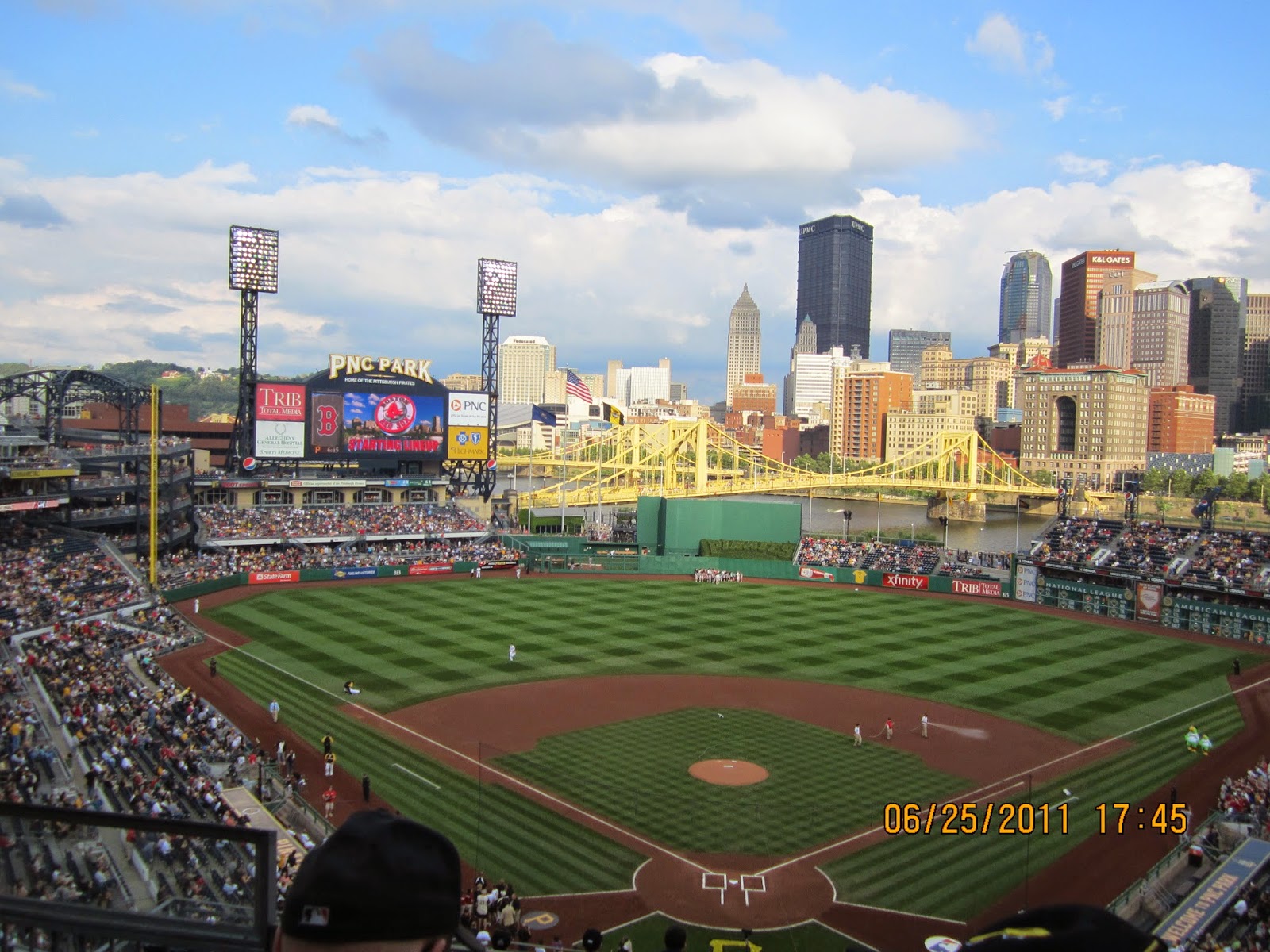 The only thing I didn't enjoy about our visit was the 6-4 beating the underdog Pirates handed the Red Sox. That having been said, I loved the vibe of the energized and empowered Pirates fans as they watched their developing team beat up on one of the baseball’s best clubs. It was clear that the Pirates were on their way to becoming a major force in the National League. The fans' enthusiasm for this evolution could hardly be contained. 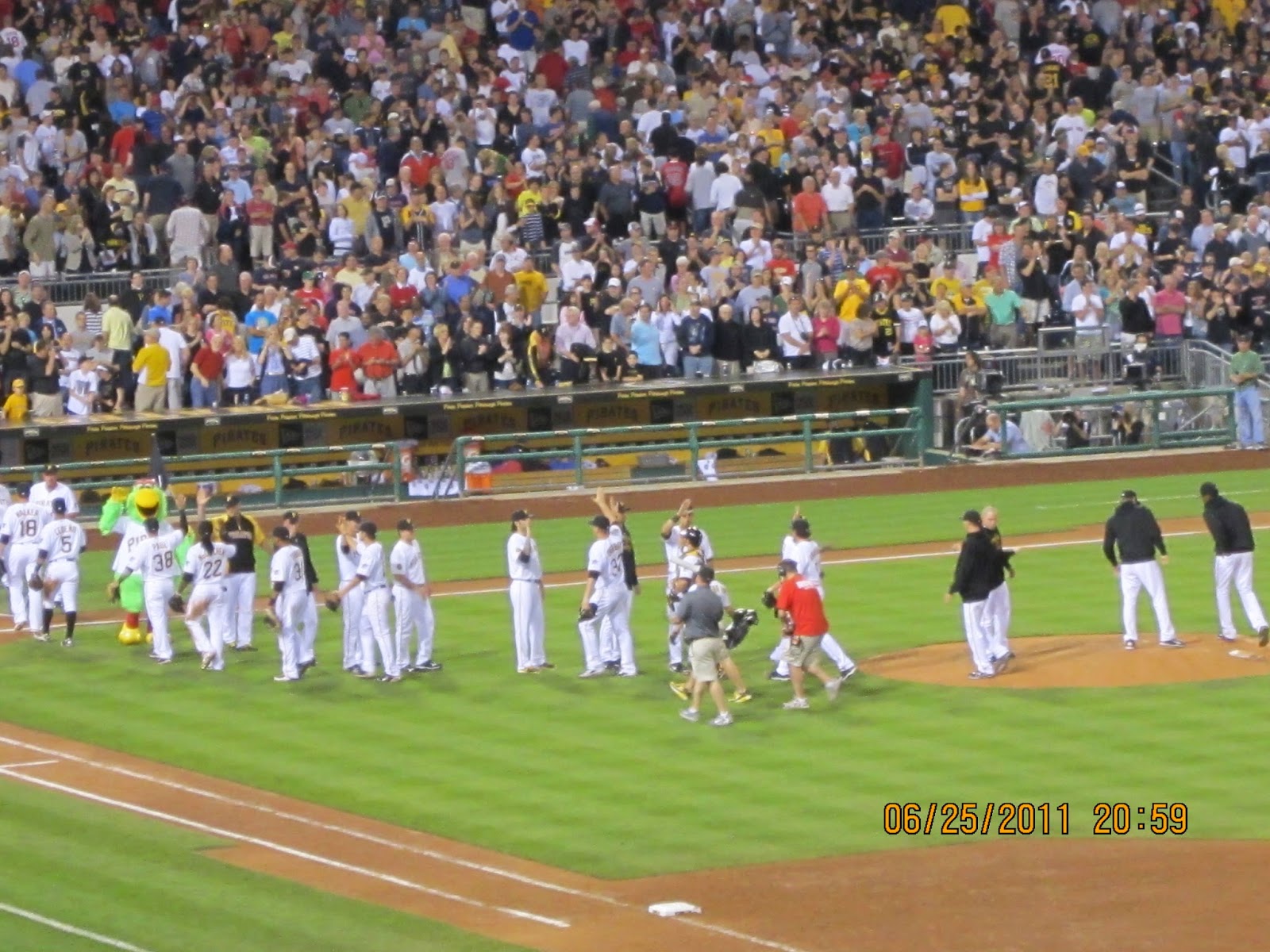 What's more, we were treated to a great post-game fireworks show. 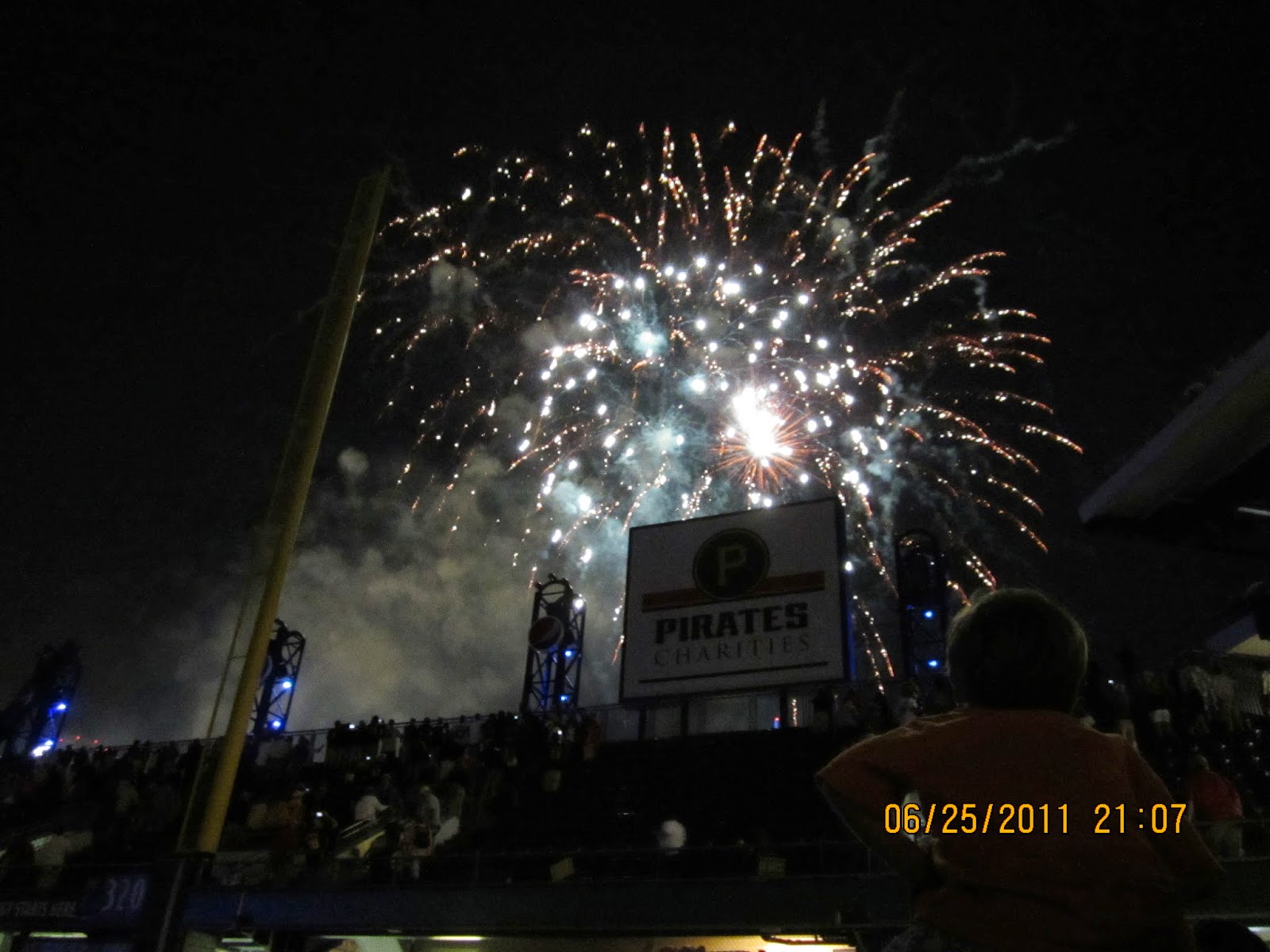 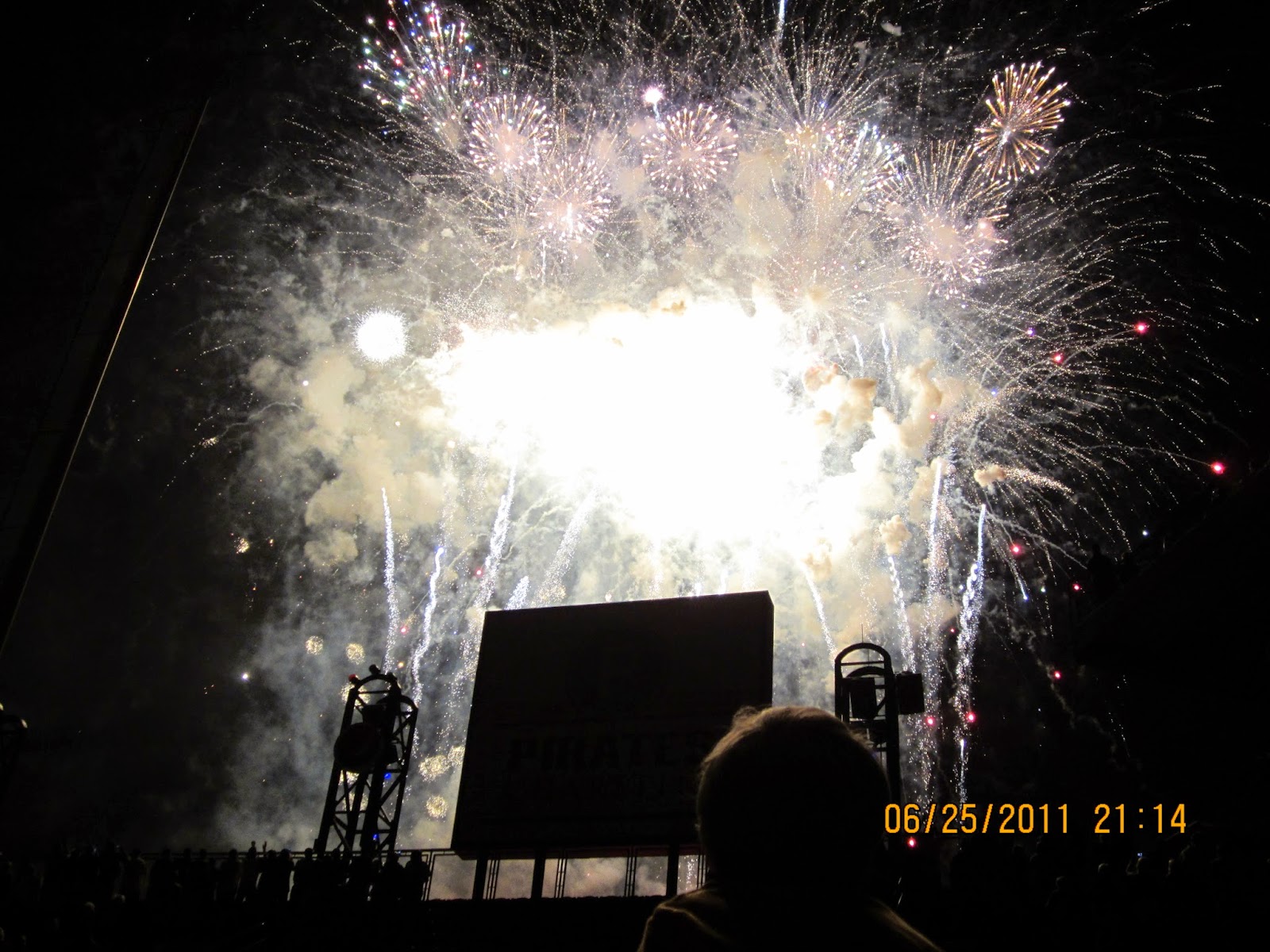 We were pretty tired after the game, but we weren't ready to say goodbye to Pittsburgh just yet, so we headed back over the bridge to Market Square so we could enjoy a few more beverages and some revelry. 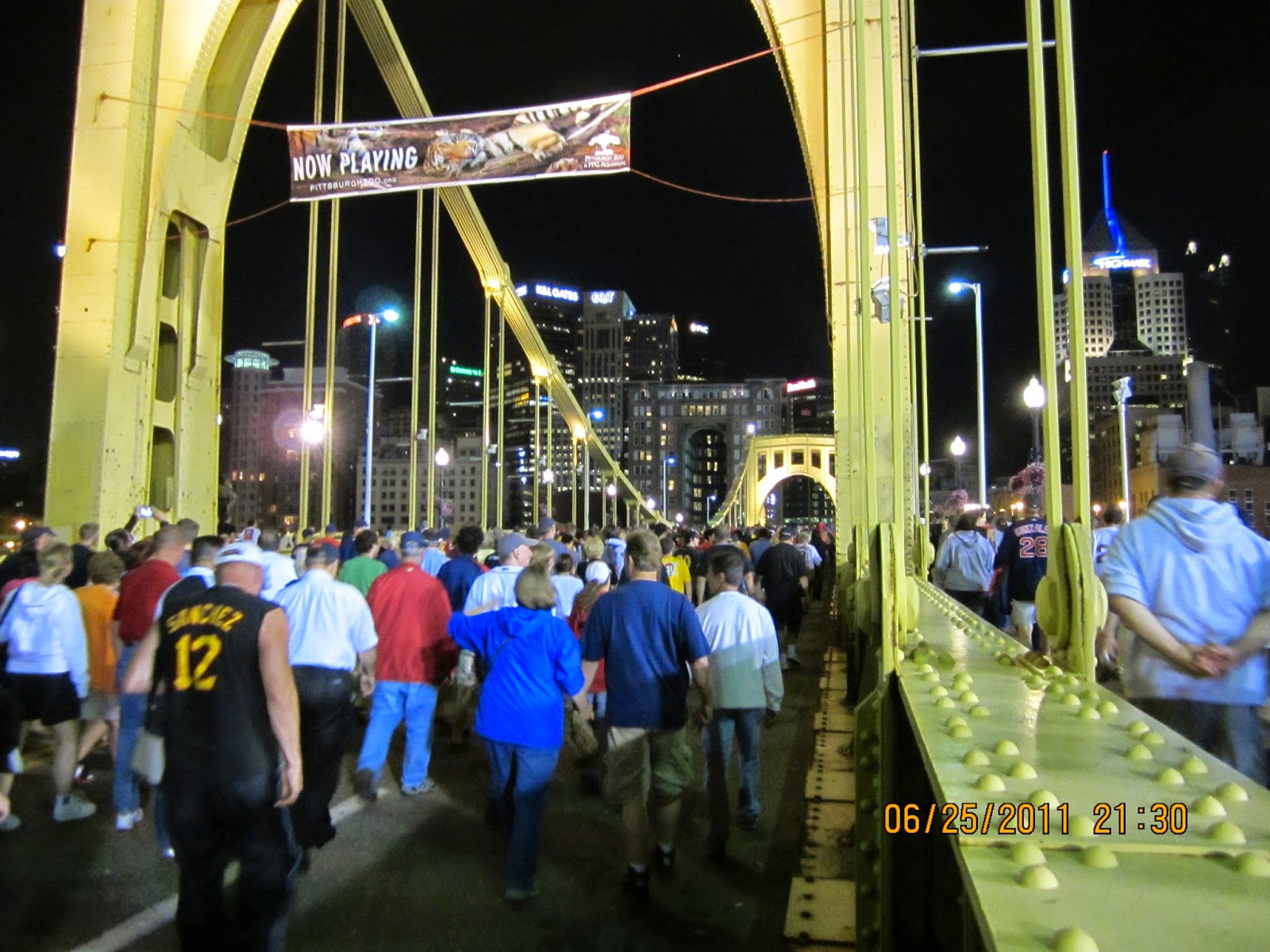 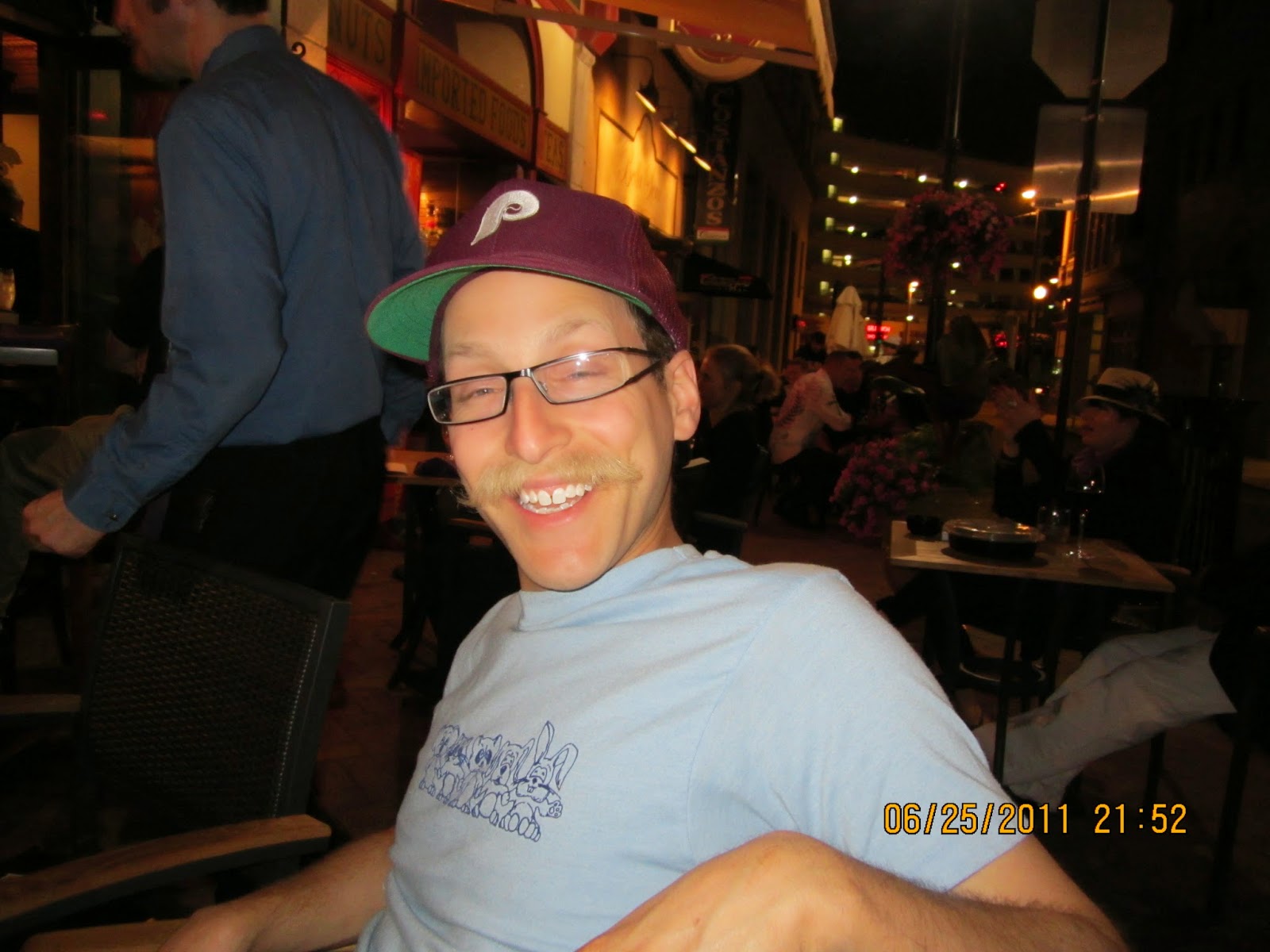 We returned to our scuzzy hotel after a few drinks and decided to play a casual round of cribbage to end the night. This laid back game quickly became heated, and lead to some roughhousing, as evident in this photo. 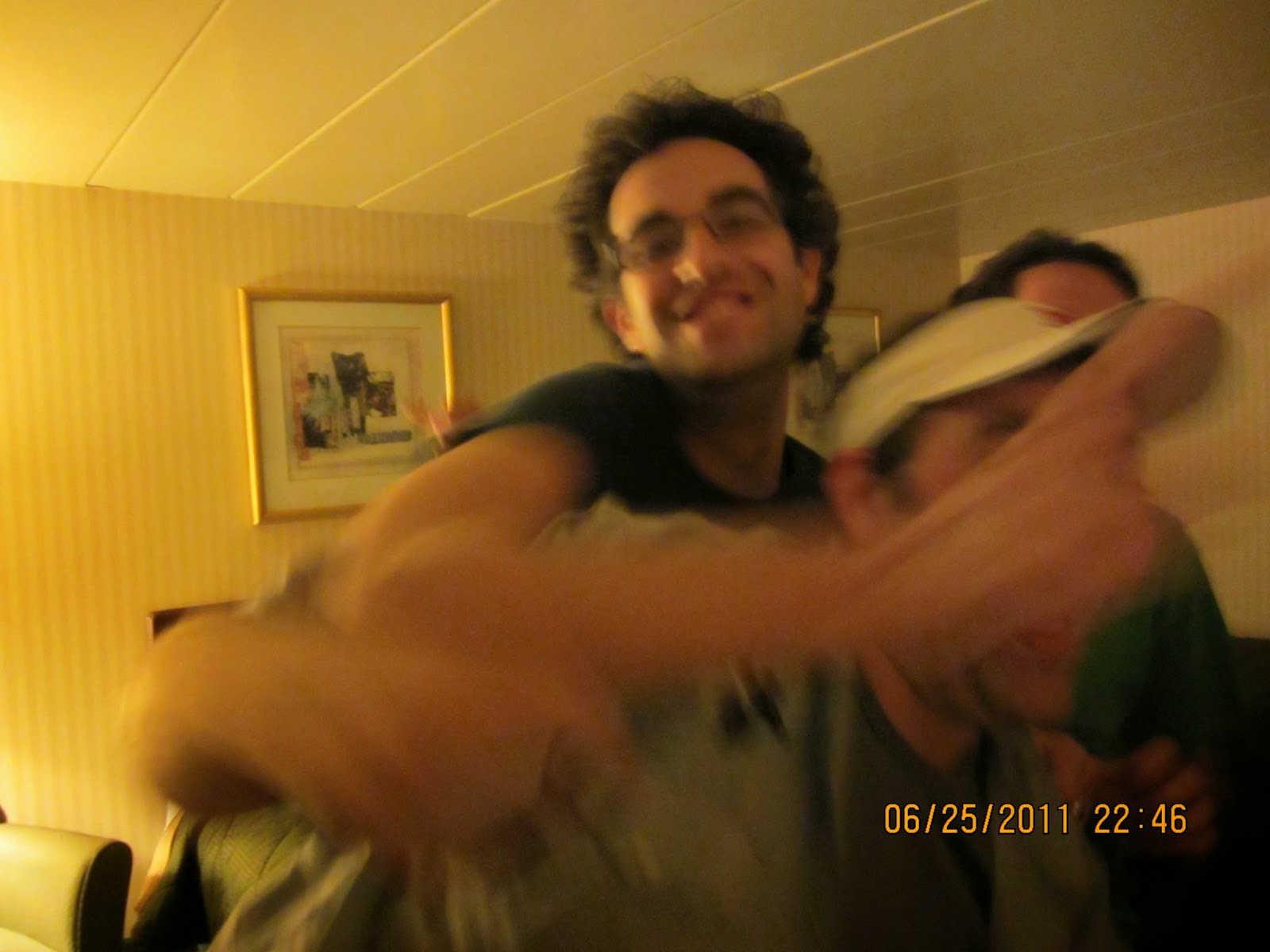 The ride home the next day was smooth and peaceful. We had great weather, and we listened to the final game of the Red Sox vs. Pirates series on the radio. The Red Sox won the game that day, but it wasn't enough to salvage the series, which the Pirates won, two games to one. There was also some back seat cribbage going on, and thankfully that game didn't lead to a brawl. 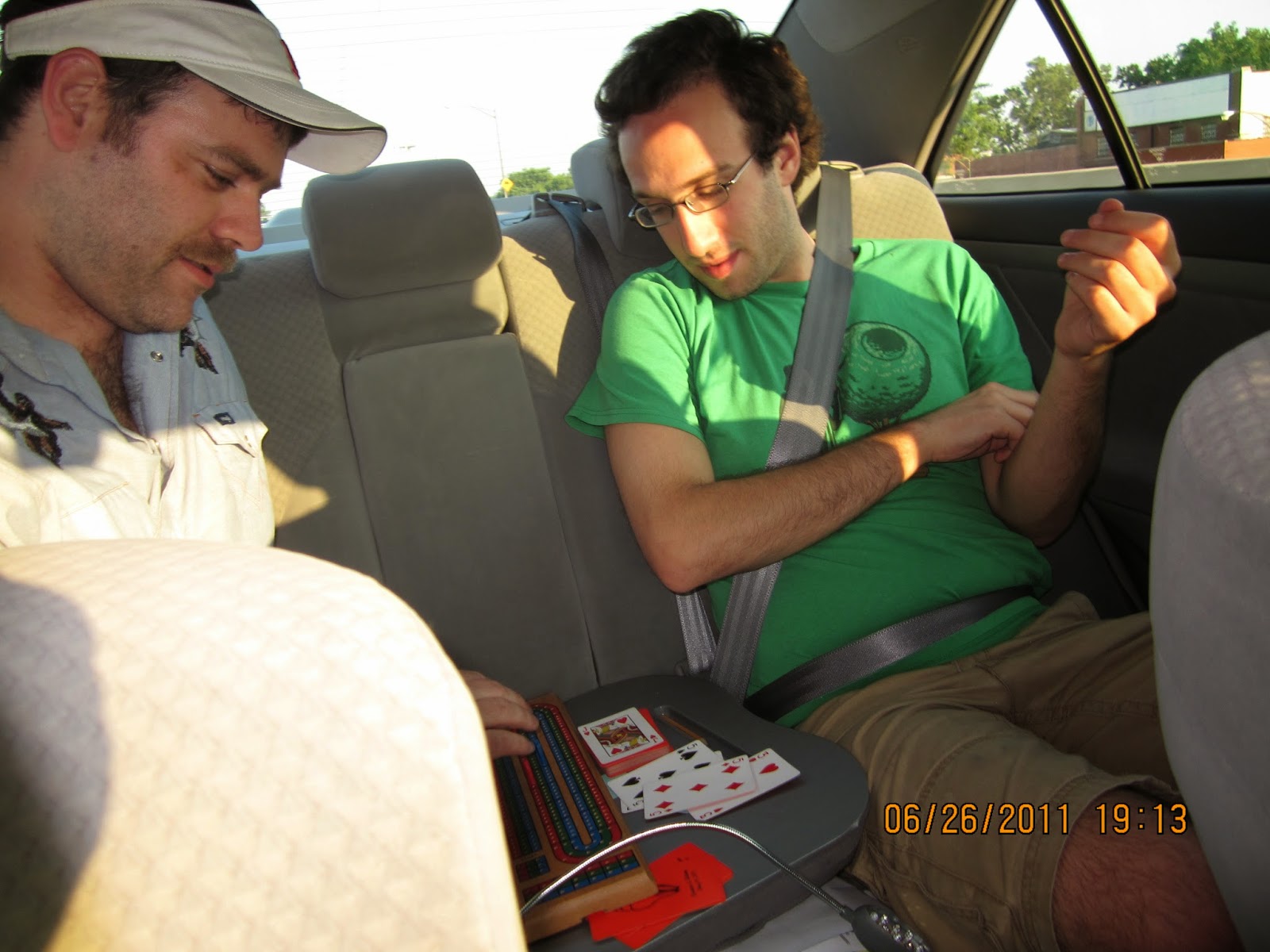 We had so much fun during this trip that ballpark road trips became an annual tradition, inspiring our trips to Progressive Field and Great American Ball Park in 2012 and Kauffman Stadium in 2013.


Must See in Pennsylvania:

Special thanks to Matt Lang for the photos featured in this post! Check out his blog about being a Cubs season ticket holder at www.section403.com, and follow him on Twitter: @mattylang