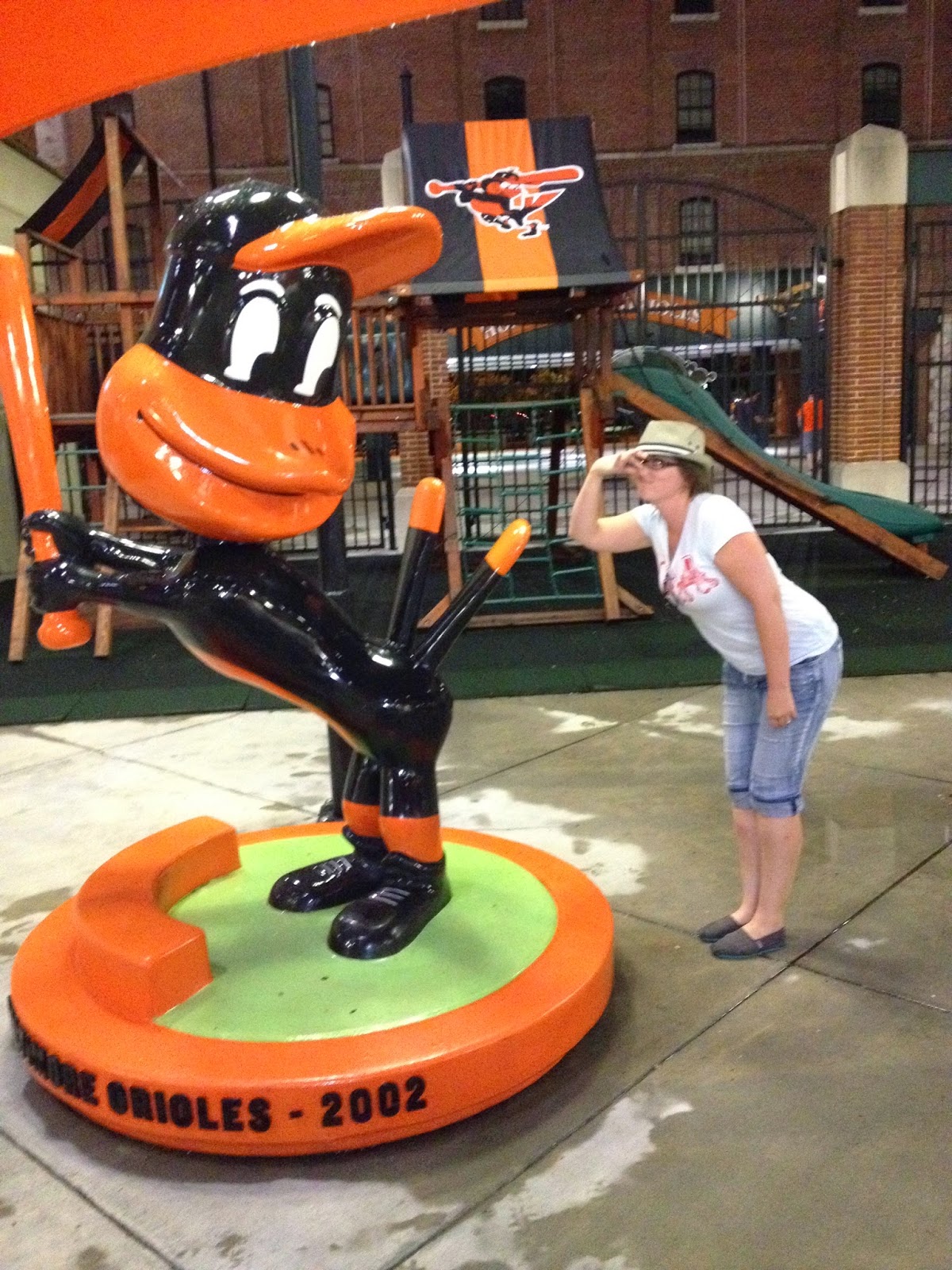 Mrs. Tires and I went on an epic journey in 2012 that took us to visit my Uncle Steve in Washington DC and then on to Virginia and Tennessee. Steve and I have a long-standing bond over stadium chasing, and are racing to get to all thirty major league ballparks, so we couldn't let this visit go by without seeing a game. The Washington Nationals were out of town, but the Orioles were playing at home in Baltimore, a which is a reasonable drive from DC.

Steve, his fiancée Lisa, Mrs. Tires and I piled into my Camry and we hopped on the Baltimore-Washington Parkway. It was a quick and scenic drive that took us about an hour and brought us to within a couple blocks of the stadium.

TRAVEL TIP: If a parkway is an option as a route on your road trip, take it. Parkways are scenic highways by design that are well-maintained and take you directly from one city to another. They're common in the Northeast.

We had originally planned to visit the stadium two days earlier, but changed our schedule because the forecast was much more favorable on this Saturday night. Well, the rain that was predicted two days ago never came, and despite the 70 degree and sunny Saturday forecast, it started to pour as we neared the ballpark. We took cover across the street from the stadium at the Diamond Tavern and waited out the rain. We were early enough to get a table, and it's a good thing we did. The place filled up quickly as game time approached and the rain intensified. Fortunately it didn't dampen our spirits, as the restaurant was rather swanky, and I was excited to be so close to the stadium.

Oriole Park at Camden Yards is one of the most significant ballparks in the history of baseball. It was the first neo-classical stadium, and its opening in 1992 inspired many of the stadiums that have been built since. Neo-classical stadiums are known for preserving the tradition, style and feel of classic, old-world baseball stadiums while also offering the conveniences, amenities and food choices that are expected of a modern entertainment venue. It was also heavily featured in the Super Nintendo game Ken Griffey Jr. Presents Major League Baseball, which I played for approximately six million hours after I got it for a Bar Mitzvah present in 1993. For those two reasons, I had been looking forward to this visit for a long time.

However, the longer we waited, the heavier it rained. We started worrying that the game may not be played. This would be a major bummer, as not only would it ruin the evening, but it would impact the race between me and Steve. Previously set rules state that you must see an official major league baseball game at the stadium for it to count. A rainout meant no official game, and therefore no official visit.

After some appetizers and drinks, the rain let up. There was more rain in the forecast, so we elected to check out the stadium while we could. We entered the stadium on Eutah Street. This street ends right at the ballpark and becomes a walkway open to anyone with a ticket. It's almost as though the street is a part of the stadium.

Statues of Oriole greats greeted us as we entered. The Orioles were in the process of adding a handful of new statues that year, and had in fact unveiled the statue of Eddie Murray that day.

Past the statues, the walkway formerly known as Eutaw Street is lined with food vendors, gift shops and a restaurant. As we continued to walk, we noticed the plaques embedded in the ground. Each one commemorates a home run that cleared the stands and landed on the walkway. That's a HUGE home run. As of right now less than 80 homers have landed there in the ballpark's twenty-year history. 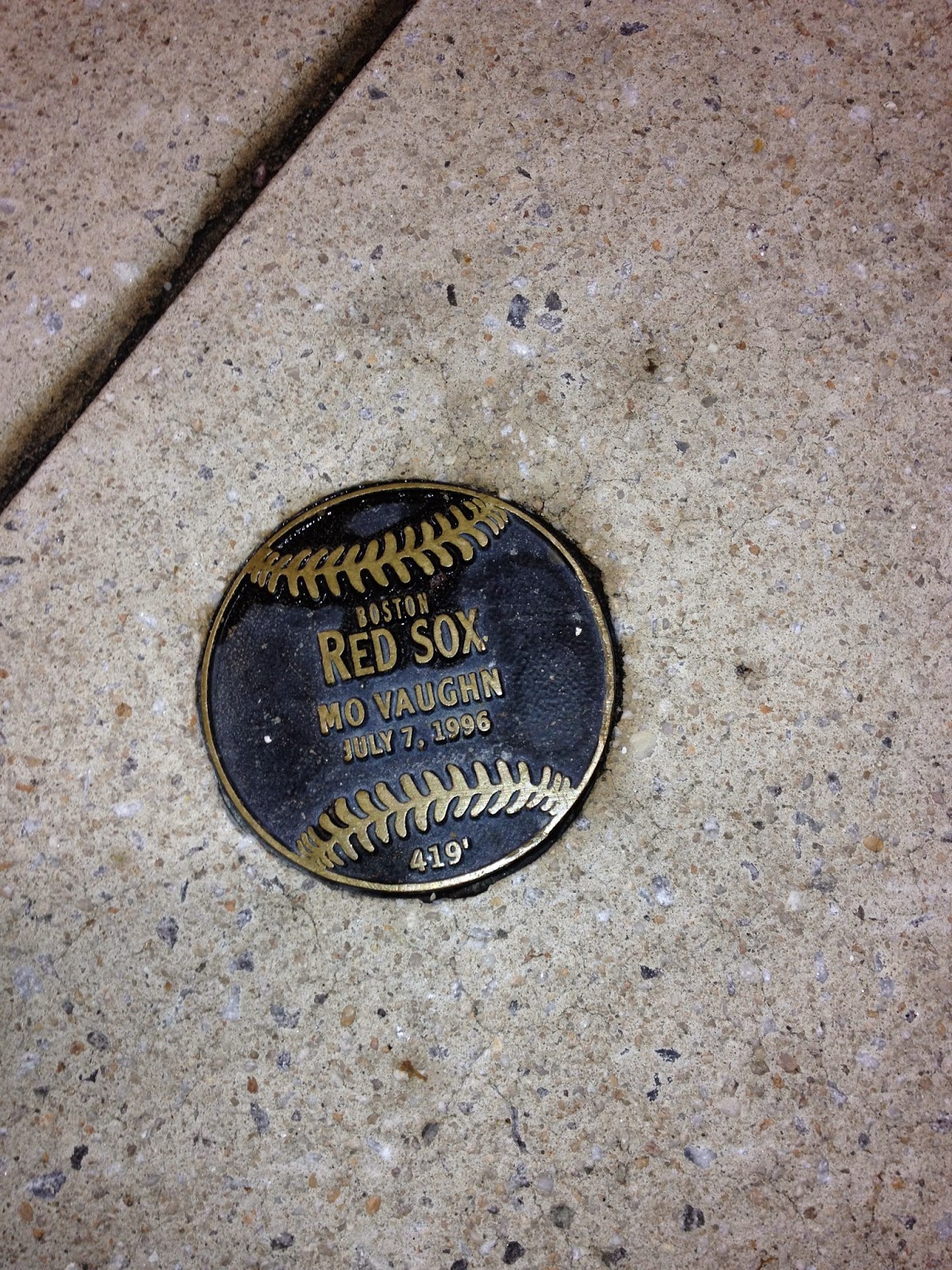 As I was blocking foot traffic so I could take pictures of the ground, the rain made another appearance. We headed to our seats as quickly as possible as the skies opened up for another round. Fortunately, our seats were covered. We sat down and started checking out our bird's eye view of the stadium as it poured and poured. 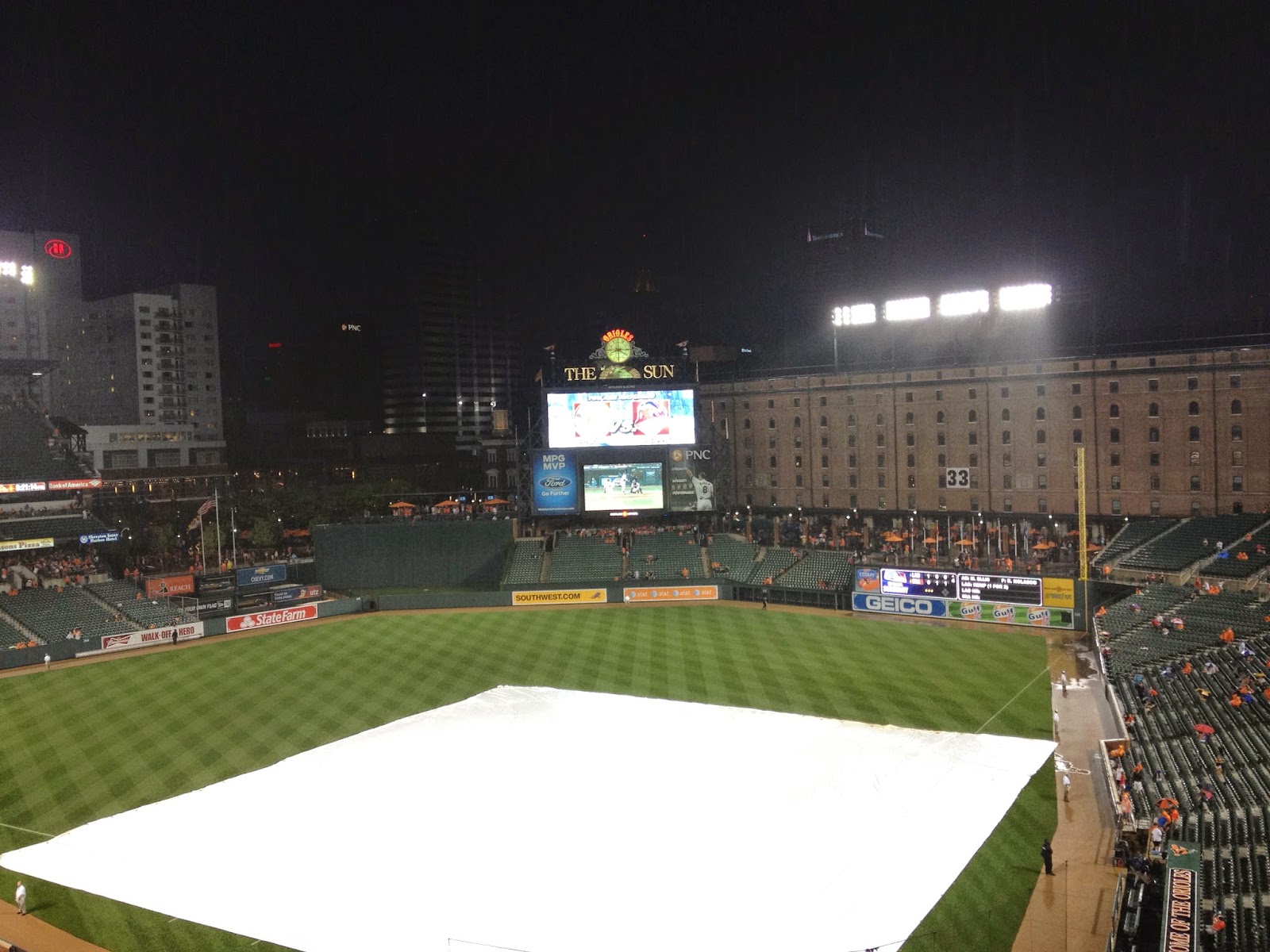 The photos I got that day really don't to the stadium justice. It's stately and yet cozy. Industrial and yet welcoming. The whole color scheme of the stadium is appealing, and the famous warehouse wall that towers over the stadium in right field blends in perfectly with the ballpark. 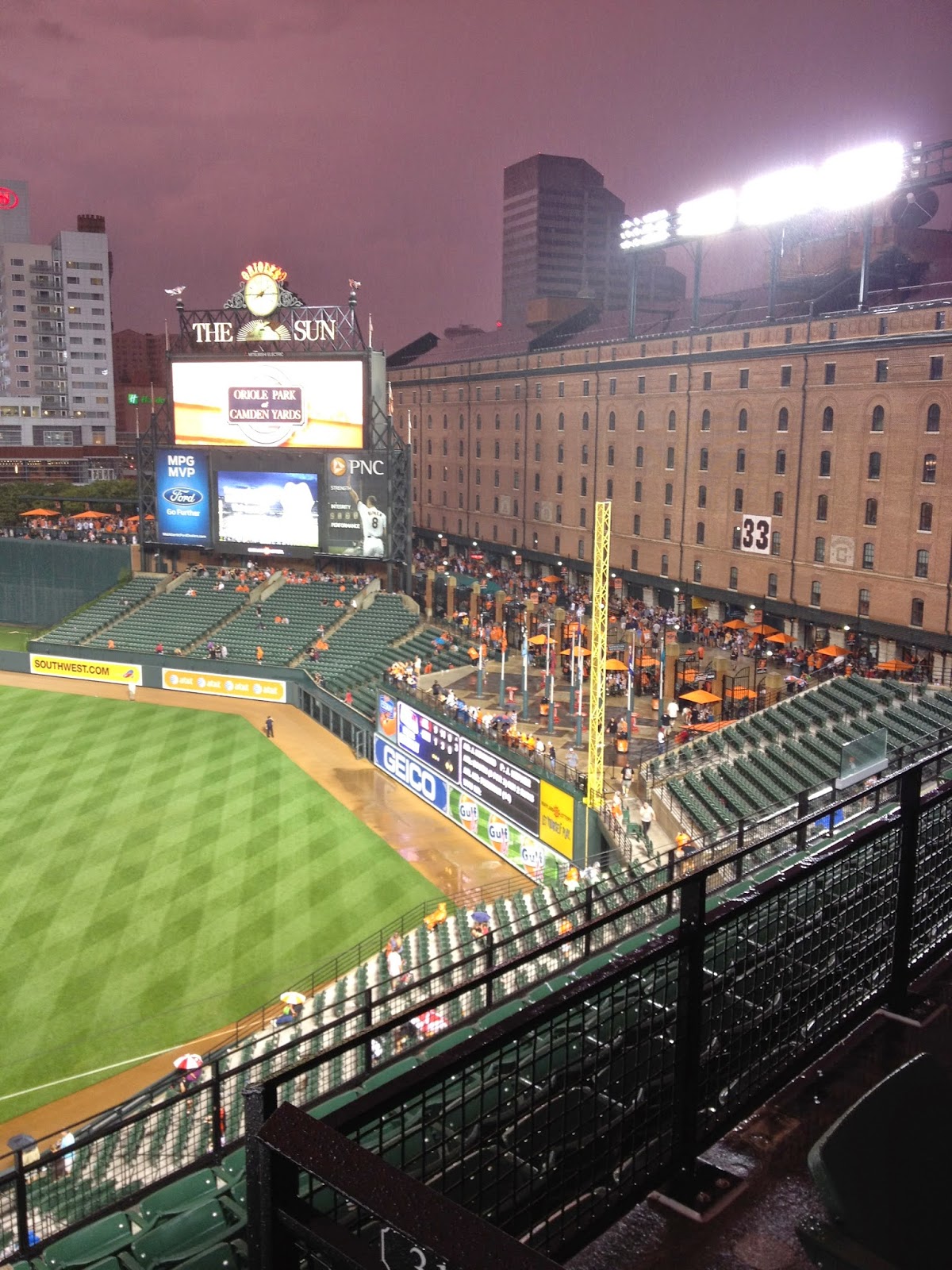 It was becoming increasingly unlikely that the game would be played. The rain was coming down in buckets. Mrs. Tires made a concession run and got so soaked by rain on the way she permanently ruined a pair of shoes. And to come all this way and not get credit for an official visit? Ugh. On the bright side, they showed the Red Sox game on the jumbotron, and we were treated to a brilliant sunset. 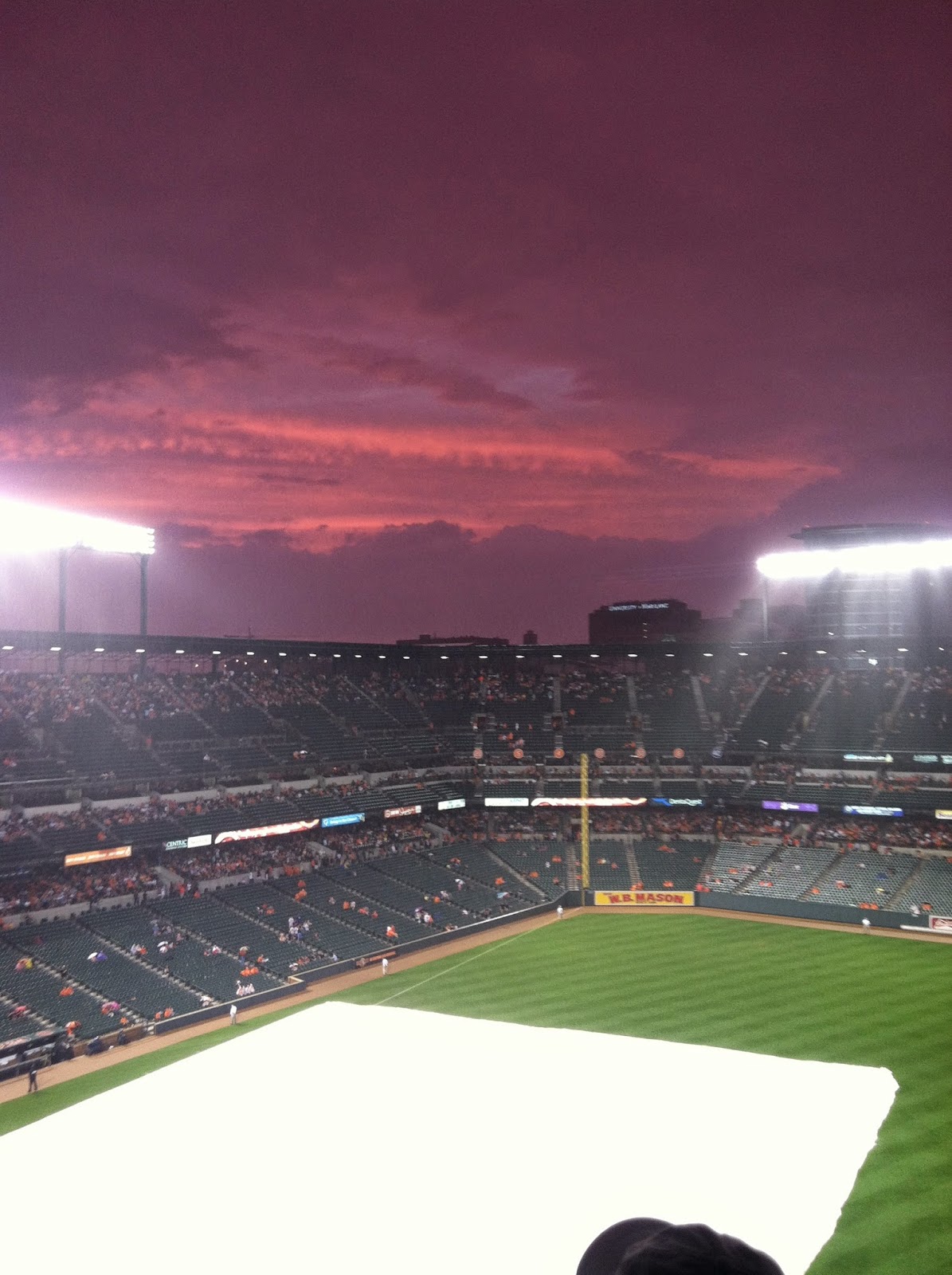 We were getting pretty restless after the first two hours, and as the delay approached the three hour mark, we were ready to throw in the towel and head home. As we started gathering our umbrellas and the cheap replica Eddie Murray statue giveaways we had received, an announcement came over the loudspeaker. The rain was moving out of the area, and they were going to prepare the field so they could start the game. I loudly cheered on the grounds crew as they removed the tarp. 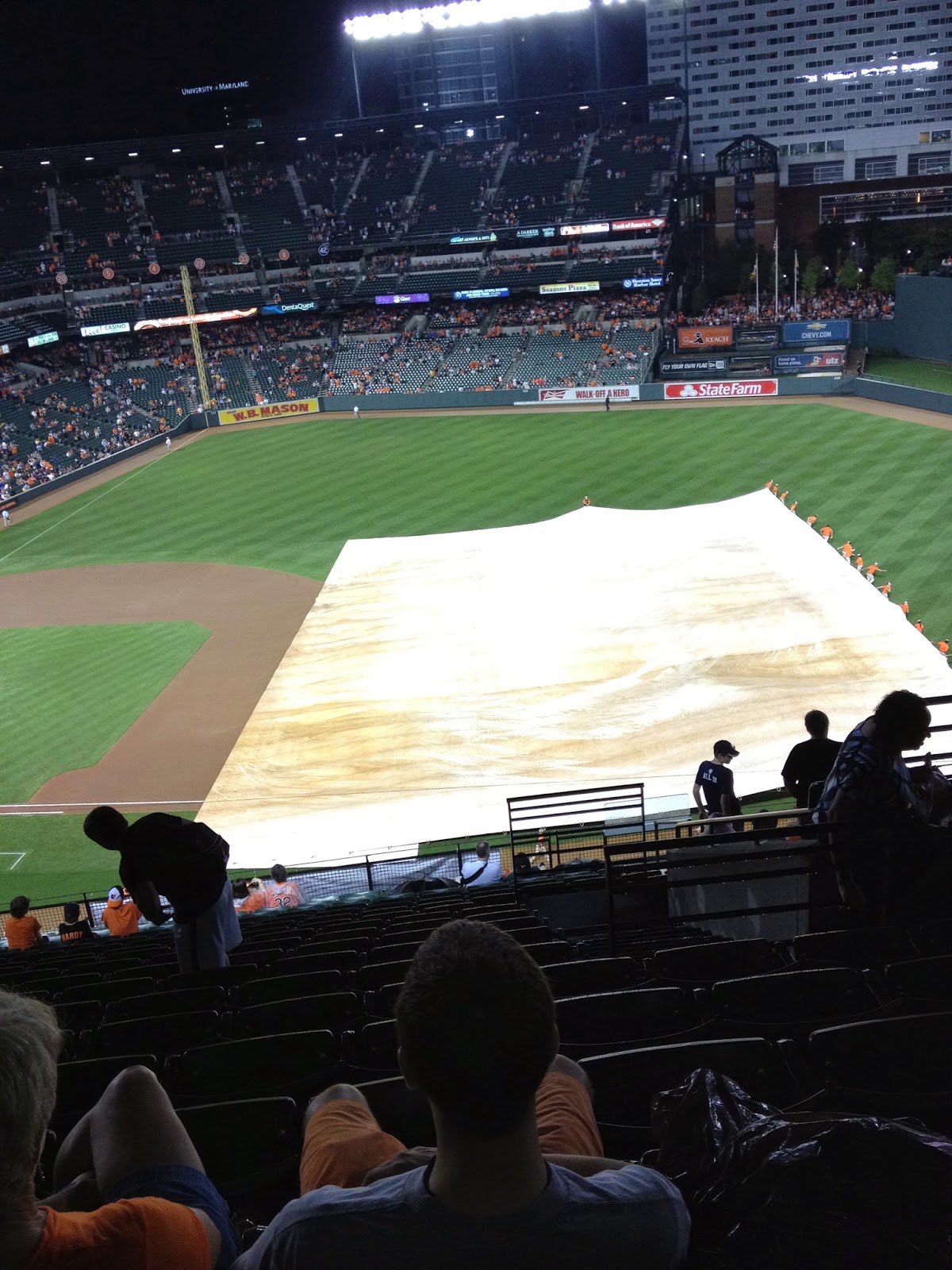 Finally, at just past 10:00 PM, the Orioles took the field and we got to see some certified Major League Baseball action.

The visiting Kansas City Royals got out to an early lead while we sipped some beer and enjoyed Camden's charm.

We did a bit more wandering around Camden Yards during the game, and stumbled upon a playground with a lot of style. We goofed around there for a bit and took some photos.

It was getting pretty late by the time the 6th inning rolled around. The completion of the 6th would mean an official game in the eyes of Major League Baseball, and therefore an official visit to add to the tally. We stuck it out through the sixth and then headed back to DC. Check another one off the list!

For those of you scoring at home, that meant nineteen visits for Steve and seventeen for me.

The next morning we read that the Royals had defeated the Orioles, 7-3 in a game that ended at about 1:15 AM.

Oriole Park at Camden Yards is a real treat, and a must-see for baseball fans and stadium chasers. Its historical significance is matched by its true charm. I would welcome the chance to go again, especially if I could go on a clear, sunny day.


For more on this journey:

Or check out #raymanroadtrip2K12 on on twitter
Posted by Unknown at 7:58 PM