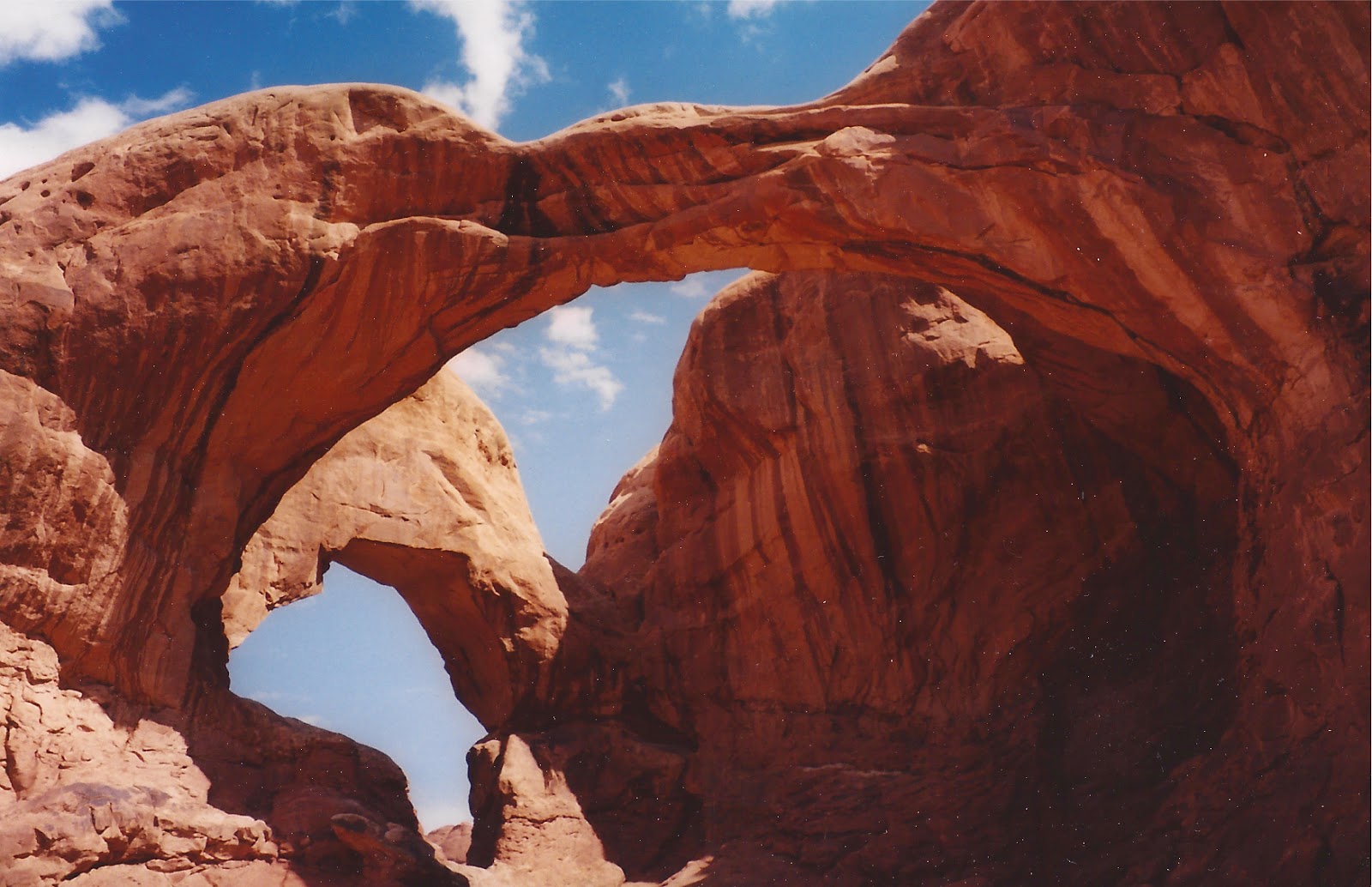 I've made a few trips through Utah, and each one has been a unique adventure.

My first trip through the state was during my cross-country journey with my friend Cein in the summer of 2000. We had just traveled through Nevada and we noticed the terrain was turning red as we made our way east. 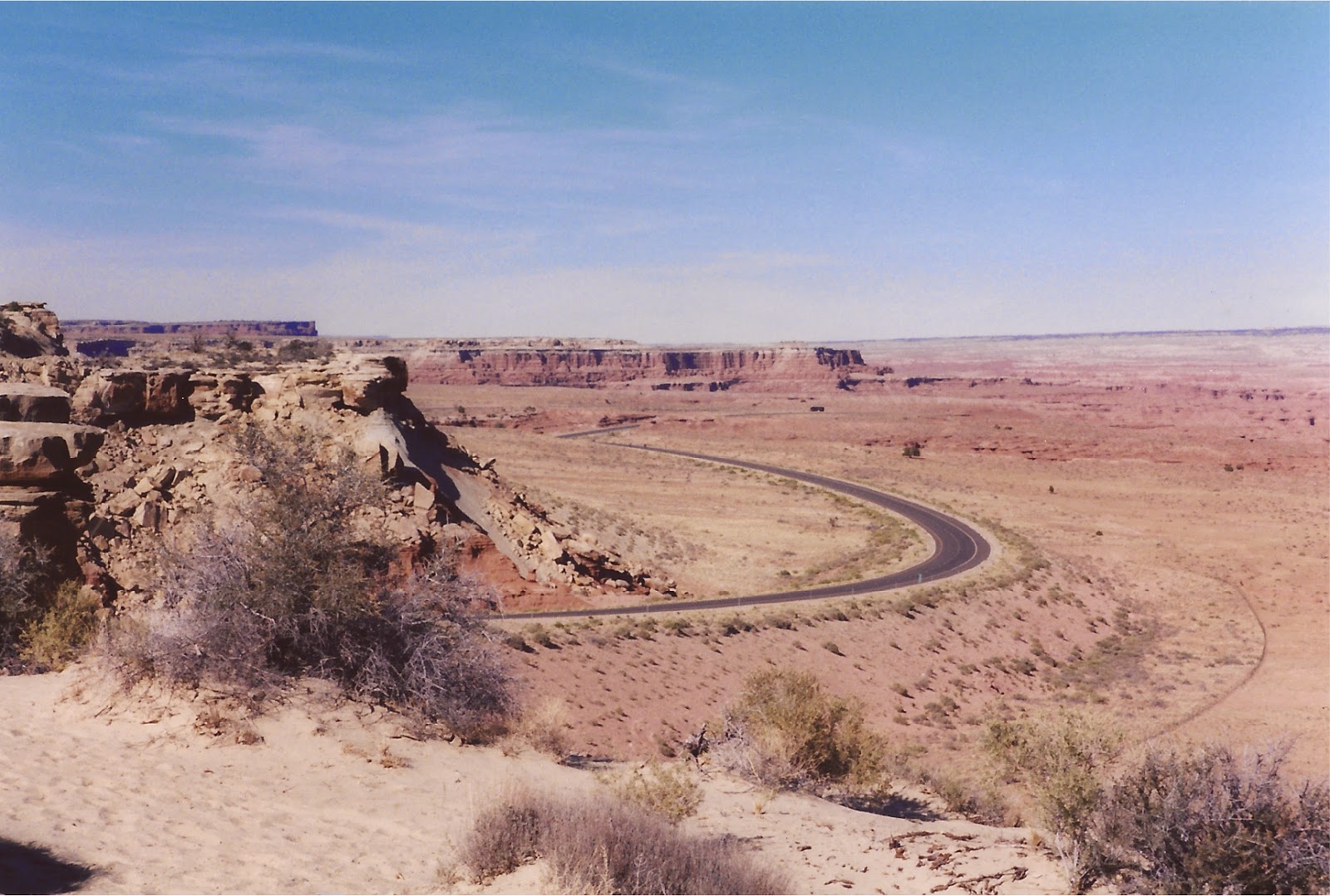 Eventually we made it to Arches National Park, which would become one of my favorite national parks of all time. It features several huge and legitimate Utah arches. They are so odd and spectacular, it's hard to believe they occur naturally. Interesting formations started appearing shortly after we entered through the south side of the park. 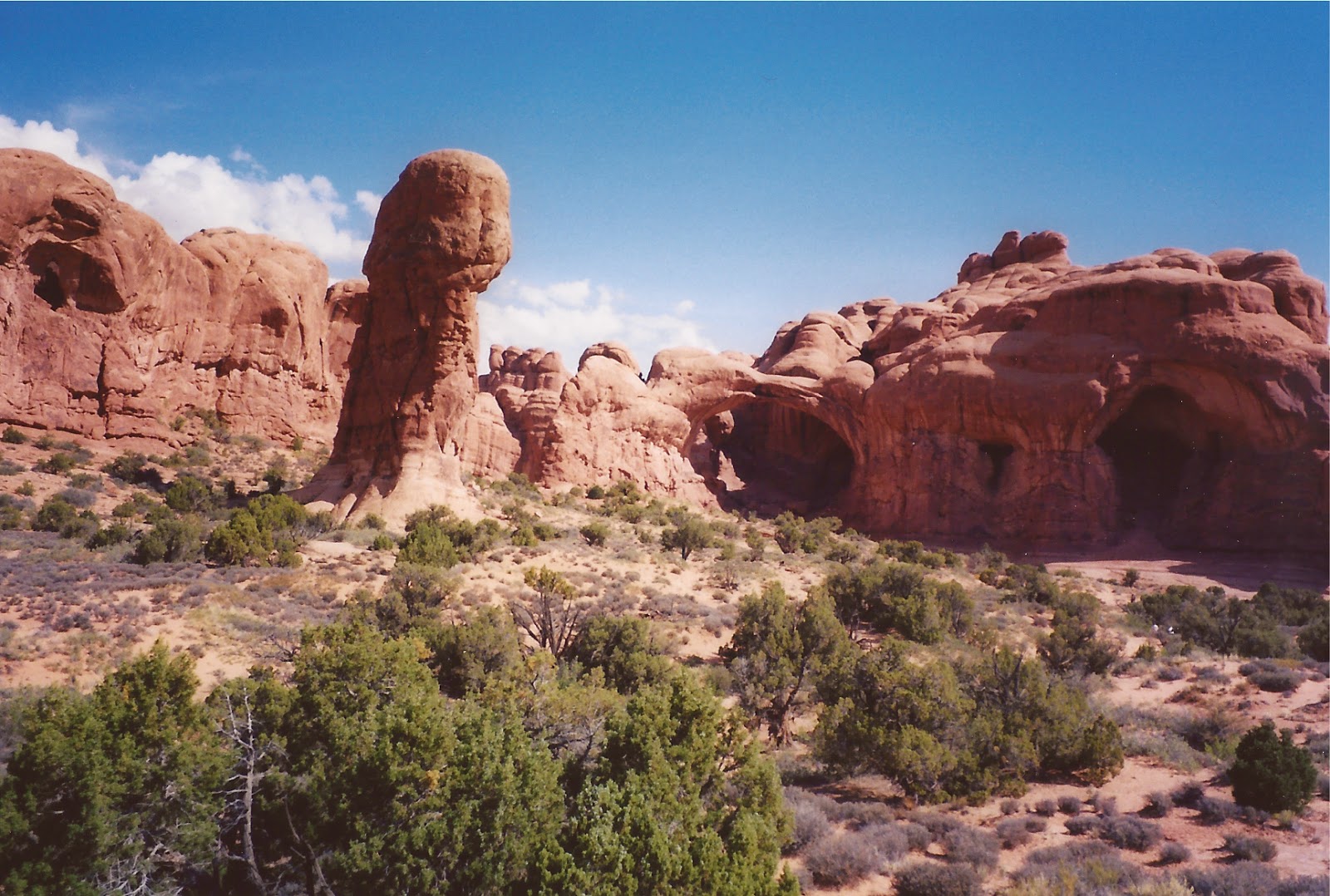 Accessing the arches was pretty easy. Some we drove right up to, and others were accessible via hikes of less than a mile. We got up close and personal with them, climbing on and around them and taking many photos. It's impossible to take a bad shot there, as the red and orange arches stand out so brilliantly against the blue sky. 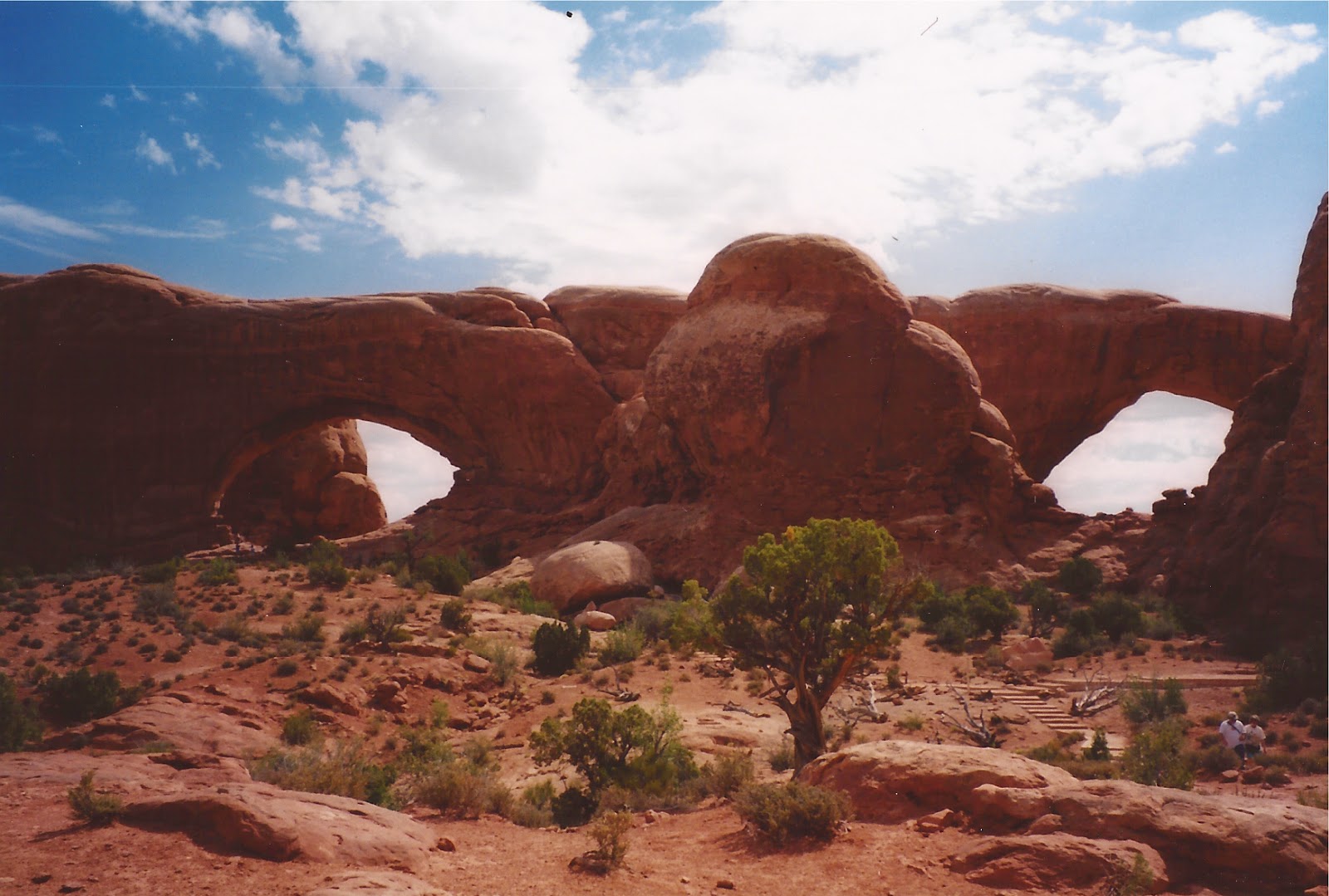 We didn't have a reservation to camp that night, but the very kind and accommodating ranger allowed us to set up our tent on a plot that was technically closed for construction. I liked the park so much, I made a point to visit it again during my next cross country trip in the summer of 2003. 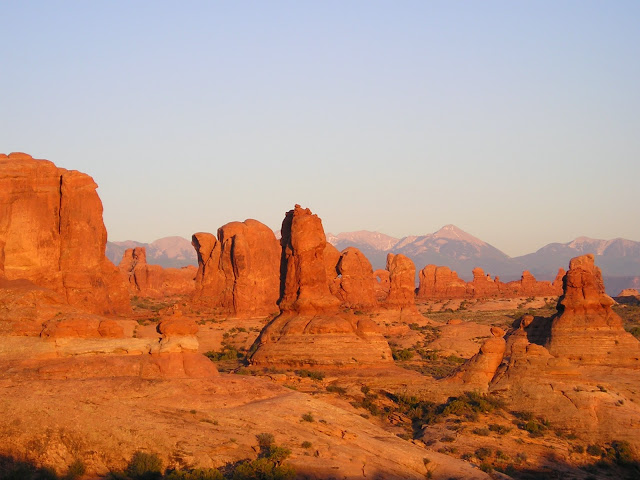 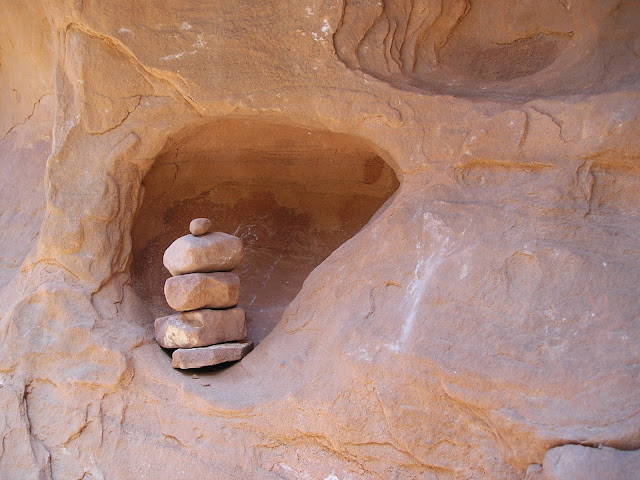 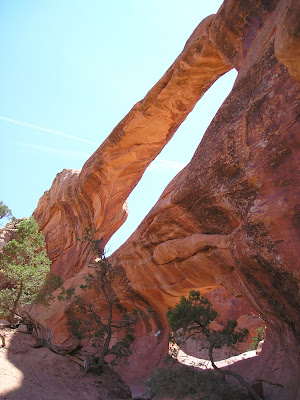 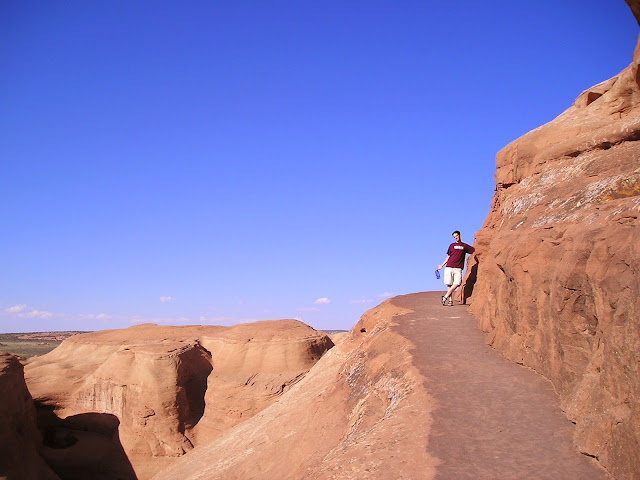 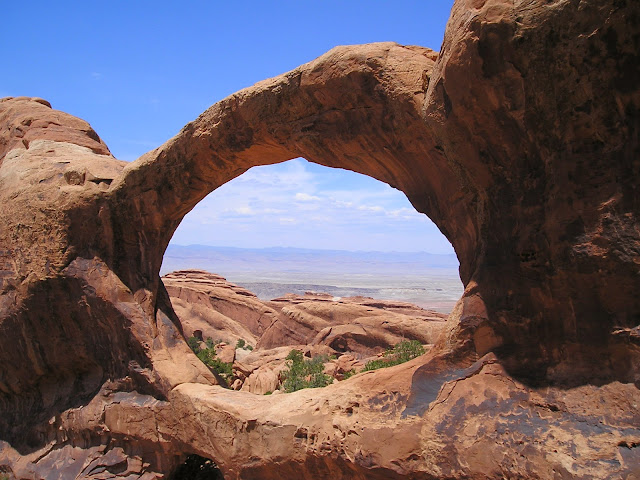 Just outside the park lies the city of Moab, a charming and unique destination. The shops sell lots of Native American art and other items that fit the style of the desert. I have a distinct memory of spending several hours in a bookstore in town, partially because the store was such a gas to explore and partially because it provided an air conditioned break from the intense Utah heat.

Several years later, I flew out to visit Cein in Salt Lake City. We were car-less then, but did manage to make one trip into the city, where we visited Temple Square. What a trip this place is! Located in the center of downtown, this huge campus houses many Mormon churches and facilities. Neither of us are Mormon, so we went there to get a respectful glimpse into the lives of Utah's chosen people. Ok, fine. We went to gawk.

The first thing that struck us during the tour was our great luck in scoring a beautiful young woman as our tour guide. She was in her early twenties, very kind and drop dead gorgeous. As we walked the grounds and ran into other tour groups, we noticed that every single one of the tours was lead by a young female tour guide, all of whom were total knockouts. Quite the marketing technique!

As the tour continued, we were lead to a statue of two giant seagulls perched high on a slender column. Where I'm from, seagulls aren't anything to commemorate. I had always thought of them as flying rats. But there they were, in polished gold and perched high on a pedestal. Like everything on the grounds of the Mormon temple, there was a story behind this odd tribute. Apparently, shortly after the Mormons settled in Utah, they encountered an infestation of crickets. To combat them, they organized a massive cricket killing that involved eradicating the bugs and their homes and food sources. No, wait, that's not what they did. They sought out the crickets' natural predators and let nature take its course. No, no, that's not it either. What they did was pray to God and ask him to take care of the insect problem. And whattaya know? Their prayers were answered. Seagulls flew in to Utah and feasted on the crickets until the crickets were gone for good. It was a true miracle, and one they chose to commemorate with a gorgeous monument to these flying rodents. Hard to digest. Then again, so are crickets.

The tour ends in a huge domed structure that sits in the middle of the campus. As we approached the dome, we joked that it would contain the entire universe and Jesus would be in the center of it all. After a few snickers over this, we entered the dome and learned that our sarcastic remarks weren't jokes, they were psychic premonitions. Sure enough, the interior of the dome is painted with a mural of the universe, with planets, stars and all. And sure enough, in the middle of it all stands a gigantic statue of Jesus Christ. Quite the symbol, the entire world revolving around this figure. What's more, it talked. A booming voice comes out of the loud speaker and declares "Behold! I am Jesus Christ, your lord and savior," and then expounds upon his beliefs and his life story. There was some majesty to this, but at the same time it was over the top and borderline ridiculous.

We went to Temple Square to have a few laughs at the expense of this odd religion. The tour provided non-stop fodder, so we weren't disappointed.

My apologies to anyone that is Mormon for the snark contained in this post. This Jew hereby affords you a few jew jokes to use as you see fit.


I would love to visit Utah again. I'd jump at the chance to visit Arches for a third time, and I'd also like to visit the highly regarded Zion National Park. Unfortunately that's not likely to happen, as I put myself at risk of jail time during my last trip through the state.

After spending the summer in LA, I was on my way to Chicago to set up permanent residence. My old friend Cein was living in Park City at the time, so I planned to drop by on the way. Upon learning that I was coming, Cein asked if I would bring him a case of beer from out of state. The alcohol content in beer is lower in Utah due to Mormon-inspired law, so he was hankering for the real deal. I gladly obliged, and brought a bottle of wine for his parents as well.

I approached Park City after nightfall, and passed through a school zone on the way. I was going 45 mph, disregarding the 25 mph school zone sign as it was after 9:00 PM. For this egregious error, I was pulled over by not one but two squad cars. The cops interrogated me, drawing out my entire story about moving to LA for a girl, living with my Uncle Steve, changing my mind after a few months time, my aspiring comedy career, the personal crisis I went through to arrive at my decision and my plans for the future.

After telling them my life story to date, I receiving a stern lecture on speeding through a school zone. The conversation turned to the case of beer that was clearly visible in the back seat. I told them I had purchased it in California that day and mentioned the wine as well. Upon learning this, they walked back to their cars, keeping me waiting for a good twenty minutes before returning.

"We think it might be illegal for you to have that in the state of Utah. Would you mind if we searched your vehicle?" I was a bit taken aback by this. What did they mean, it MIGHT be illegal? They're cops. Isn't this something they should know?

I didn't have anything to hide in the vehicle, but on principle I wasn't going to let these under-informed cops bully me.

"I've told you everything I have in the car," I said, playing it cool while my heart beat so hard it practically touched the steering wheel, "No, you may not search my car!"

The cops were taken aback by this and shared surprised looks with each other.

"Well then, I'm writing you a speeding ticket. We'll expect you to show up in court in two weeks."

"But I'll be in Chicago in two weeks. Can't I just admit guilt and pay a fine without showing up?"

"No sir, that's not an option. See you in court." the cop said smugly.  He scribbled, tore the ticket off his notepad, handed it to me, walked back to his car and drove off.

It would have been practically impossible for me to appear in court in Utah, so I ignored the ticket. I had a California license with my Uncle's address on it at the time, so a few weeks later, a letter demanding that I appear in court showed up in my Uncle's mailbox. The letters got more and more intense over time until they started threatening jail time. Eventually my Uncle moved and the letters stopped. I got away with that one, but I'm sure they'll catch up with me if I visit Utah again. Because of that, I'll be avoiding the state entirely from now on. Too bad. It's a beautiful state.

Must See in Utah:
Check it Out:
The Next Time List:
Posted by Unknown at 5:26 AM