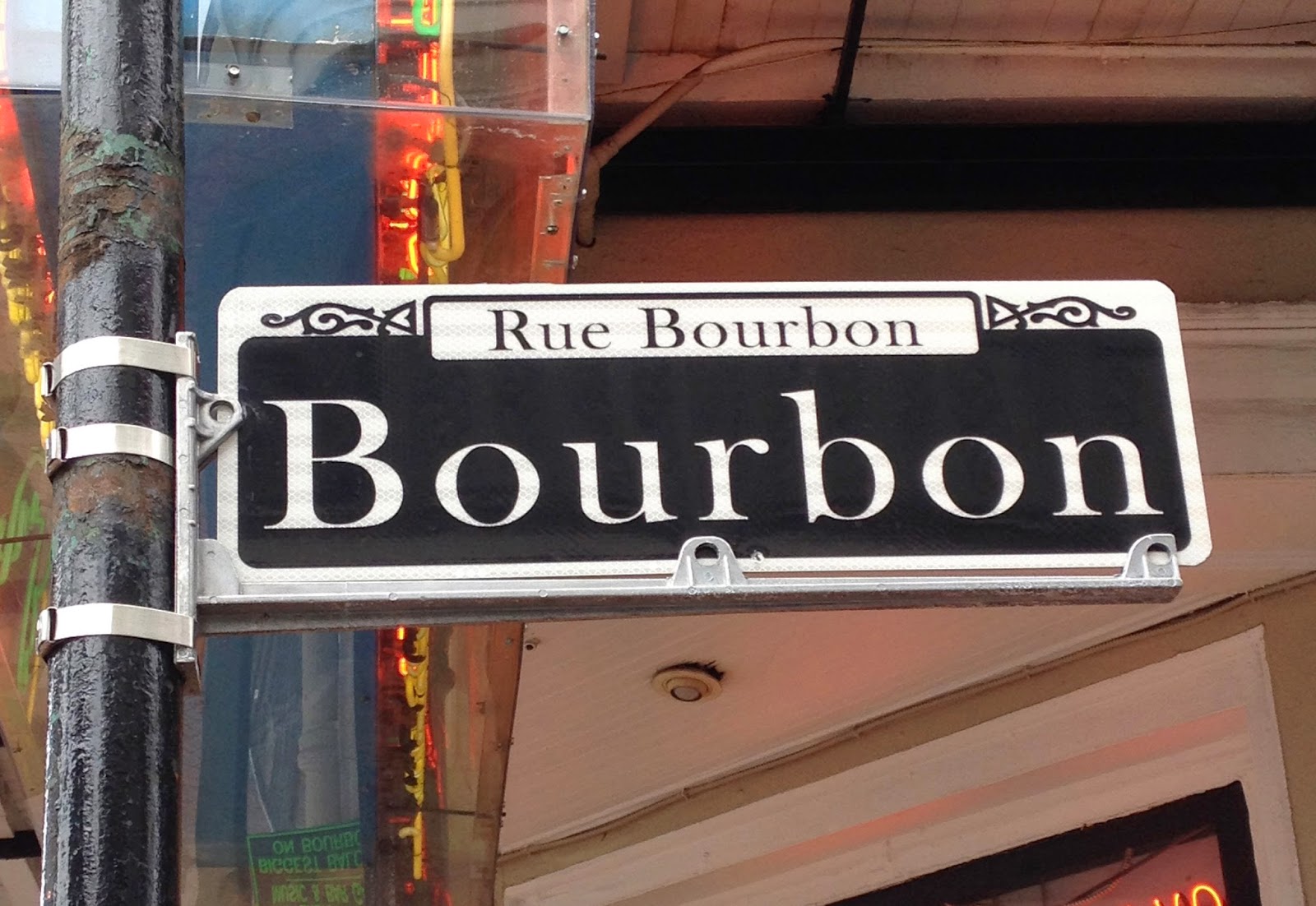 New Orleans had been high on my list of travel destinations for a long time, and I finally got the opportunity to visit when I served as my buddy Jon's best man and planned his bachelor party in 2014. We chose New Orleans because it's known for its world-class partying and would provide an epic sendoff to Jon's bachelorhood.

While it ended up being 100% worth it, planning the party was a beast. This post focuses on the high-level details of the trip, which will be helpful for anyone who is planning a bachelor party or other party-focused trip to NOLA. I've omitted the specific stories of the goings-on to protect the not-so-innocent.

There are about six hundred and fifteen thousand hotel options in New Orleans, so the initial search for lodging was a total mess. Fortunately, a fellow groomsman had a family connection to the Bourbon Orleans hotel, so it ended up being an easy choice. This place worked out great for us and I recommend it to anyone who wants to be in the French Quarter. They accommodated our ever-changing reservations, the staff was kind and helpful (even when we were clearly drunk out of our minds when talking to them), the rooms were large, and best of all, we could step out of the hotel and be right on Bourbon Street.

I spent the early part of the first day in New Orleans occupying seats in the lobby and greeting our fellow bachelor partiers as they checked in. The early arrivals hit New Orleans' most famous street despite the pouring rain. Fortunately, the weather cleared up as the day went on, and by about 5:00 everyone had arrived, the rain was gone, and we were ready to get the party started.

Friday night was designated as Bourbon Street Night. This insane party street is lined with every type of bar and club you could imagine. Some of the bars were total dives and featured chilled out bands or juke boxes, while others were huge warehouses with blaring music. They all offer "drink specials." I put that in quotes because the specials were often something to the effect of 'buy one Miller Lite, get one free,' but the first Miller Lite was eight dollars. Sheesh.

One of the bars we walked into had a "stand up comedian." He gets quotes because he was a poor excuse for a comic and an insult to the craft. There were only three or four people in the bar when our pack rolled in, so we became his main target. Little did he know our group was largely made up of improv comedians, so for every insult he lobbed at us, we lobbed three back. We were getting annoyed quickly, so when he shouted at us and said "hold on, I've got something for ya" and disappeared backstage, we used it to our advantage and bounced out of the joint before he could deliver his punchline.

Despite the lousy specials and lousy jokes, we had a great time wandering, popping into bars for drinks or shots, and carrying our beverages with us down the street. There's a really fun vibe to the entire street that's mixed in with interesting architecture and underlying seediness.


Eventually we made it to the other end of Bourbon Street, where we had a reservation at the Red Fish Grill. Choosing the restaurant for Bourbon Street Night was the biggest headache of the planning process. I needed a place that was on or near Bourbon Street, could accommodate a large group, offered some form of Louisiana cuisine (even if it had to be the touristy version) and was not outrageously expensive. As I researched potential eateries, I found that many of the restaurants required deposits, paperwork, commitments to exact head counts and a promise to pay a penalty if our party was larger or smaller than originally reported. I was not a huge fan of this notion and tried to avoid places with harsh penalties when it came to head counts.

The Red Fish Grill met our criteria, as they offered delights such as jambalaya, shrimp and alligator sausage gumbo at a reasonable cost. I had to sign a contract and choose a set menu, but the conditions were reasonable as they did not penalize groups until more than two people in the party flaked.

I was a bit nervous about this place when we first arrived, as it was huge and bustling, and having a reservation meant being given a number that would later appear on a monitor when our table was ready. In this regard, it seemed more like a deli counter than a restaurant. However, once we were called and seated, everything was great. The food was delicious, the menu afforded us a huge variety, and they even broke things out into separate checks despite the contract stipulating otherwise. The BBQ blue crab claws were my favorite bite. The alligator sausage gumbo was another hit.

If you're insistent on having dinner on Bourbon Street as we were, the Red Fish Grill is a great choice.

After the meal, we headed back into the chaos that is Bourbon Street, where we partied the night away. Our group split off here and there, but stayed together for most of the evening. 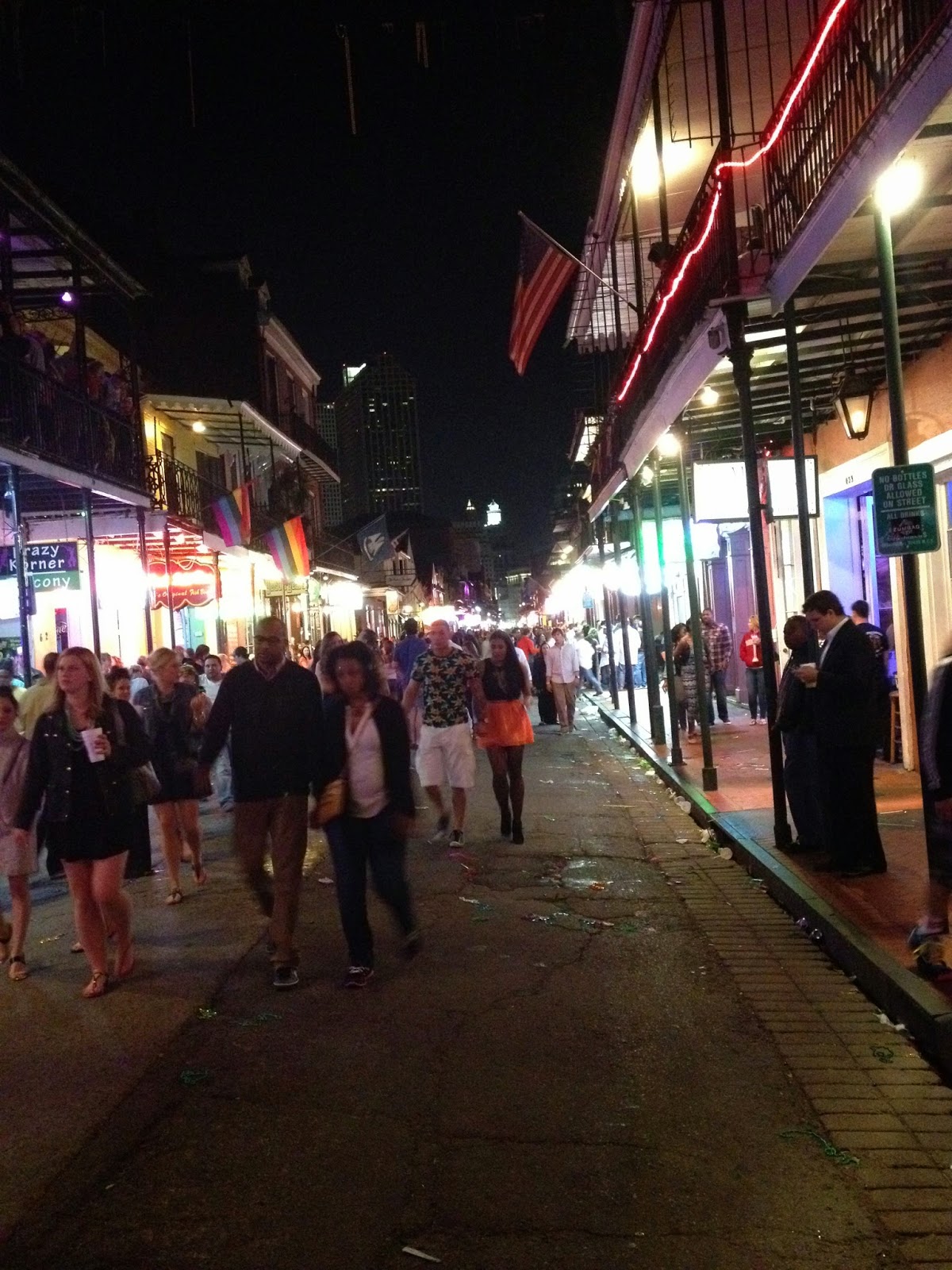 We gathered at noon the next day for a swamp tour, where we would board an airboat to chase alligators. There are several companies that offer this service, and most offer transportation to and from your hotel for an additional fee. I called around to find the best deal, and ended up going with Airboat Adventures.

A bus picked us up at our hotel as planned. We had a couple of drinks from our cooler of beer on the forty-five minute ride out to the swamp. The ride was smooth and we were pumped by the time we got to the boat docks.

When our number was called, our entire party (including the cooler) hopped on an airboat and we were fitted with industrial headphones. The boat was just as I imagined: long and flat and with a huge fan in the back to push us through the swamp. 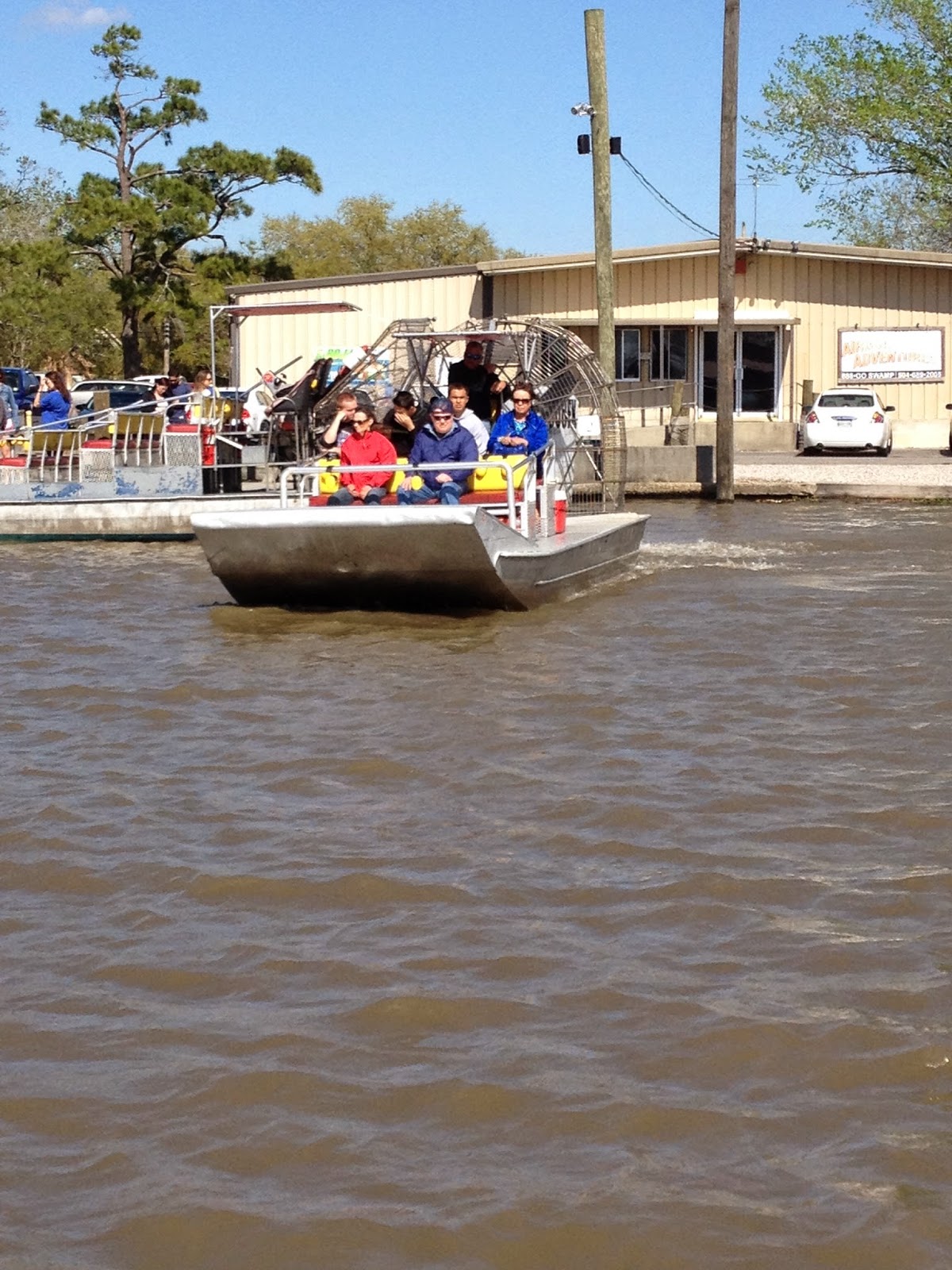 Our guide was friendly and a bit of a character, and the ride was thrilling and fast. Good thing we had those headphones, as the boat fan was really loud. 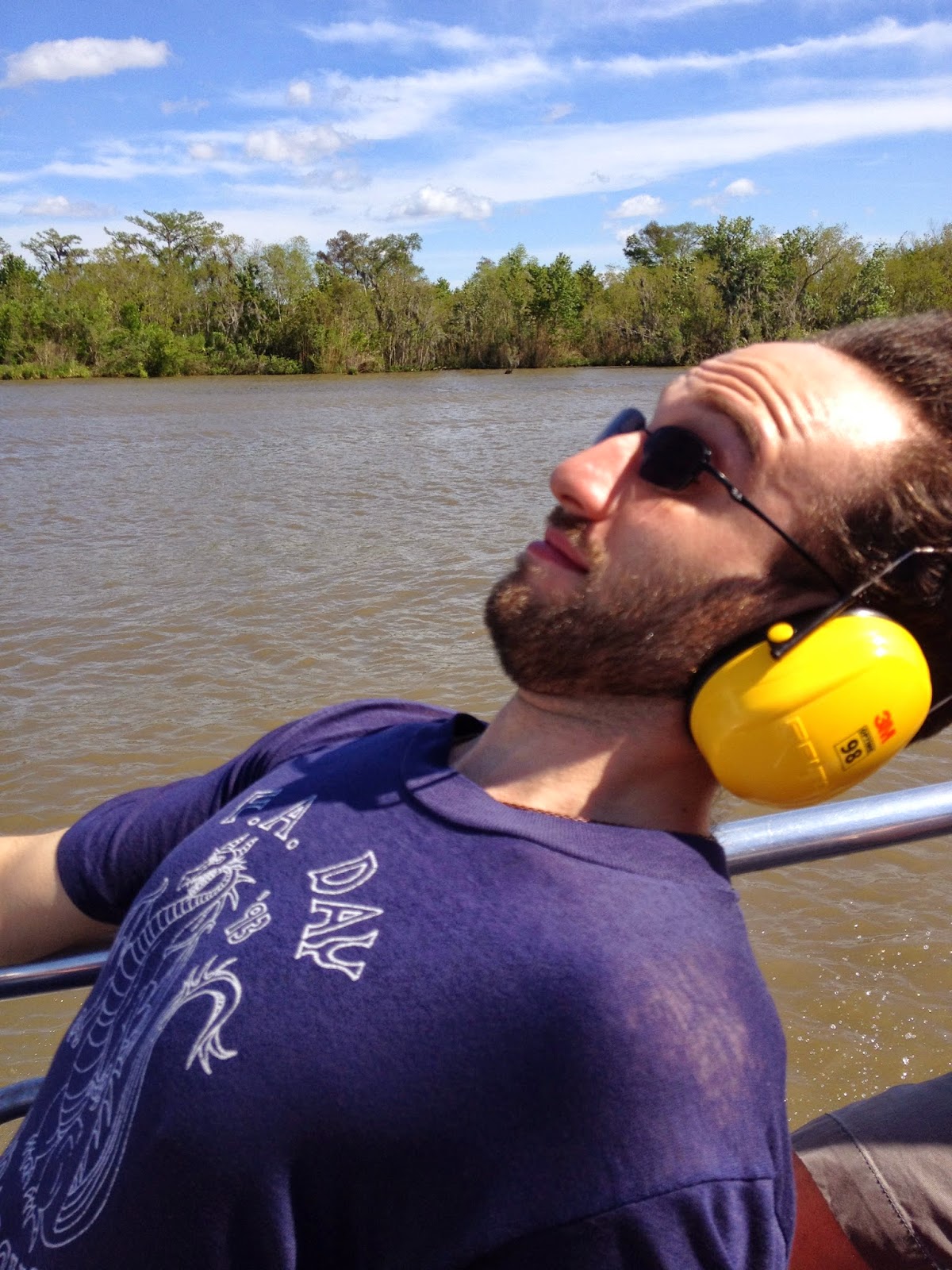 Louisiana was experiencing a drought when we were there, so the water level was low and the alligators were sparse. We cruised to a few key spots with no luck, but eventually we had a sighting. The guide made some calls to the gator and tempted him with marshmallows, and eventually he came by for a close-up. He was an ugly, menacing and fascinating creature. We saw one or two more gators as we cruised on through the swamp.

We were having a great time cruising on the boat and our spirits were high. At one point we witnessed another boat's tour guide dive into the water and swim after a gator, which was quite amusing and impressive. We were a bit disappointed that we only saw a small number of gators, but there's not much you can do to control nature. 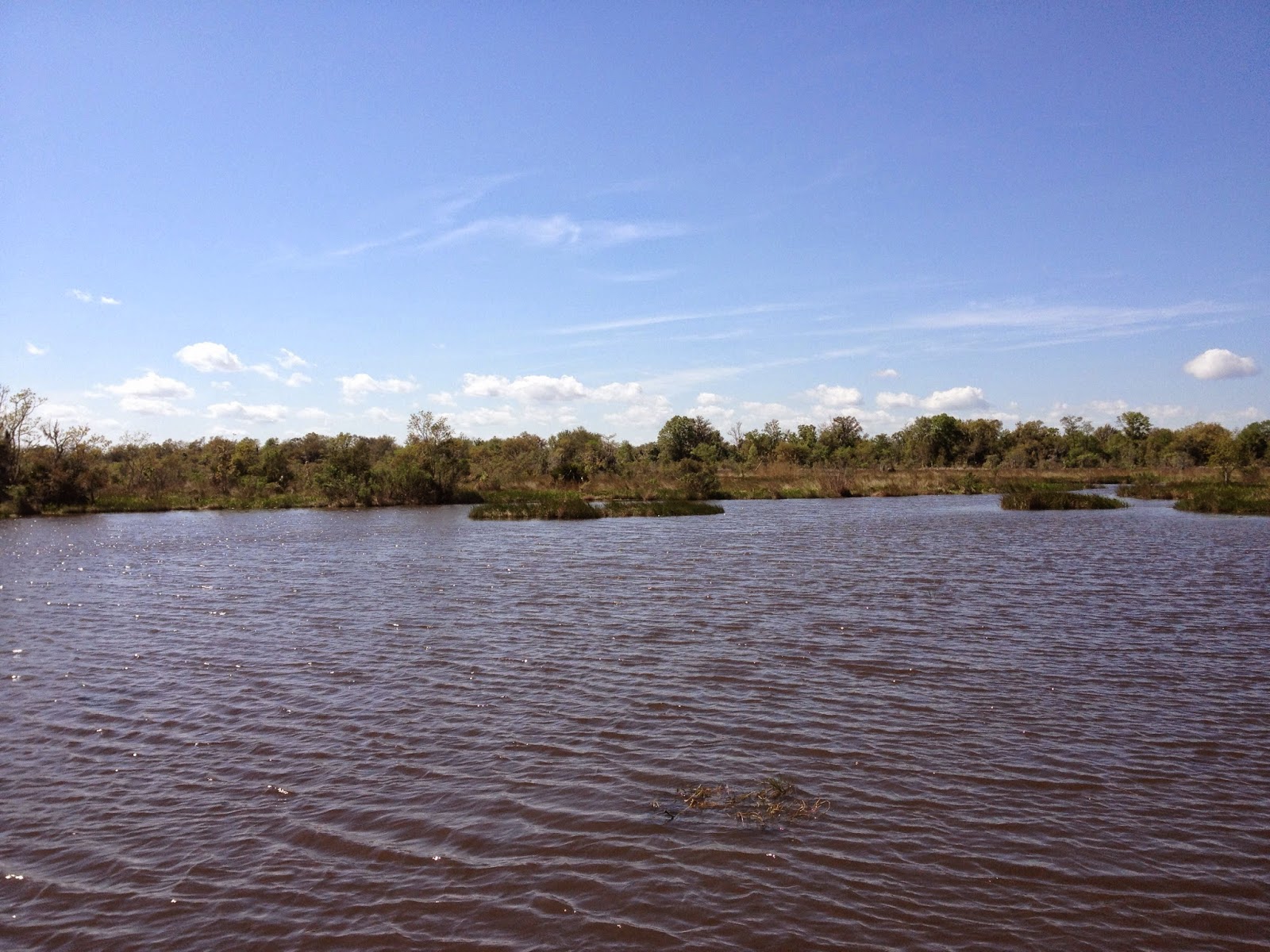 When the tour was nearly complete, the guide pulled the boat over to the edge of the marsh. The purpose of this stop was twofold. The first was to allow interested parties to pee over the side of the boat. The second was to introduce us to his friend, a baby alligator that he kept in a small cooler. He passed the gator around and we reveled in the opportunity to handle a real live gator. We took turns holding it, petting it and laughing at it as it tried to bite us with its tiny, rubbery teeth. This was definitely a highlight. Not everyone can say they've held an alligator.

I highly recommend a swamp tour as part of any visit to New Orleans, and I recommend Airboat Adventures as your tour company. The boat was fast, the beers were flowing, and the gators were just plain cool.


After the tour, it was back to the hotel for some free time. Some ventured back out onto Bourbon Street while others napped. We met back up again that night and headed to another part of town called East Riverside, where we had reservations at Superior Grill, a festive Mexican joint known for its margaritas. This place turned out to be a great place for a bachelor party dinner. The atmosphere and staff were a lot of fun, the food was some of the best Mexican I had ever tasted, and it was casual and affordable. We spoke to a couple there that were celebrating their 45th wedding anniversary. When I asked them the secret to their long and happy marriage, the wife's answer was simple. Jewelry. 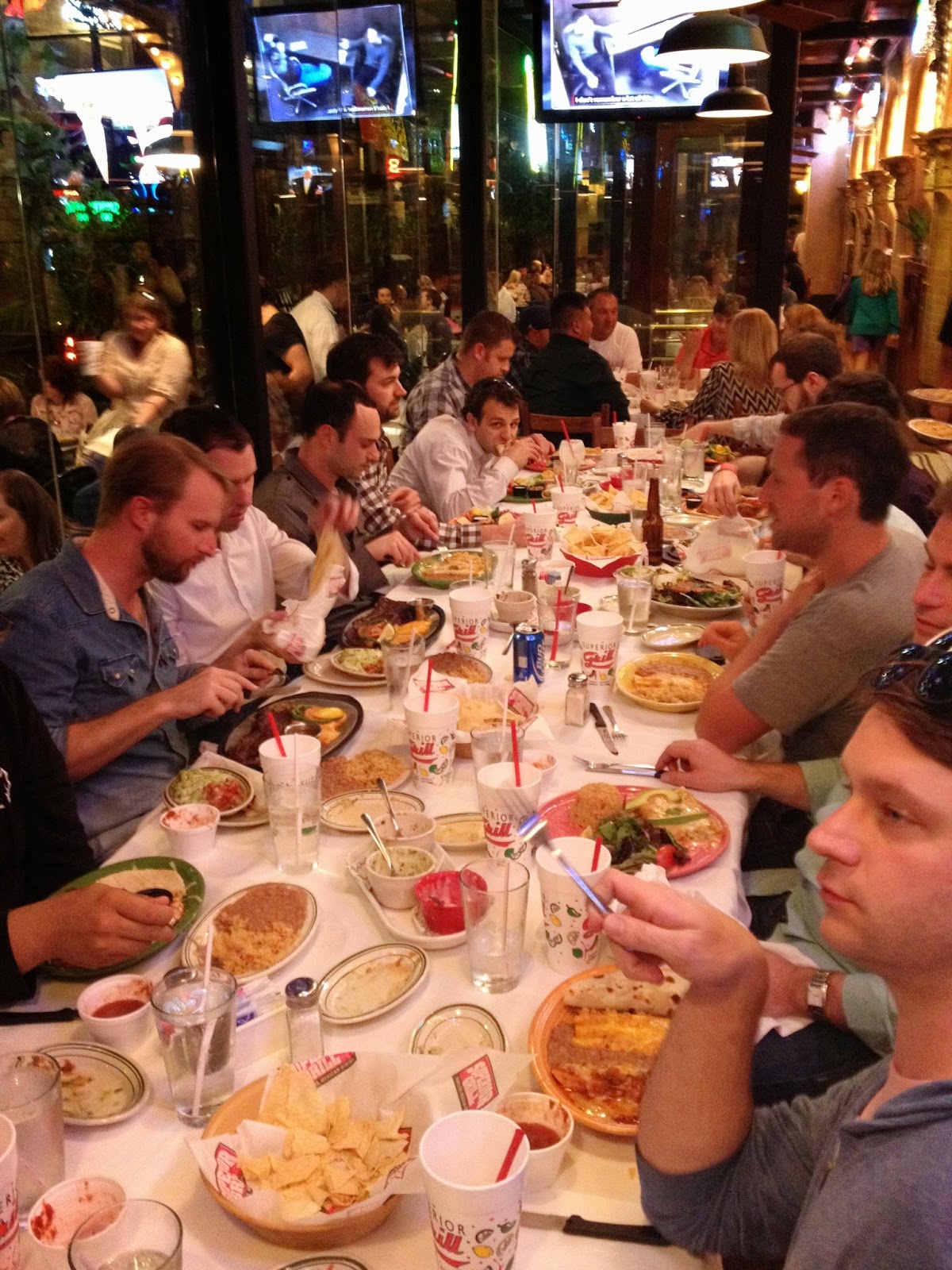 After dinner, it was off to Ms. Mae's, a noted New Orleans dive bar and a personal favorite of the bachelor. The bar was quiet when our large crew rolled in. "What is this, a party bus?" The bartender asked another patron as I approached. "It's business." I said, turning to the otherwise empty bar. "Good point," he said, standing up straight and grabbing me a pint glass.

Ms. Mae's is a quiet, cozy bar, which was a nice change of pace after dodging a million other bachelor parties on Bourbon Street the night before. It's filled with game tables such as air hockey and foosball, which were worn down, but fun. In fact, that's how I describe the whole place. If you're looking for somewhere off the beaten path for a low-key time, look towards Ms. Mae's.

We spent a good hour or so at the bar before heading back to the main drag. Getting back proved difficult. I was told there would be plenty of cabs in the area, but it took us a half an hour to get one cab, and a full hour to get enough to transport all of us.

Once we were all in cabs, we headed to Faubourg Marigny, an area of the French quarter just off Bourbon Street that houses a large cluster of music venues. Some of the venues required advanced tickets, while others required just a cover charge. We had a couple of options lined up for the evening, but didn't end up going to either of them, instead opting to wander into whichever clubs caught our eye. We started at The Maison, a large, open venue that featured a brass band with a lot of energy. While the acoustics were a bit of a mess, the band was a lot of fun and had us jumping around and dancing like crazy.


As this club got more crowded, we moved on to Vaso, where we caught another great band. We were hooting and hollering as they played on.

Eventually the group stumbled out of that bar and back to Bourbon Street, where we got blissfully lost in a sea of parties.

New Orleans was a hell of a lot of fun. I had anticipated a visit for a long time, and it did not disappoint. If you're considering doing a bachelor party there, go for it! Bourbon Street is a nonstop party, so you will have an amazing time. It was also clear that New Orleans offered a lot more than just the party scene, and I hope to return to truly experience the city sometime soon.
Posted by Unknown at 10:32 AM