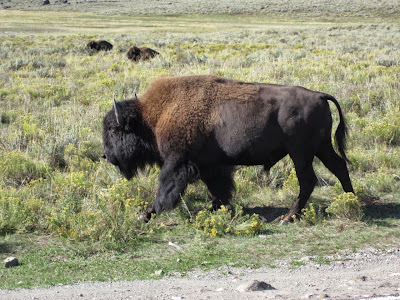 Mrs. Tires and I aren't morning people, but as I mentioned in Part 1, we had occasion to start our second full day in Yellowstone with an early wakeup call. We were headed to Lamar Valley, home of many types of animals, including the grey wolves that were reintroduced into Yellowstone in the 1990s. The best wildlife viewing is in the morning and evening hours, and not wanting to do another Yellowstone drive at night, we were up and out the door at about 5:00 AM. The route took us through the north part of Grand Loop Road and then off the main drag. As soon as we pulled off of Grand Loop, we got what we came for, a real life wildlife encounter. Actually this might have been more than we bargained for. A huge herd on bison was crossing the road to get to the Lamar River. They casually strolled between cars while we watched in awe. They were so close to our car, it was both thrilling and unnerving. They're massive beasts and can be dangerous. Thankfully none of the ones strolling by our car wanted any trouble. I imagine the "a bison attacked my car" conversation would be a difficult one to have with the representatives at Hertz.

After we had encountered our first bison jam, we continued down Lamar Valley's main drag, encountering many more bison and several pronghorns. Pronghorns are more upright versions of gazelles, and they have horns that are, well, prong-like. They're quite graceful and unusual. 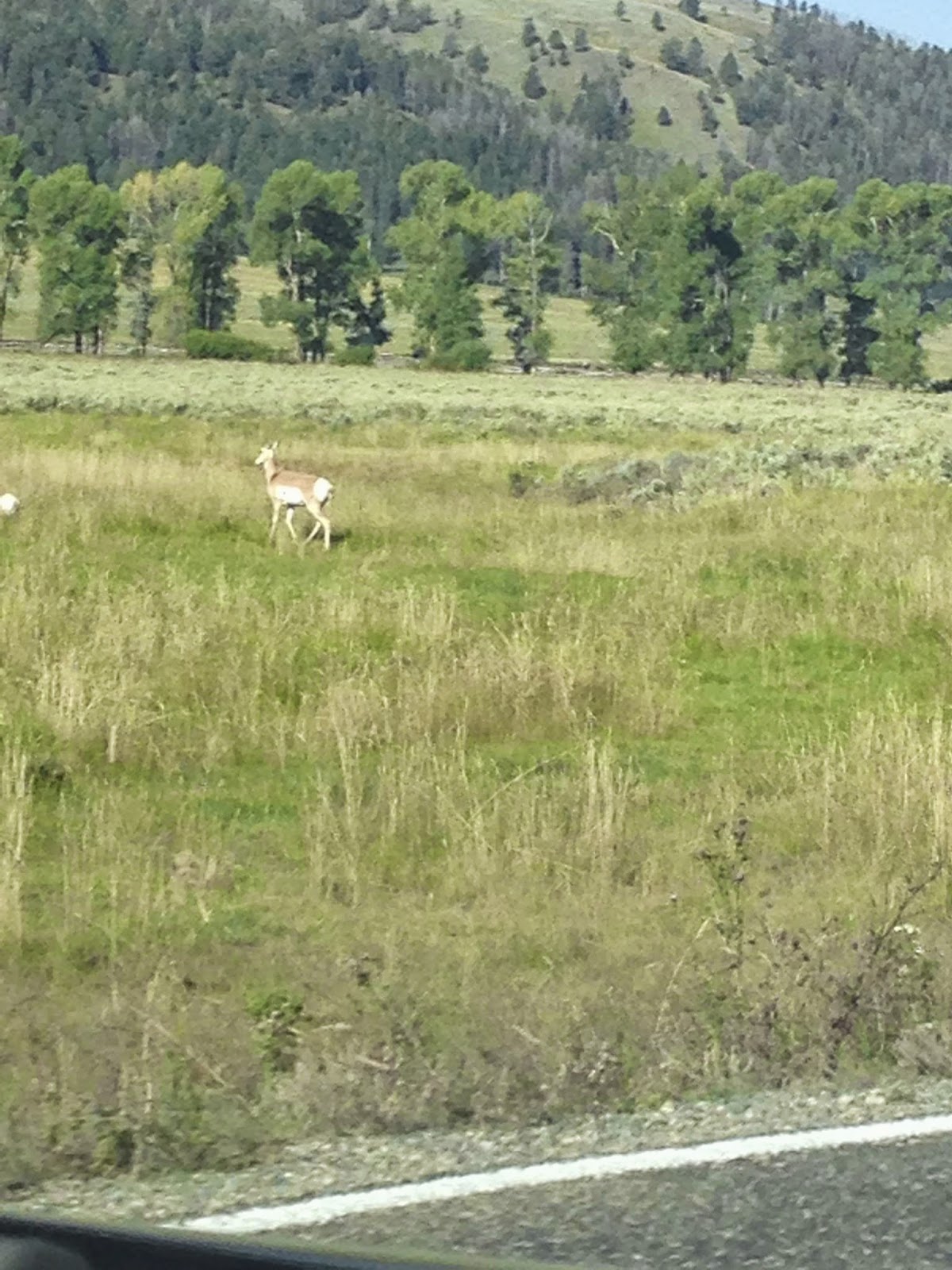 At one of our stops to admire the wildlife and the view, we stood next to a well-equipped man with a fancy camera and a two-way radio. We heard his radio squawk "we've got animals." We weren't sure what that meant exactly, but knew it had to be code for something, as this very innocent-sounding comment got this guy packing and moving in a hurry. We figured out what the fuss was all about at our next stop, where there were a ton of people and cars. We inquired and found out they were all tracking a wolf! I busted out the binoculars and started searching the area they were pointing towards. It took a while because he was pretty far away, but I caught a certified glimpse of him and stood transfixed on this rare and wild creature. I handed off the binoculars to Mrs. Tires, but during the transition, the wolf ran into the woods, never to be seen again. I was really glad to have made the sighting, but was sorry Mrs. Tires didn't get to see it. It wouldn't be the only time Mrs. Tires missed out that day.

After the wolf sighting, we continued down the valley and saw more bison and pronghorns, plus a few mountain goats. As the morning progressed, the valley got more and more crowded and eventually we called it and turned around. On our way back we had another close encounter with the bison. Having gotten a bit more comfortable in our surroundings, we got out of our car while bison were just fifteen feet away. Some yelled at us that were were too close to the animals while we took this shot. Whoops! 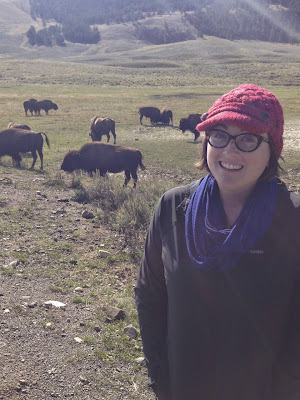 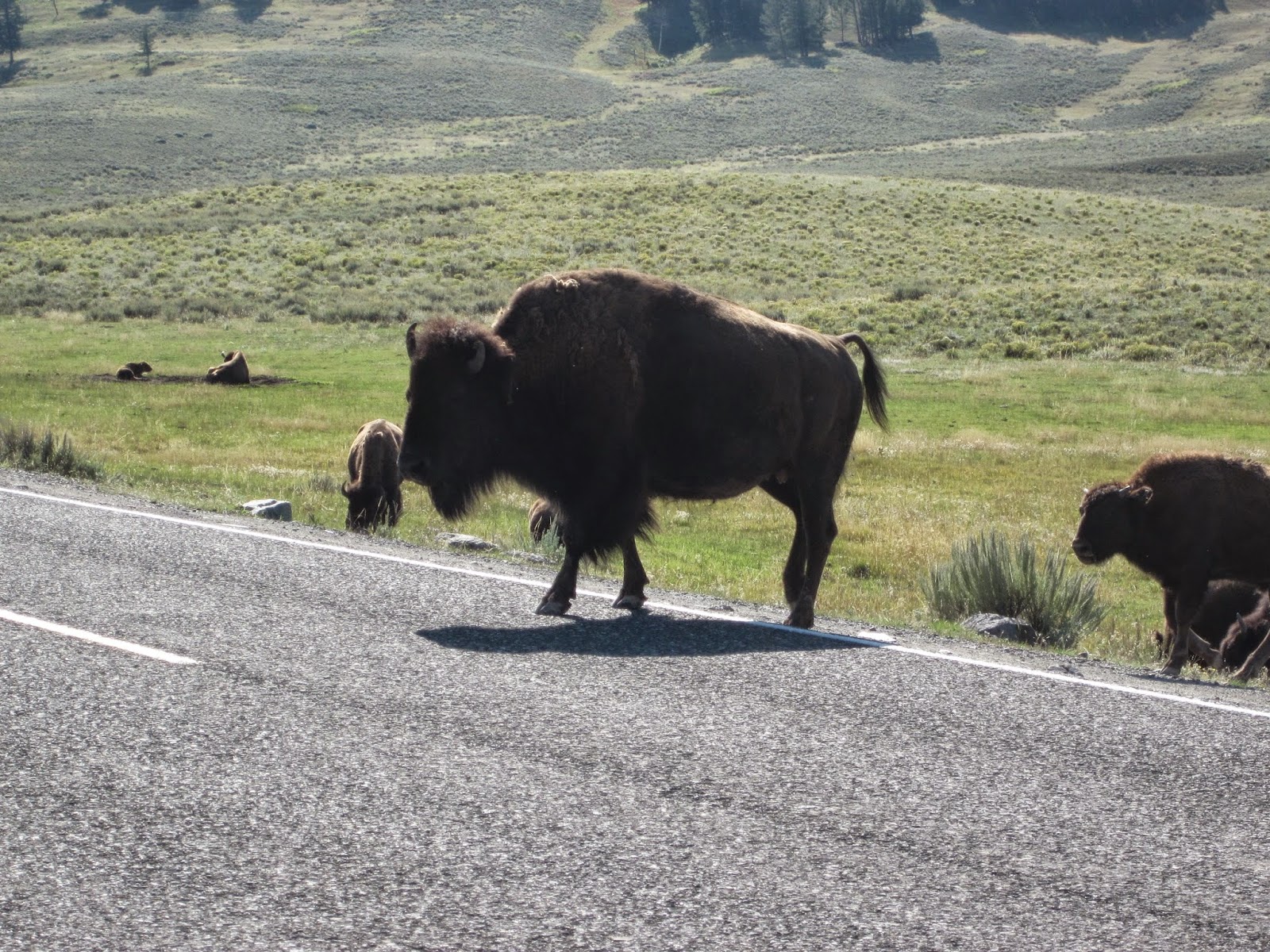 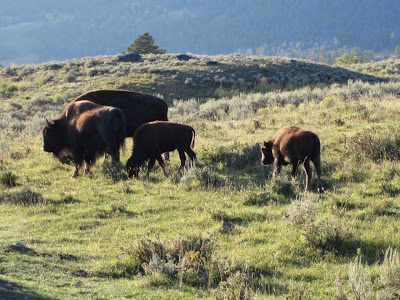 We returned to camp and Mrs. Tires took a nap while I went out for some ice and some intel on our next adventure. As I made my way, I noticed a rather large animal sitting cozy in the middle of a cluster of cabins. It was a full-grown male elk! He was enormous and had a full rack of horns. I froze in place and stared at the animal. I was in awe and wanted to appreciate the amazing creature that was so close to me. At the same time, these elk are very dangerous, so I couldn't linger too long. I took a few photos and watched some more, taking some comfort in the fact that he was sitting down and didn't look like he wanted to pick a fight. I later found out that they're just as dangerous when they're sitting down. Whoops again! I moved on after a few more photos, and noticed some staff members pointing to the the animal and talking into their radios. As I walked further away, more park staff members were arriving on the scene. Not sure how they did it, but they ushered him off the premises while I was at the visitor's center. Another top notch sighting, and another one Mrs. Tires missed. 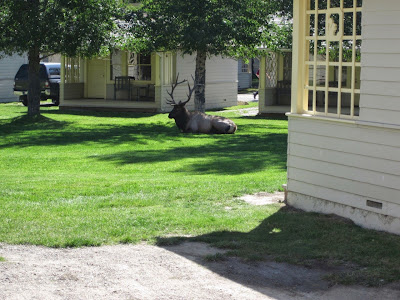 While in the visitor's center, I spoke to a ranger and got the latest report on our next adventure, a hike up Mt. Washburn. I had chosen this hike months ago. It's profiled in National Geographic as one of the best hikes in the country.

Among the items that drew us to this hike were the promise of mountain goats, wild flowers and a view of the Grand Tetons. We'd win Yellowstone bingo by seeing all three. The report was for fair weather, but windy and cold at the summit.

I grabbed some ice for the cooler and headed back to wake up Mrs. Tires, tell her about the elk and get us ready for our big hike. This hike was to be the burliest hike we've ventured on as a couple, a good 7+ miles. We had been working out on the StairMasters at the gym to prepare, but still, the "moderate to strenuous" label on this trail was intimidating. However, we had done pretty well hiking in the Badlands a couple of days earlier and our spirits were high, so we went for it.

After traversing the Northeast portion of the Grand Loop Road and gearing up, we hit the trail. The first leg was a real challenge, and we were out of breath and worried about what we'd gotten ourselves into. However about a mile in, the trail mellowed out. Phew! As we reached the flat part of the trail, we could see the peak of the mountain we were climbing. Here's Mrs. Tires pointing to our destination. We're headed towards the far peek, which is further away than the peak in the foreground and is actually taller (though it doesn't look so from this vantage point). 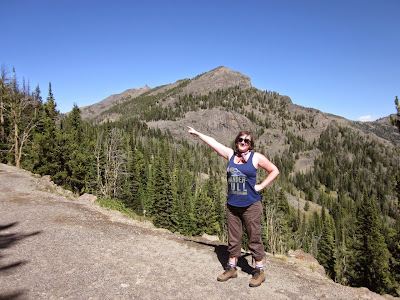 Our surroundings were beautiful. The trees and shrubs were distinct and peaceful, and the sunshine and physical activity kept us warm. There were indeed some really nice wildflowers, and the sky was blue and featured just a few fluffy clouds. 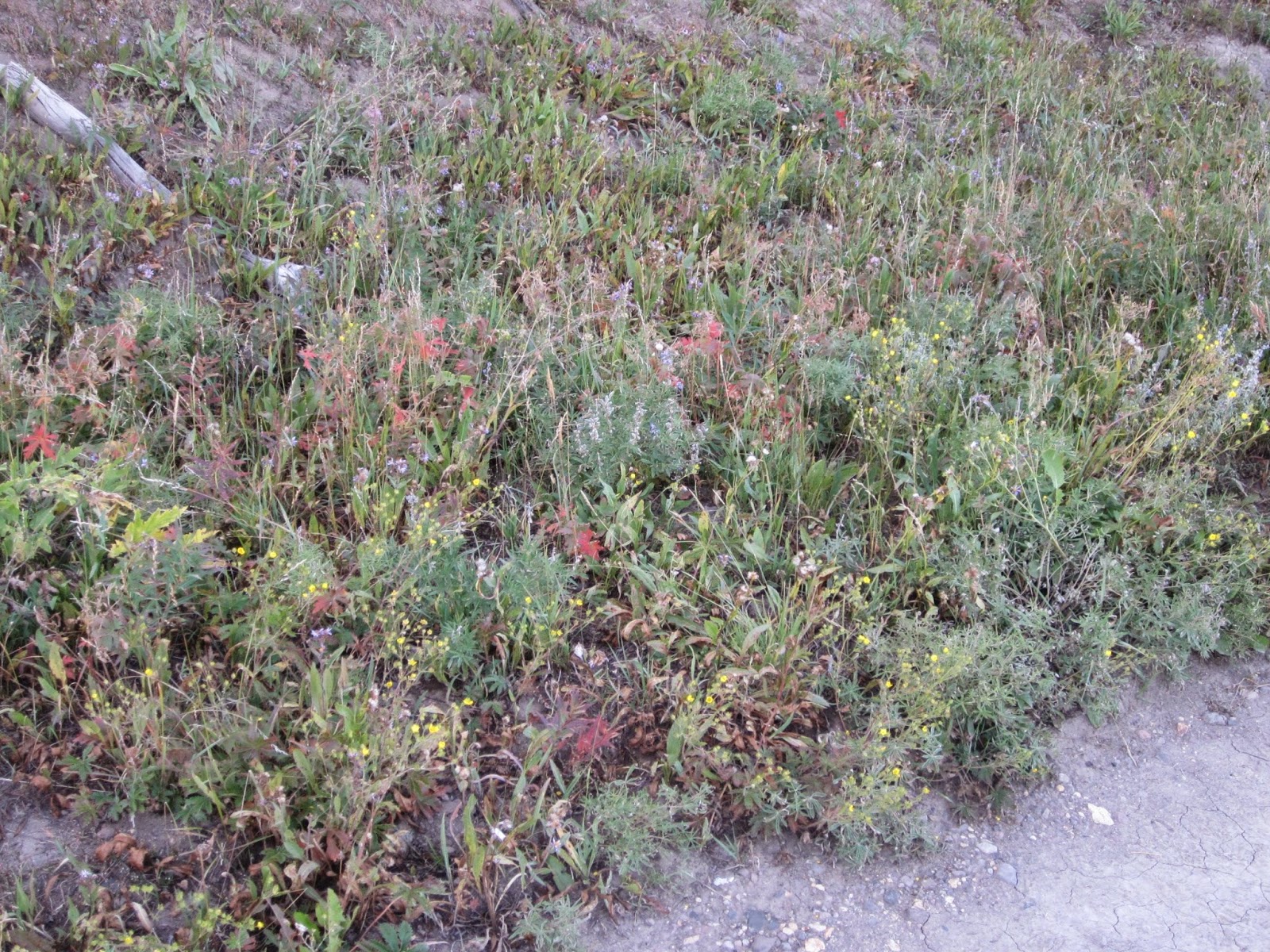 As we climbed higher, we entertained each other with a harmonica. We were in bear country, so all hikers are advised to make noise on the trail. Though neither of us actually play the harmonica, we did our best to cover songs or make up our own. Mrs. Tires actually got quite good! 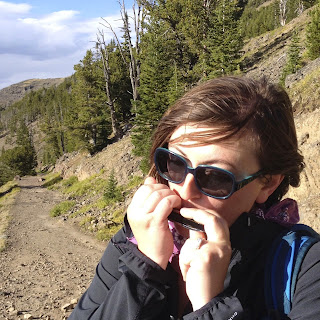 As we climbed higher we noticed a bunch of hikers stopped up ahead and looking in our direction. They were watching a herd of mountain goats that were making their way down the trail and coming right at us! We admired them and stood still, but got quite nervous as they continued to come closer. These goats aren't normally aggressive, but males can be to protect their family, and this pack included two smaller goats. We stayed as far away as possible, but this still meant sharing a leg of the trail with them. They walked within three feet of us to get by, even with us shoved off to the other edge of the trail. The male goat definitely gave us the stink eye as he passed. 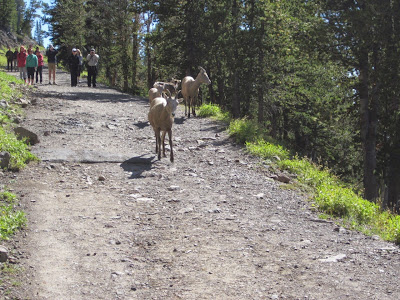 We took a few breaks along the way to have snacks and marvel at how far away the beginning of the trail looked. Eventually we made it to the top. The last half a mile was the toughest, as the trail was steep, and the wind was furious, whipping and whirling around in all directions. It definitely gave us Chicagoans a run for our money. We had to put all our layers back on and curse and grunt our way to the top. 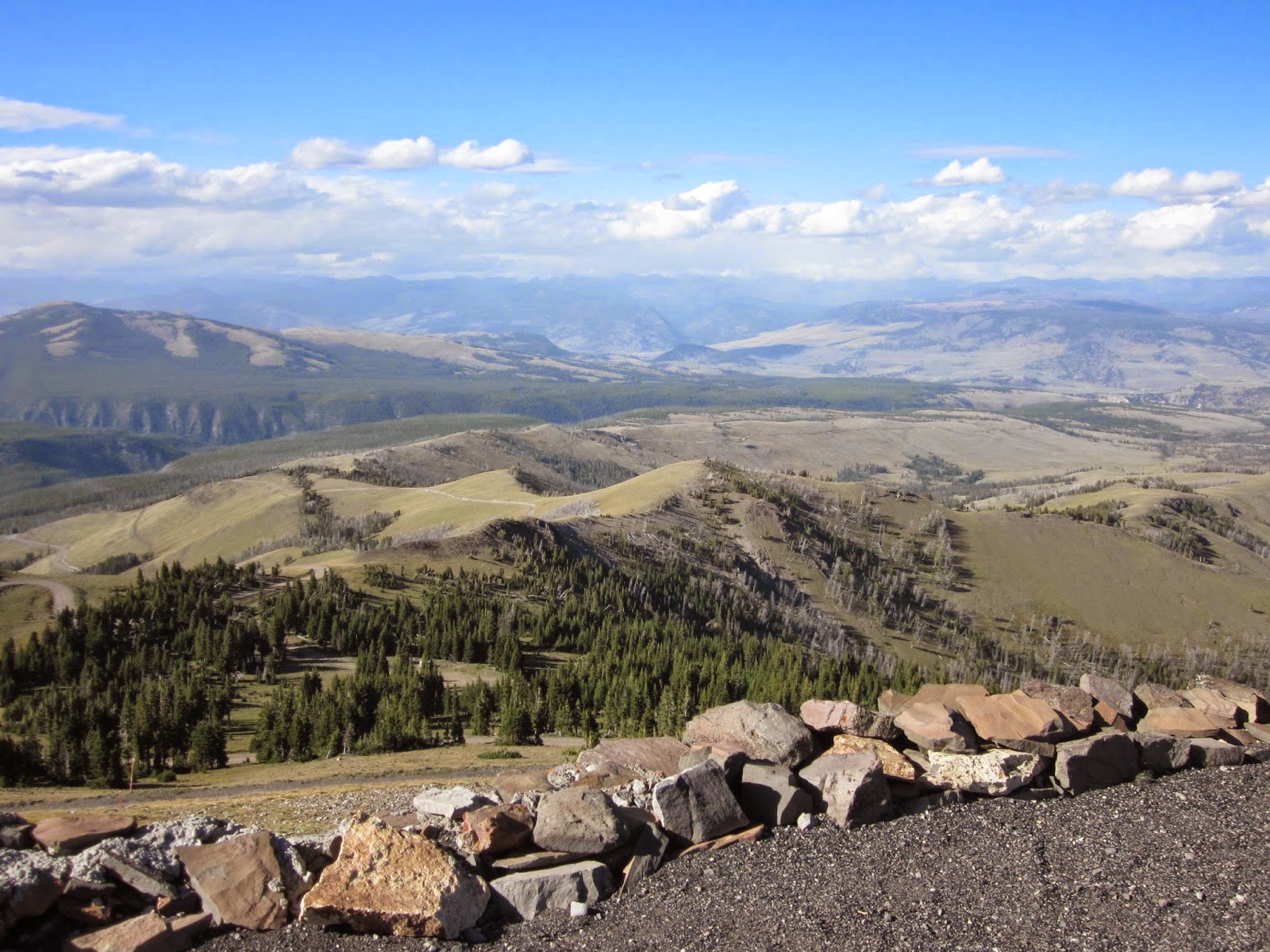 The look of exasperated joy in this photo perfectly exemplifies how we felt when we reached the station at the summit. 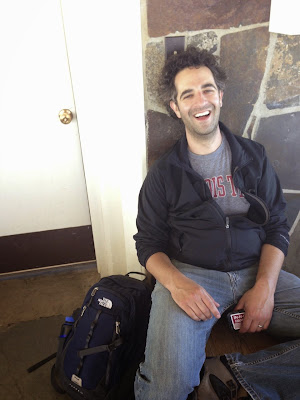 We sat in the lookout station at the top of the mountain for a half an hour, gawking at amazing views of the park that included the Grand Canyon of the Yellowstone and the Grand Tetons. We heard the tetons are amazing and were sad we couldn't work them into our trip, so seeing them from this vantage point was a nice consolation prize. Rested and rejuvenated, we geared up to go to the top of the station for the full 360 degree view. The scenery was truly amazing and will be engrained in my memory forever. If only it wasn't so windy. It was tough to enjoy the view for too long.

After another stop at the enclosed lookout center, we set off for our descent. 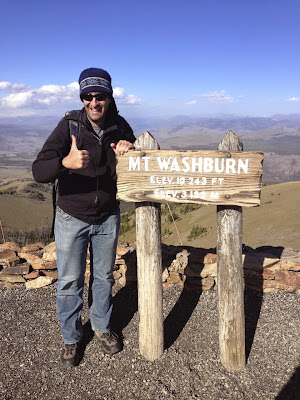 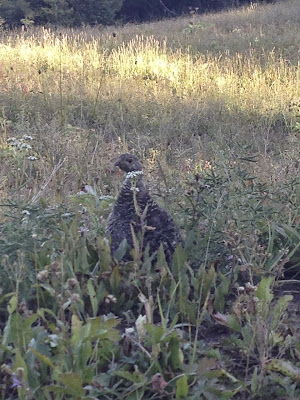 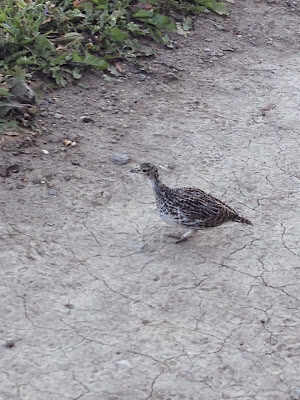 We made it back down without incident and with a strong sense of pride after rocking this burly hike. The drive back was a real chore, and we were already exhausted. Thankfully we weren't as far away from Mammoth this time and we had a shorter ride. Still very stressful, but nothing another buffalo burger and pint of Moose Drool couldn't fix.

The next morning we packed up and said goodbye to Yellowstone. We stopped in the gift shop on the way out and purchased, among other things, a Christmas ornament made out of bison poop and a pint glass with the logo of Yellowstone's Road Block lager, a nod to the phenomenon of bison clogging the roadways. Since we were getting the pint glass, we figured we had to get the beer as well. Two tall boys of that, please!

We made our way out through the north entrance, stopped in town to refill the cooler, and then cruised due north. After such an amazing two days in Yellowstone, I couldn't believe I was leaving this wonderful place and heading to yet another marvel - Glacier National Park. That story will be in the entry on Montana. Coming soon!