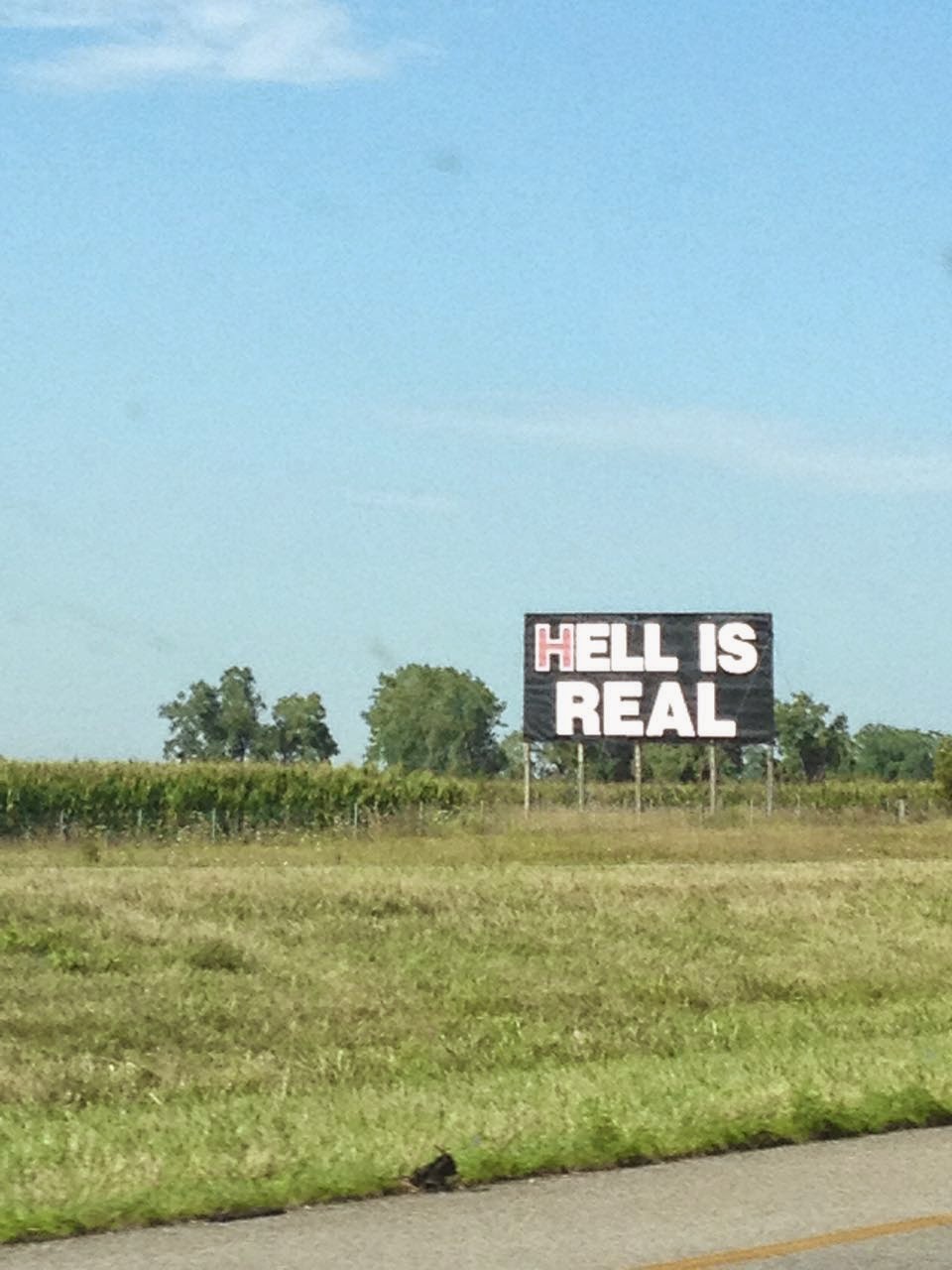 Ohio is the single worst state for road tripping. Hands down. No questions asked. No contest. Not even close (despite what I said about Indiana).

It all started with my first trip to the state in the spring of 2000. We were traveling to the University of Miami, Ohio with my sketch group, Casual Sketch. We stopped in the eastern part of the state for some dinner at Burger King. As I unwrapped my Whopper, I overheard a conversation between two old men next to me. "You know that commercial, 'Where's the beef?'" one asked the other as a half-eaten french fry fell out of his mouth. "I'll tell you who has the beef. It's those damn lying dirty democrats!" Political preferences aside, I couldn't help but laugh at this ridiculous non-sequitur.

After the meal, I got up to use the restroom. As I approached the lone stall, a man with his small son under his arm busted into the bathroom and said, "Hey buddy, my kid had a bit of an accident. Can we cut ahead of you?" Of course I obliged. They finished their business and exited. As I walked toward the stall for a second attempt, another man bursted into the bathroom, screaming child in tow. "Hey pal. Bit of an accident. Mind if we use this stall?" I noticed poop streaming down the boy's shorts. Again I obliged, and left. After the backwards old men and the apparent pants-shitting epidemic, I gave up on the bathroom, and on Ohio.

I've now criss-crossed Ohio a good ten or more times, and every pass-through has reinforced my opinion of the state. Several trips to visit family back in New England and a few to destinations within the state have resulted in multiple speeding tickets, bad traffic, treacherous storms, odd smells, endless construction, expensive tolls, unkept restrooms and long, boring drives. I tweeted my latest journey to the not-so-great state of Ohio with the hashtag #ohiosucks. Check that out on twitter and note the numerous participants. I am not alone on this!

Despite my strong anti-Ohio sentiment, I have had a few memorable trips there. An inspired road trip to Niagara Falls, Cleveland and Toronto with my high school friend Chris brought me to the Rock and Roll Hall of Fame for the first time. 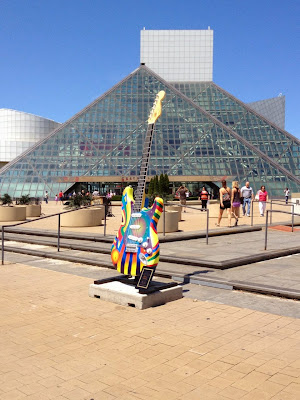 I am a huge fan of this place. The museum houses a plethora of rock and roll artifacts that will excite fans of any genre of music. One of my favorite exhibits is the collection of famous rock outfits, which includes the suits the Beatles wore on the cover of Sgt. Pepper’s, David Bowie’s Ziggy Stardust outfit, Michael Jackson’s jacket from Thriller and even George Clinton’s slippers.

Nothing at the Rock Hall tops the displays of musicians' notebooks with drafts of famous songs written in them. It's fascinating to see the first incarnation of a famous hit in the artist’s real handwriting, complete with scribbles and side notes left during the writing process. These documents have so much life to them, and they stir up true emotions, especially when stumbling upon songs that already hold special meaning. It's worth enduring Ohio's nuances for those alone. I also have a vivid memory of Chris and I sharing a pair of headphones for an hour as we rocked tunes from the Rock Hall's list of the 500 greatest rock and roll songs of all time.


Our wanderings eventually brought us to Euclid Ave, a fancy part of town not far from Progressive Field. The highlight there was a meal at the Greenhouse Tavern that included foie gras steamed clams. 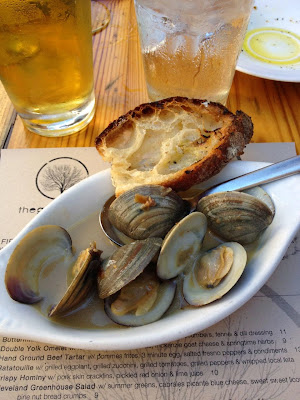 We also got quite a bit of amusement out of meeting a busboy that looked like a younger version of Matt.


With our bellies full, it was time to head to Progressive Field, home of the Cleveland Indians. Progressive is a fun but flawed stadium. The playing field is seventeen feet below sea level, which gives the stadium an intimate feel, and its downtown location adds a nice backdrop. However, several minor annoyances added up. The stadium was hard to navigate. Long railings made it hard to get to your seats without colliding with other fans. No cup holders in the seats. Fans were unspirited. Row numbers would skip a numeral or two for no reason. Not such big deals in and of themselves, but when you look at them as a whole, you realize that Progressive is in the "good-but-not-great" tier of baseball stadiums. 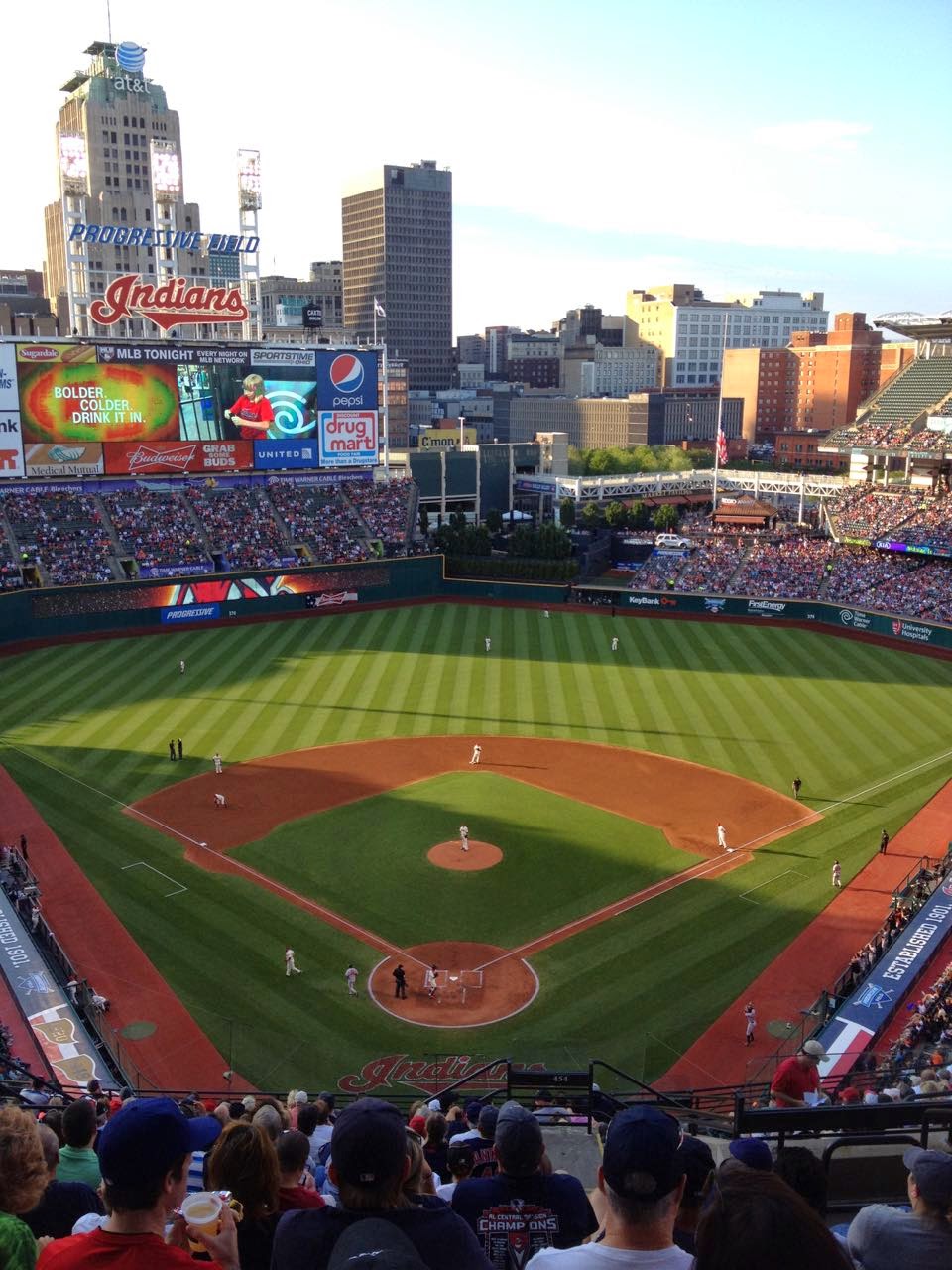 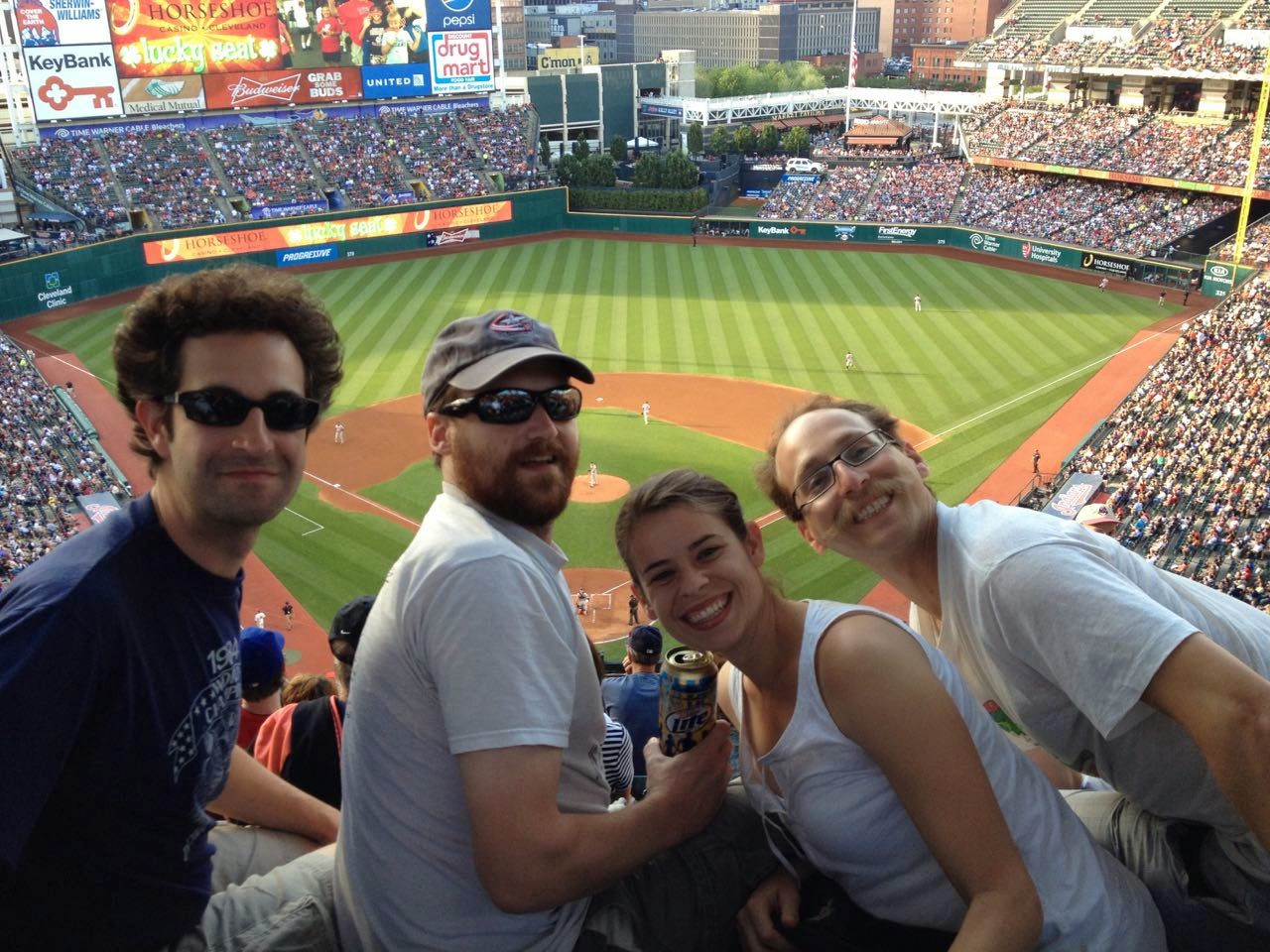 There was one feature of Progressive Field that out-shined all other stadiums: the post-game fireworks. Many stadiums feature fireworks, but this show went above and beyond your normal crackle and boom. It was Beatles-themed, so the fireworks exploded in sync with many fantastic Beatles songs. A trippy custom-animated video accompanied each song. Fireworks were launched from not only behind the outfield wall, but from field level and the top perimeter of the stadium. As if that wasn't enough, they added a coordinated laser light show. The fireworks went on for a good half an hour, and I loved every second of it. If you go, be sure to go on fireworks night. It's worth the price of the ticket for that alone.

Matt and I said goodbye to John and Leah the next morning and made the four hour journey from Cleveland to Cincinnati for a day game at Great American Ball Park, home of the Cincinnati Reds. The drive was both care-free and cop-free, both rarities for drives through Ohio.

When we arrived in Cincinnati it was blazing hot, somewhere in the upper-90s. We arrived early and had some time to kill before the game, and we noticed a nearby bridge that stretched over the Ohio river. Turns out the bridge was a pedestrian bridge to Kentucky. We had been in Ohio for a good day and a half and jumped at the chance to leave its clutches, if only for a few minutes. It felt about ten degrees cooler on the Kentucky side of the bridge, so I’m blaming Ohio for the unbearable heat, too. Apparently it’s also cheaper to park in Kentucky and walk across state lines to the game. 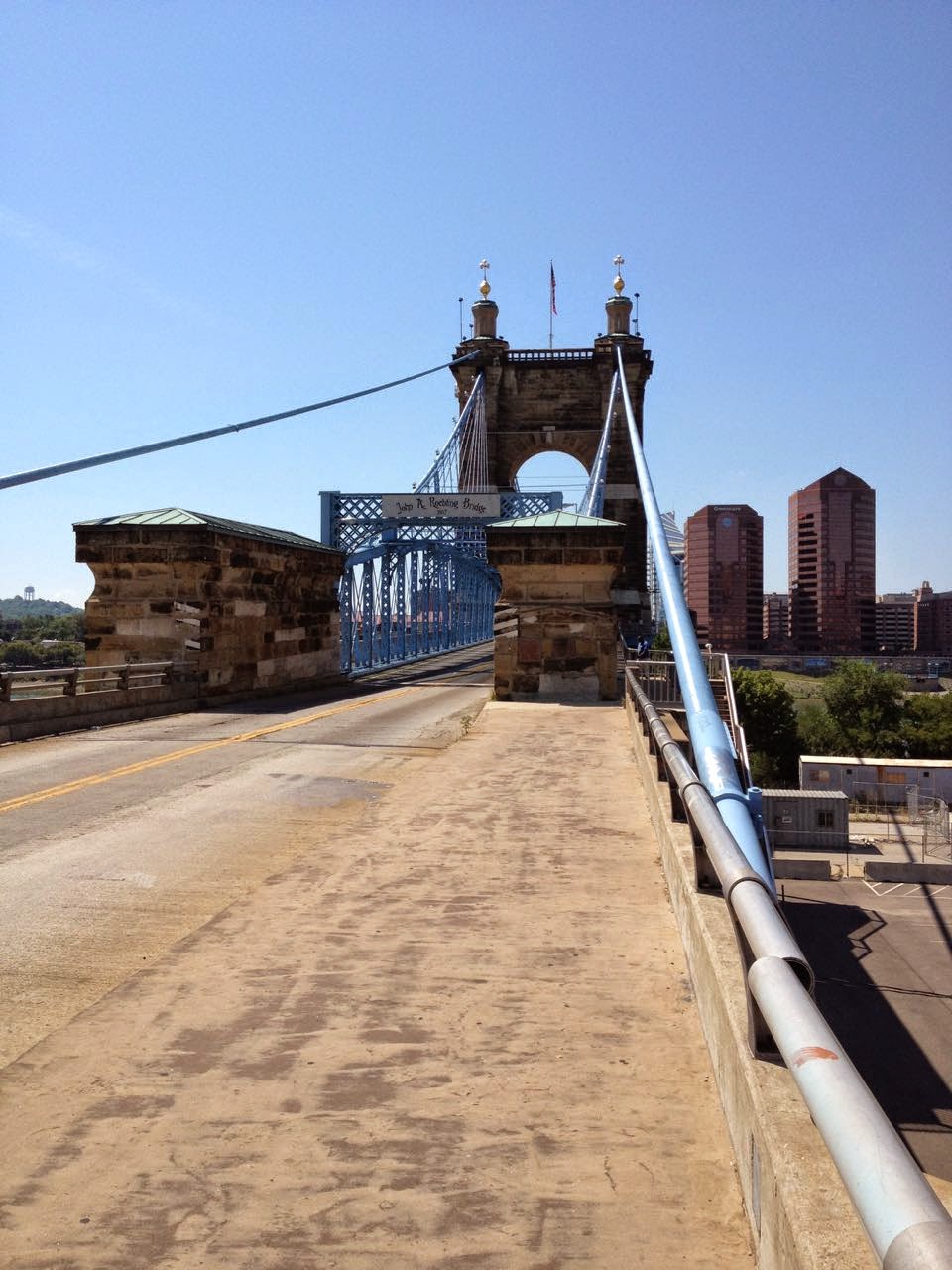 With that out of our system, we ventured into the stadium. Great American Ball Park is a real gem. I was delighted by its Mark Twain vibe, which is hammered home by its steamboat theme. The stadium features a giant boat propeller near the entrance, a replica steamboat (which is actually a fancy restaurant) in center field, and two smokestacks in right center that blow flames to celebrate home runs. 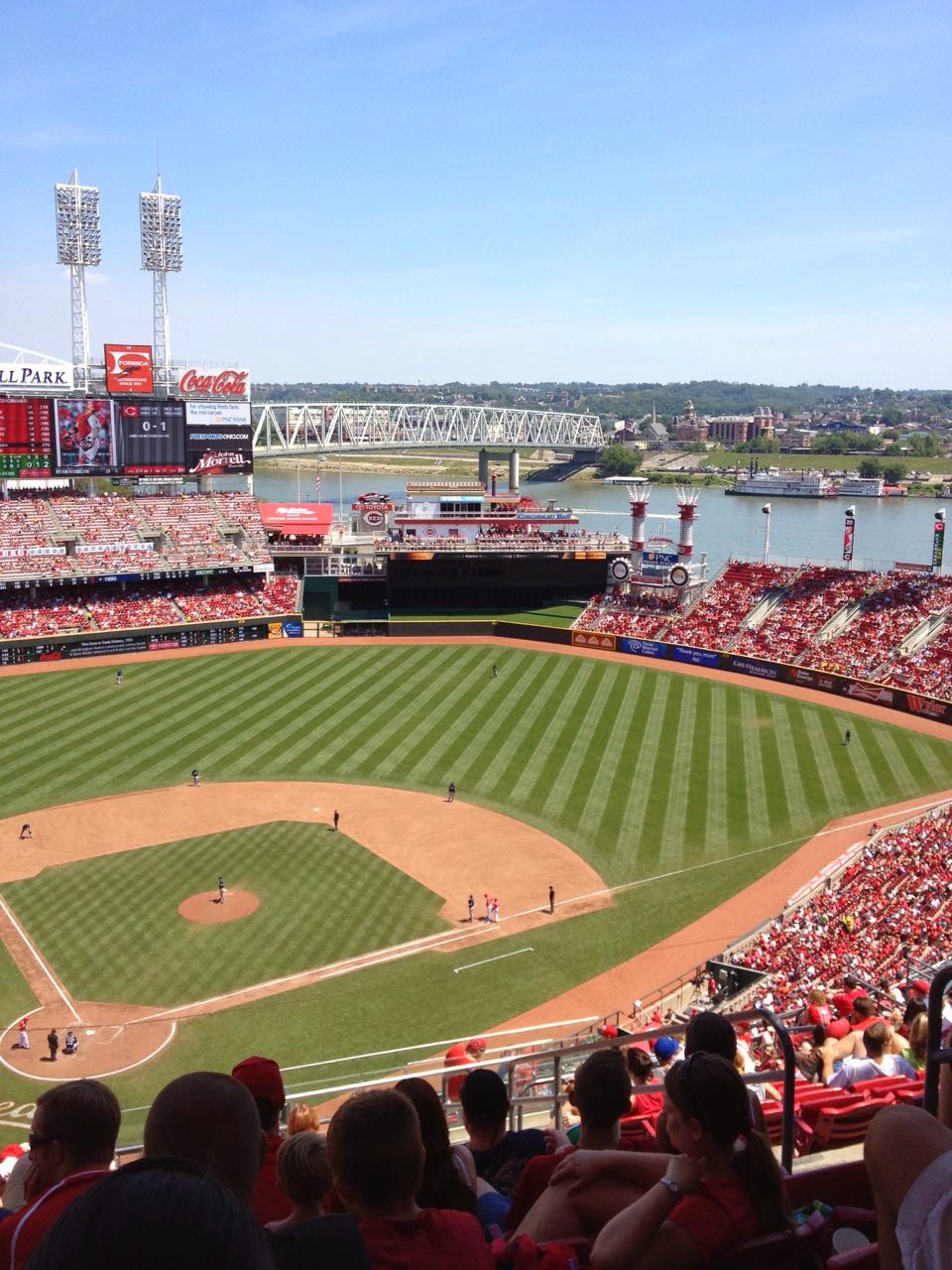 It also offers many down-home amenities that fit the theme perfectly, including the world’s largest selection of slushy flavors and a general store with wood paneling that sells huge beers in huge koozies. 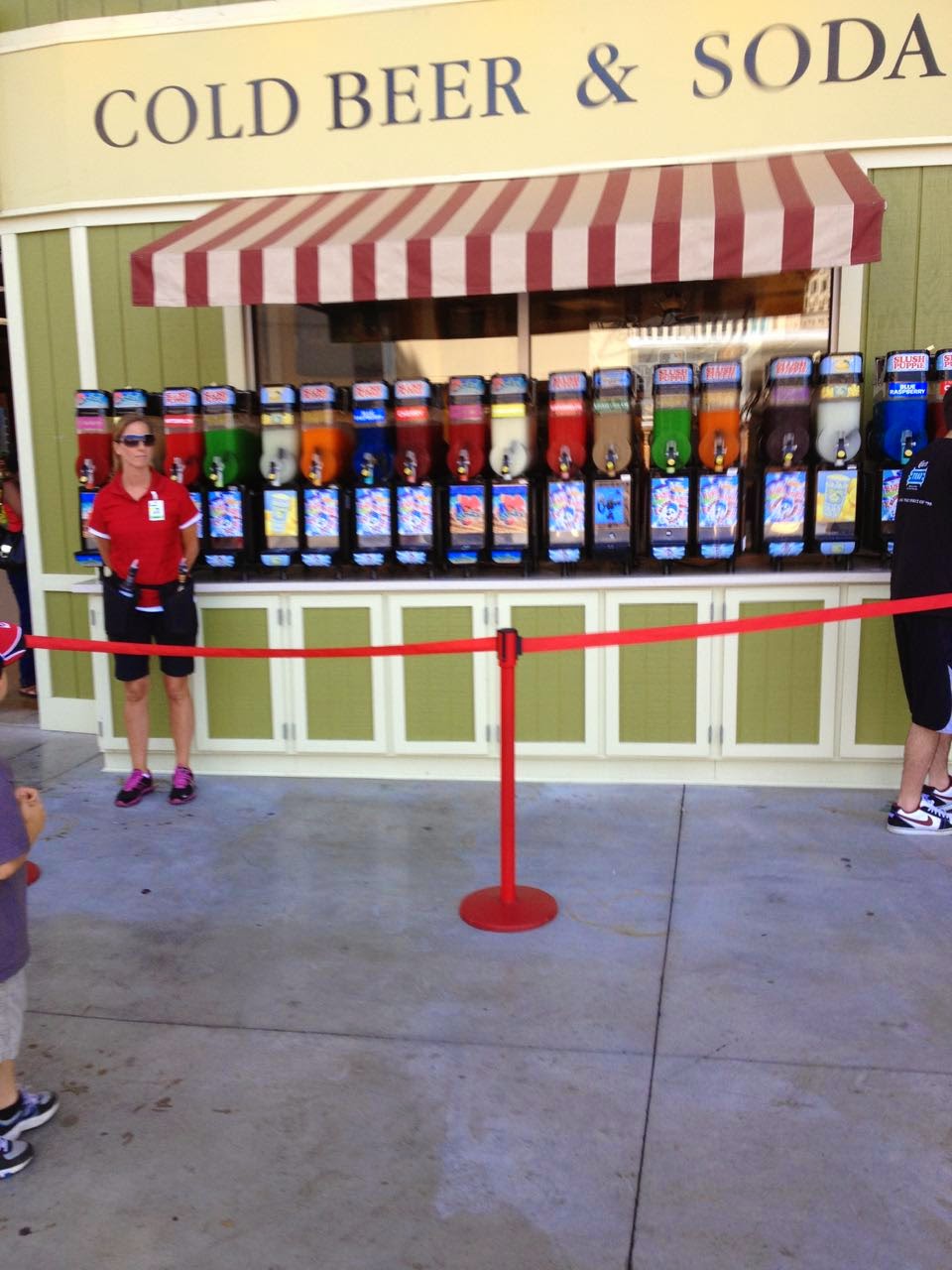 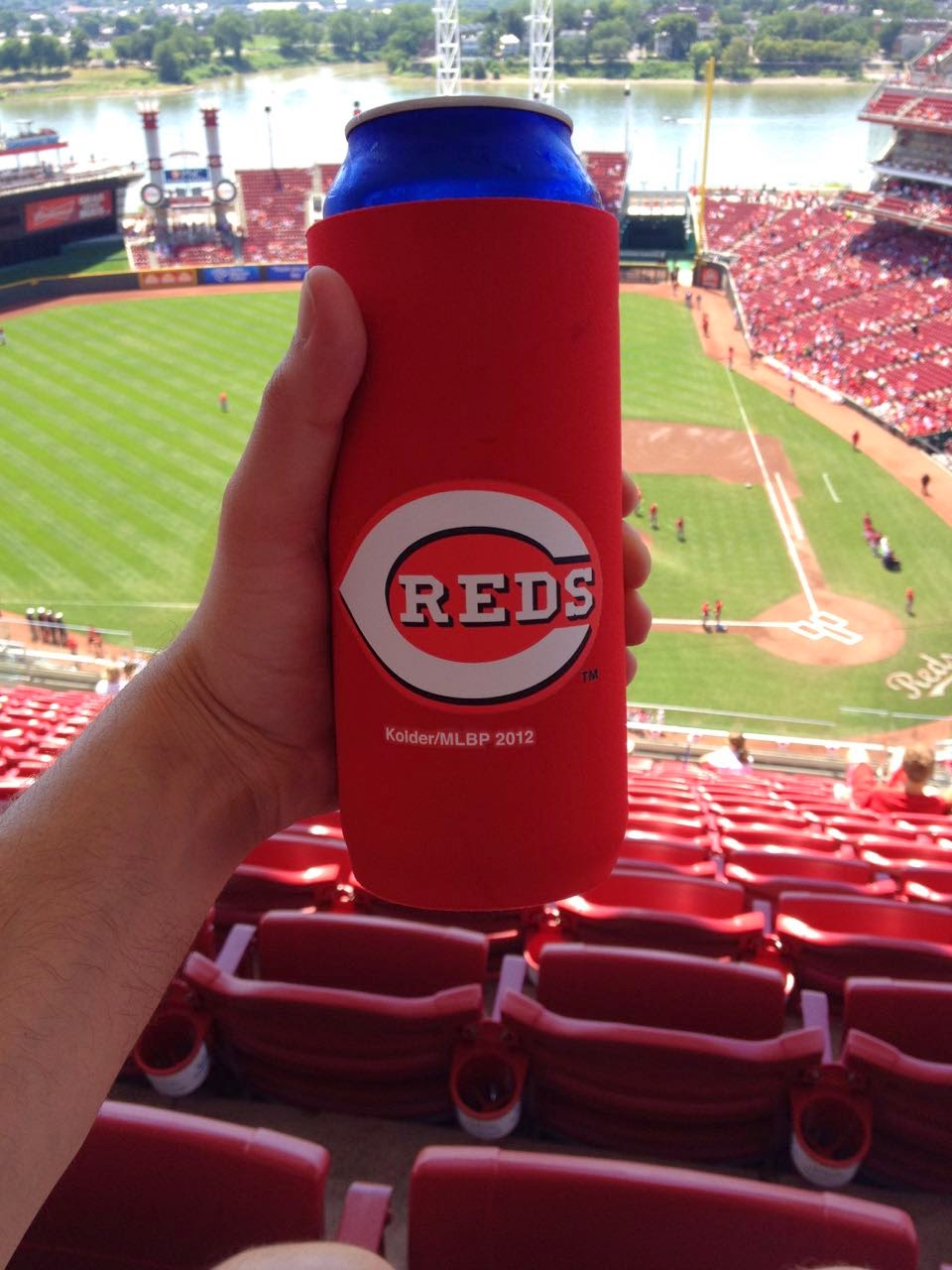 The beer selection was great throughout the ballpark, and they had an in-stadium bar, which was handy because we needed their AC to save us from the heat. The air conditioned gift shop was also a nice break.

It’s also worth noting that the tickets to Great America Ball Park are very affordable. For less than the cost of our nosebleed seats in Cleveland, we scored seats about twenty rows from the field and just a couple of sections from home plate. The only complaints I have about this park are minor. The aforementioned replica steamboat restaurant blocks fans from making a complete loop around the stadium, which is a sacred part of the stadium chasing experience. The other small flaw was that there’s a Reds Hall of Fame that’s part of the stadium, but it’s ten dollars extra to get in. The Royals, Mets and Mariners each have a hall of fame in their stadium, but they’re included in the admission price. I tried to talk our way in for free, but no dice, so we skipped it on principle. Looking back, I should have just forked over the ten bucks.

Overall I was delighted by Great American Ball Park. I’m surprised it’s not more highly regarded among stadium enthusiasts. For me it’s a top five stadium.

When one considers the Rock and Roll Hall of Fame the baseball stadiums, it becomes apparent that there are some great things to do in this state. That doesn't change the fact that #ohiosucks.

Must see in Ohio:


- The rest of the state

Oriole Park at Camden Yards
Posted by Unknown at 9:09 PM