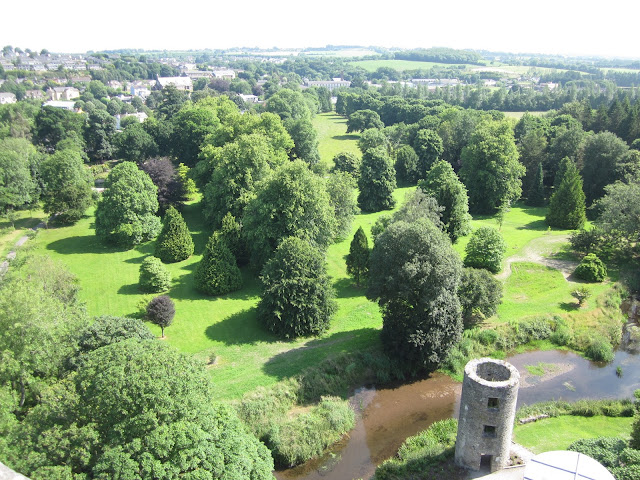 Our Great Irish Road Trip was in full swing when we woke up in Cork. After a day in Dublin, two days in Galway, and a day checking out the Cliffs of Moher and the Dingle Peninsula, we arrived in Cork sometime past midnight the night before. Despite the late arrival, we woke up early, ready for another jam-packed day of in Ireland.

Our morning started with a wonderful Irish breakfast, courtesy of Breeta, the owner of the Higgins B&B. We chowed down on eggs, sausage, beans, toast, tomatoes, cheese and coffee while we chatted with Breeta and a German guest who insisted on drinking Guinness with breakfast. 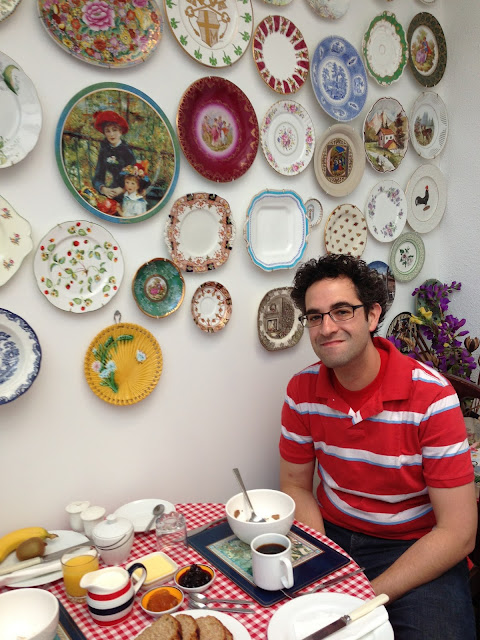 With our stomachs full, we hopped back into the car and headed to Blarney Castle, one of the most anticipated stops on our journey. We successfully arrived right at 9:00 AM, a full hour before the tour busses showed up, meaning we beat the crowds. We marched towards the castle with the hope of getting some time at the Blarney Stone, the castle’s signature feature. According to legend, kissing this stone grants the visitor “blarney,” which is essentially the gift of gab. 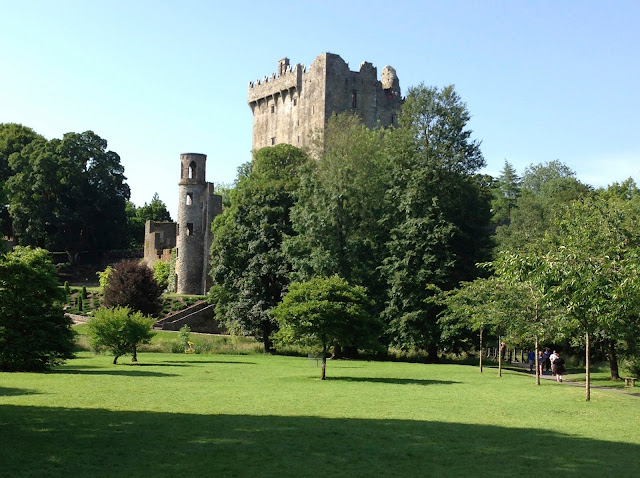 The process of kissing the Blarney Stone was quite involved. We entered the castle, wove our way through its narrow passageways and hiked a series of tight steps. 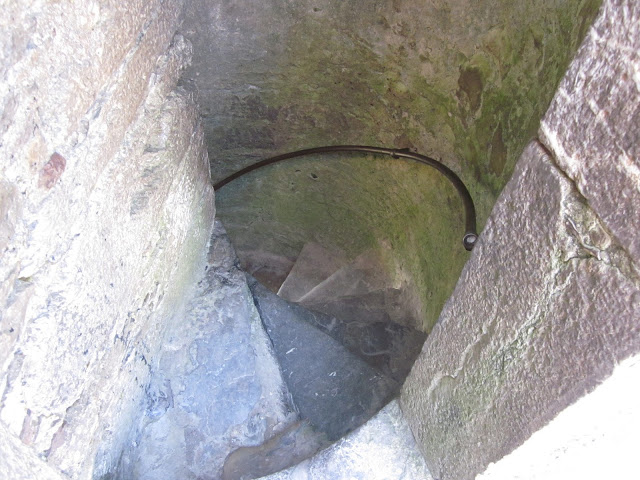 Eventually, we reached the top of the castle, where we encountered a line that wrapped around the perimeter of the roof. 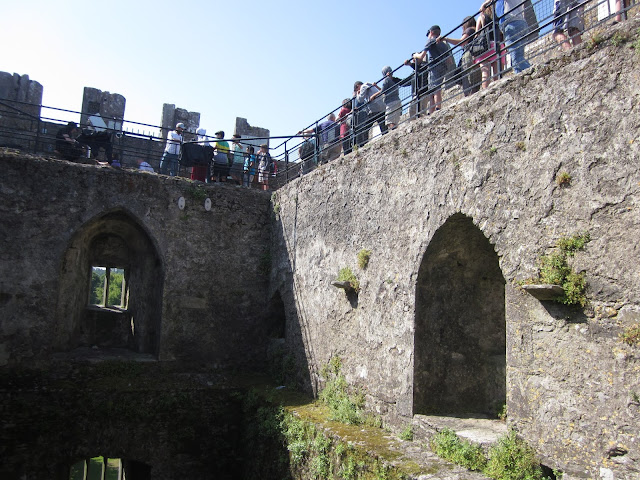 It took us about 20 minutes to get through the line - not too bad a wait considering a 2+ hour wait is common. We didn’t mind waiting, as the castle’s features were fascinating, and we encountered great views of the expansive and beautiful surrounding area. 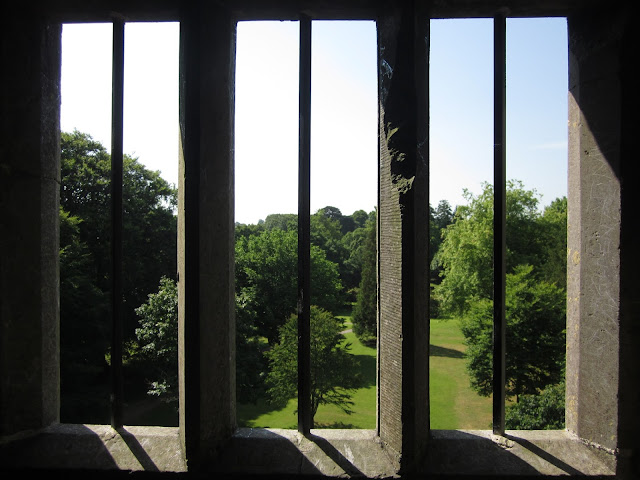 The Blarney Stone was located below the level of the floor, so a couple of castle staff members were situated there to help visitors deliver their smooch. Mrs. Tires went first. The attendant supported her as she laid on her back, grabbed the support bars and extended her neck. The other staff member snapped her photo while she puckered up and kissed the stone. 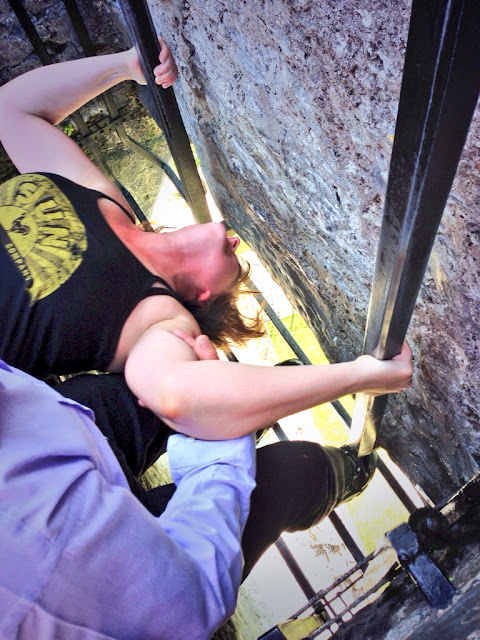 I followed suit and gave the stone a big, juicy kiss. During this process, we both conveniently ignored the rumor about the staff routinely pissing on the stone during off-hours. 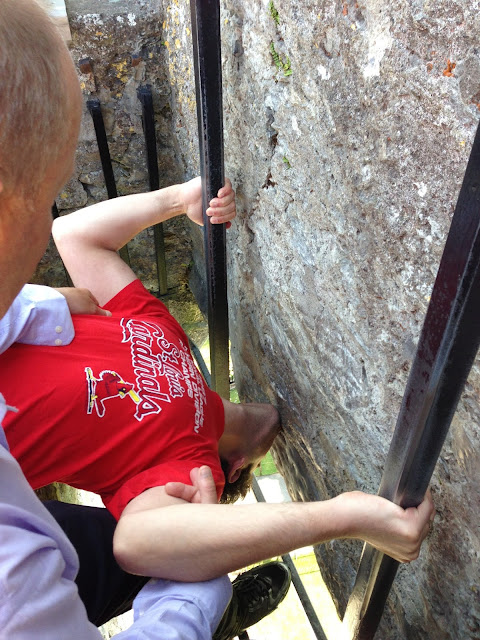 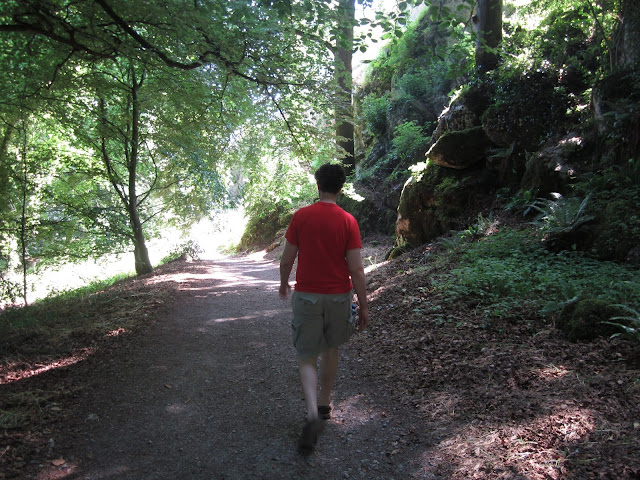 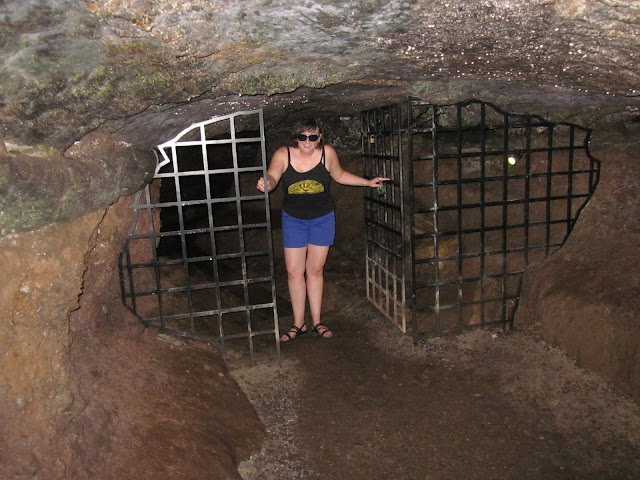 We were drawn to the Poison Garden, an eclectic collection of plants that were poisonous. Some plants had signs warning visitors not to touch, eat, or even smell them because of the various ailments the poisons could cause. 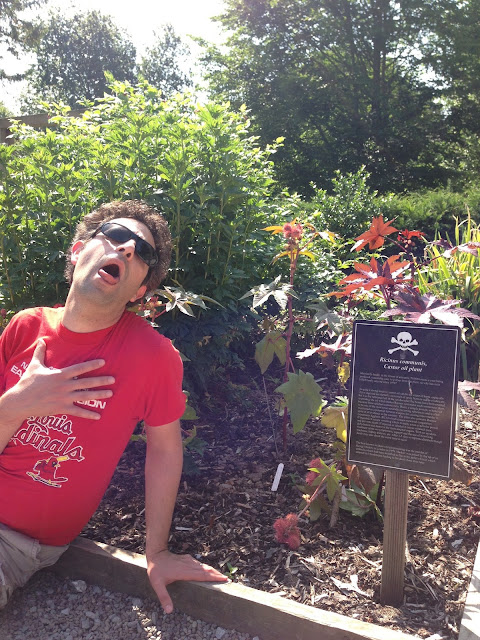 No plant was more heavily guarded than the lethally dangerous marijuana plant. 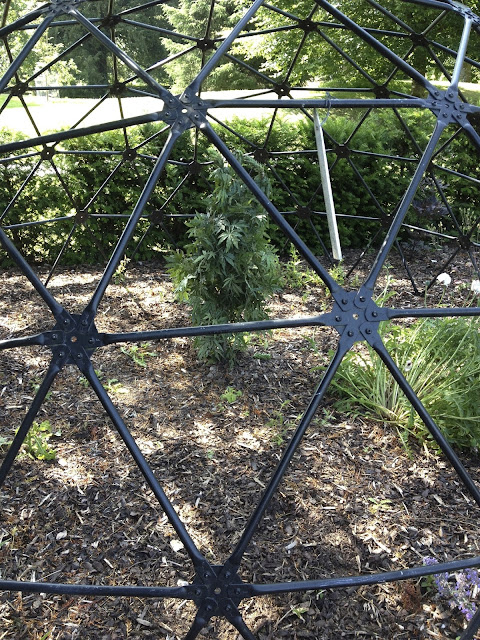 We also visited Badger’s Cave, where Mrs. Tires did her best Gollum impression. 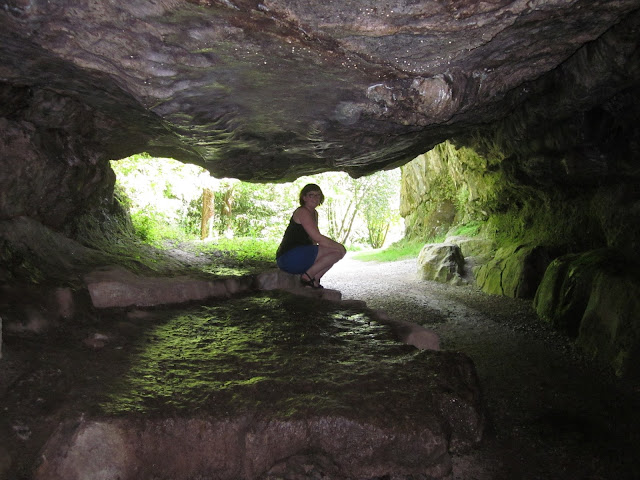 In lock step with an unfortunate reality of our fast-paced road trip, we didn’t have as much time as we would have liked to explore the grounds around the castle. Nonetheless, Blarney Castle was a lot of fun to explore, and it far exceeded our expectations. We were sad to leave.

We had a date with some of Leanne’s relatives, so we headed towards Carrigaline, a small town about an hour outside of Cork. Pete and Jenny O’Leary resided in Carrigaline…or at least they used to. They had long since passed, and we were going to see if we could find any trace of them in this small Irish town. 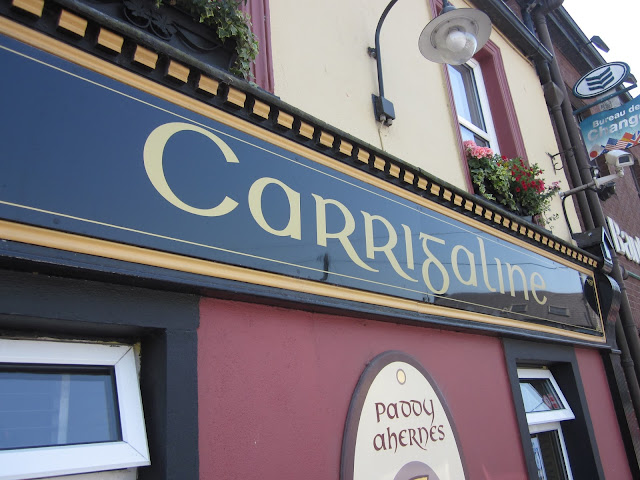 Upon arriving in Carrigaline, its charm impressed us right away. Many of the destinations on our Great Irish Road Trip were rather touristy, so in comparison, this town seemed more authentic, and it was clean, comfortable and welcoming. We parked and strolled down the main drag, not exactly sure what we were looking for. The town bookstore seemed like a good place to start, so we went there and chatted with the shop owner about our search. She half laughed at us as she delivered some unfortunate but totally logical news - there were hundreds of O’Learys who resided in the area, and our chances of tracking down Pete and Jenny were pretty slim. She did, however, provide a couple of relevant clues. She advised us to visit the town church, which had more extensive records than we’d find in the bookstore. More importantly, since Pete and Jenny owned a farm, it was likely that the farm was on Kilmoney road with all the other farms in town.

We found the church and entered, hoping to find someone who could help. The stately and ornate church was impressive, but no one was home. 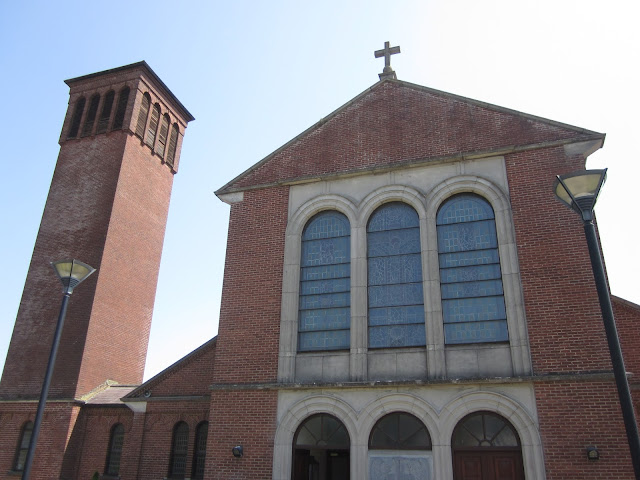 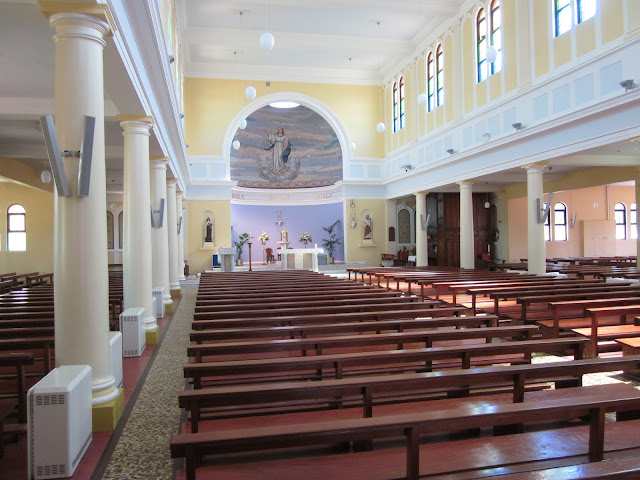 We had a similar experience when we went to the Carrigaline Library, which was closed for lunch. Disappointed but still upbeat, we grabbed a bite at a local grocery store and had a beer at a nearby pub before settling for a cruise down Kilmoney road, the closest we’d get to tracing Mrs. Tires’ Irish heritage. 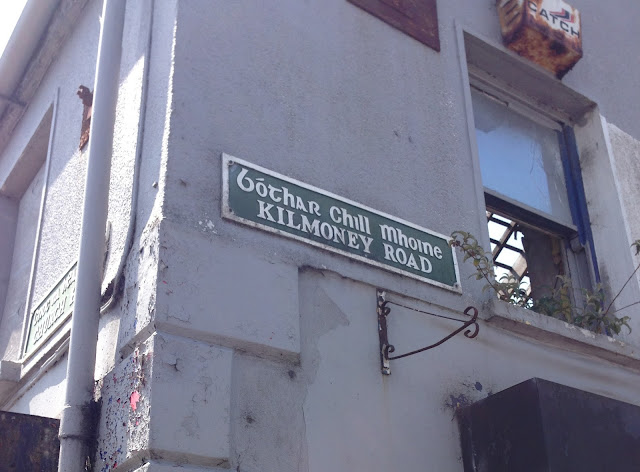 Rolling fields flanked the road, one of which must’ve been Pete and Jenny’s farm back in the day. We tried to imagine visiting said farm and meeting her relatives, an amusing exercise that enhanced the experience. 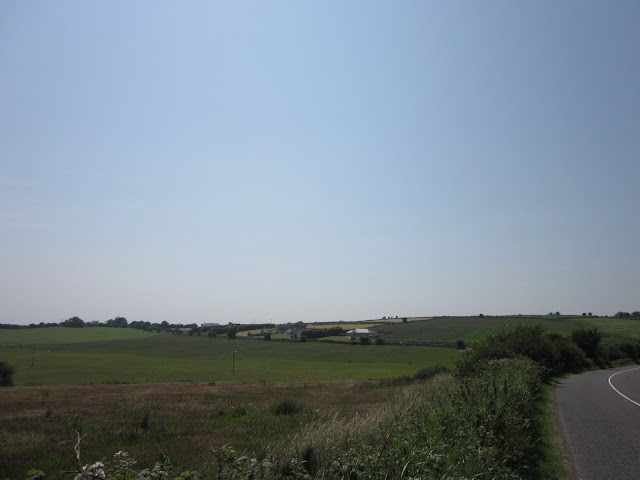 Ultimately we didn’t find whatever it was we were looking for, but we did get to check out the town Mrs. Tires’ relatives lived in, and that was good enough for us.

On our way back to Cork, we followed Breeta’s recommendation and stopped in the seaside town of Kinsale. After struggling to find parking for a time period roughly equal to the rest of our time in the town, we strolled along the waterfront marveling at the docks, which seemingly went on for miles. From there, we found a seaside restaurant, where we devoured a plate of oysters and enjoyed a couple of tasty Irish beverages. After a quick stop in a gift shop, we were on the road again, headed back to Cork. 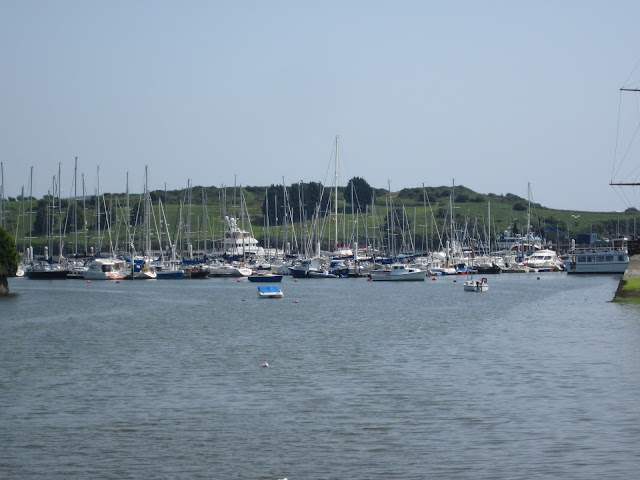 After a much-needed nap back at the B&B, we changed and got ready to go out for the evening. All of the driving around left us just one evening to visit downtown Cork, and in true Rayman fashion, we intended to make the most of it.

We started our evening at Sin É, a pub loaded with character and known for live music, delicious stouts, and an eclectic mix of decorations. The music, literature, and sports-inspired decor covered the walls and the ceiling, and made staring at the walls an exciting and surprising experience. The whole vibe of the place was brought together by tables lit by candlelight coming from wine and whiskey bottles turned candlestick holders. We sat at the bar initially, where we talked to a friendly regular of the pub. He recommended we go to St. Anne’s Church, where tourists are invited to ring the gigantic Bells of Shandon at the top. Unfortunately, our schedule didn’t allow for it, so that’s another destination for the Next Time list. We spent the second half of our time at Sin É sitting at a small table tucked away in the corner of the bar, where we enjoyed some whiskey and beer and toasted our time in Cork. 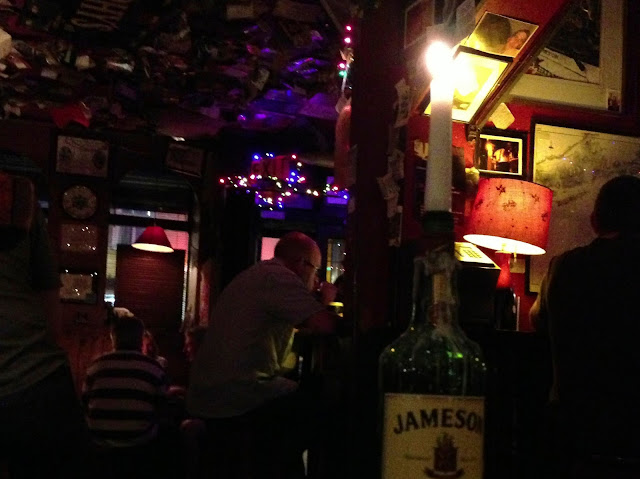 We could have spent all evening at Sin É, but we had reservations at Greene’s, a fancy restaurant famous for fresh, inventive food and a secluded outdoor seating area accented by an actual waterfall. Mrs. Tires made our reservations well in advance of our stay, which afforded us a seat on the romantic outdoor patio. We enjoyed a wonderful bottle of wine, and I had the Skeaganore Duck, which was easily the finest duck I had ever eaten. As nightfall crept in, the restaurant lit the waterfall with colored lightbulbs, which added to the allure. 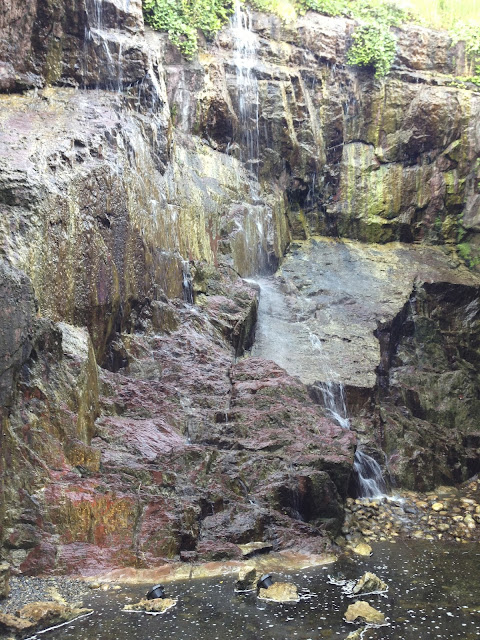 We were going strong after our delicious meal, so we sought out some nightlife in downtown Cork. It was Monday night, so the town was pretty quiet, but we didn’t let that deter us. After closing down a bar that shut its doors at 11:00, we sought out a late-night establishment, which was unexpectedly hard to find. Fortunately, we stumbled upon the Old Oak Pub, a huge, soccer-obsessed pub that was not only open late, but also offered karaoke. Mrs. Tires and I love the stage, and we rarely pass up the opportunity to get behind a microphone and belt out a tune. Only a couple of people had put in songs by the time we made our song selections, and we feared our karaoke experience would be a dud. Nonetheless, when our names were called, we went up and give it our all. I sang Can’t Take My Eyes off of You by Frankie Valli and the Four Seasons, and it was one of my best performances ever. The crowd cheered like crazy when I left the stage. 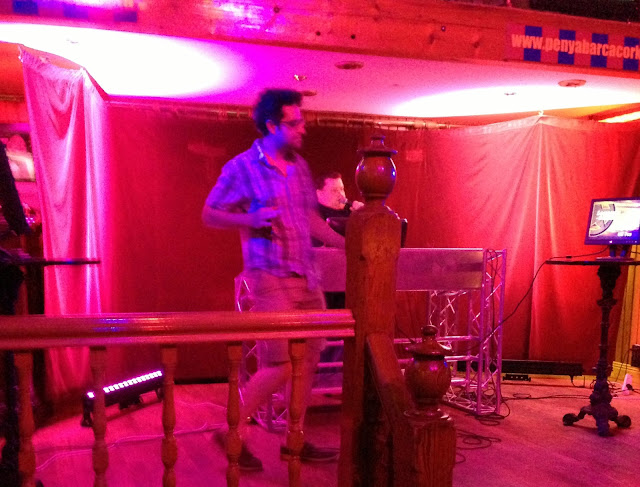 Not to be outdone, Mrs. Tires belted out an amazing rendition of the Beatles’ Oh, Darling, which was met by equally enthusiastic whooping and applause. 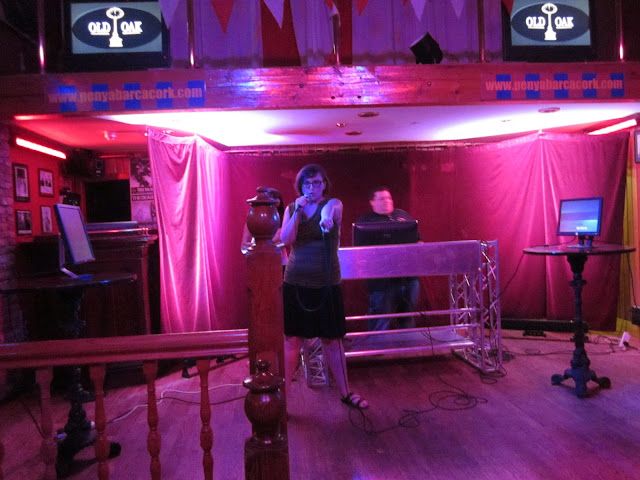 As soon as Mrs. Tires sat back down, our server approached with a round of drinks on the house because of our performances. It was the first and only time our singing produced free beer. I couldn’t believe it.

The karaoke enthusiasts came out of the woodwork after our performances, and we were treated to some fantastic karaoke. It was an outstanding evening that left us walking five feet off the ground when we made it back to our B&B.

After another delightful breakfast the next morning, we were on the road for the final full day of our stay in Ireland. We couldn’t take the radio anymore, so we bought some discount CDs at a gas station and rocked out to them while we drove back to Dublin. After a smooth and pleasant cruise, we were assessing our lunch options when we saw a sign for the Rock of Cashel. Breeta recommended we stop off at this Irish castle. We weren't entirely sold on a visit, but with lunch in mind, we took the exit.

We planned to poke our heads into the Rock of Caschel and see if it was alluring enough to check out further before fully committing. We walked in the front door to a room overlooking the castle's courtyard, but the view didn't sell it well. Still unsure, we took a few steps into the courtyard for more, and upon looking back, we realized we walked right by the cashier and had actually inadvertently snuck in without paying. Whoops! Since we no longer had cost as a barrier, we rocked the Cashel. 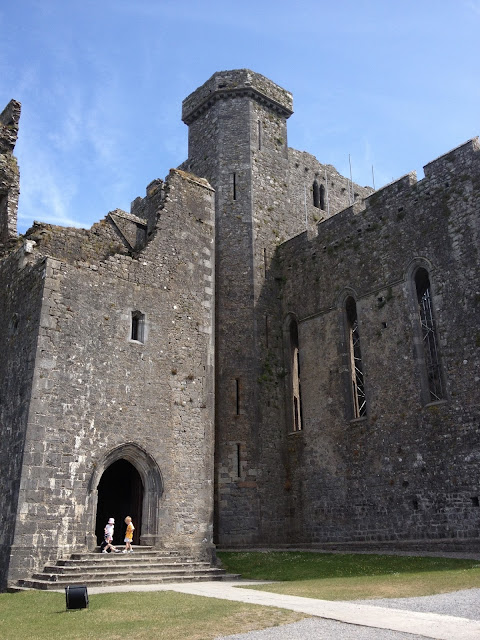 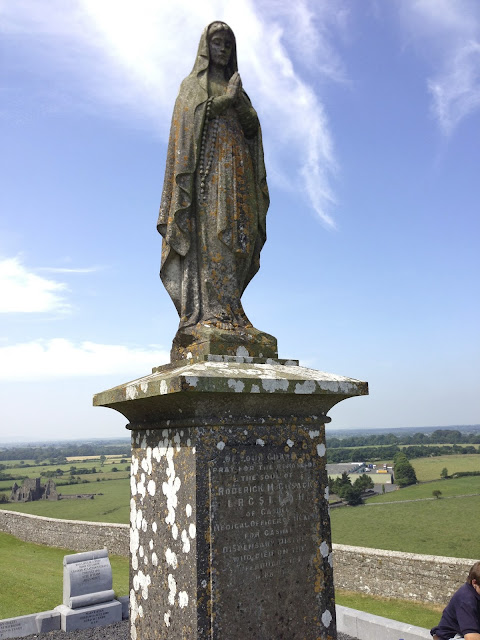 This castle was scenic and sported some intriguing installations, but didn’t live up to the castles we visited previously, and we didn’t connect with it. Besides, we’d be staying in a castle that night, or rather a castle-turned-hotel. The hotel is described in the post on Dublin, and it perfectly capped our Great Irish Road Trip.

Ireland was a wonderful country to explore. The fields were as green and lush as we had imagined, the people were as welcoming as we had hoped, and the beverages were delicious. We got everything we wanted out of our trip, and we’d gladly go back again.

For more on Ireland check out: 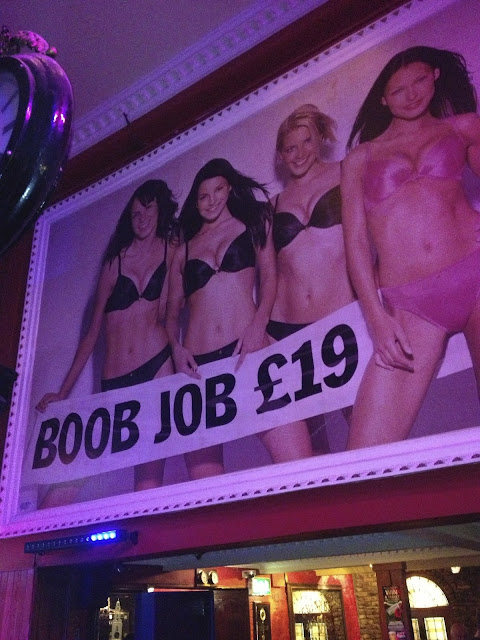