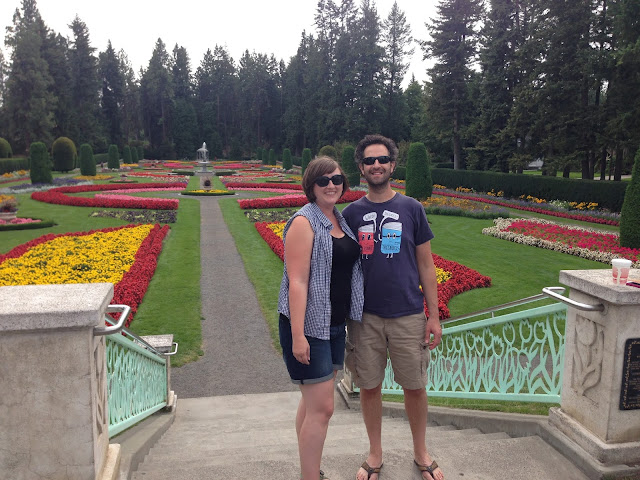 Enormous waterfalls, famous diners and gardens straight out of Alice in Wonderland highlighted my time in Washington proper. While the majority of my experience in Washington has been in Seattle, a stop-over on the way to the Emerald City and a day trip just outside its borders exposed natural and man-made beauty that opened my eyes to the magical and memorable offerings throughout the state. 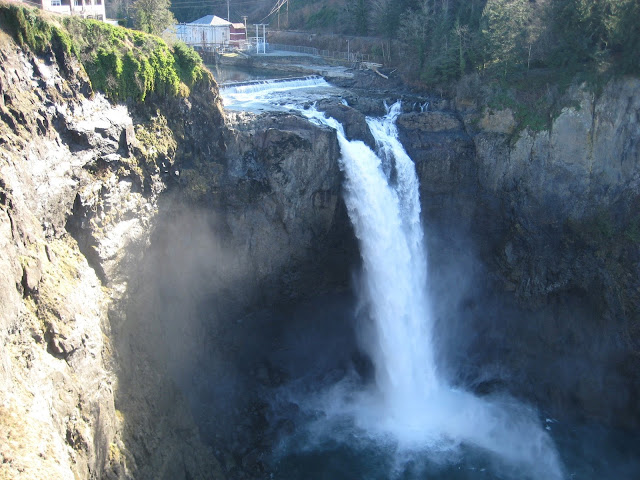 My comedy group Dirty Water was a regular at the Seattle Improv Festival, and our three trips there afforded us plenty of opportunities to explore. During our visit in 2009, we grabbed a zip car and made the drive out to the Snoqualmie Valley. Seattle is surrounded by water and mountains, which made for a lovely drive. We passed by several mountain peaks during our journey. Some of the mountains were snowcapped while the others were covered in a mossy green. 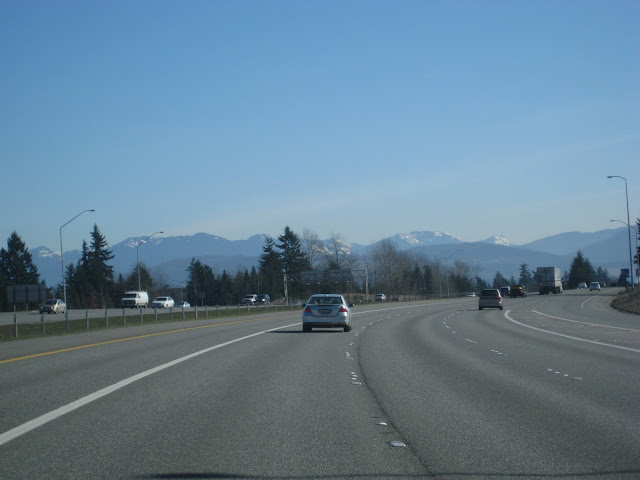 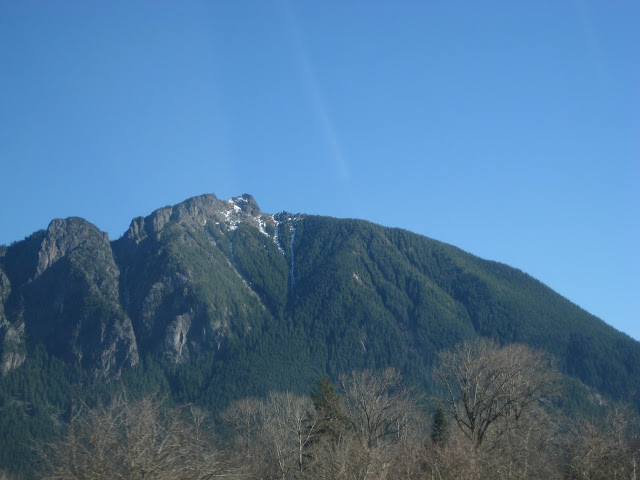 Snoqualmie is a scenic area that hosts, among other things, the Snoqualmie Falls. We were intent on checking out the falls, but first, we needed to fill our growling bellies. Fortunately, there was a diner close to the falls, and a famous one at that. 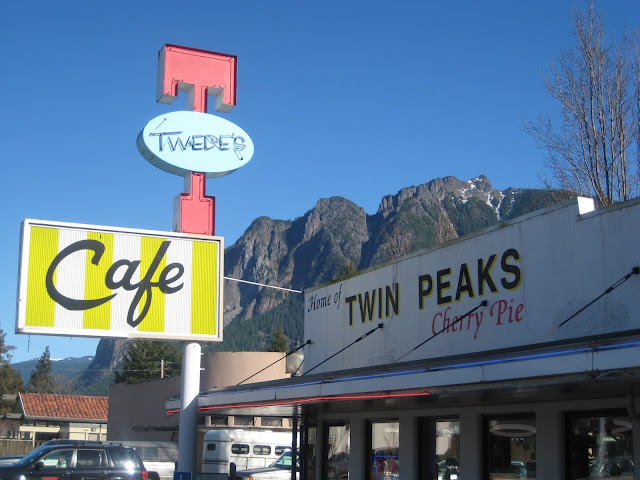 Twede's Cafe was made famous by the TV show Twin Peaks. Many of the diner scenes in the show were filmed there. The restaurant doesn't look like it did when the show was filmed because a fire in 2000 damaged it and required extensive renovations. The remodeled version of Twede's appeared in the movie adaptation of the show, Fire Walk With Me. There's lots of Twin Peaks memorabilia on the walls, and they still offer cherry pie, the quality of which was a running bit throughout the show.

I've never seen Twin Peaks. For me, the highlight of the diner was the menu full of specialty hamburgers. They had about 378 different burger options. Some were quite exotic, and every one we tasted was delicious. 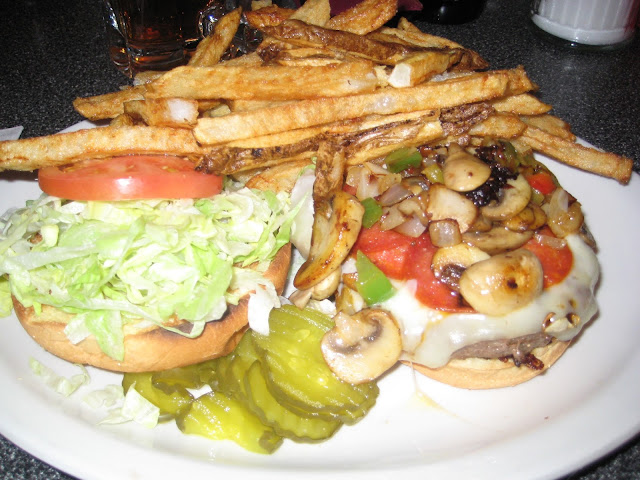 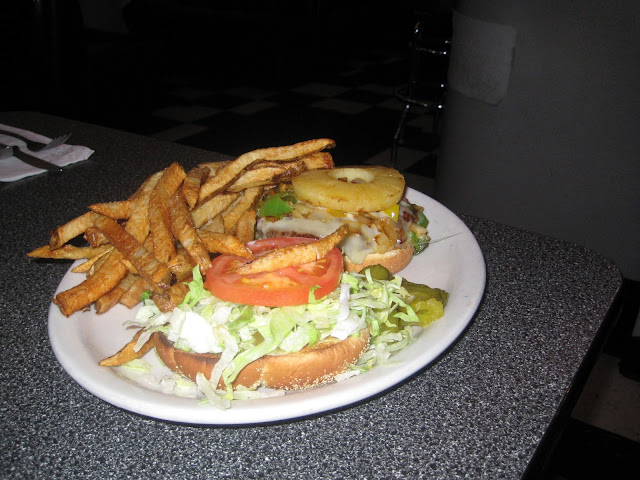 Of course we had to try the dishes made famous by the show, a slice of cherry pie, and "a damn fine cup of coffee." 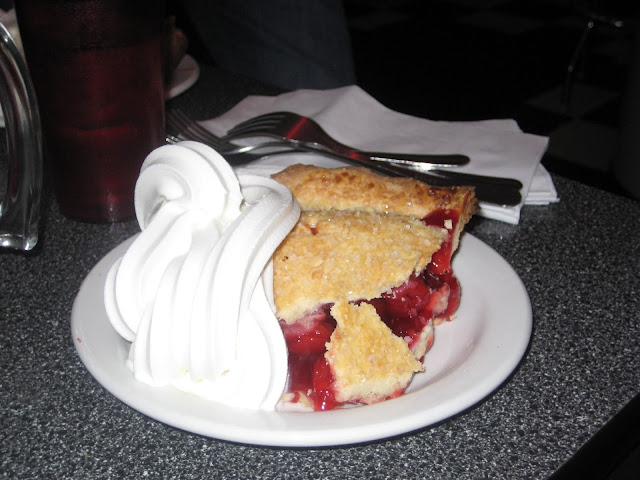 Fed and entertained, our band of hairy comedians set out towards the main attraction in the valley, Snoqualmie Falls. I've written about several waterfalls in this blog, including Rainbow Falls in Tennessee and Minnehaha Falls in Minnesota. Both of those are large falls, but at 270 feet, Snoqualmie Falls dwarfs them all. We got a great view of the falls when we arrived. 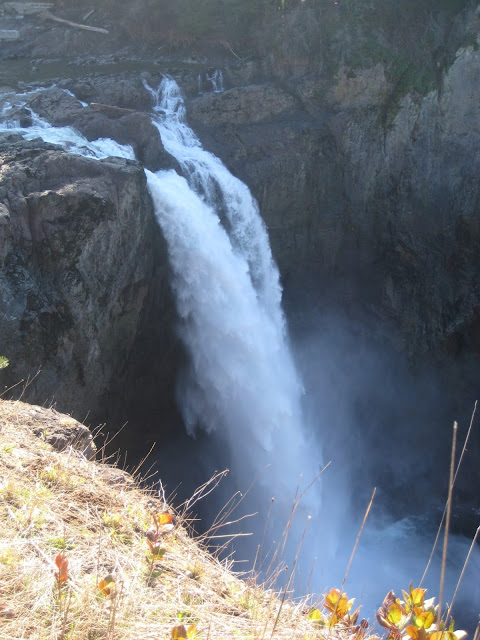 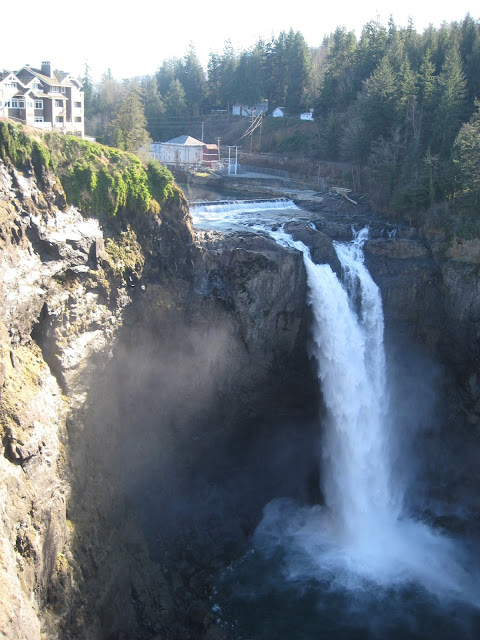 After enjoying the falls from above, we embarked on a hike that would deliver a view from below. The trail was well-manicured and easy to navigate, and the walk was downhill. It gave us a first-hand look at the rich greenery of the valley, which was beautiful. 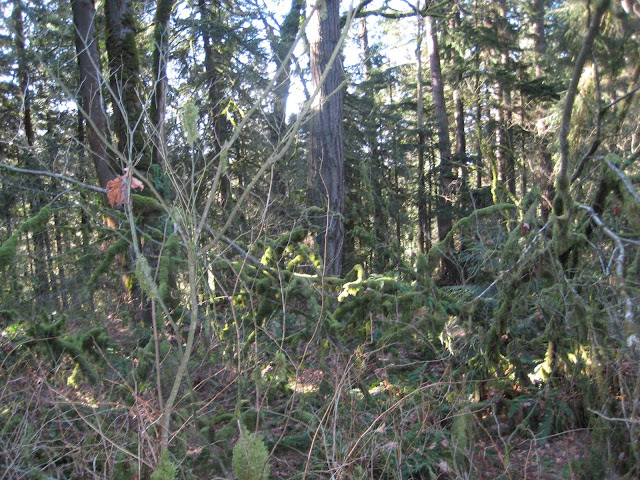 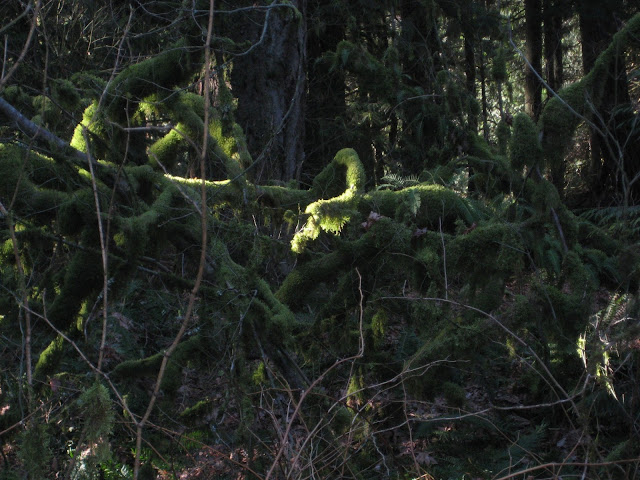 We also passed large pieces of equipment from the nearby hydroelectric plant that were not as attractive. 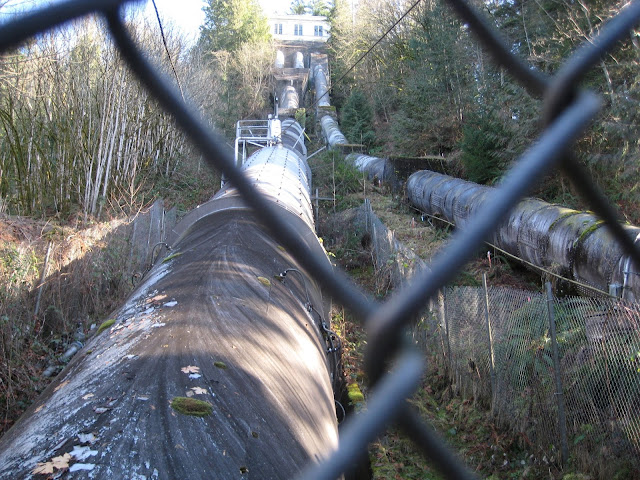 As we reached the end of the trail, we caught a great view of the river that ran off from the waterfall. 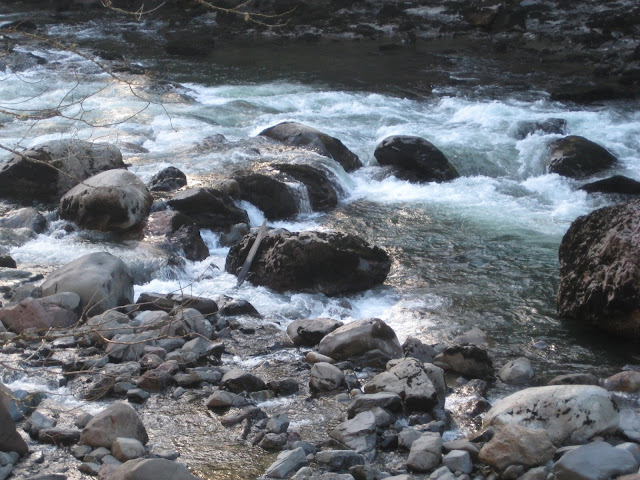 After walking along the river's edge for a while, we reached the lower observation deck, which provided a nice view of the falls from below. 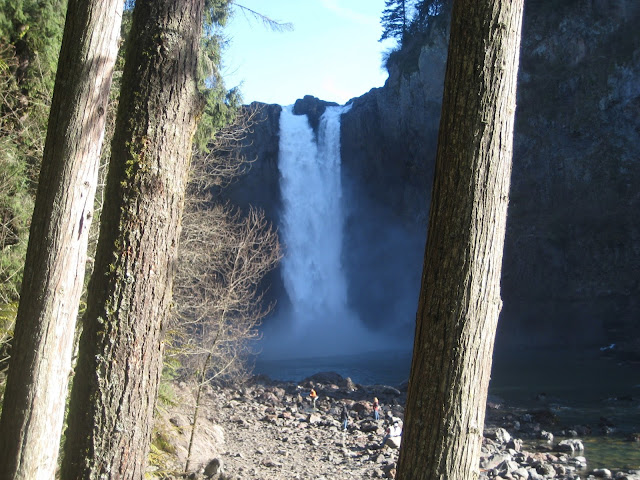 As we stood and admired the falls, we noticed several people on the river's edge enjoying a closer, clearer view. There were several signs telling visitors not to walk to the river, but clearly the locals knew what was up, so we followed their lead, hopped the fence, and ventured out on to the slippery rocks below. 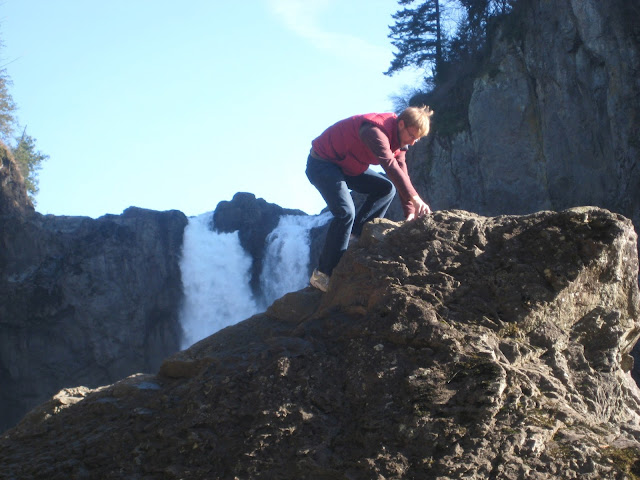 This afforded us a more direct and more dramatic view of the falls. 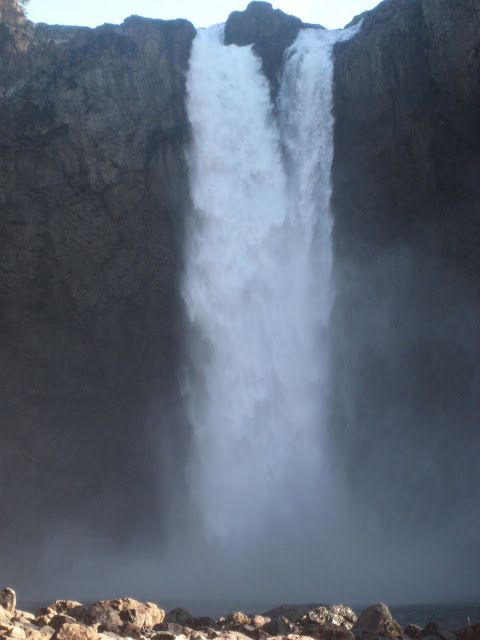 We lingered beneath the falls for a half an hour or so, enjoying the sound of the rushing water and taking in the world around us. Afterwards, we made the trek back up the trail. It was a bit more difficult on the way back up, but in the end, the 1.2 mile round trip hike was more than worth it.

I would recommend a trip to the Snoqualmie Falls to anyone looking for a day trip from Seattle, and the Twede Cafe is the perfect spot for a bite on the way. 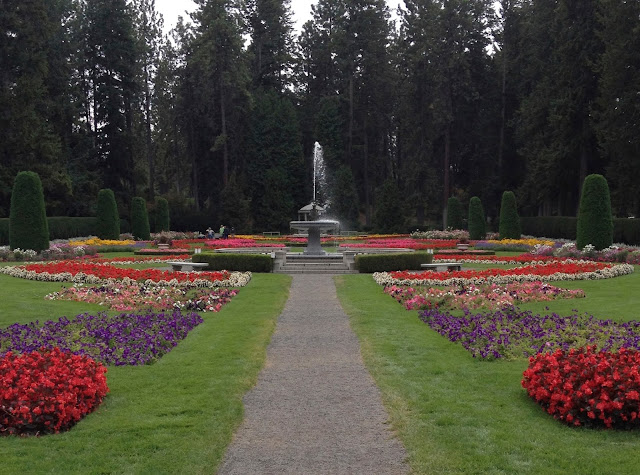 Mrs. Tires and I embarked on an epic road trip in 2014 that brought us to Yellowstone and Glacier National Park and would eventually deliver us to Seattle. After spending the night in Coeur d'Alene, Idaho, we started our last day on the road with a stop in Spokane.

We were originally drawn to Spokane by Marvin Carr's One of a Kind in the World Museum, an eccentric collection of oddities that Marvin Carr had gathered over the years. When we looked up the directions, we learned Marvin Carr passed in the end of 2013 and the museum was shut as a result.

We needed to choose a new destination quickly, so we called on our old friend Trip Advisor and chose the #1 attraction in Spokane, the Manito Gardens. This huge public park housed all kinds of gardens, including a zen garden, a rose garden and its signature Duncan Garden, a stunning arrangement of flowers that served as the centerpiece of the park. The place was absolutely gorgeous, and a joy to wander. 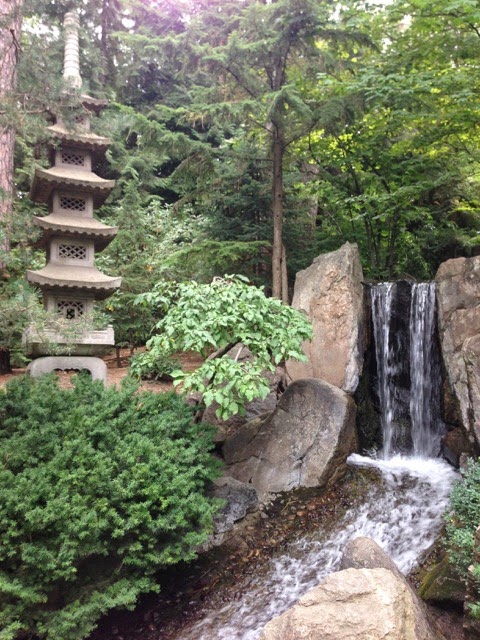 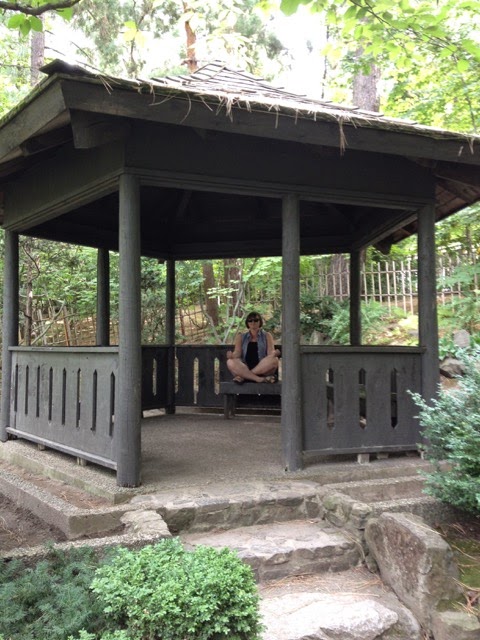 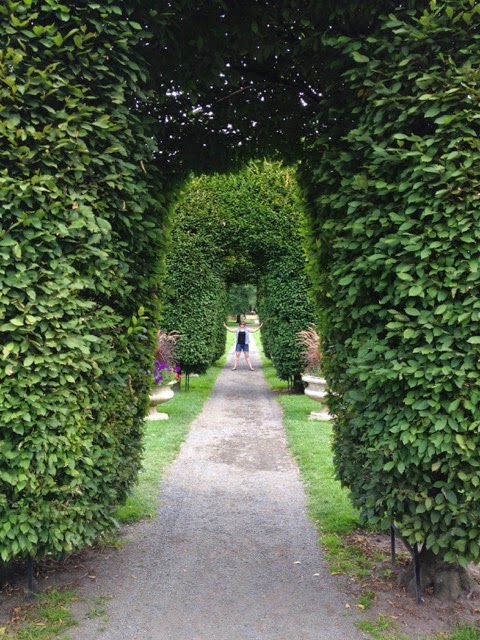 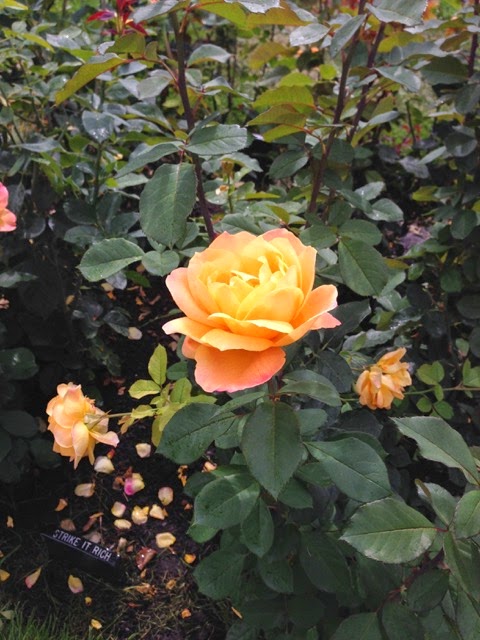 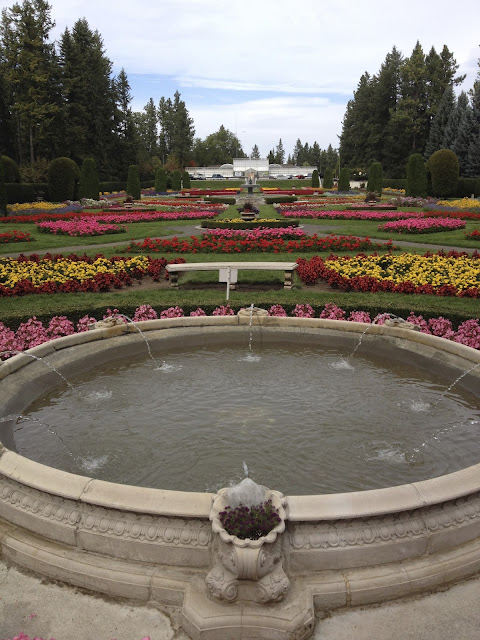 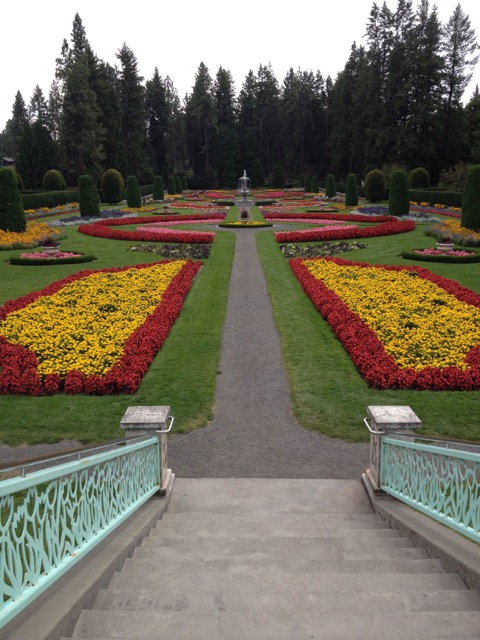 Our brief encounter with Spokane was a pleasant one. The gardens were great, and the town seemed like a normal place to live. We would have lingered longer, but we were anxious to get to Seattle, so we got back on the highway after a right proper picnic in the park.

The land got pretty flat and normal west of Spokane. After a few minutes of smelling foul scents while driving down the highway, I came to the conclusion that the surrounding towns smelled like cow shit. We suffered through the stench for a while longer, until I noticed I had been following directly behind a truck that was transporting a large herd of cows. As I passed them, I realized I was actually following a whole caravan of them. That certainly explained the odor. My apologies to the towns in Eastern Washington for jumping to such conclusions. I also apologize to Mrs. Tires.

The surroundings got craggy again towards the middle of the state. We stopped at this scenic overview for a stretch and a snack. 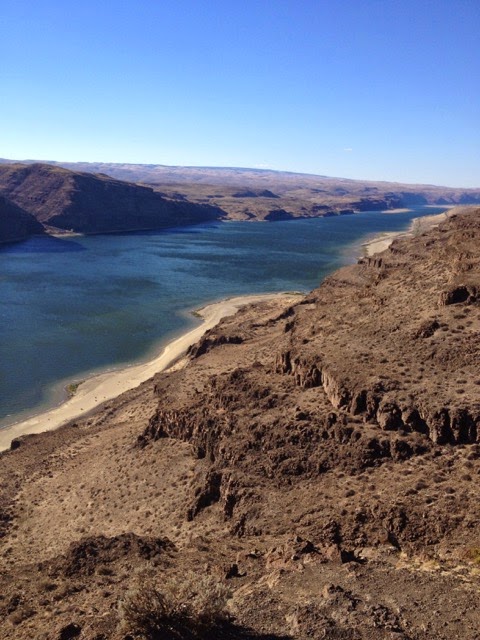 Things got more and more mountainous as we made our way towards Seattle. When we approached Snoqualmie, we noticed signs that said the highway we were taking was closing at a certain spot at 7:00 PM. It was 6:00 PM and we had about sixty-five miles until the point where they'd be closing it off. We weren't about to get stuck or fight our way through an alternative route, so we stayed focused and drove fast as we raced the clock. Fortunately, we made it past the stopping point with about five minutes to spare.

We pressed on, and eventually got to Seattle after dark. Appropriately, it was raining as we entered the city.

Check Out Washington, Part 2: Seattle
Posted by Unknown at 6:54 PM