The MetaCar was the first car I ever purchased. It wasn't the first car I ever owned - that was a beat-up, hand-me-down brown 1985 Toyota Camry with cow seat covers. The Camry car drove its last mile in 1999, and pulled in fifty dollars in trade-in value. Fifty dollars went a long way towards the purchase of the MetaCar, a 1987 Honda Accord hatchback, much like the one pictured above. I met its acquaintance when it came into my dad's car dealership, and for the bargain price of two thousand dollars, it was mine.

I LOVED that car. It ran perfectly, had lots of power, and featured headlights that popped up when I started the engine, something I had always wanted. I was also quite proud of the decals I added to the back bumper, including a Dharma Bums bumper sticker and a Gefilte Fish - a tongue-in-cheek Jewish version of the Jesus Fish that was popular at the time.

My Accord took me on many road trips, including a spring break trip to Montreal. Here are a couple of photos from that trip, the only remaining photos of the MetaCar. 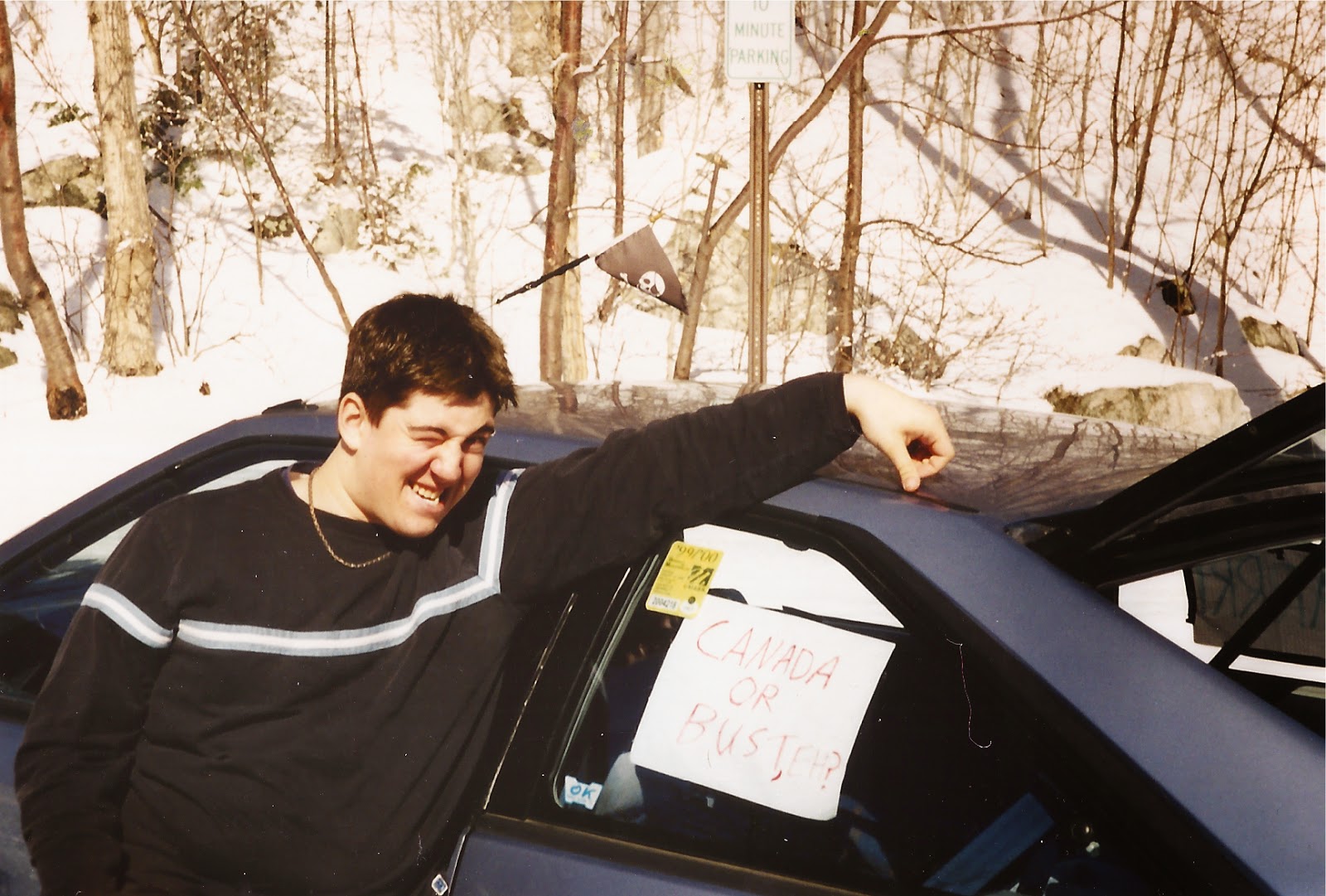 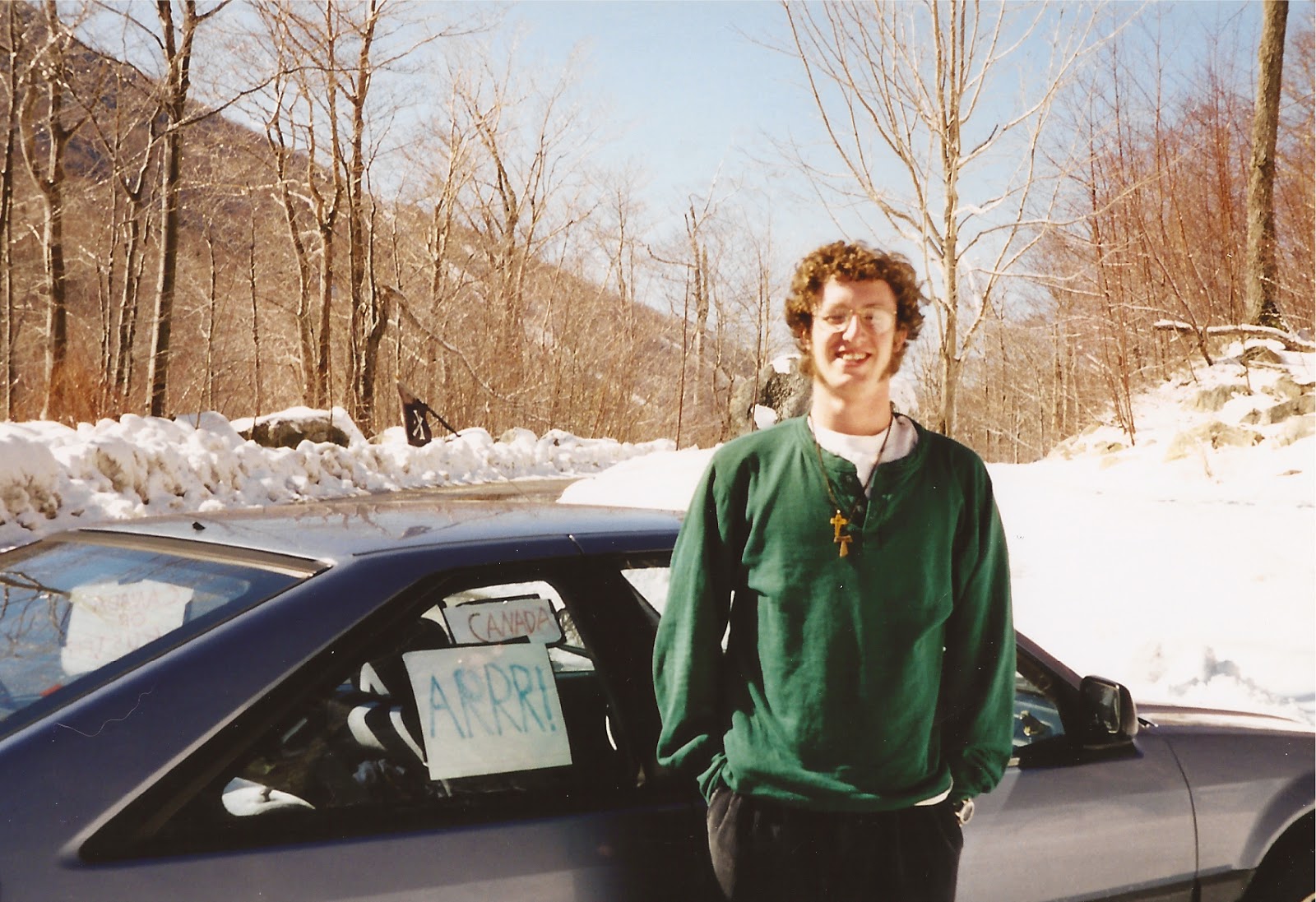 My honors thesis in college was on Metafiction, which refers to literature that is self-aware, often with the author of the book as a central character. The meta concept caught on among my comedy friends, and we mixed the idea in with our comedy on occasion. We were also into naming every little thing back then, so my Accord became known as the MetaCar.

That brings us to New Jersey. While on winter break in January of 2003, I got a call from my friend Adam. He was heading back to school after working with his dad over break, and his bus home only took him as far as New Jersey. He didn't have a way to get from New Jersey to Massachusetts, so he offered me $50 plus gas money to pick him up. My only responsibility at the time was to complete coursework for my winter class on the history of baseball, so I had the time. I convinced my friend Dan to take the drive with me, and off we went.

"What? No it's not!" he replied, appalled. "Look, right here," he said, pointing to the back of the bottle. "Warning. Poison. Do not ingest!"

Good thing he didn't listen to me. I almost poisoned my friend. We continued on down the highway, with Dan's trust in me having taken a significant hit.

As for the malfunctioning sprayer, I think it was the MetaCar's way of warning me about the troubles ahead.

Eventually we got to New Jersey and picked up Adam and his new bonsai tree. We were close to Drew University, so I called up my friend Hannah, and we headed to her campus for a break from the road. We grabbed some dinner at a greek diner in town, and then began our journey back to school.

On the way back, we noticed a lot of construction on the highway exit ramps. The cones that were placed to guide traffic around the construction were all kinds of messed up. The placement didn't make any sense, and they were confusing drivers up and down the highway. We saw several instances wherein people were literally stopping in the middle of the freeway while they attempted to figure out how to navigate the odd configurations. The construction continued into New York.

As we approached White Plains, NY, a long row of red break lights suddenly appeared ahead of me in my lane. I slammed on the breaks as quickly as I could, but it was too late. The MetaCar slammed into the car in front of it. The entire front end scrunched up like an accordion and started smoking, and the engine died. I was stunned.

As I snapped out of it, I looked around to see if everyone was ok. Fortunately everyone was fine, except for the car and the bonsai tree, which had fallen and lost all of its dirt. I tried to restart the MetaCar so I could drive it off to the side of the road, but it wouldn't respond, and it didn't sound like it was going to start up again anytime soon.

I exited the car to check on the people I hit. They were in a red Saturn, and their car seemed fine, other than a small crack in the bumper. I was afraid they'd been hurt, and I was also afraid they'd be really pissed. Fortunately, not only were they ok, they were very kind. They totally understood the circumstances, explaining they knew it was only a matter of time before the screwy traffic cones caused an accident. After we pushed the MetaCar onto the shoulder, they let us sit in the back of their car so we could be sheltered from the ten degree temperatures while we waited for a tow truck.

Eventually a tow truck came and brought us and the car to the nearest garage. It was past 11:00 PM so the garage was closed, but we were able to drop the car off outside. From there, we froze our butts off as we walked to a nearby diner. Adam and Dan ordered some gravy fries while I called my parents to tell them what happened, and then started calling around for a huge favor - a ride back to campus. It was clear the MetaCar wouldn’t be getting us back home. My girlfriend at the time reluctantly agreed to come get us.

Soon after, the diner we were at closed, so we bundled up and hiked to a diner a couple of miles away that was open all night. We got cozy there, as it would be a good three hours before our ride got to us. Adam ordered more gravy fries and taught Dan how to play Keno while I hung my head in sadness and mourned the loss of my beloved car.

At just past 3:00 AM, my girlfriend and her roommate picked us up. We got back to school at about 6:00 AM and got some much-needed sleep.


I got a call from the garage a few days later. The car was totaled and would never run again. Apparently the MetaCar's self-awareness was too much and it took it's own life. I was heartbroken. I hadn't just lost a vehicle. I had lost a friend.