My travels have taken me across Colorado a few times. It's a straight-up cool state that offers something new every time I visit.

This post features some guest photography by Matt Lang. Matt's photos are credited in the captions. Thanks, Matt!

My first trip through Colorado happened in the summer of 2000.  My friend Cein was moving across the country and he brought me along to ride shotgun during the drive from California to Vermont. We had just left Utah and were heading east. A sign with the words "Welcome to Colorful Colorado" greeted us as we entered the state. Colorado is indeed colorful, with green and yellow forests covering reddish-brown earth. 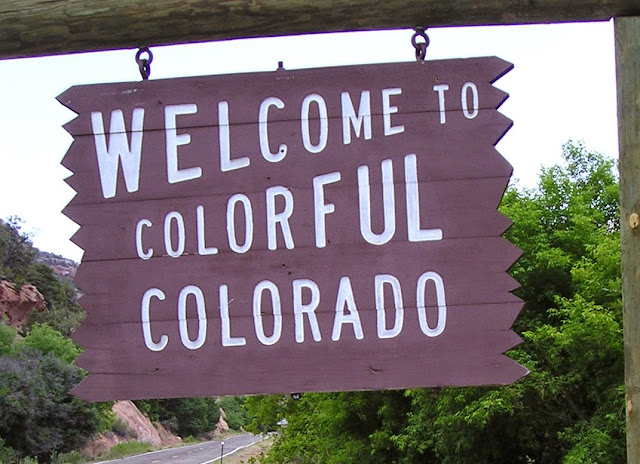 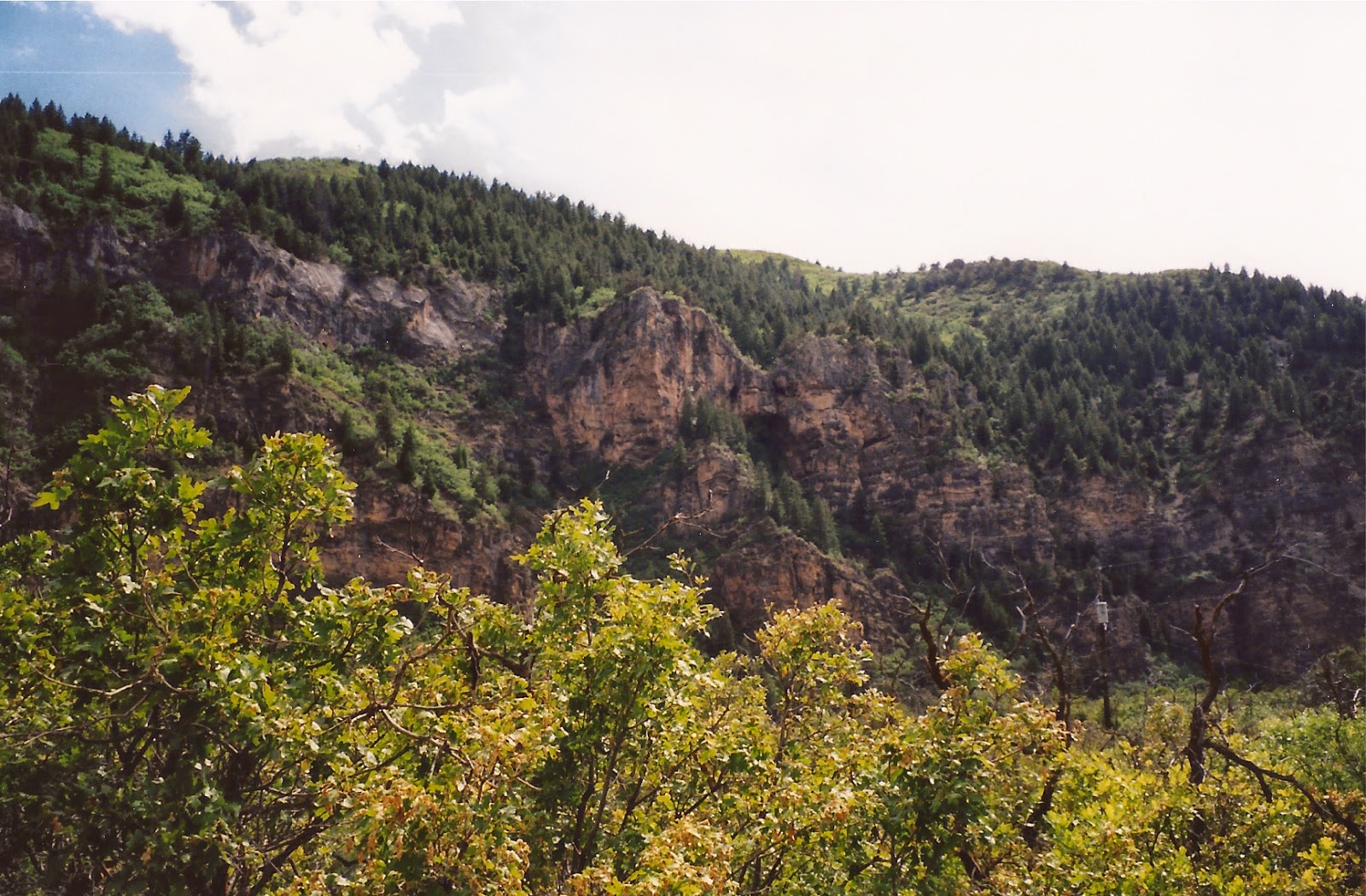 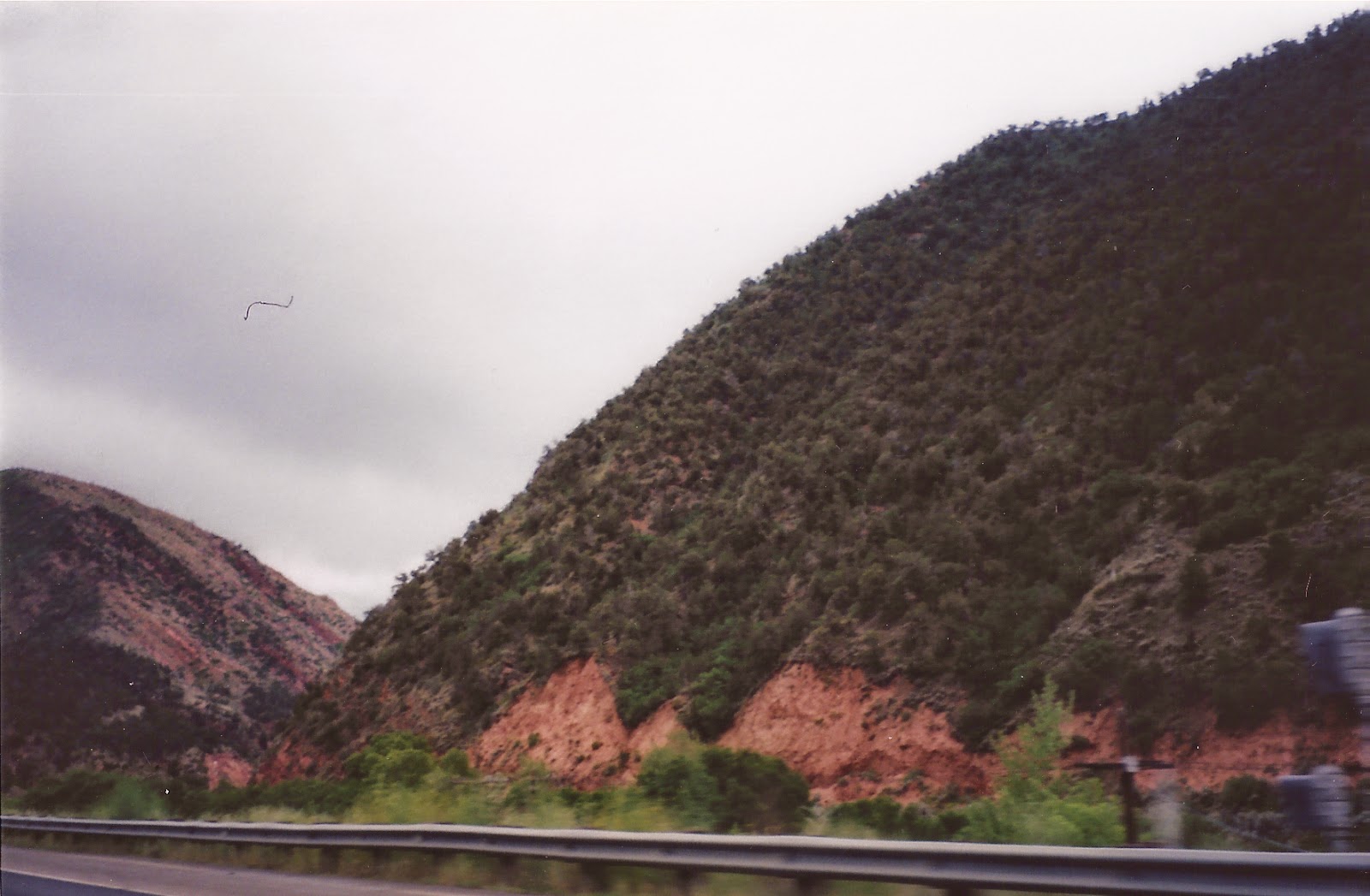 We spent the night at a hostel in Denver. I was taken by the fact that the city is surrounded by snowy mountain tops. There was something magical about being in a dense urban area and seeing wild, burly mountains in the distance. Unfortunately we didn't get to check out the city much, as we were on our way to Wyoming the next morning. 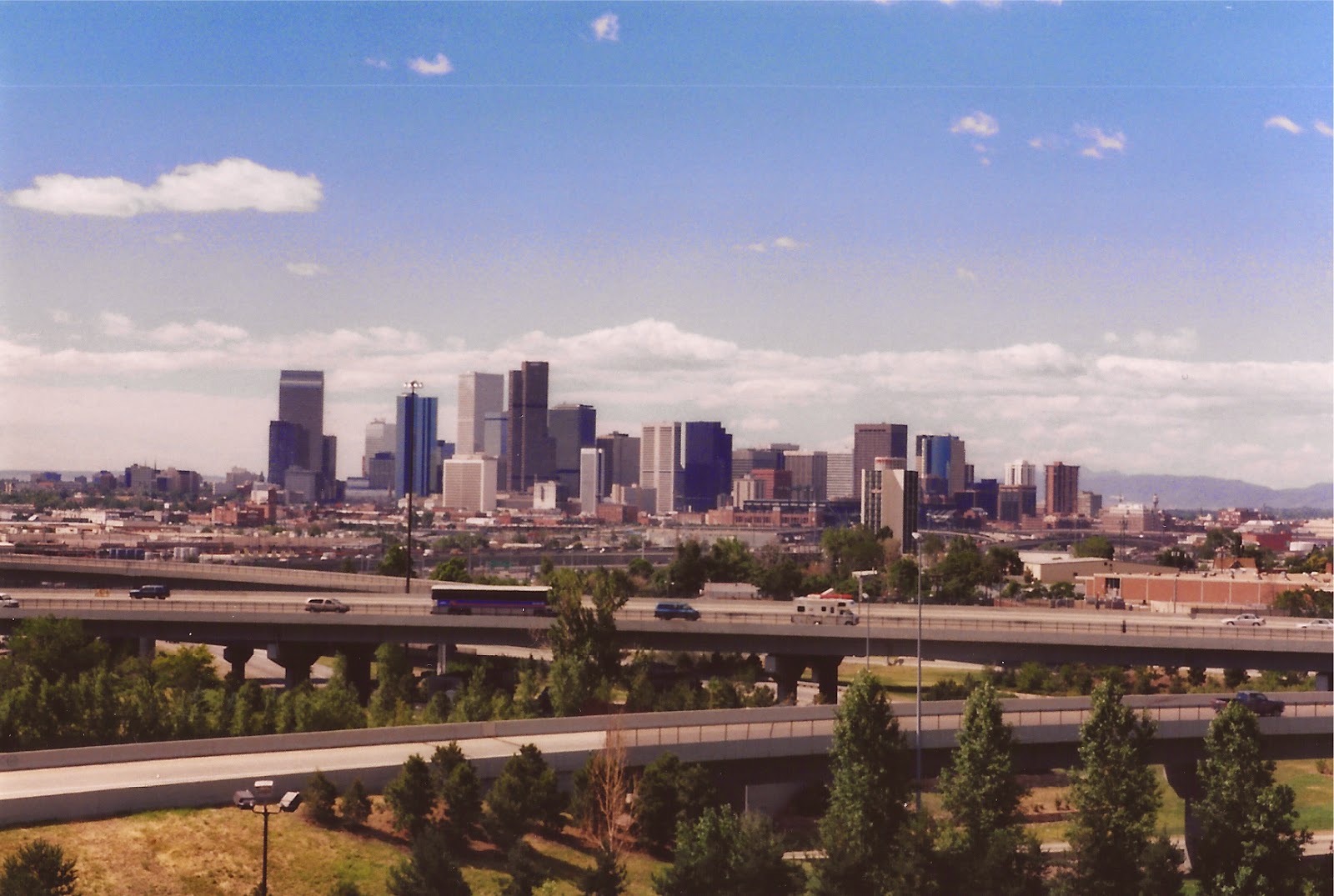 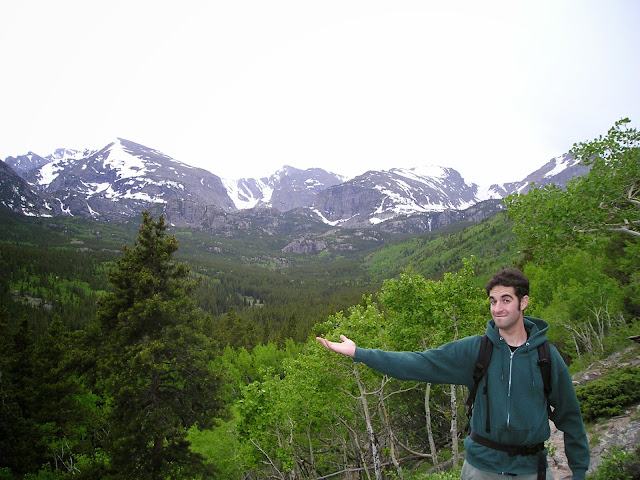 I made a return trip to Colorado in 2003 when my girlfriend at the time and I were moving to California. We had arranged to stay a couple of nights with her sister's friends in Steamboat Springs. Our hosts were essentially strangers to us, but they were incredibly kind and treated us like royalty.

One of their many generous offerings was a pair of tickets to the Strawberry Park Natural Hot Springs. Picture three adjoined rustic swimming pools filled with 100% natural water that flows from a hot spring located in a mountain that sits above the pools. The water is the perfect temperature, and we sat and soaked in it for hours. The view was amazing. The pools sit at the base of a mountain, they're isolated from civilization, and they're surrounded by a forest of pine trees. At one point a deer came out of the surrounding woods and wandered close to the pool, adding an extra bit of wonder to this amazing place.

A couple of hours of soaking got us pretty tired, so we called it a day just as the facilities started preparing for the evening's activities. It looked like the pools would be a very different place in the evening, as they were setting up turntables, and fire jugglers started warming up (ehem) as we gathered our things. Rumor has it that at night, clothing is optional. 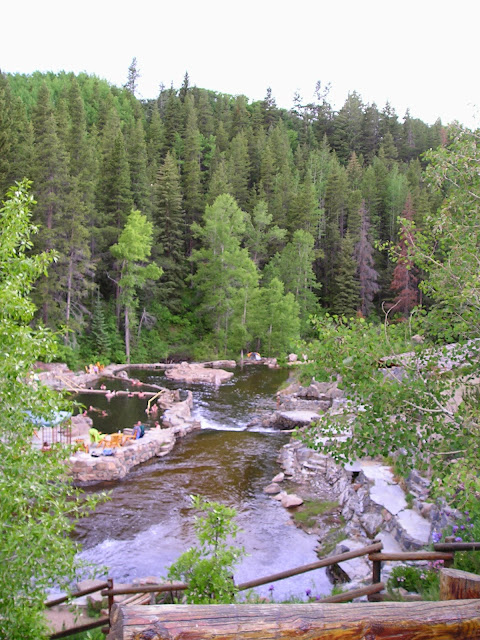 There were several hiking trails around Steamboat Springs, and we took advantage of them. We encountered gorgeous scenery filled with snowy mountain peaks, wildlife and that delightful Colorado color. 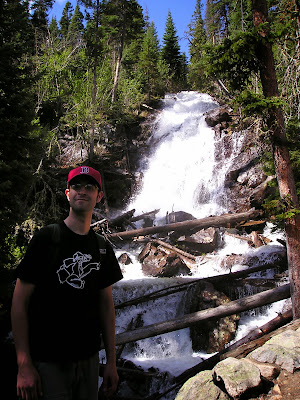 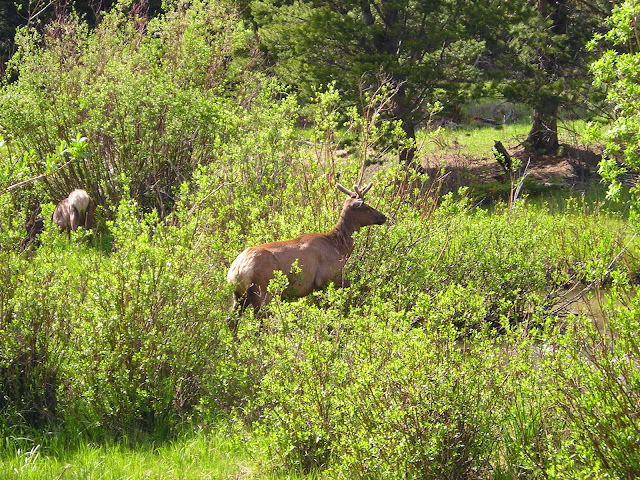 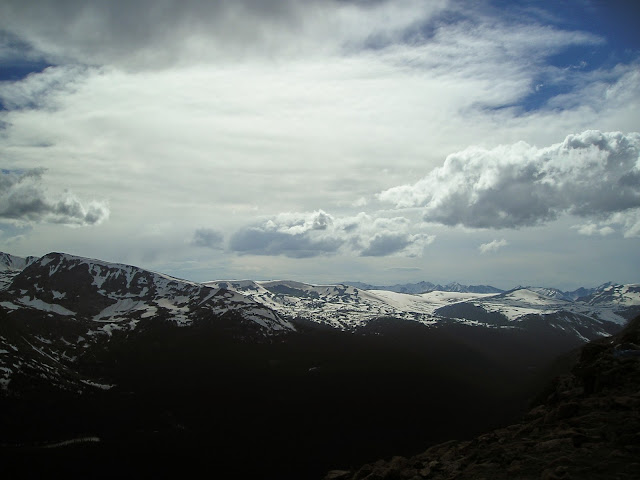 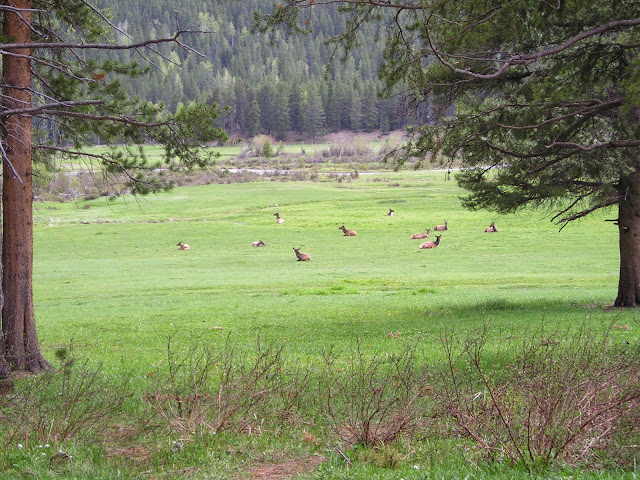 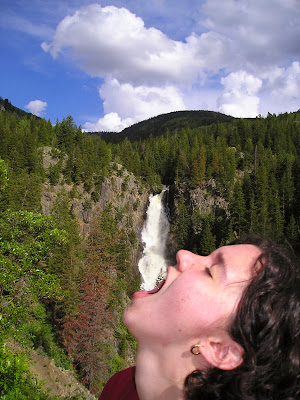 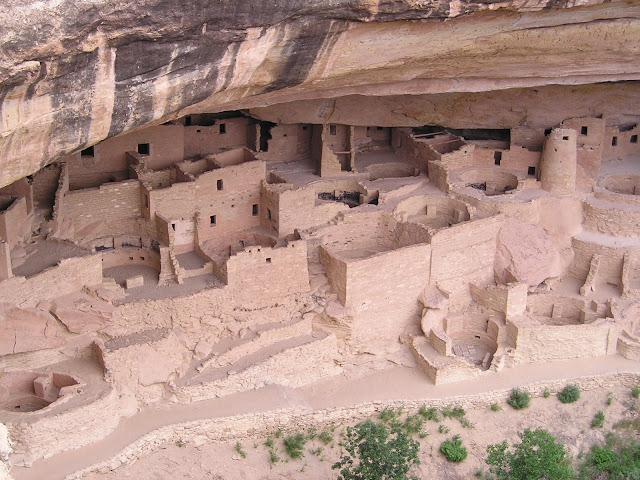 After saying goodbye to our amazing hosts the next morning, we continued our journey through Colorado, and made a stop at Mesa Verde National Park. This park is unique because it is the only park created to protect man-made structures. It's an interesting stop, as it affords an up-close and personal view of the dwellings left by the Anasazi people. We took a ranger-guided tour of the ruins that involved climbing through tunnels and up and down ladders to get to the dwellings, which added an element of adventure. 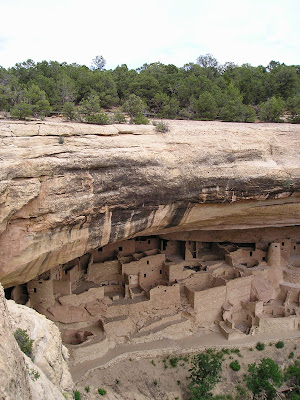 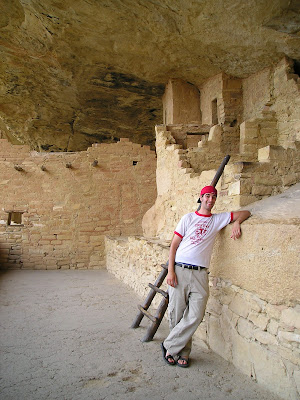 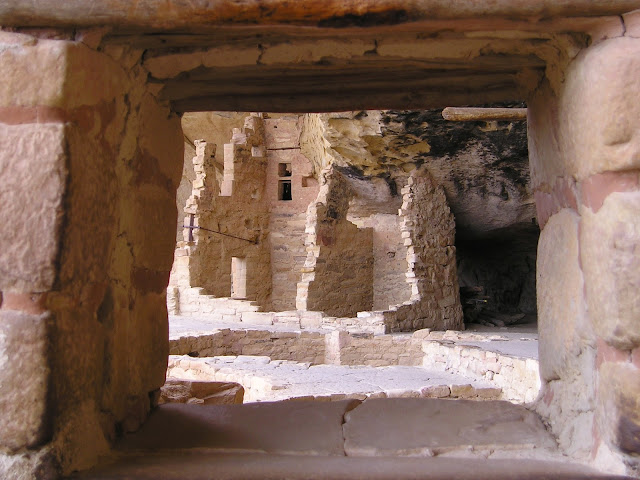 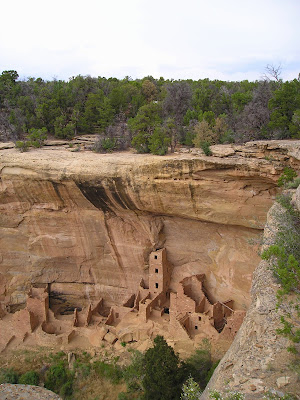 There were also several lizards that appeared in various places throughout the park. 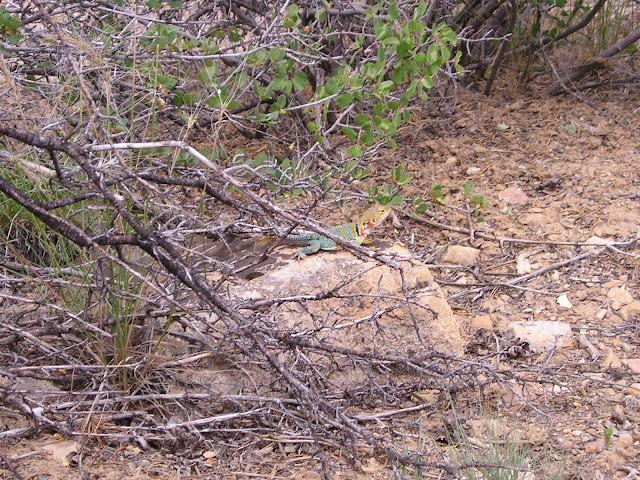 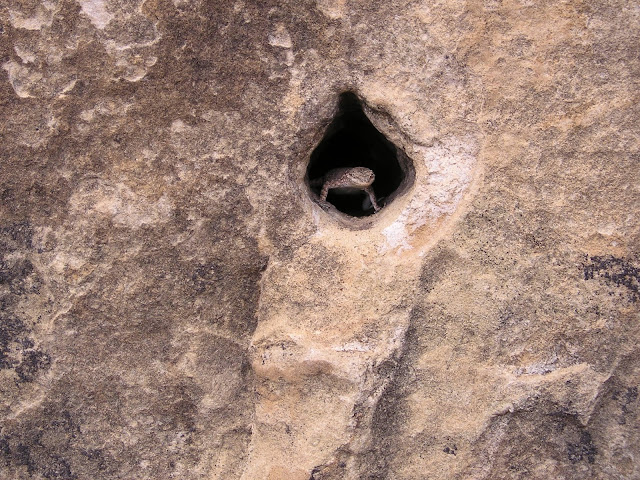 The ruins were really interesting and it was fun to try to imagine what life would be like living there. Mesa Verde may not do it for national park buffs that seek natural beauty, but as a road trip stop, it is top-notch and recommended.


On our way out of Colorado, we decided to stretch our legs in a funny-sounding town called Telluride. Boy did this random decision work out well! Telluride is a beautiful ski town with a quintessential Colorado vibe, with ski bums and bearded people occupying the town year round. 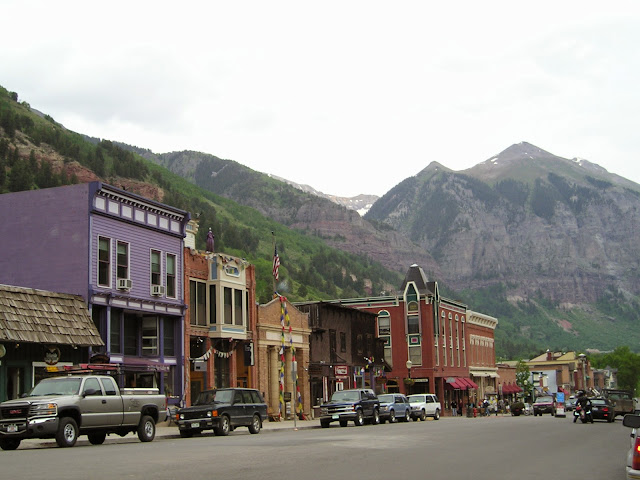 The main lift at the nearby ski resort operates all year, allowing visitors take in the view of the gorgeous scenery that surrounds the town. It was too late in the day to ride the lift, so we settled for some wandering, stopping in a bookstore and a brewery and then grabbing some dinner at a delicious sushi joint. When it came time to leave, I didn't want to go. I really connected with this town and wanted to stay as long as possible. As we drove away, I started hatching a plot to open up an improv theater in Telluride someday.


More on this trip:

In addition to the skiing and the scenery, Telluride also hosts several well-known festivals every year, including a film festival, a few theater festivals and a bluegrass festival. My friend Matt has attended the Telluride Bluegrass Festival a few times, and he swears by it. During his last visit to Telluride, he hiked the mountains surrounding the town and took some amazing photos, which he has generously donated to this blog.


Remember when I said I crossed Colorado when I was moving to California? Well, it didn't take too long before I turned around and left. This meant another trip through Colorado in the summer of 2003, one that would deliver the most harrowing experience of my life.

After leaving LA and dropping by Cein's place in Utah, I drove to Gunnison, Colorado to visit my friend Katie. She had just moved there, so during my one night in town we decided to do some exploring. Gunnison is surrounded by mountains, so we cruised through them to check out the scenery. We didn't really know where to go, so we took a few random roads that looked promising. Eventually we turned off the paved road and onto a dirt road. This road became pretty remote pretty quickly, and soon there was no civilization in sight. A light rain started falling as we forged on through the mountains, and the dirt road became slippery as we climbed.

Eventually we came to a road that was steep and soupy. We were in a heavy-duty Ford Blazer, so we figured we'd make it through, no problem. We were wrong. Half way up, the Blazer started to slip and veered into a ditch. We tried to fight our way out of it, but the mud was thick, and we got to a point where the harder we tried to steer out of the ditch, the deeper we went into it. We were stuck.

We got out of the car and assessed the situation. Both passenger-side wheels were deeply entrenched in the mud. We tried pushing the car. This did nothing. We tried putting sticks and brush underneath the treads to get some traction. No dice. We were running out of options and getting desparate. We started putting anything under the tires we could find, eventually trying things like sweatshirts and vinyl records. Nothing was a match for the mud.

As darkness settled in, we realized we weren't going to be able to get the car out on our own. We assessed our options. We would need to call for help. Fortunately, Katie had a cell phone (not everyone did at that point in time), but when we tried to call out, we found we had no signal. We tried a good twenty times. Nothing. We'd have to go find a signal to make the call, which meant leaving the car and forging through the rain, not knowing we were going. Making things worse, it would soon be dark. Nonetheless, we locked up the Blazer and started walking back towards where we came, taking turns obsessively hitting redial as we walked.

It was a moonless night, and our only source of light was my tiny LED keychain that gave off a faint blue glow. As we walked, we started hearing wild howls and grunts in the surrounding woods. At first they were distant, but eventually they came closer and we started hearing the sounds of branches and twigs breaking in the forest that surrounded us. There was definitely an animal close by, and it was definitely large. It followed us for some time. We were already on edge, but this put our fear into overdrive. A wild animal we couldn't see was drawing closer, and we could only assume it wanted us for dinner. Our pace quickened. Soon after, it started pouring. It was also getting very cold, which of course is common on remote Colorado mountains. Things were looking bleak. We trudged on.

Eventually, after approximately fifteen thousand redials, we got a signal. Encouraged, we called 911 and got through. We explained our plight and they were glad to help, but there was one problem: they didn't know where the hell we were, and neither did we. All we could tell them was we had turned onto a dirt road, and many miles later we encountered a steep, muddy incline. The officer we were connected with wasn't sure how to find us, but he was willing to try. I told him to look for the blue light we were carrying.

Somewhat relieved but still not out of the woods (literally or figuratively), we sat down in the middle of the trail and waited. We huddled for warmth and assured each other we'd be ok. We'd later admit to each other that we were scared out of our minds. We could still hear animal noises, and they were definitely close by. Some additional growls from the woods kept us on high alert. All we could do was shine the light and hope the police would get to us before the animals did.

Finally, after what felt like hours, we saw some headlights in the distance. Overjoyed, we leapt up and frantically flashed the light. A kind, mustachioed police officer rolled up and told us to hop in. We were so happy and relieved. He said he saw the blue light from miles away. The more dramatic side of me likes to think the LED light saved our lives.

The cop took us out the way we came in, and even gave us a ride home. The next day we called a tow truck to get the car out of the ditch. He took a different route, down a state highway and then into the woods. We didn't drive through the forest for more than a tenth of a mile before getting to the Blazer. Turns out we were within walking distance of a major road when we got stuck. Go figure. They hooked a line to the Blazer and pulled it out of the ditch with ease.

We returned to Katie's place after that and relived our misadventure, confessing to each other how scared we really were and rejoicing over the fact that we lived to tell the tale. After that, we said our goodbyes and I headed on to Chicago, a bit stronger after being stranded on a mountain and surviving.

Must See in Colorado: