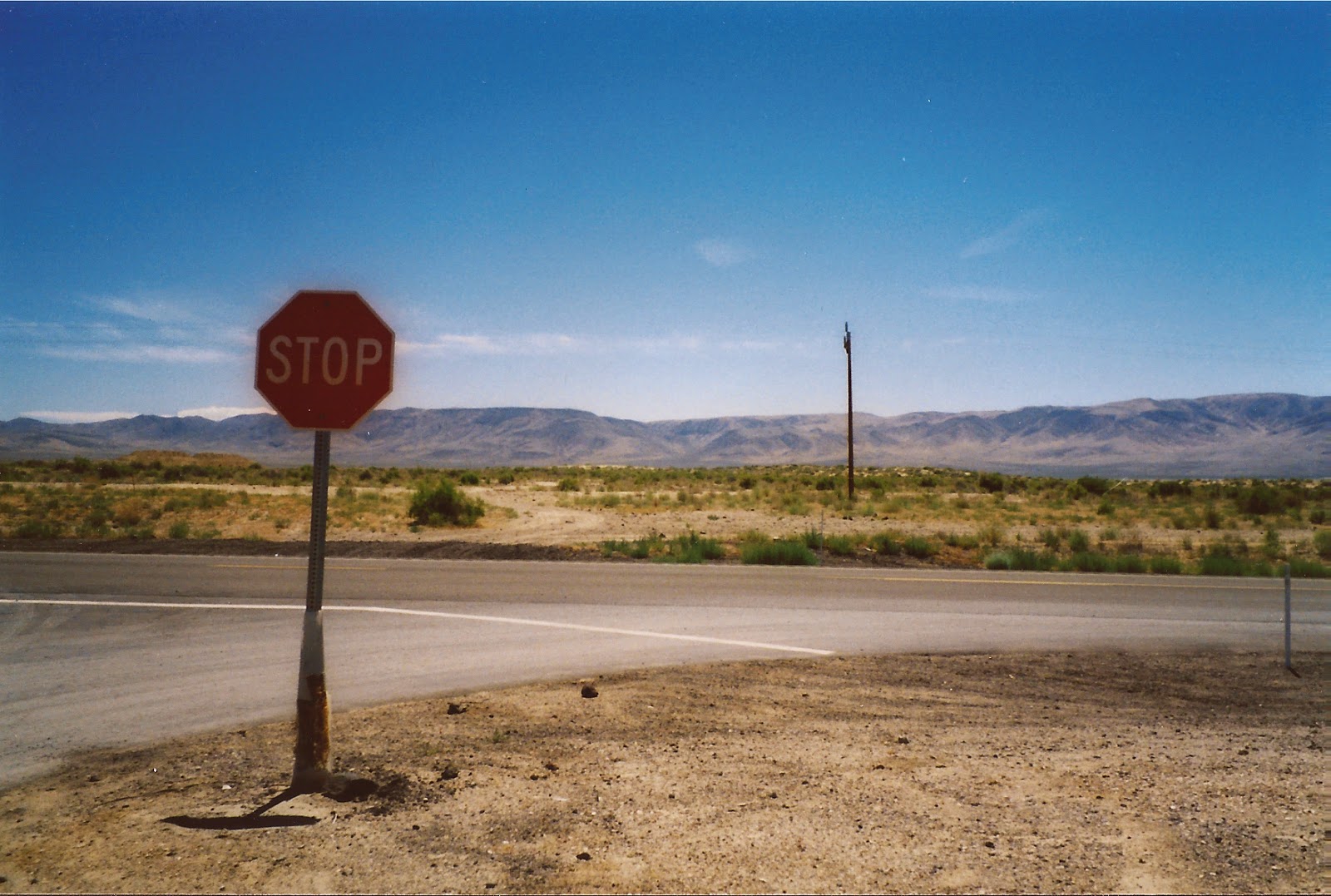 I've been through Nevada a few times, and each has been an interesting and surprising experience.


My first jaunt through the state was during my cross-country trip with my friend Cein, who was moving from California to Vermont and brought me along as co-pilot. We started out by driving through beautiful Lake Tahoe, getting a nice view of the namesake lake as we drove past. After cruising by the east end of Tahoe, we noticed the terrain starting to change. The roots of the massive trees started to show, and soon the greenery gave way to dryer land, with more and more dirt and rocks exposed as we drove along.

After stopping at a Carl's Jr. In Carson City, we set out east on US 50. This road is known as the Loneliest Road in America. I could tell how it got its name. It's just one lane each way, there are very few cars on the road, and there are even fewer towns on the route. 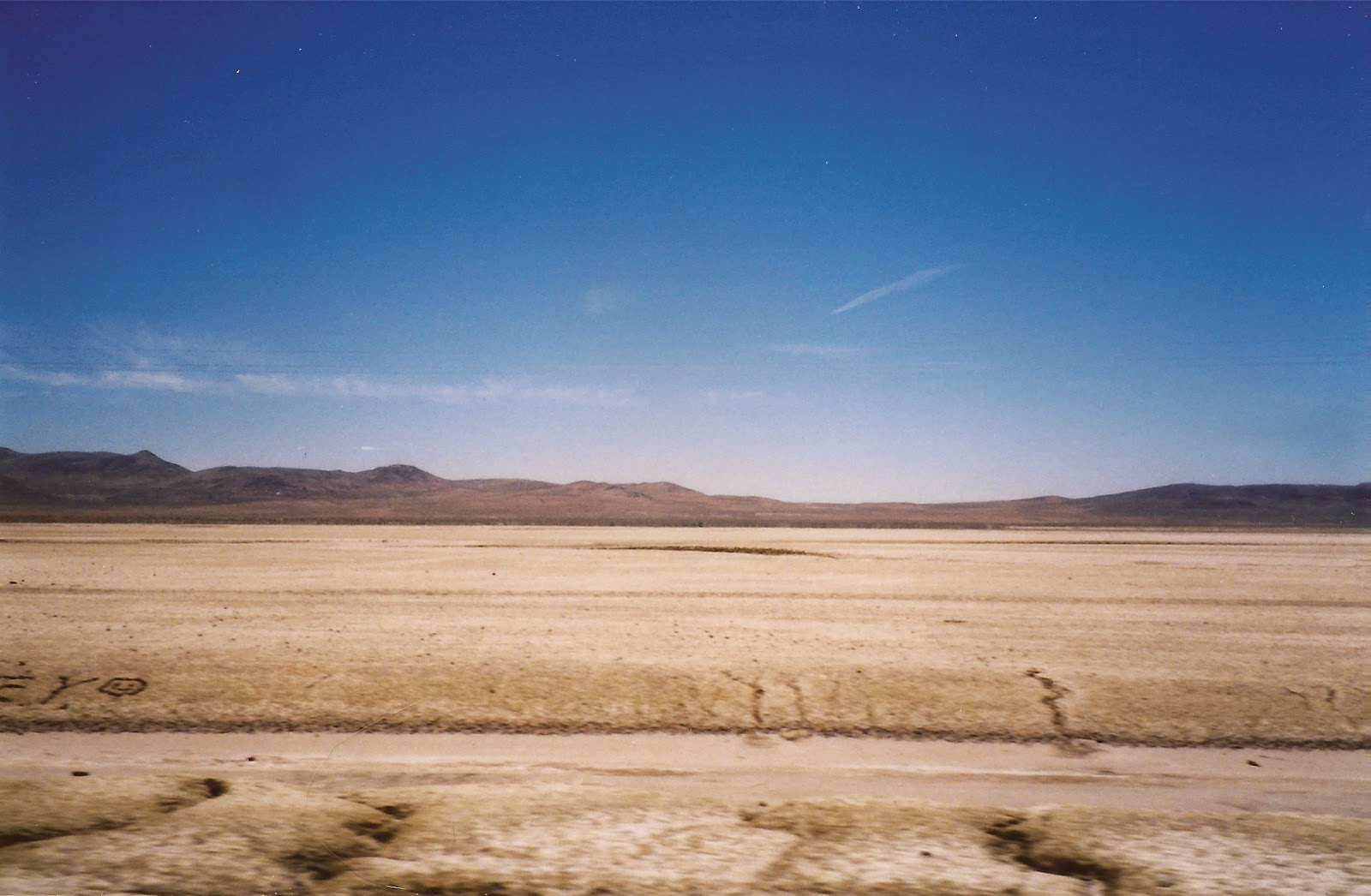 The road was lined with words written in stone, something I had never seen before. 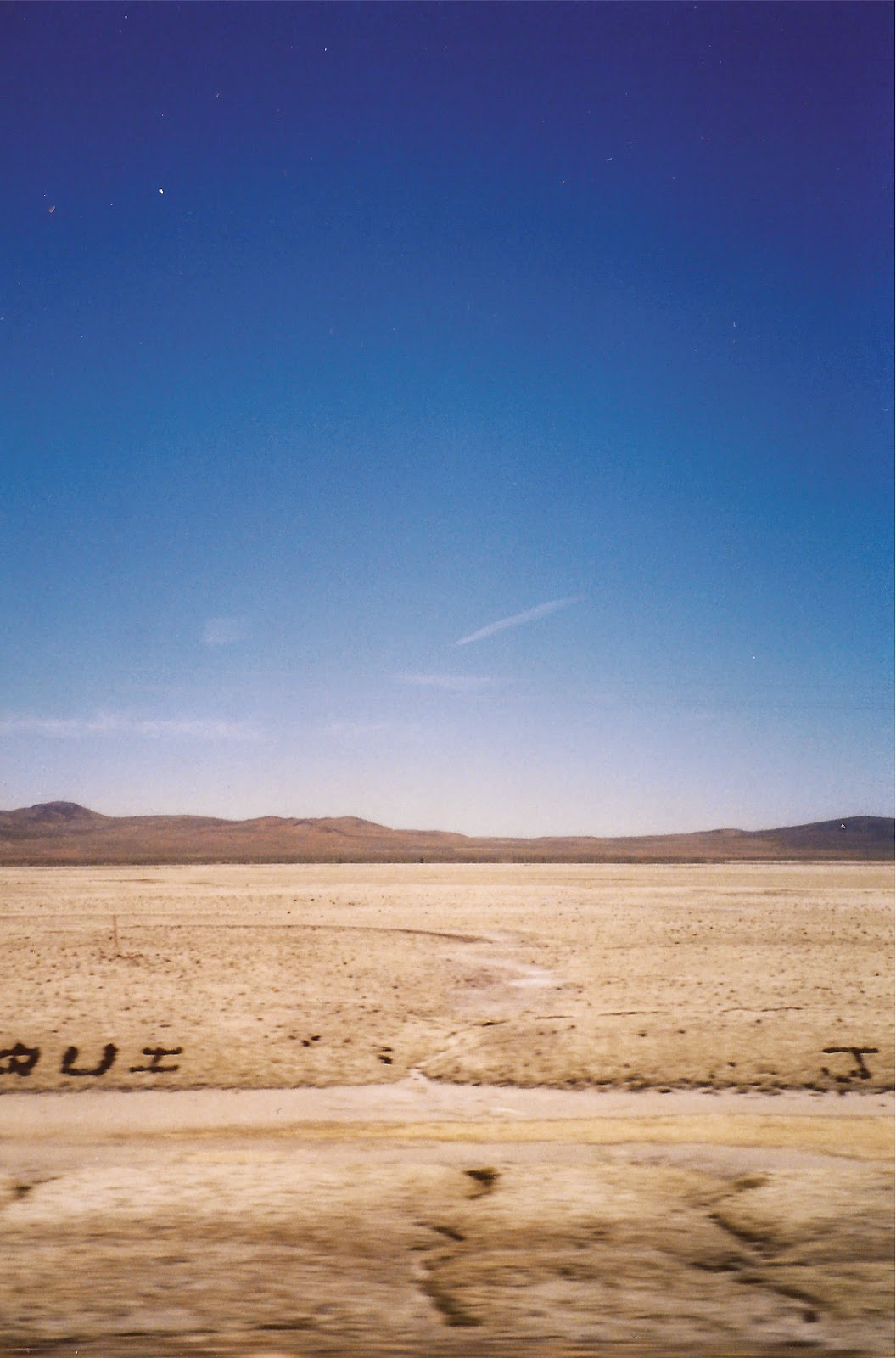 While it certainly was lonely, it didn't lack visual interest, as the brown and red land that surrounded us was broken up by many hills and a few dry mountains. Along the way, we stopped at the Loneliest Pay Phone on the Loneliest Road in America, a rest stop made up of nothing more than a dirt parking lot and a single, stand-alone pay phone. I tried calling my girlfriend at the time from the phone, but the four key was broken. 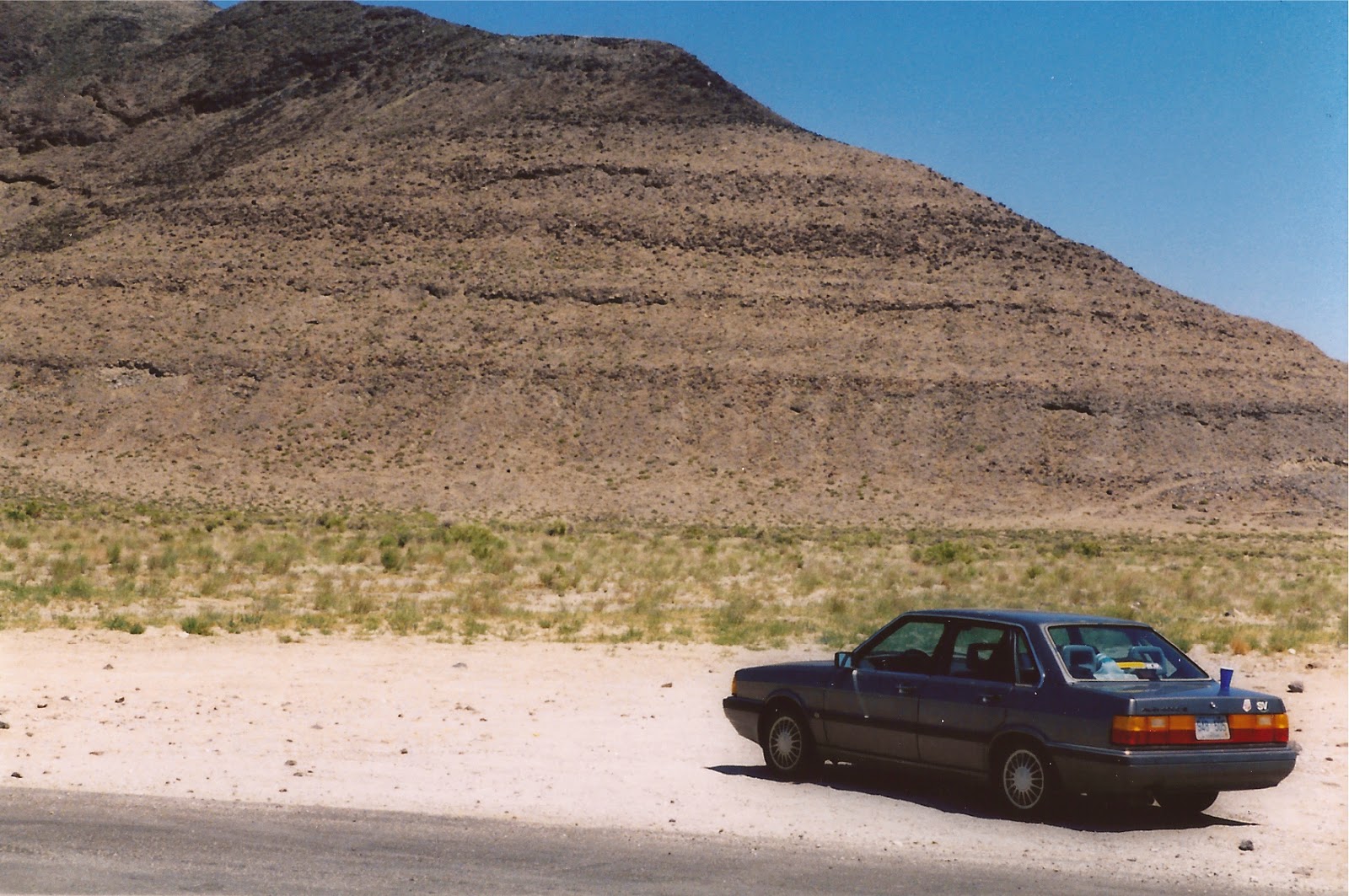 Moving on, we stopped for a while in Eureka, a town name that amused nineteen-year old me to no end. This is the largest of the towns along the way, a silver and lead-mining town that never recovered after the mines closed in the early 1900s. 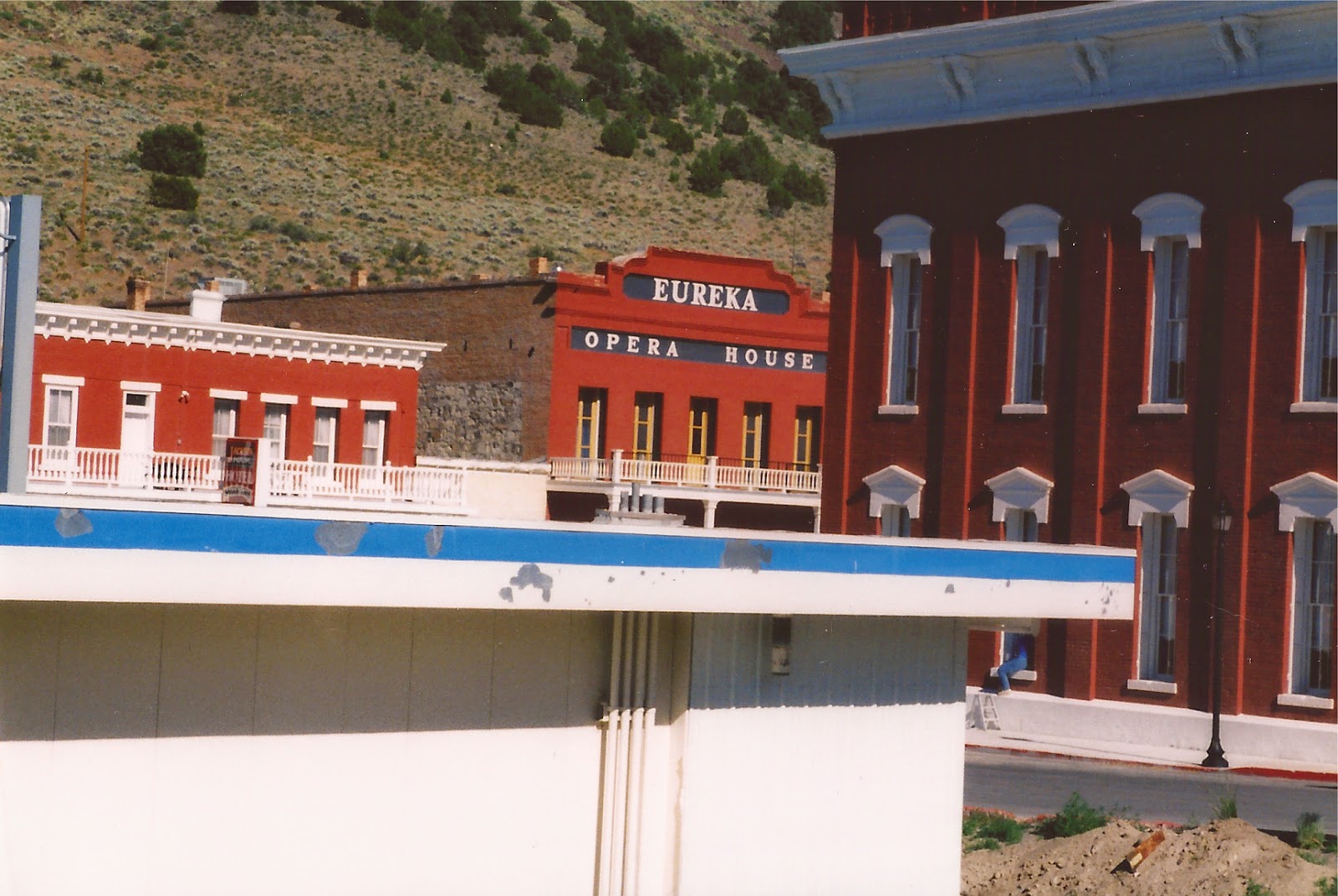 We also stopped in the town of Ely, run-down miniature town that never lost its charm.

We made it to Great Basin National Park after nightfall. The whole place was pitch black, so we had no idea what our surroundings looked like as we drove in. Fortunately, the moon was full that night, which provided some guiding light. While Cein navigated the park, I wrote this haiku, which has always stuck with me.

The bright moonlight was immensely helpful, but at the same time it was washing out the sea of stars that could have been shining in the clear sky - a funny little observation that showed you can't have it all.

We pushed the Audi to its limits as we climbed to the peak, which is more than ten thousand feet above sea level. After driving for what seemed like hours, we eventually reaching a campground, where we stayed the night in a tent we assembled in the dark.

The next morning we got a full view of our surroundings - tall pine trees overlooking a gigantic mountain peak covered in snow. Hard to believe this was all around us as we drove to the peak in the pitch black the night before. 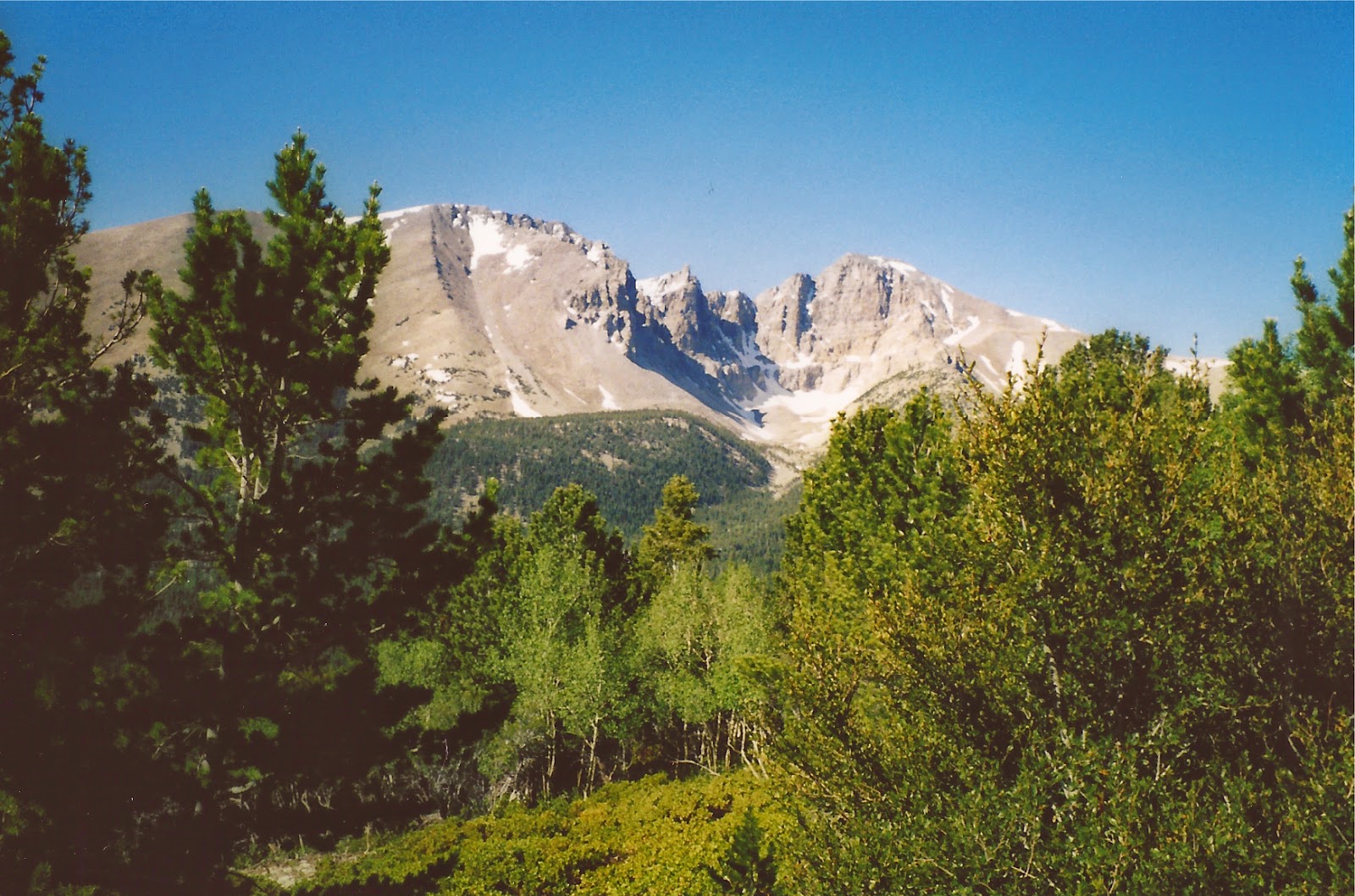 After taking in the view and taking down the tent, we headed to Lehman Caves, one of the main attractions in the park, where we took a guided tour. The cave looked exactly like what I expected it to look like, including several stalactites and stalagmites. It was a remarkable site, and the first cave I had ever visited. After the tour, it was time to say goodbye to Nevada and head on to Utah, which would bring its own unexpected adventures. 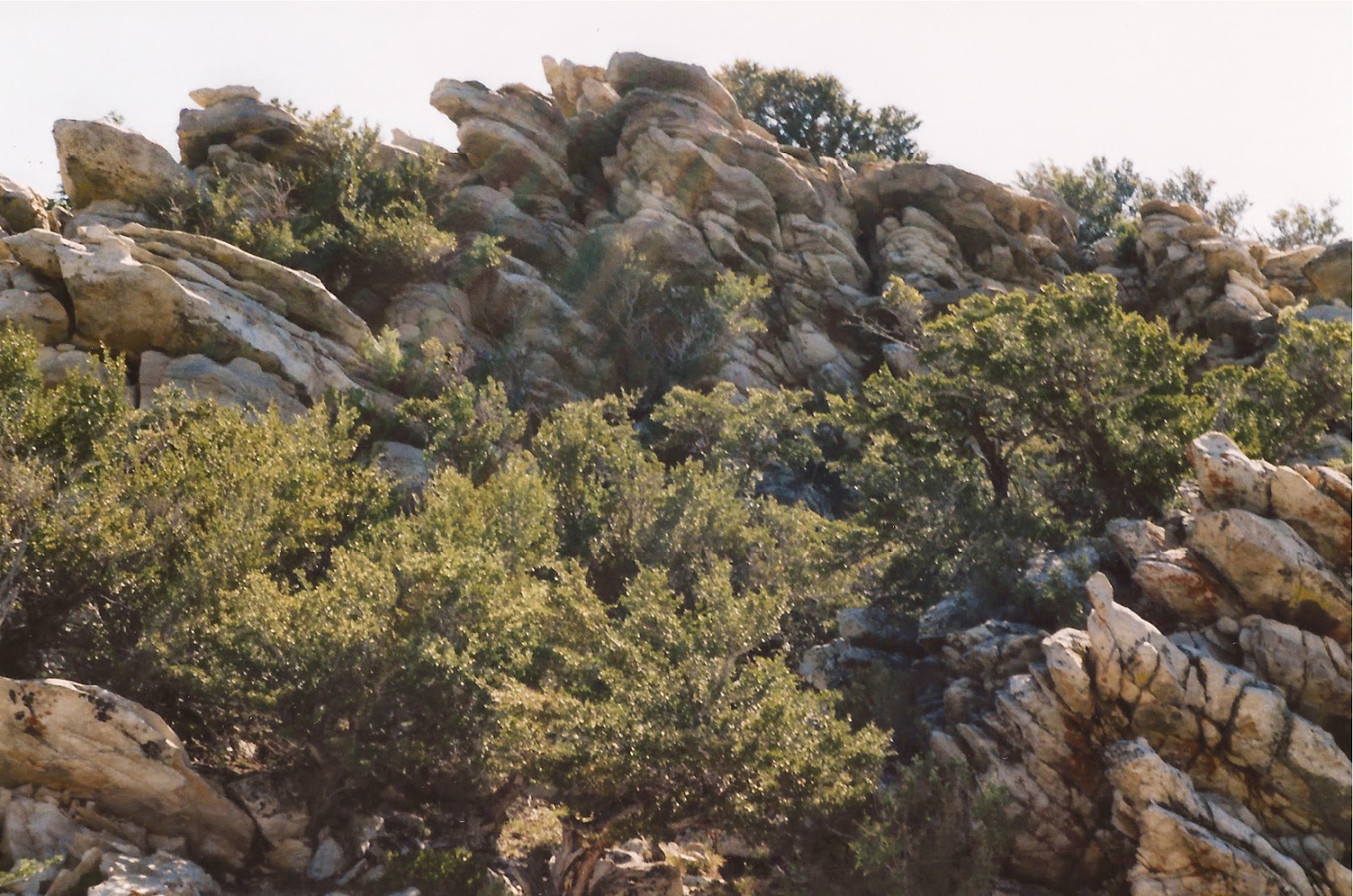 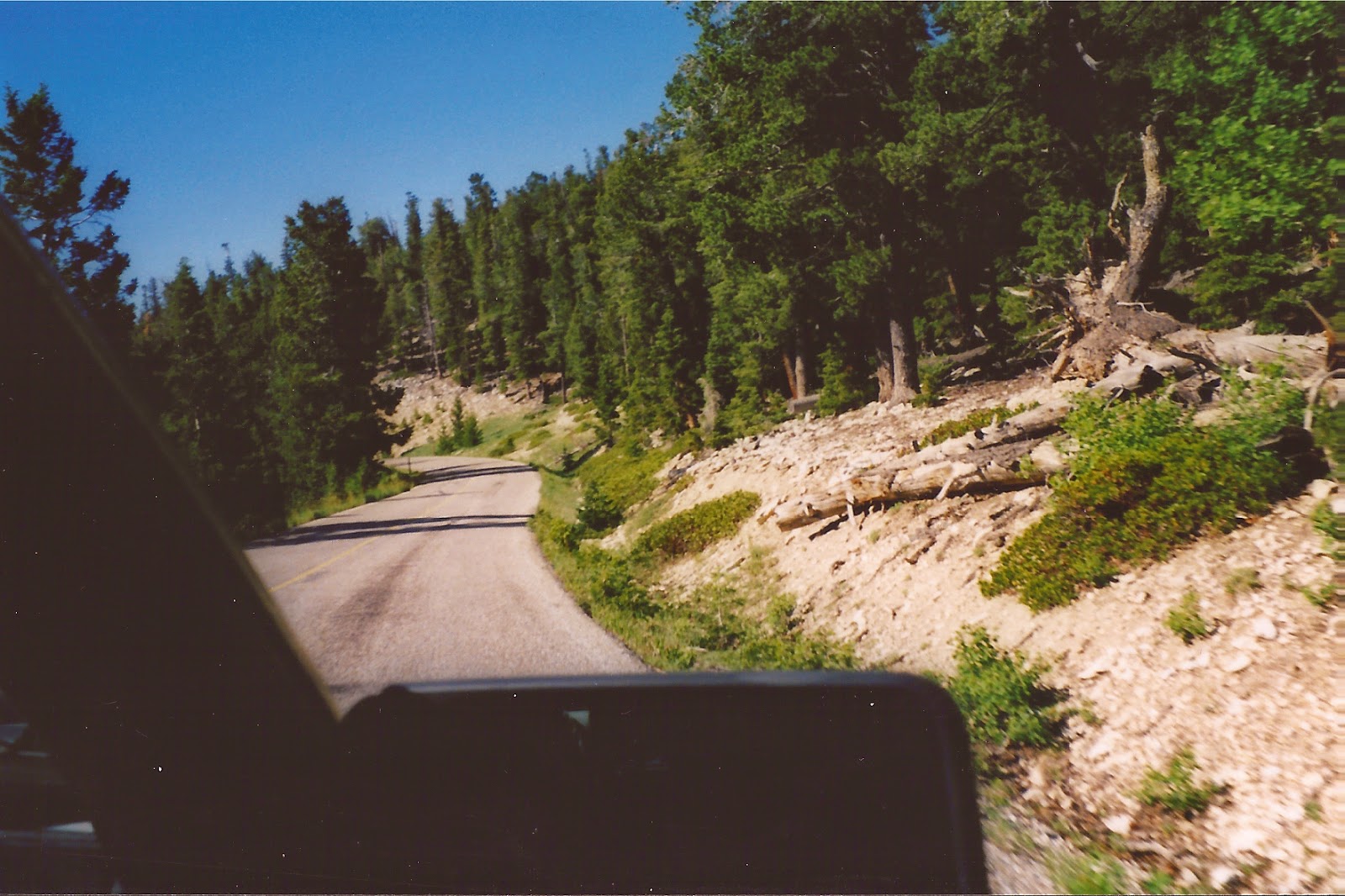 
You really haven't been to Nevada if you haven't been to Las Vegas. Fortunately I remedied that in 2003, when my girlfriend at the time and I were headed from Massachusetts to California for an indefinite stay. Our route took us very close to Vegas, so we decided to make a detour and pay it a visit. The visiting part was easy. The paying part was not.

We had just graduated college and neither of us was working, so budget was a top concern. We managed to book an affordable room at the Riviera via Expedia, which was a new website at the time. When we got there, we figured out why it was so cheap. Vegas hotels are known for their larger-than-life features, but the Riviera hadn't gotten the memo. Apparently Frank Sinatra and company used to stay there. Bland, pinkish run-of-the-mill hotels must have been all the rage back then.

After checking in, we hit the famous Vegas strip, where we walked around and took in the grandeur of it all. Everything there is shiny and attention-grabbing. We visited a few famous casinos, including the one that housed the white bengal tiger that would later maul Roy from Siegfried and Roy. While the sites were captivating, it was really hot, the sidewalks were so crowded it was hard to move, and the numerous advertisers handing out leaflets for strip clubs and hookers added an unappealing air of seediness. We decided to return to the hotel, get some dinner and then head back out for the evening.

Fed and refreshed, we hit the town again. The problem was we only had forty dollars between us to last the evening. That doesn't get you very far in Vegas, as we were about to find out. We started out by hitting a casino. I don't remember which one but remember it being really smokey and full of old people. Vegas, baby!  We sat down at the slots and each pumped five dollars into a machine. This got us absolutely nowhere. We didn't even get a courtesy win out of either machine. Ten dollars down the drain.

We decided we needed a change of scenery, so we hopped in a cab to downtown Las Vegas. The cab ride cost us ten dollars, leaving us with twenty bucks. Downtown Las Vegas is home to the famous neon cowboy sign and is almost as glitzy as the strip, but not quite. There are a ton of bars down there, one of which lured us in with the promise of cheap frozen drinks. We took them up on the offer and scored some drinks served out of long plastic tubes. At five dollars a piece, that left us with ten dollars, just enough for a cab back to the hotel. After some wandering, we headed back, mostly underwhelmed by the experience.

I would love to go back to Vegas again and do it right. Hopefully I'll have a bigger budget next time.


My most recent trip to Nevada came during a family reunion in July of 2010 at the Grand Sierra Resort and Casino on Reno. The hotel was pretty swank, and included things like an arcade, a bowling alley, an adjoined mini-golf course and a few restaurants (including a Port-of-Subs, Mrs. Tires' favorite). 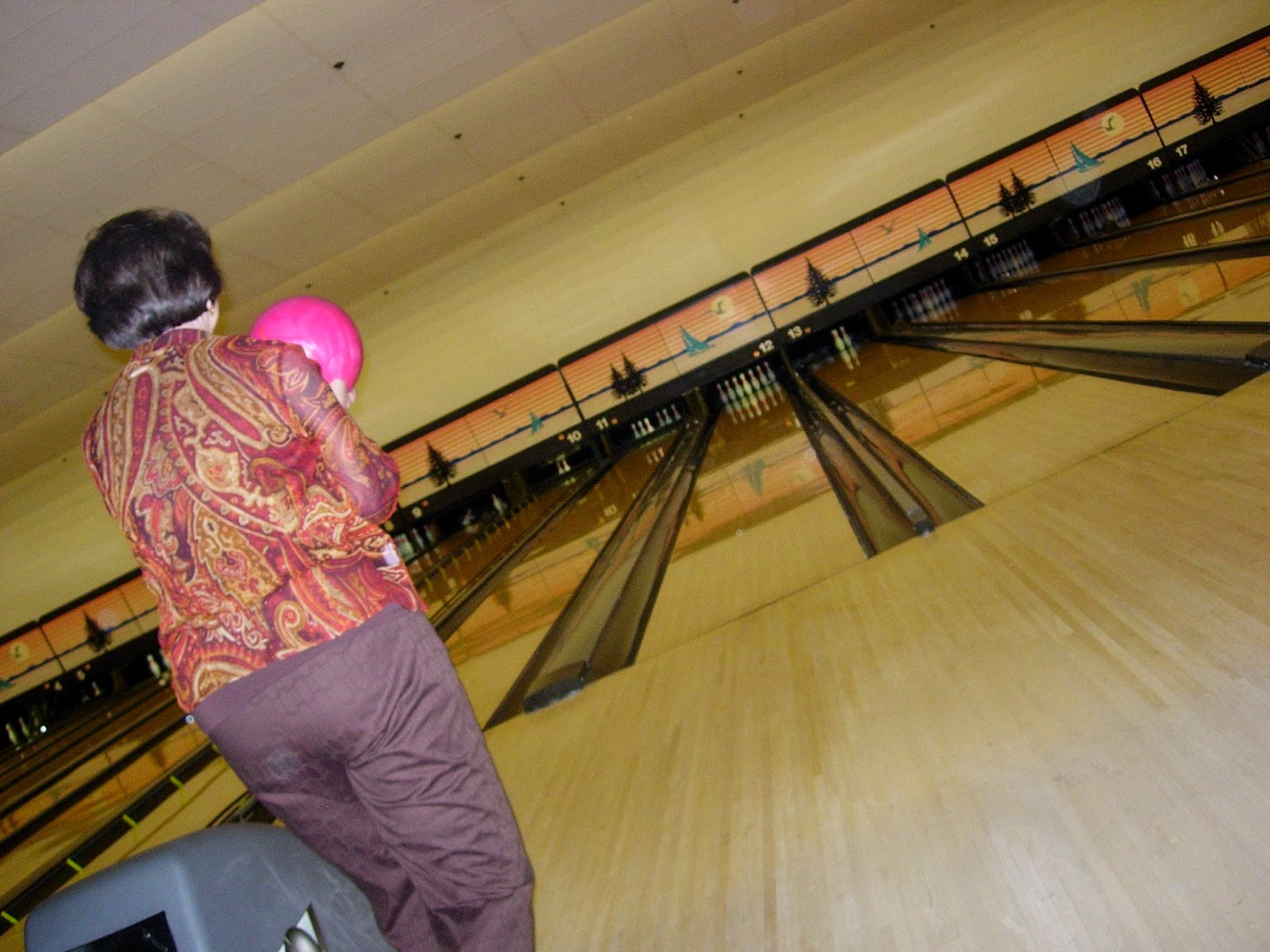 It also had a full casino, where we had half the family around a craps table at one point. I later won eighty dollars on the roulette table by playing my lucky number, 22.

The highlight of the place was the outdoor pool, which was huge, decorated all schmancy and had poolside drink service. 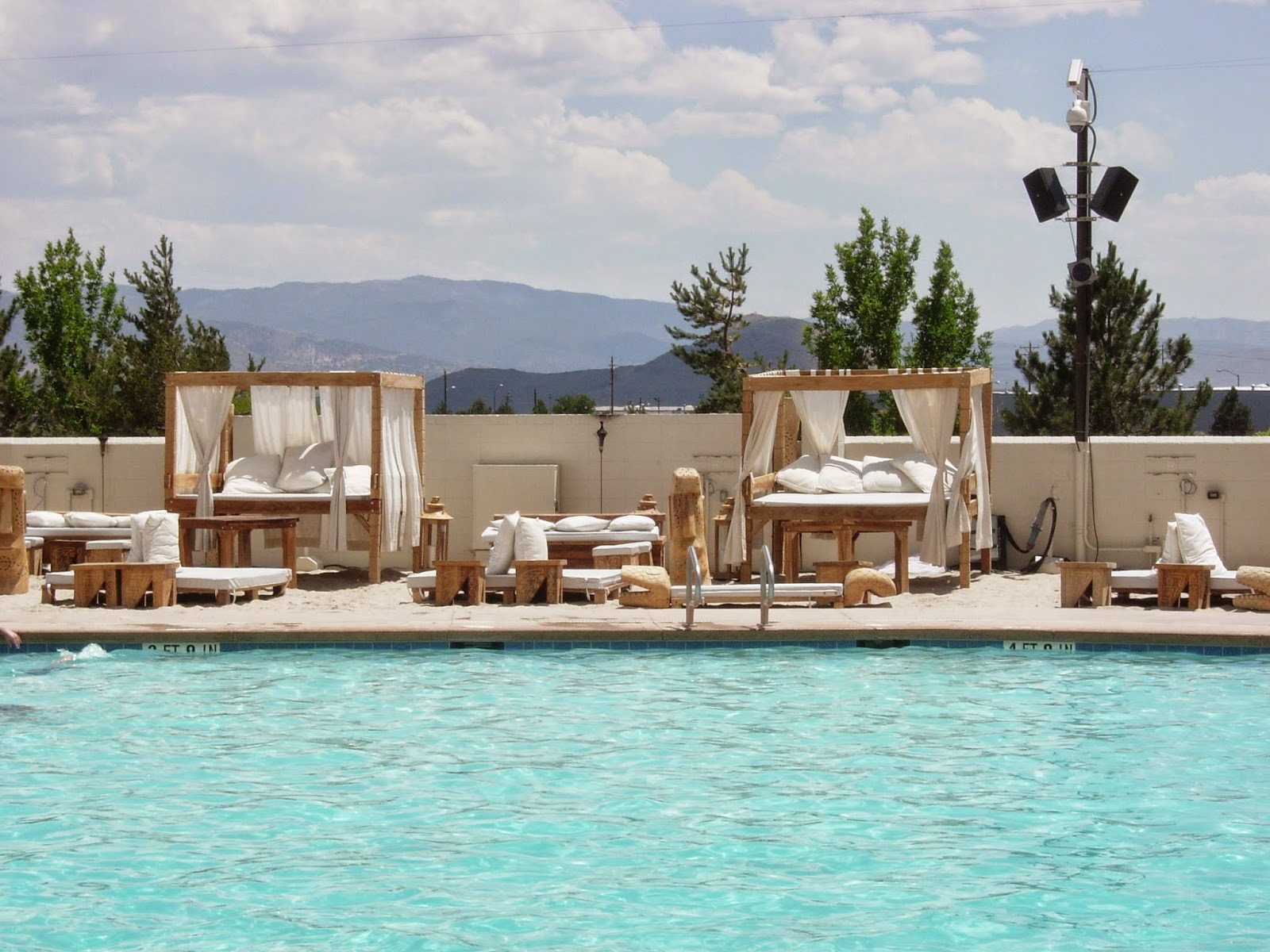 My experience in Reno was limited to the hotel, as we stayed there and didn't leave for the entire three day weekend. One thing I do know about the outside world in Reno: it's hot!