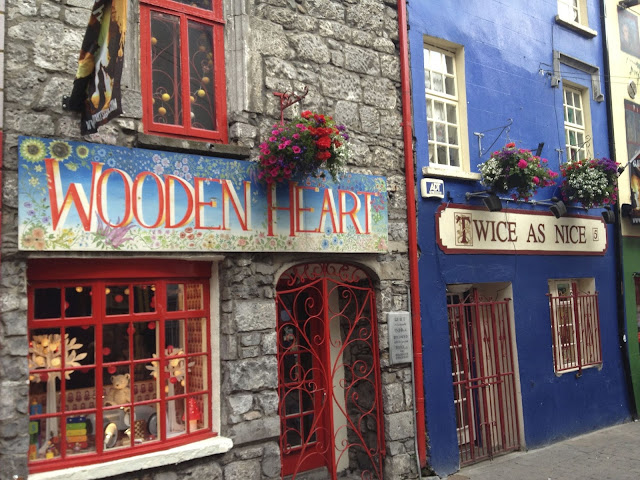 After kicking off our trip to Ireland with a day in Dublin, Mrs. Tires and I woke up the next morning ready to embark on our Great Irish Road Trip. The trek would take us to the other side of the country and back, starting with a stay in Galway. Excitement built up as we packed our things, but some trepidation crept in when we got our rental car. People drive on the left side of the road in Ireland, and the steering wheel is on the right-hand side of the car. That took some getting used to. 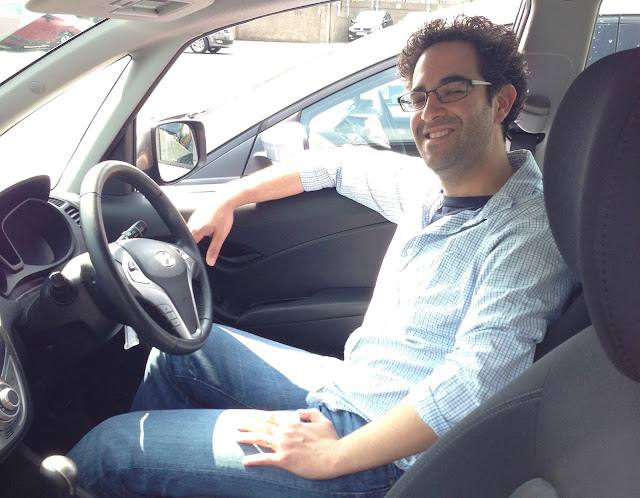 Palpable nerves floated in the air when we started the car and pulled out of the parking lot, but a few well-executed turns alleviated our fear…for a moment. As we entered a roundabout, inefficient signage (not driver error in any way, shape or form) sent us in the completely wrong direction, and before we knew it, we were off course and heading into no man’s land. The mood in the car went into a tailspin, with all the anxiety bubbling up to the surface. After freaking out at each other for a few minutes, we stopped off at the nearest establishment to get directions. The world’s kindest bartender gave us detailed instruction and assured us we’d live to tell the tale of this harrowing misstep.

Before long, we merged back onto the highway and were driving in the right direction. I adjusted quickly to the left side of the road and started enjoying the extra challenge the foreign setup put upon us. I initially hesitated to bring the car up to the speed limit of 120 km/h, but eventually I got more comfortable and started enjoying zipping along in our tiny automobile. Mrs. Tires later revealed to me she never rid herself of the nerves, but at that moment, all was well. We admired the beautiful countryside and ogled the strange signs as we drove. 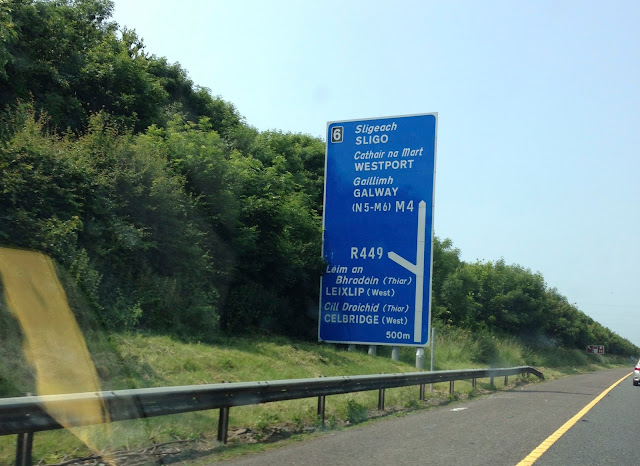 Flipping through the Irish radio stations provided additional entertainment, and that’s how we heard the song Blurred Lines for the first time. The song hadn’t hit the US yet, but it played time and time again on the radio in Ireland, and we heard it about 50 more times on our journey.

After almost three hours of driving, we arrived at our destination, the seaside town of Galway. Intense traffic greeted us, but eventually we made it to the Salthill Hotel, a quaint yet ornate establishment conveniently located near the shoreline. We unpacked and unwound after our drive, and while doing so, I happened upon some literature about the nearby Salthill Promenade. As it turns out, kicking the wall at the end of the promenade was a time-honored Galway tradition. I kept looking for some sort of reason this ritual existed (such as bringing good luck, or punishing terrible wrongdoing the wall once committed) but found nothing. Nevertheless, I’m not one to buck a sacred ritual, so I convinced Mrs. Tires to get ready, and off we went to kick the wall. 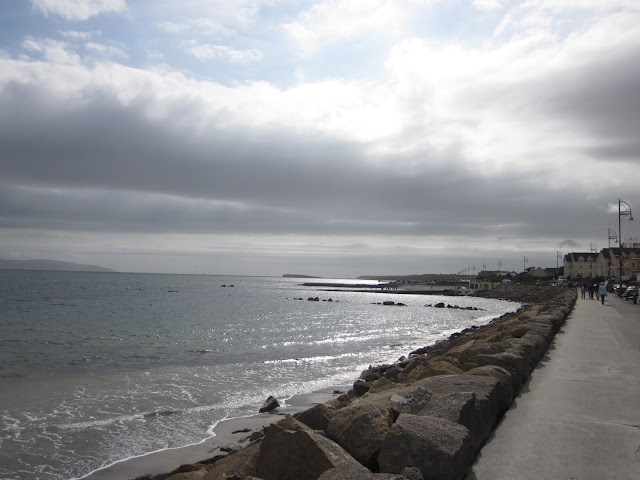 The promenade impressed, with the ocean serving as the backdrop. A huge public diving board punctuated the shoreline, and people leaped off of it despite the chilly temperatures. Interesting characters acted as ornaments to the attraction. 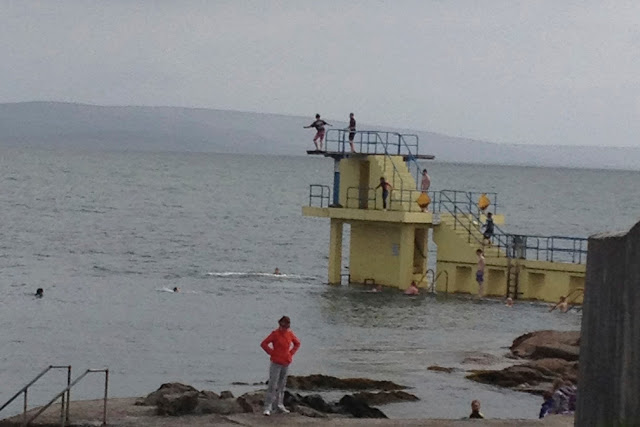 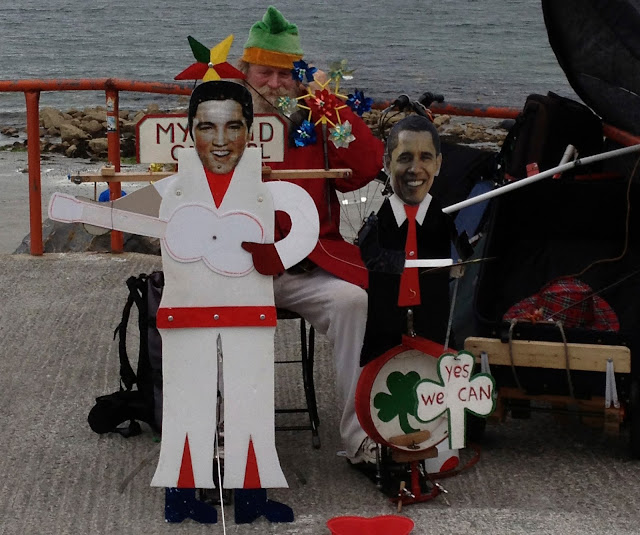 At the end of the promenade sat an ordinary stone wall. We each gave the wall a good kick, and laughed heartily in the process. 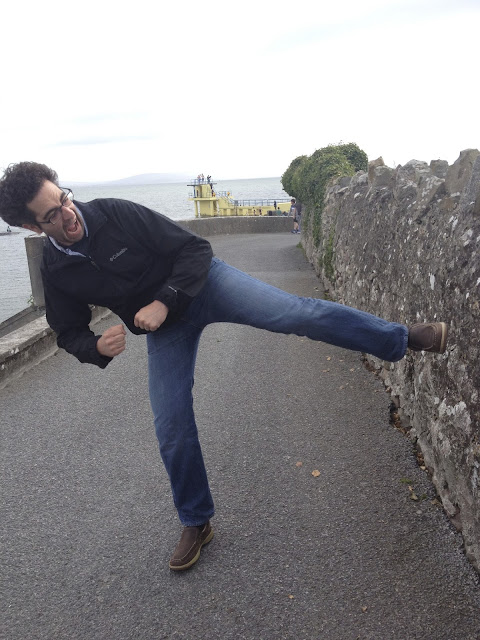 From there, we stopped at a local donut shop for a treat, then took a long walk to the center of Galway. Downtown Galway centered around Quay street, and consisted of a series of narrow streets lined with pubs, shops and restaurants. We spent the rest of our day wandering around that area, checking out the shops and popping into intriguing pubs for a pint. The stroll provided plenty of charm, though it was a bit cramped, with narrow streets and lots of fellow tourists. 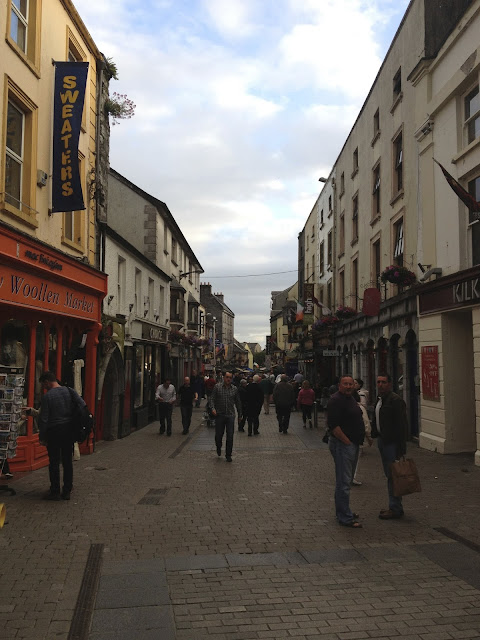 Our stroll eventually took us to the King’s Head Pub, a restaurant, pub and music venue that managed to feel both cozy and cutting-edge. We started with a plate of oysters, and they instantly became a favorite of ours, partially because of the tangy sauce on the side. We slurped our last oysters just as the live band started playing downstairs, so we joined the excited crowd and rocked out. We were hoping for some traditional Irish music, but the contemporary rock band provided a welcome alternative. They played hard all night and kept the crowd dancing. The Kings Head also poured us our first pints of an oddly named pale ale - the Galway Hooker. This smooth and tasty beer’s name drew inspiration from the hooker ships that frequented Galway. I amused myself to no end by approaching the bar and slyly stating, “Two hookers, please.” After enjoying several hookers (never gets old!), we called it a night. The King’s Head perfectly capped our first day in Galway.

In my opinion, no vacation is complete without some mini-golf. So when I saw a mini-golf course near our hotel, I knew it would be the perfect way to start our second day in Galway. After another stop at the delicious coffee and donut shop close by, we walked over to Leisureland for a game. It rained a bit while we played, but we had a great time regardless, and I won, which is always a bonus! 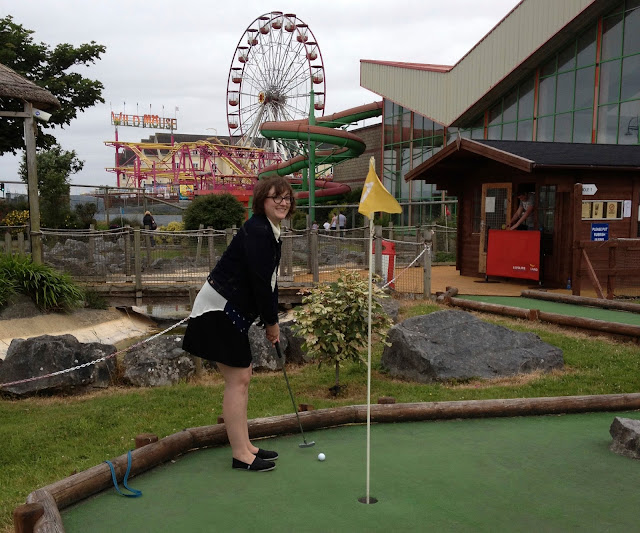 Rain continued to sprinkle down on us as we handed in our putters, so we took a bus into town to continue our exploration of Galway's main drag. On our way, we passed the village of Claddagh, home of the claddagh ring. Mrs. Tires loves her claddagh ring, so she was delighted to be near its origin. The sighting inspired us to seek out the Claddagh Ring Museum, located in Galway proper. I was surprised to hear of a whole museum dedicated to this type of ring, and it turned out my skepticism was justified. It was less a museum and more a ring store with a couple of display cases. We were in and out of there in less than five minutes. 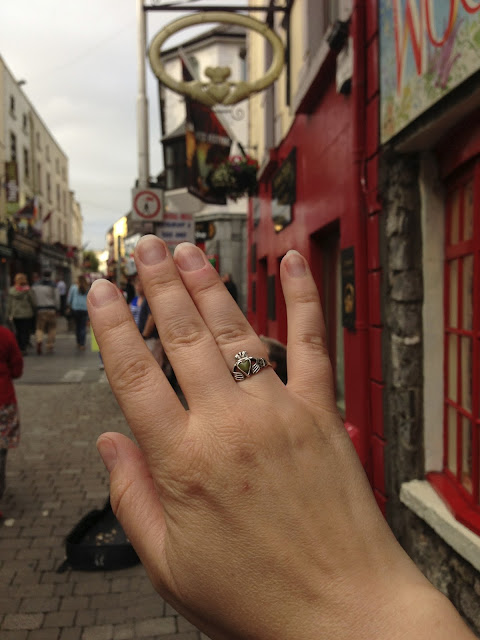 Our wanderings continued, and we caught glimpses of the Spanish Arch and the Christ of King Church as we strolled. This worked up quite the appetite, so we moseyed on over to McDonagh’s, a famous order-at-the-counter-style eatery that supposedly served some of the best seafood in Galway. You wouldn’t know it from the fish and chips I ordered, which was passable at best. McDonagh’s disappointed, and I can’t recommend it.

We weren’t deterred by the lackluster museum and the subpar food, and our spirits were lifted when we figured out how to work some traditional Irish music into our day. Tig Coili, a quaint little pub in the center of town, featured live music every day and served as a hangout for local musicians. Even in early afternoon, the place was packed. The setup was more casual than I expected, with the musicians sitting around a table instead of standing up on a stage. Nonetheless, the music was upbeat and pleasant, and we beamed as we listened to the gleeful singing and strumming. We also struck up a conversation with a kind family from the States, and we exchanged tales about driving around Ireland and all over the world.

We finished our pints at the end of the session and headed over to another well-known Galway establishment, the cleverly named Dew Drop Inn. This famous pub was small to the point of being cramped, and the crowd was decidedly older, so we downed a pint, snapped a photo, and moved on. 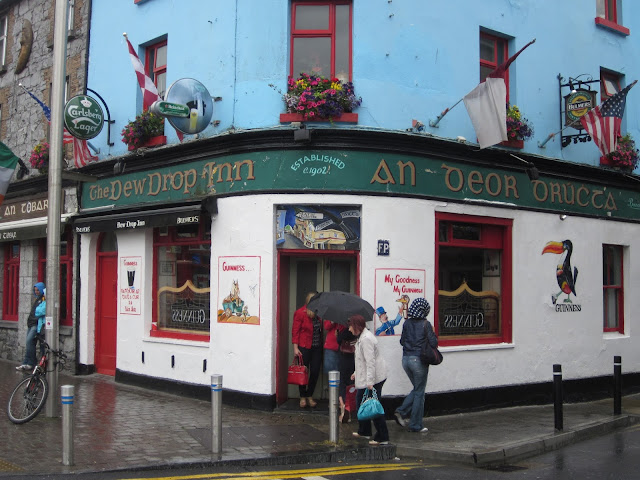 On and on we wandered. At one point, we stumbled upon the Oscar Wilde statue and the park that flanked the downtown area.

Before we knew it, it was approaching nine o'clock, so we searched the town for a kitchen that was open late, and eventually we found a fancy wine bar called Martine’s on Quay Street. We got an unexpectedly delicious meal, including a huge, juicy burger. While we sat at our outdoor table and looked back on our day, we came to the conclusion that we had sufficiently explored Galway and were ready to call it a night. While we enjoyed our time wandering Galway, it underwhelmed. We questioned what brought us there in the first place. While we were glad we made the trek, neither of us felt we'd have to go back, and we agreed that it wasn't an essential stop on the Great Irish Road Trip.

By all accounts, the bus should have been running at that time, but we waited at the bus stop for quite a while and there was no sign of it. A local about our age named Peter sat waiting for the bus as well. We commiserated on the bus’ tardiness, then got to introducing ourselves and chatting away. As the prospect of a bus showing up faded into the evening, we decided to split a cab. During our cab ride, Peter invited us to meet up with his friends at a bar called O’Conner’s Famous Pub. We gladly accepted.

We instantly fell in love with O'Conners. Its lively vibe was perfectly complimented by its decor, which consisted of wall-to-wall artifacts such as  decked-out lamps, wooden barrels, wagon wheels, and many more eclectic objects. We especially loved the fishing nets with fake clam shells strewn from the ceiling. Our new friends were wonderful company. We met Pia and Masha, both of whom were from Slovenia. As we discussed our travel plans with them, we discovered Pia and Masha were going where we were going the next day. After ensuring our safety by looking them in the eye and asking them if they were serial killers, we agreed to give them a lift to the Cliffs of Moher. We drank and laughed late into the night.

We weren’t sure whether Pia and Masha would actually join us the next morning, but, sure enough, they hopped into our rental car bright and early, accompanied by some cupcakes from Pia’s bakery. Off we went to the Cliffs of Moher. 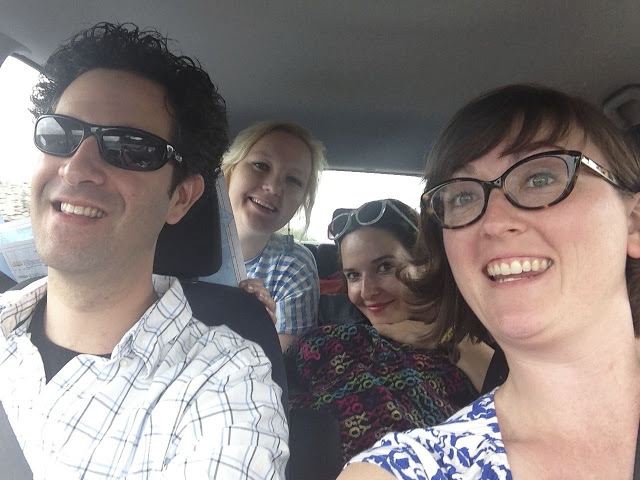 Coming Soon: Ireland, Part 3: The Cliffs of Moher and the Dingle Peninsula 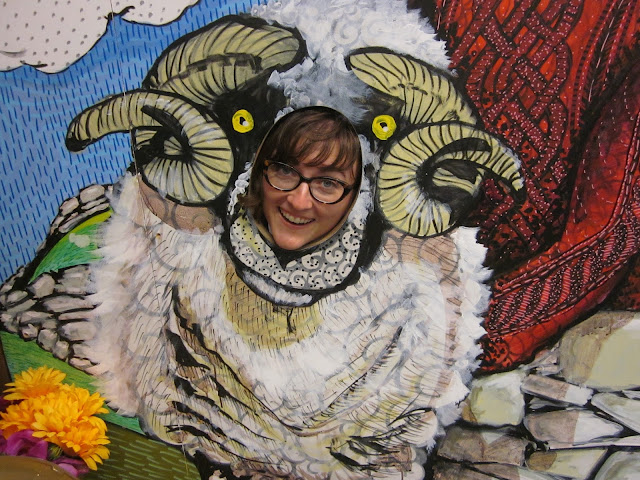